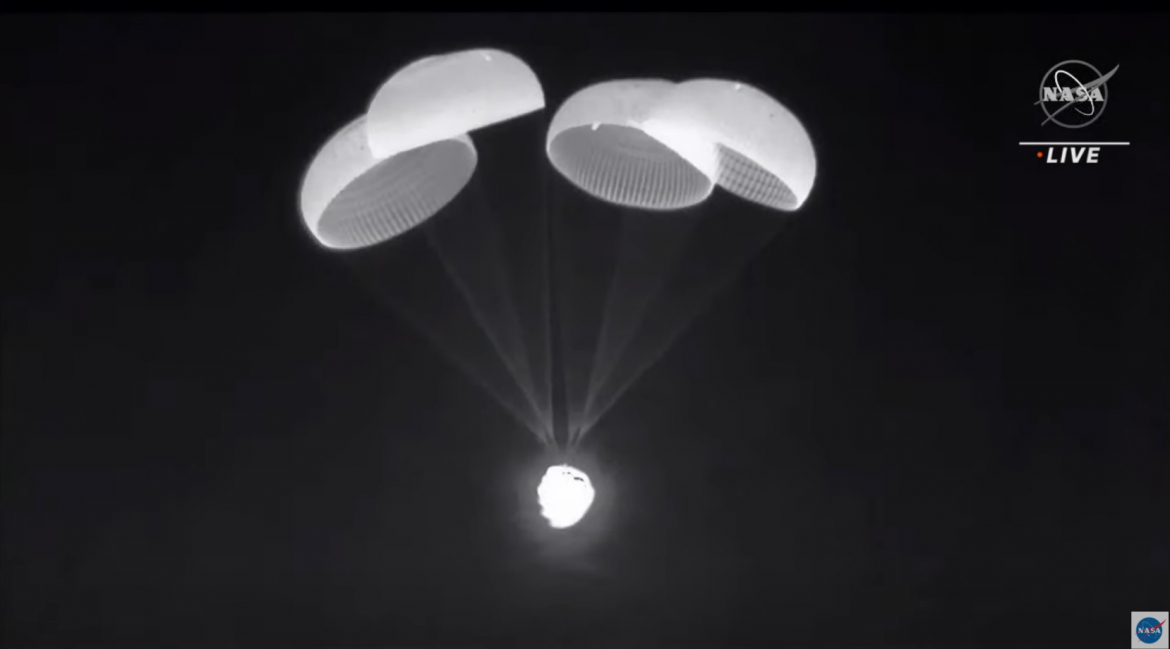 NASA and SpaceX teams has completed the safe return of the Crew-2 mission from the International Space Station (ISS) with four astronauts on board. Crew Dragon Endeavour undocked from the ISS at 2:05 p.m. EST (19:05 UTC) Monday, with a splashdown in the Atlantic Ocean at 10:33 p.m. EST.

Crew-2’s mission began with a launch to the ISS atop a SpaceX Falcon 9 rocket on April 23. Crew Dragon Endeavour docked to the ISS the following day. The splashdown of Endeavour concluded a 199-day mission at the ISS for the Crew-2 astronauts.

The astronauts aboard Crew-2 are NASA’s Shane Kimbrough and Megan McArthur, Thomas Pesquet of the European Space Agency (ESA) and Akihiko Hoshide of the Japanese Aerospace Exploration Agency (JAXA). Following their arrival at the ISS in April, the Crew-2 astronauts joined the Expedition 65 crew aboard the station.

It’s been a fantastic ride and now we’re ready to go home and reunite with our loved ones. I couldn’t have hoped for better crewmates, or better people fly to space with. I told them on the launchpad, and it's unchanged after 6 months in a tin can 24/7! Go #Crew2! #friendsforlife pic.twitter.com/TQ3pVUsZFF

Endeavour was the Crew Dragon to first ferry humans to orbit under NASA’s Commercial Crew Program when it launched NASA astronauts Doug Hurley and Bob Behnken on the Demo-2 mission in May 2020. As such, Crew-2 marked Endeavour’s second trip to space and the ISS — making Crew Dragon the first fully reusable crew capsule to be developed.

Crew Dragon spacecraft are named by the first crew to fly them into orbit. As such, Hurley and Behnken named Crew Dragon C206 Endeavour in honor of Space Shuttle Endeavour, the spacecraft that both astronauts made their first flight to space in.

Crew-2 initially docked to the forward-facing International Docking Adapter 2 (IDA-2) docking port attached to the ISS’s Harmony module. However, to make way for the then-planned NASA/Boeing Starliner Orbital Flight Test 2 (OFT-2) mission, the crew of Crew-2 entered Endeavour and relocated to the IDA-3 zenith (upward-facing) docking port in July. Endeavour has remained docked at IDA-3 since this maneuver was completed, and it is from here that it departed on Monday. 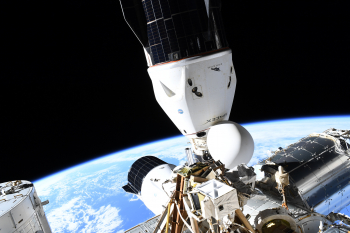 Additionally, a go/no-go poll was conducted by NASA and SpaceX teams. Once given the “go” for undocking, Endeavour undocked from the ISS.

After performing several planned departure burns, Endeavour began a fly-around maneuver to photograph the exterior of the International Space Station. At the conclusion of the fly-around, Crew Dragon Endeavour coasted in orbit for eight hours. During the coast phase, NASA and SpaceX teams closely monitored weather conditions at the primary and secondary splashdown locations.

A primary splashdown location is selected by NASA and SpaceX teams out of seven possible locations in the hours leading up to undocking. Weather conditions at that location are a factor in the final go/no-go decision for undocking, jettisoning Dragon’s trunk compartment, and the deorbit burn. If conditions at the chosen site are not acceptable, NASA and SpaceX would have “waved off” any of those events and Endeavour would remain in orbit while NASA and SpaceX established a new return date. 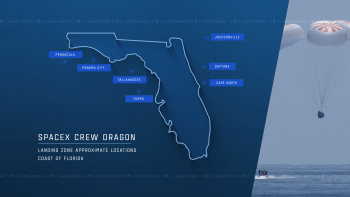 Finally, the sea must not be so rough as to impede recovery operations, so the relationship between wave height and period will be monitored and if they are too close together, or the wave slope exceeds seven degrees, reentry will not proceed.

Weather at the landing site does not just affect Dragon’s operations, as helicopters will be in operation to support recovery. This will be subject to its own weather constraints, requiring a cloud ceiling of no less than 500 feet, at least half a mile of visibility for daytime operations and one mile at night, and no more than four degrees of pitch or roll motion for taking off from or landing on ships.

Approximately an hour and 20 minutes before the planned splashdown,  Endevaour jettisoned its unpressurized trunk cargo module. The Trunk houses vehicle systems such as the solar panels and can also carry unpressurized cargo up to the ISS, although nothing was carried up during Crew-2’s launch.

After the completion of the deorbit burn, Dragon’s protective nosecone closed, protecting Endeavour’s hatch, docking system, and thrusters from the intense re-entry conditions.

Endeavour then began its re-entry into Earth’s atmosphere. During re-entry, NASA and SpaceX teams experience a communications blackout period from Endeavour due to the envelope of 1,930° C ionized air surrounding the spacecraft. Communication with Endeavour and her crew was regained once the capsule passes through this region.

Following the conclusion of atmospheric re-entry, Endeavour’s drogue chutes deployed, starting the sequence of parachute deployments used to slow the spacecraft to an acceptable velocity for splashdown.

Four main parachutes deployed 30-60 seconds after the drogue chutes, slowing Endeavour to a safe velocity. One of the four main parachutes was observed inflating later than the other three – not a risk to crew safety, but a possible item of interest for post-flight analysis.

NASA and SpaceX are working closely with the United States Coast Guard to establish a safety zone around the expected recovery area. Two SpaceX recovery ships, GO Navigator and GO Searcher, are stationed in the Gulf of Mexico and the Atlantic Ocean respectively to support Dragon recovery efforts following splashdown. 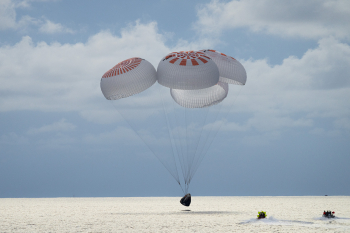 On its return to Earth, Crew-2 carried 240 kilograms (530 pounds) of scientific investigations, hardware, and experiments aboard Endeavour. Some of these experiments are removed in the immediate hours following splashdown and crew egress, while others remain in the spacecraft until it returns to Port Canaveral.