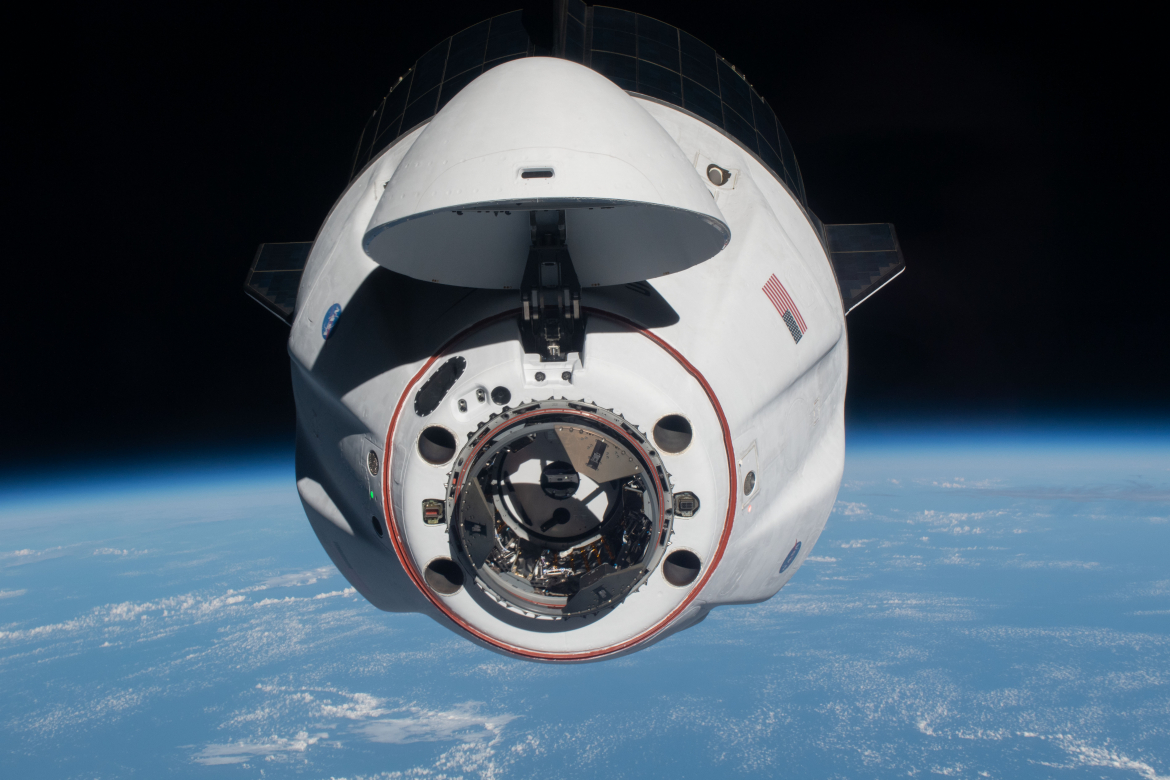 Crew Dragon Endurance docked to the International Space Station (ISS) at 6:32 PM EST (23:32 UTC) following 22 hours of free flight after launching from the Kennedy Space Center on Wednesday, delivering the Crew-3 contingent to the station.

The astronauts of Crew-3 consist of Raja Chari (Commander), Thomas Marshburn (Pilot), and Kayla Barron (Mission Specialist 2) from NASA as well as Matthias Maurer (Mission Specialist 1) of the European Space Agency (ESA). Marshburn is the only member of the crew with previous flight time, having flown on two previous missions: STS-127 onboard Shuttle Endeavour and Soyuz TMA-07M.

Endurance and her crew lifted off from Launch Complex 39A at NASA’s Kennedy Space Center on Wednesday, November 10 at 9:03 PM EST on a Falcon 9 rocket. The Falcon 9 for the mission, B1067-2, later landed on SpaceX’s newest autonomous spaceport drone ship, A Shortfall Of Gravitas, stationed downrange off the coast of the Carolinas in the Atlantic Ocean.

Around eight minutes after liftoff, the second stage Merlin 1D Vacuum-optimized engine was shut down, in a milestone known as Second Engine Cut Off (SECO). At 9:15 PM EST, Crew Dragon Endurance separated from the Falcon 9 second stage.

A minute later, the nosecone on Endurance opened, revealing Draco thrusters and the docking system. The nosecone onboard Endurance was flown on a previous Dragon 2 flight.

At 9:50 PM EST, the four Draco thrusters, located near the docking interface, fired for the Phase burn. This burn raised the spacecraft’s orbit from its initial insertion orbit.

Endurance has 16 Draco thrusters that provide 16 pounds-force per thruster and run on monomethylhydrazine (MMH) and dinitrogen tetroxide (NTO), a hypergolic combination of propellants.

Crew-3 is the first flight for Crew Dragon Endurance (C210), which is the third Crew Dragon in the active SpaceX fleet, joining Endeavour (C206) and Resilience (C207).

The name Endurance for capsule C210 was announced by Chari in a NASA press conference on October 7. The capsule has the same name as the Norwegian ship Endurance that carried Sir Ernest Shackleton and his expedition party as a part of the Imperial Trans-Arctic Expedition. The Norwegian ship sank in the Weddell Sea in the Southern Ocean off Antarctica in November of 1915 after being crushed by ice.

The crew of Expedition 66 onboard the ISS, including NASA astronaut Mark Vande Hei and Roscosmos cosmonauts Anton Shkaplerov and Pyotr Dubrov, began their day after a scheduled rest period around 1:00 AM EST on November 11. Vande Hei and Dubrov arrived at the ISS on Soyuz MS-18, while Shkaplerov, who is in command of the ISS, arrived on Soyuz MS-19. 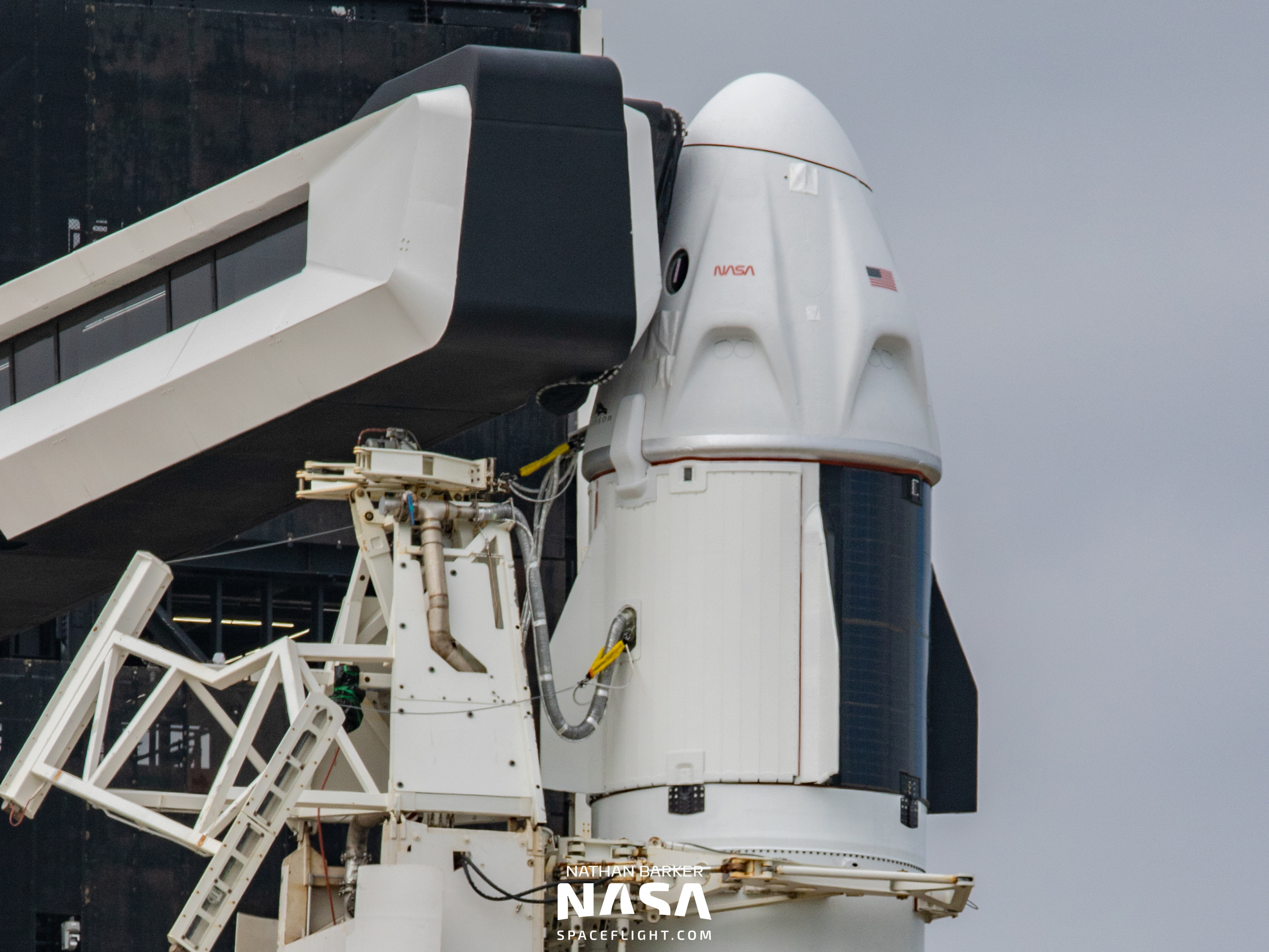 Crew Dragon Endurance sits atop the Falcon 9 rocket prior to launch. Credit: Nathan Barker for NSF/L2

The three-person crew on the ISS then began their preparations for the arrival of Crew Dragon Endurance.

The second maneuver for Endurance after reaching orbit, called the Boost Burn, took place just over seven hours after liftoff, allowing Endurance to slowly catch up with the ISS. About an hour later, the Close Burn occurred.

Around 6:00 AM EST, the four-person crew began their sleep period, which ended around 2:00 PM EST.

After the Transfer Burn early Thursday afternoon, Dragon was running approximately 40 minutes ahead of the pre-launch timeline, and the remaining burns were replanned and the new times relayed up to the crew. The Coelliptic Burn then brought Dragon into an orbit 2.5 kilometers lower than the ISS’s.

Mission controllers at both SpaceX in Hawthorne, CA, and NASA in Houston, TX, then gave the Go decision for the spacecraft to perform the Approach Initiation Burn. Following the “Go” decision, the spacecraft performed the burn at 5:06 PM EST / 22:06 UTC. At that point, Endurance was at a distance of 7.5 kilometers and closing, and the spacecraft will be situated both behind and below the station. 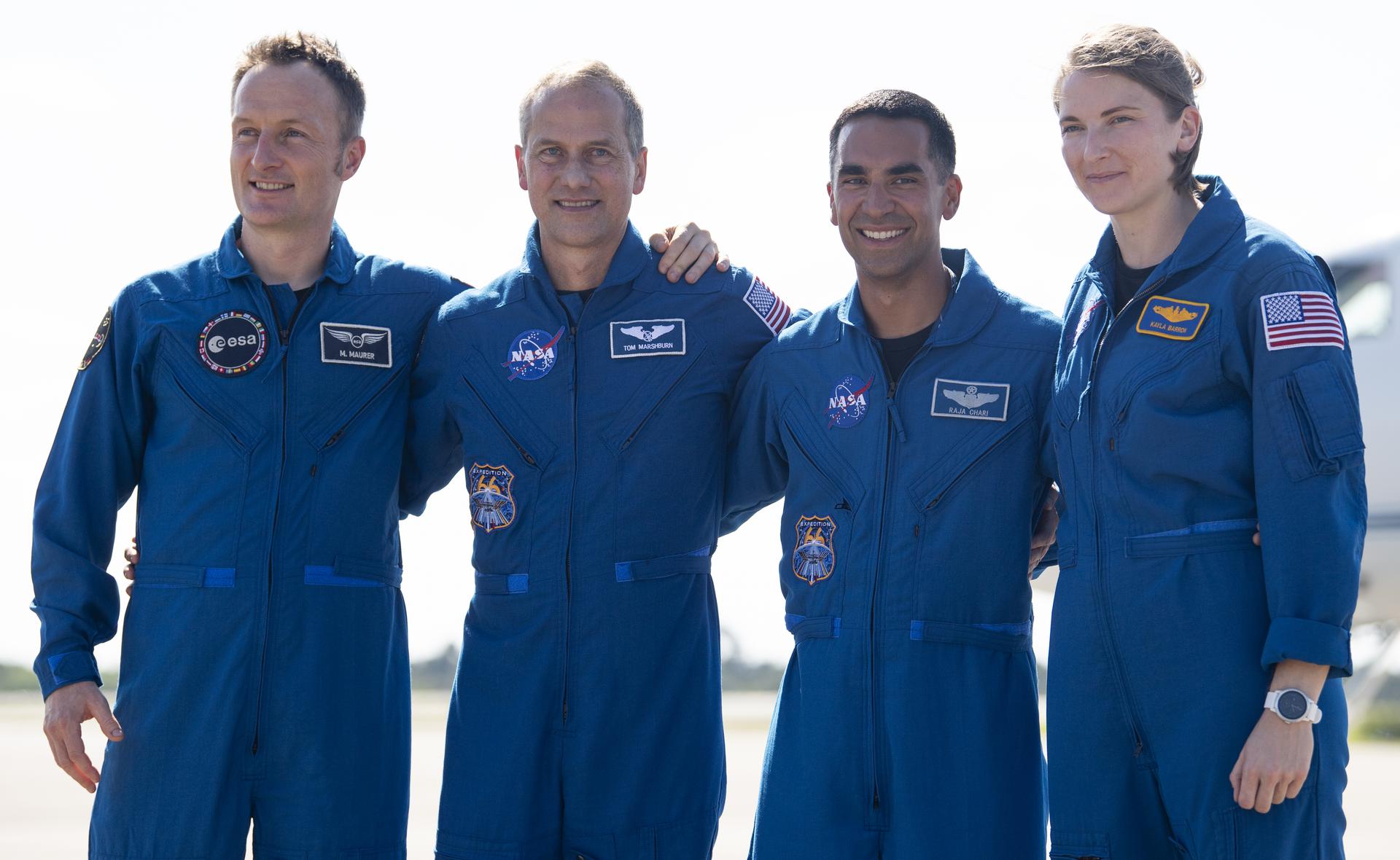 The crew of the Crew-3 mission during their arrival at NASA’s Kennedy Space Center. Credit: NASA

Endurance then performed another burn, known as the Approach Initiation Midcourse Burn. Seven minutes later, the Dragon had reduced its distance to the station to one kilometer.

Mission controllers then took a Go/No-Go decision to allow Endurance to approach Waypoint 1. After being given the “Go” decision, Endurance proceeded on with the approach and entered the Keep Out Sphere.

The spacecraft then arrived at Waypoint 0, passing by without stopping due to a near perfect trajectory.

Dragon arrived in front of the ISS on the docking axis 220 meters away from the station and then arrived at Waypoint 2 located 20 meters in front of the forward port on the Node-2/Harmony module about 10 minutes before scheduled docking.

Endurance then held there until for better lighting conditions for the automated docking system.

Just before docking, the spacecraft entered the Crew Hands Off Point (CHOP), which meant the crew could no longer trigger an abort due to the proximity of the spacecraft to the station.

The spacecraft docked to International Docking Adaptor-2 (IDA-2), which is attached to the Pressurized Mating Adaptor-2 (PMA-2), on the Harmony module at 6:32 PM EST / 23:32 UTC. Thirteen minutes later, the hooks will close between the spacecraft and IDA-2.

With Crew Dragon Endurance docked to the space station, pressure and leak checks will occur to ensure a perfect seal. During this operation, the crew of Endurance will remove their SpaceX spacesuits.

Just less than two hours after docking, the hatches on both Endurance and PMA-2 will be opened and the current Expedition 66 crew and the Crew-3 crew will greet each other.

Both Crew-2 and Crew-3 crews were supposed to have a direct handover between their respective missions on the ISS, but launch delays caused Crew Dragon Endeavour and the Crew-2 crew to arrive back to Earth on November 8.

Expedition 66 is scheduled to conclude in March of 2022. Endurance and Crew-3 will remain on the ISS for a long-duration stay until April 2022.