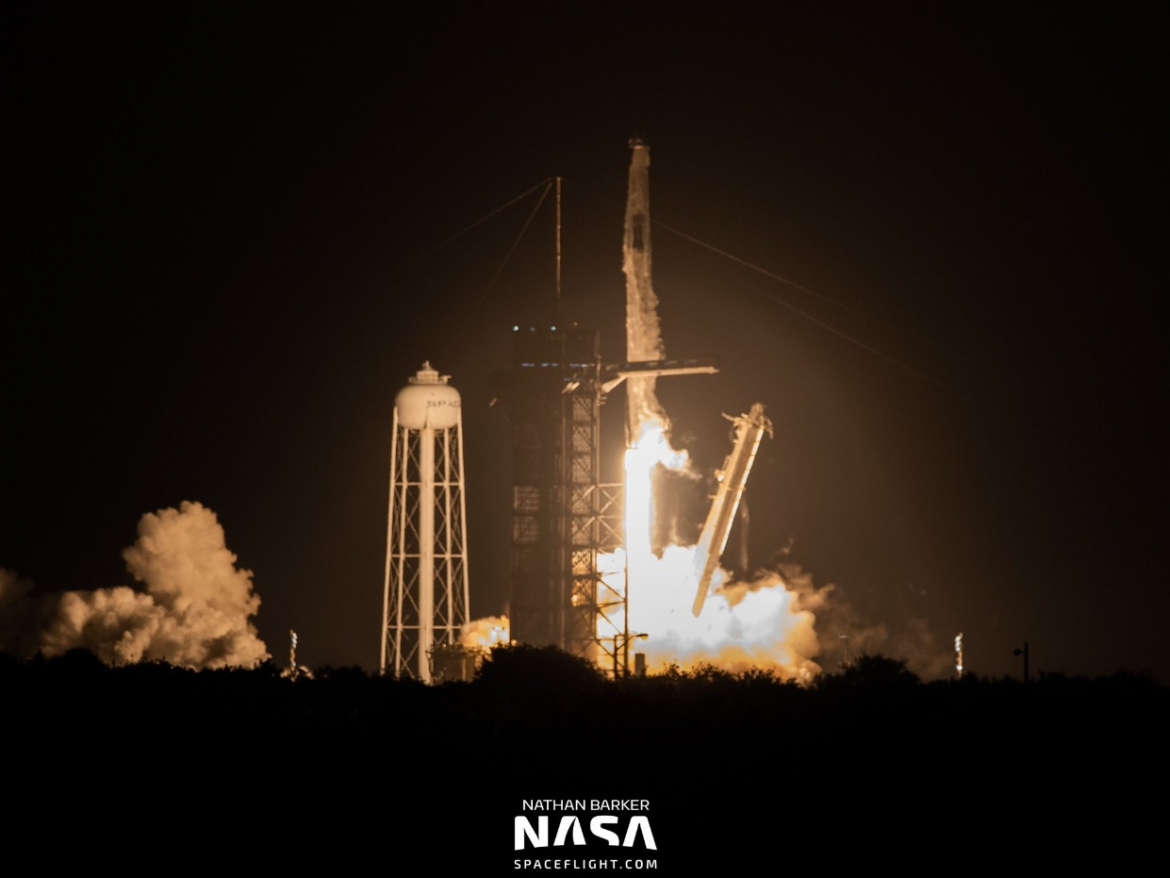 SpaceX and NASA have successfully launched four astronauts to the International Space Station on the Crew-3 mission. The crew took flight onboard a Falcon 9 and Crew Dragon Endurance from Kennedy Space Center’s Pad 39A Wednesday evening, November 10, at 9:03 PM EST (02:03 UTC on November 11).

At the station, the four will spend approximately six months onboard as part of Expedition 66/67. They will take the places of the four Crew-2 astronauts, who safely returned to Earth on November 8.

On its maiden flight, Crew Dragon Endurance (C210) carries a crew of four astronauts – three Americans and one German. The mission also features a rare assignment – a commander without previous spaceflight experience. In fact, all but one member of Crew-3 have never flown to space before.

The flight is commanded by astronaut Raja Chari, 44, of Cedar Falls, Iowa. Chari was a USAF test pilot before being chosen as part of NASA’s Group 22 astronaut class in 2017. He is also a member of the “Artemis Team,” a group of astronauts eligible for selection on future crewed lunar missions.

A graduate of the U.S. Air Force Academy, Chari also holds a Master’s degree in Aeronautical and Astronautical Engineering from MIT. He commanded the 461st Flight Test Squadron at Edwards AFB in California before his astronaut selection. Crew-3 marks Chari’s first spaceflight.

A native of Statesville, North Carolina, and a graduate of Wake Forest University’s medical school, Marshburn is a physician who also served as a flight surgeon before his astronaut selection in 2004. He has also conducted four spacewalks previously, including an unplanned EVA to fix a pump controller box that was involved in an ammonia leak.

Astronaut Kayla Barron, 34, of Richland, Washington was one of the first women to serve as a US Navy submarine warfare officer. She served aboard the USS Maine before being chosen as part of the Group 22 astronaut class in 2017 alongside Raja Chari.

Like Chari, she is part of the “Artemis Team” and is making her first spaceflight. She is also trained as a nuclear engineer with a degree from England’s Cambridge University and is the fifth female U.S. Naval Academy graduate to be selected into NASA’s astronaut corps.

European Space Agency (ESA) astronaut Matthias Maurer, 51, born in Sankt Wendel, Saarland, Germany, is a materials scientist who was inducted into the ESA astronaut corps in July 2015. He worked as a crew support engineer on the Columbus flight control team and also took part in the ESA CAVES spaceflight analog simulation before his selection.

After his selection, he took part in the NEEMO 21 underwater spaceflight analog in Florida, as well as sea survival training in China alongside Chinese taikonauts. Maurer is also certified to conduct EVAs outside ISS using the U.S. spacesuit. Like Chari and Barron, this is Maurer’s first flight in space, and his mission is named “Cosmic Kiss.” 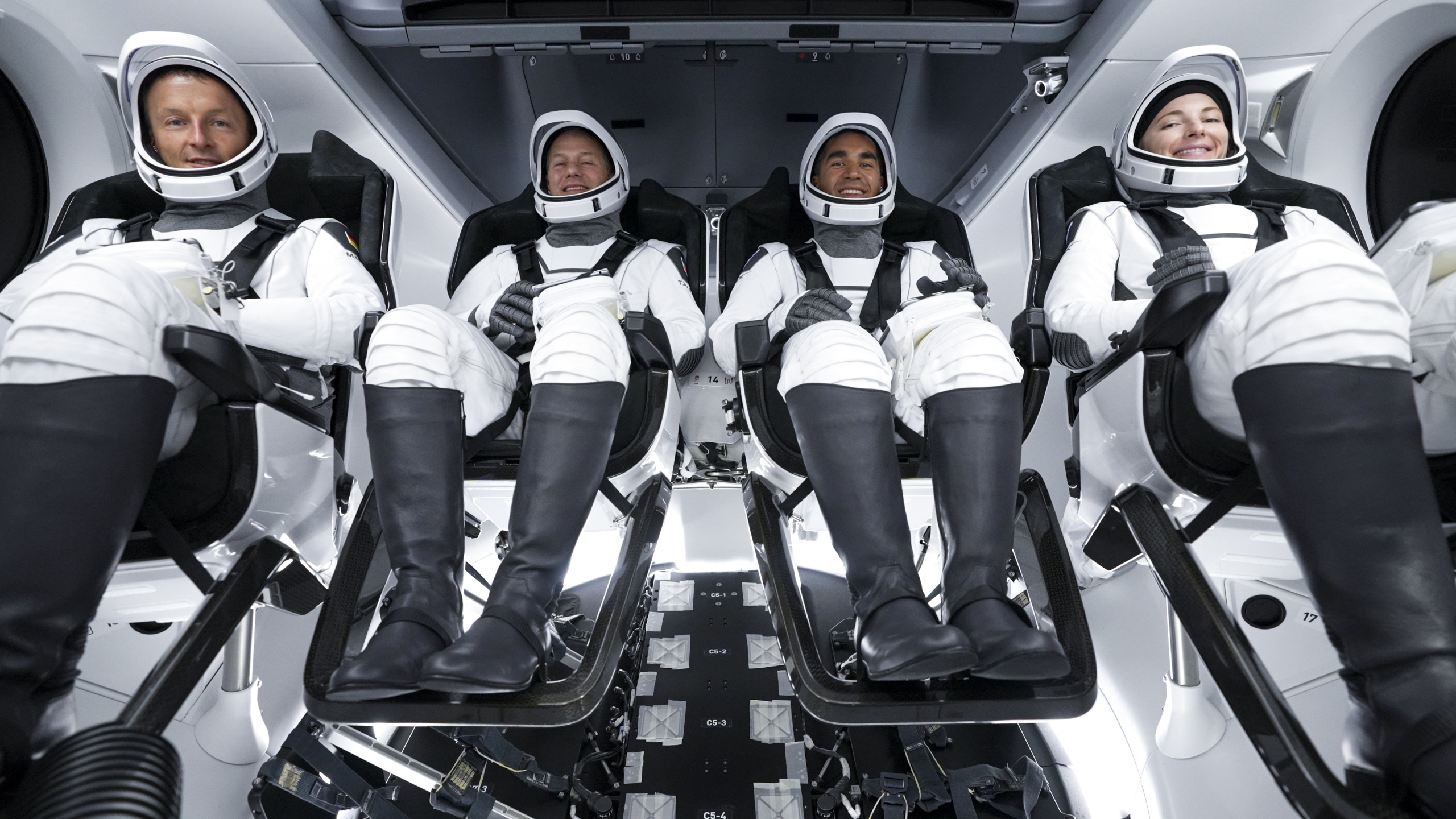 The Crew Dragon Endurance is making its first spaceflight as well – though its nose cone is reused from a previous flight. The spacecraft, also known as C210, was named to honor the SpaceX and NASA teams who worked through the COVID-19 pandemic. It is also named after the ship of Shackleton’s Imperial Trans-Antarctic Expedition that sank in sea ice before reaching Antarctica. Endurance joins sister ships Endeavour (C206) and Resilience (C207) in the Crew Dragon fleet.

Endurance flew atop Falcon 9 B1067-2, the same booster that launched the CRS-22 mission on June 3. The first stage successfully landed on the drone ship A Shortfall of Gravitas – stationed 540 kilometers downrange from Cape Canaveral – nine minutes after liftoff.

Just Read The Instructrions was the original drone ship assigned to the mission, but rough seas and 20 foot waves forced it out of position; SpaceX then determined it was easier and quicker to move A Shortfall of Gravitas into position instead.

The two stages separated around two and a half minutes after liftoff, and the second stage carried Endurance to orbit. The stage then deorbits itself to eliminate any possibility of orbital debris.

Endurance and its crew will arrive at the ISS about 22 hours after launch, docking to the Harmony module’s forward (IDA-2) port at 7:10 PM EST on November 11.

SpaceX Falcon 9 and Crew Dragon Endurance eagerly await for the launch of Crew-3.

The Crew-3 launch had been scheduled for October 31 but was postponed to its backup window of November 3 due to weather along the launch track. Since Dragon is carrying crew, areas downrange must have acceptable weather in the case of an abort and emergency landing.

The downrange weather was better on the backup date, but the launch was delayed again to no-earlier-than November 6 due to a minor, non-COVID-19-related medical issue with a crew member. It is not known which astronaut was affected.

The November 6 attempt was then called off due to bad weather at Kennedy Space Center and the abort zones along the flight path. The latest weather forecast for November 10 predicted a 70% chance of acceptable conditions.

The series of Crew-3 launch delays have led to what is called an “indirect handover,” as Crew-2 returned to Earth before Crew-3 arrived at the station. Normally, an arriving crew mission would reach the Station a few days before the departing crew leaves. 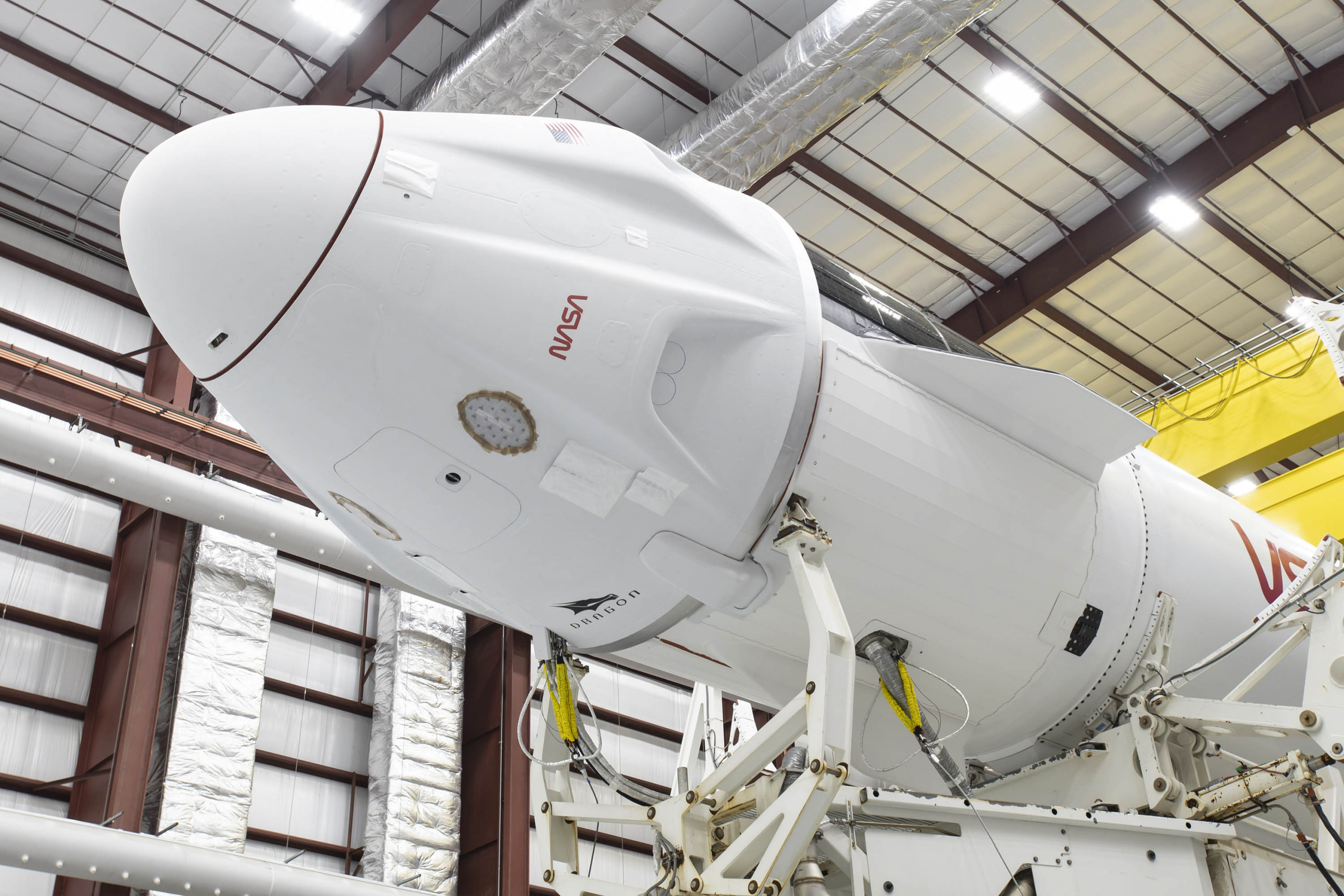 Crew Dragon Endurance inside the Horizontal Integration Facility at Pad 39A. Credit: SpaceX

With Endurance in orbit, there is now a total of 10 humans in low Earth orbit. This includes the four Crew-3 astronauts, the three crew members already at the ISS via Soyuz spacecraft, and three onboard the Chinese Space Station. A direct handover from Crew-2 to Crew-3 – leading to 14 humans in orbit  – had been planned before the launch delays, but the delays eliminated this possibility.

Crew-3 is scheduled to stay at the ISS for six months before being relieved by Crew-4 in the spring of 2022. During their stay, Crew-3 will be conducting experiments and maintaining the ISS – including performing at least one EVA. They will also be testing out improvements made to Crew Dragon, including the reworked toilet which was fixed after leaks were discovered in the Inspiration4 and Crew-2 Dragon capsules.

The Crew-3 mission is the 24th launch of a Falcon 9 this year and the seventh crewed orbital launch of 2021. This is also the third human spaceflight from the Kennedy Space Center this year, becoming the first time in ten years that three crewed flights have launched from Pad 39A since the retirement of the Space Shuttle. In 2021, twelve NASA and private astronauts took flight from the historic space center.

The pace of human spaceflight from the Kennedy Space Center is expected to increase in the coming years with other spacecraft and missions coming online. This includes the Artemis flights to the Moon and additional US Commercial Crew Program flights to the International Space Station.

What to expect from the next round of Starship testing