What to expect from the next round of Starship testing 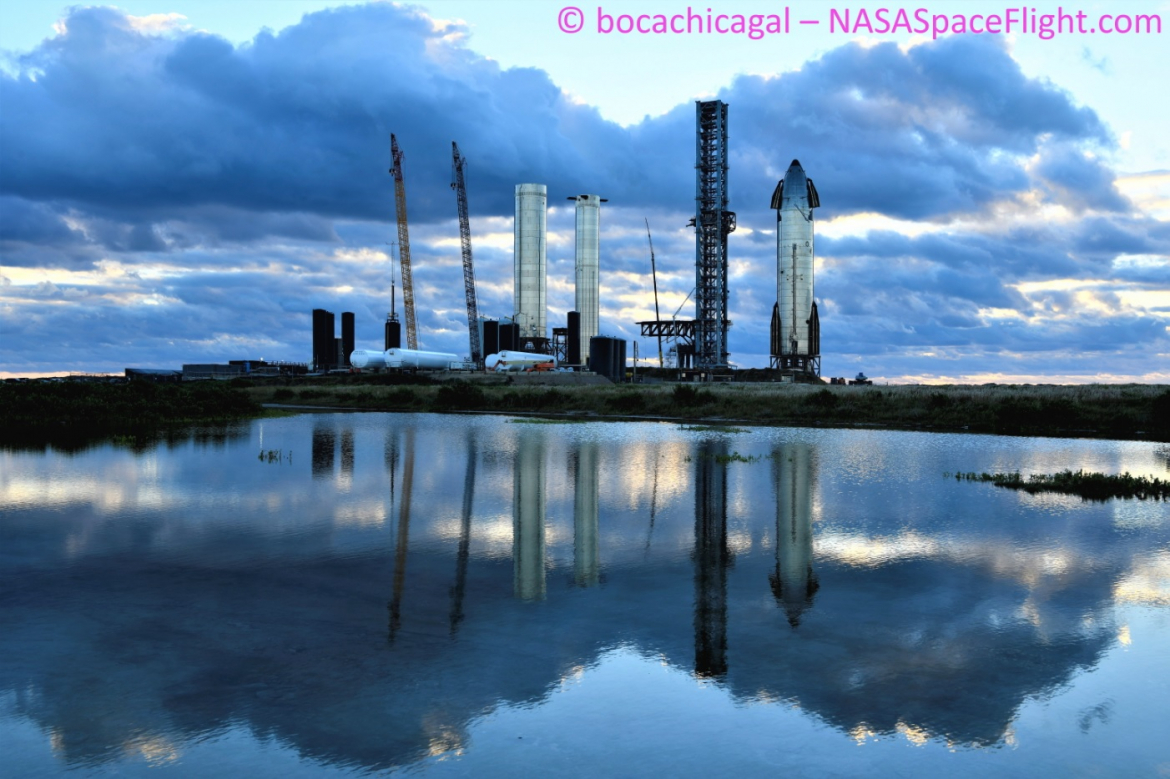 SpaceX is preparing for the third static firing of the Raptors on board Ship 20 later this week. This is underlined by a series of road closures and a Notices to Mariners (NOTMAR) in place. This test series might be the first of the Starship program to involve up to six engines, including three Raptor Vacuum engines.

The third test is currently expected to occur no earlier than this week. Ship 20 is, at the moment, expected to launch on top of Booster 4 for the first orbital test flight in a few months.

What proved to be consistent again with the first testing of Ship 20 was the startup of the methane recondenser as the start of the countdown. It is located in the suborbital tank farm, next to the test pad, and is used to cool methane to a liquid state. While never a perfectly accurate indicator, it showed activity on average 47 minutes before T-0. With the first Raptor Vacuum engine static fire, it started at about 45 minutes, which indicates a similar behavior of Ship 20 compared to previous vehicles.

Usually, the length of the countdown has been slightly longer with more engines, but not extended by more than a few minutes. For a potential static fire of six engines, a 45-50 minute Recondenser period is a reasonable expectation and with its necessary part in the countdown, it is an indicator that will not go missing in the near future.

After the recondenser showed activity for 15 minutes, and the tank farm came to life with vents and clouds on a variety of tanks, the next sign in a nominal countdown for a Starship vehicle is the beginning of propellant and oxygen loading, indicated by ground lines getting cold, and the vehicle venting from the thrust section as the lower Bulkhead freezes. At NASASpaceflight we call this “skirt vent.”

The fueling of Ship 20 showed more consistency in the countdown, beginning 29 minutes before T-0. This is very close to the usual 30 minutes of time between the first signs of fueling, and the ignition of the engines; however, this indicator might be influenced by the amount of fuel and oxidizer that SpaceX will load into the vehicle in preparation for a six-engine static fire. It is possible that the increase in fuel load will move the milestone earlier than the usual 30-minute mark, comparable to the difference in Recondenser timing.

This indicator is as certain as the Recondenser, as it’s just a result of fueling the vehicle. Fueling is a necessary step for the Static Fire, so a Skirt Vent, and propellant lines freezing, is an indicator to expect.

One of the biggest differences in the countdown was obvious with the so-called “Tri-Vent” in the first Static fire of Ship 20. Not only was the timing different from the usual 12 minutes between it and ignition, but the position and behavior of the venting changed as well. 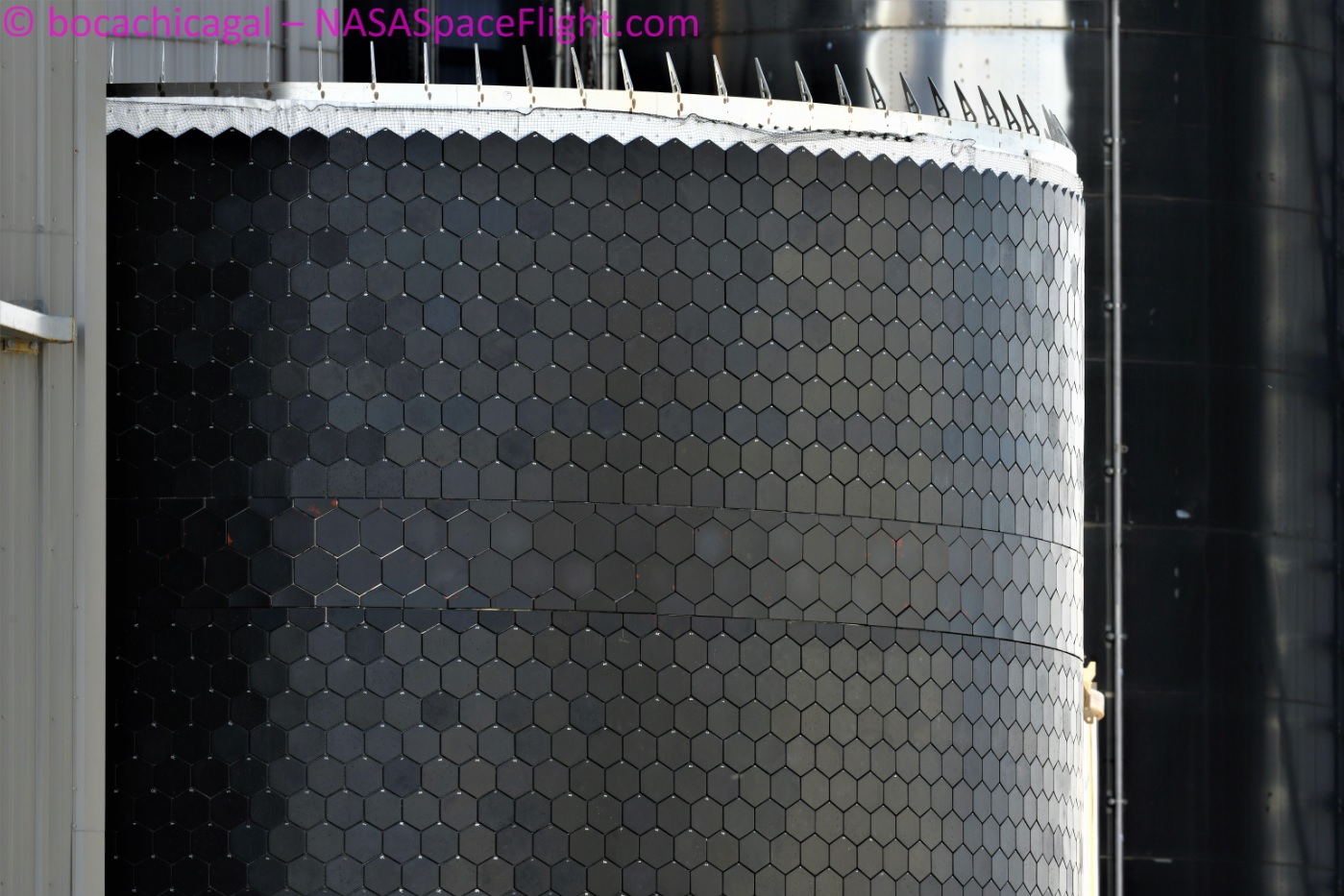 A section for Ship 21 at the production site, showing the heat shield tiles which have prompted a different “tri-vent” appearence in recent Starship testing – via Mary (@bocachicagal) for NSF

The vent usually indicates the beginning of Engine Chill on the Raptor engines, as a very small amount of super-cooled cryogenic liquid oxygen is flowing into the engine to cool it down into the temperature range that is needed to support an ignition later.

It started about 16 minutes before T-0 as a constant cloud, emitted by one of the vents on the non-shielded side of the vehicle. Instead of the usual stream of gas we saw before, this vent lacked the force that was visible in previous tests.

Only one vent was used for the cooling of the engines. This may be for a couple of possibilities. On the one hand, there was only one engine used for the first test, which usually only needs one of the vents to cool down. Another reason for a difference in vent placement might be that the vehicle is now fully shielded, which makes venting from the shielded side of the Ship not possible, as it is covered with tiles.

The chill is not an optional event for the engines, as SpaceX does not want to cryo-shock them at ignition. This could result in a sudden change in temperatures that could destroy the engine. By knowing this, we know that there will be some sort of Engine Chill vent for future tests. The only question is, in what shape or form it might appear.

During the final seconds, we saw the deluge system of the pad start at about 30 seconds. This water suppression system is used to provide acoustic protection for the ground equipment and the vehicle.

While the first test of S20 followed this predictable and usual behavior, the second test, about an hour after the first one, was odd in its pattern. After the first ignition, the vehicle never detanked, but rather entered a hold state, in which propellant was still inside the vehicle, but no new countdown was apparent to the spectators.

Detanking is usually indicated by a long and sustained vent from the upper and lower vent of the vehicle, and a variety of vents in the tank farm. Another good indicator in the past was the old flare stack, which is not ignited anymore. In detanking, it emits a constant cloud of gas from the top.

The ability to do this was demonstrated in flight test streams, as SpaceX mission control had multiple holds in the countdown which can be resumed after certain conditions are met. This is different from the kind of countdown SpaceX uses for Falcon 9. With that launch vehicle, a hold in propellant loading means a complete recycle of the countdown sequence.

At this point, we don’t know if this hold capability will stay for Starship in its operational phase, as both Falcon 9 and Starship deal with cryogenic propellants, which quickly heat up after a certain amount of time and leave the corridor of desired temperature and pressure for the engines.

With two so different static fires, it again proves that the Starship countdown is evolving. We might see different indicators appear, or existing ones disappearing. However, with each test, we get closer to understanding this powerful rocket and the fueling mechanisms behind it.