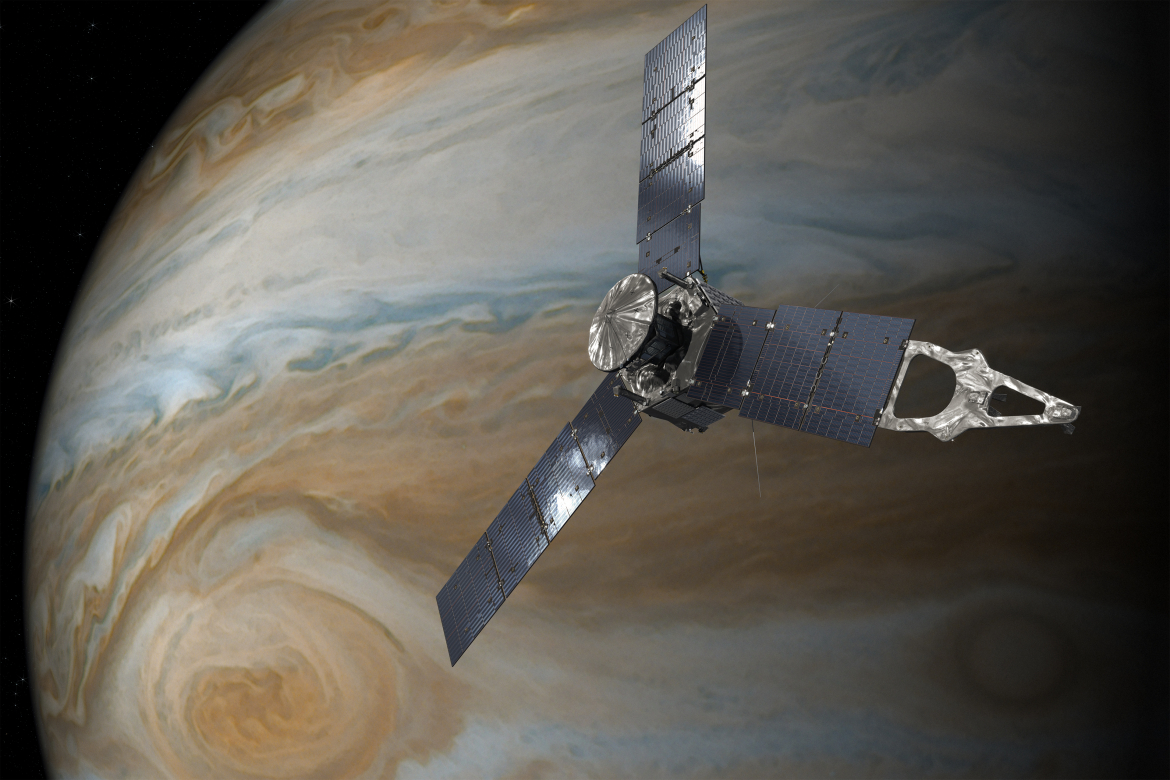 In a series of newly released papers from a science team on NASA’s Juno mission, new data is helping researchers discover how Jupiter’s atmosphere functions underneath the planet’s thick upper cloud layer.

“Each paper sheds light on different aspects of the planet’s atmospheric processes – a wonderful example of how our internationally-diverse science teams strengthen understanding of our solar system,” said Lori Glaze, director of NASA’s planetary science division.

“These new observations from Juno open up a treasure chest of new information about Jupiter’s enigmatic observable features.”

NASA’s Juno mission launched in August 2011 on a United Launch Alliance (ULA) Atlas V rocket and entered orbit of Jupiter in 2016 after a 5-year cruise.

From today's NASA/JPL briefing on new science from Juno:@NASASpaceflight: "How specifically does the atmosphere underneath Jupiter's cloud layer power the cyclones we see on Jupiter, and how do these intense cyclones form?"

Since then, Juno has completed 37 close passes of Jupiter, named perijoves. During each of these 37 perijoves, a suite of instruments onboard Juno has performed observations of the planet’s inner atmosphere below the swirling clouds that make up the gas giant’s upper atmosphere.

Using Juno’s Microwave Radiometer (MWR) instrument, researchers can see through Jupiter’s upper cloud deck and explore how the hundreds of cyclones in Jupiter’s atmosphere form and how their structures evolve.

The results from MWR show that cyclones are warmer on top, with lower atmospheric densities, while they are colder at the bottom, with higher densities.

The most iconic of these cyclones is the Great Red Spot, an anticyclone with winds as high as 432 km/h that is wider than Earth. 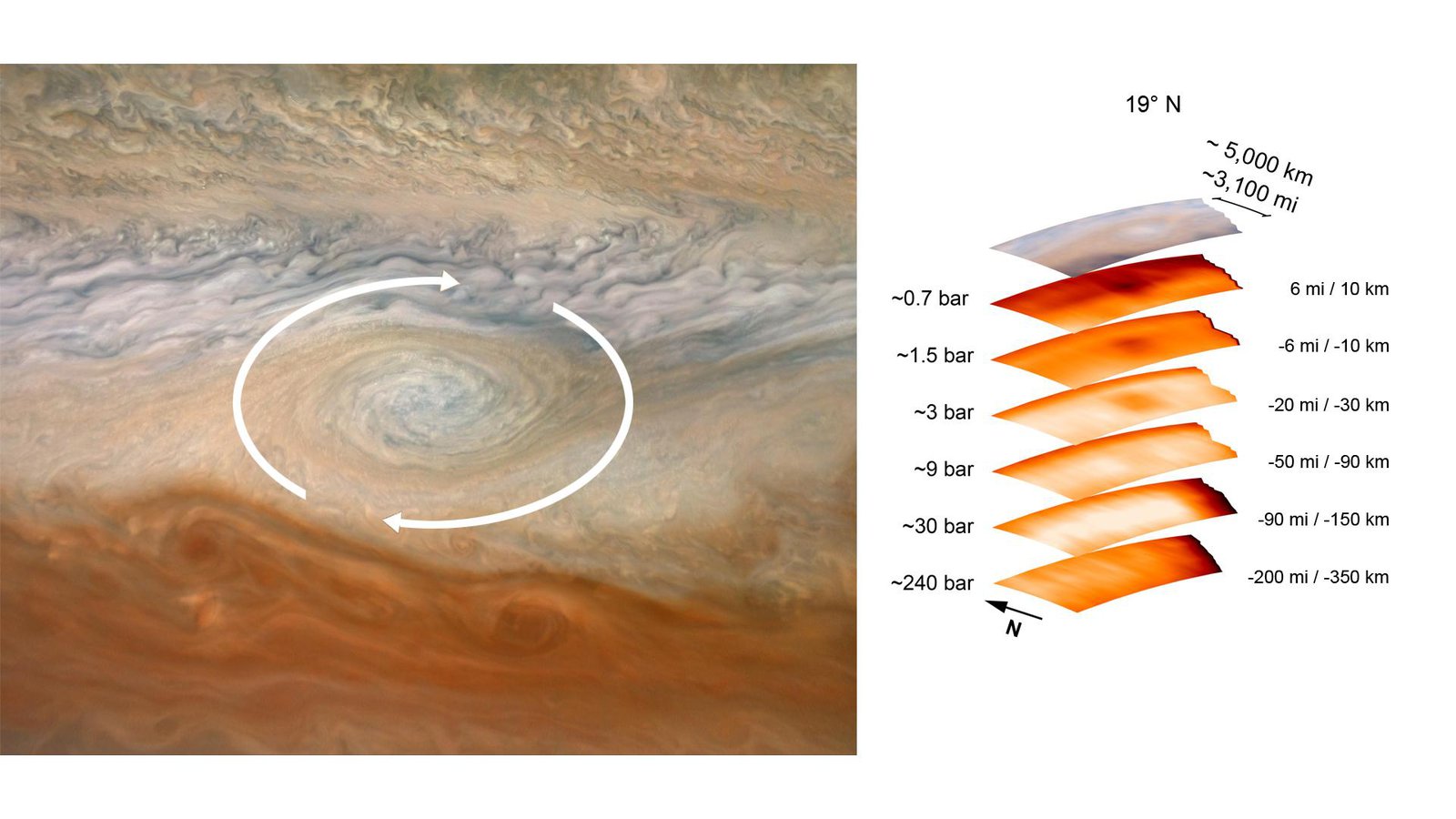 (Image caption: Left: Image from JunoCam annotated to depict the clockwise rotation of a vortex at Jupiter. Right: the large-scale structure of the feature seen by Juno’s MWR instrument.)

MWR microwave data from a flyover of the Great Red Spot in July 2017. (Credit: NASA/JPL-Caltech/SwRI/MSSS/Kevin Gill)What’s more, the new results indicate that these cyclones are very tall, ranging from 100 km (most of them) to 350 km+ (The Great Red Spot) below the cloud tops — much taller than previously expected.

The storms, therefore, cover atmospheric regions where water doesn’t condense into clouds — beyond the point where the Sun warms Jupiter’s atmosphere.

The sheer size of the Great Red Spot meant that its gravitational perturbations would likely be detected by Juno. So for two perijoves, scientists watched Juno using a Deep Space Network antenna as it whizzed over the Great Red Spot at speeds of 209,000 km/h. With this setup, scientists measured velocity changes in Juno as small as 0.01 millimeters per second.

Using this data, researchers were then able to determine that the Great Red Spot in fact stretches approximately 500 km below the cloud tops, complementing and expanding upon the previous MWR results.

“The precision required to get the Great Red Spot’s gravity during the July 2019 flyby [was] staggering,” said Marzia Parisi, Juno scientist and lead author of one of the studies investigating the Jovian atmosphere.

“Being able to complement MWR’s finding on the depth gives us great confidence that future gravity experiments at Jupiter will yield equally intriguing results.”

Using the Jovian Infrared Auroral Mapper (JIRAM) instrument, a new study indicates that these polar cyclones are extremely resilient to the powerful and ever-changing Jovian atmosphere. Since their discovery, the polar storms have remained in the same location.

But the JIRAM data showed that these polar cyclones want to travel poleward — similar to how tropical cyclone systems on Earth move.

However, cyclones located at the center of the poles “push back” on the other polar cyclones, creating a balance in positioning and explaining the number of cyclones present at each of Jupiter’s poles. 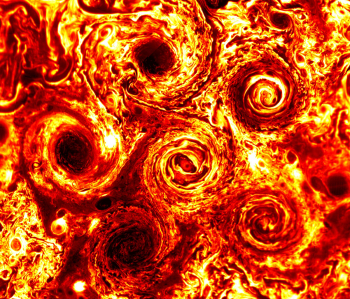 “Jupiter’s cyclones affect each other’s motion, causing them to oscillate about an equilibrium position,” said Alessandro Mura of the National Institute for Astrophysics in Rome and Juno co-investigator and lead author of a study on Jovian polar cyclones.

“The behavior of these slow oscillations suggests that they have deep roots.”

Aside from the Great Red Spot, another distinctive aspect of Jupiter is its bands of reddish and white-colored clouds wrapping across the gas giant. These bands are referred to as belts, and each belt is separated by strong east-west winds traveling in opposite directions.

These winds are called jet streams, and scientists have been trying to understand how they formed.

When Juno arrived at Jupiter in 2016, scientists used the craft’s onboard instruments to measure the depth of the jet streams and gather information on the belts’ overall structures.

The Juno data revealed that the jet streams reach depths of roughly 3,200 kilometers. But the mystery of how they formed remained. 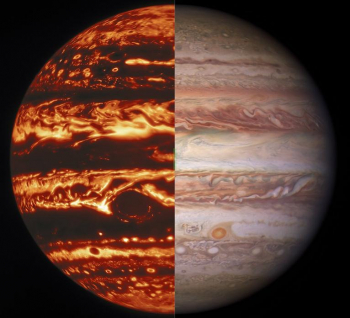 Now, a new study discusses results from the MWR instrument that may provide a clue to the structure and formation of the jet streams.

MWR data hints that ammonia gas in Jupiter’s atmosphere moves up and down in remarkable similarity with the observed jet streams.

“By following the ammonia, we found circulation cells in both the north and south hemispheres that are similar in nature to ‘Ferrel cells,’ which control much of our climate here on Earth,” said Keren Duer of the Weizmann Institute of Science in Israel and lead author of the study.

These Ferrel cells, like most things on Jupiter, are massive.

“While Earth has one Ferrel cell per hemisphere, Jupiter has eight – each at least 30 times larger,” said Duer.