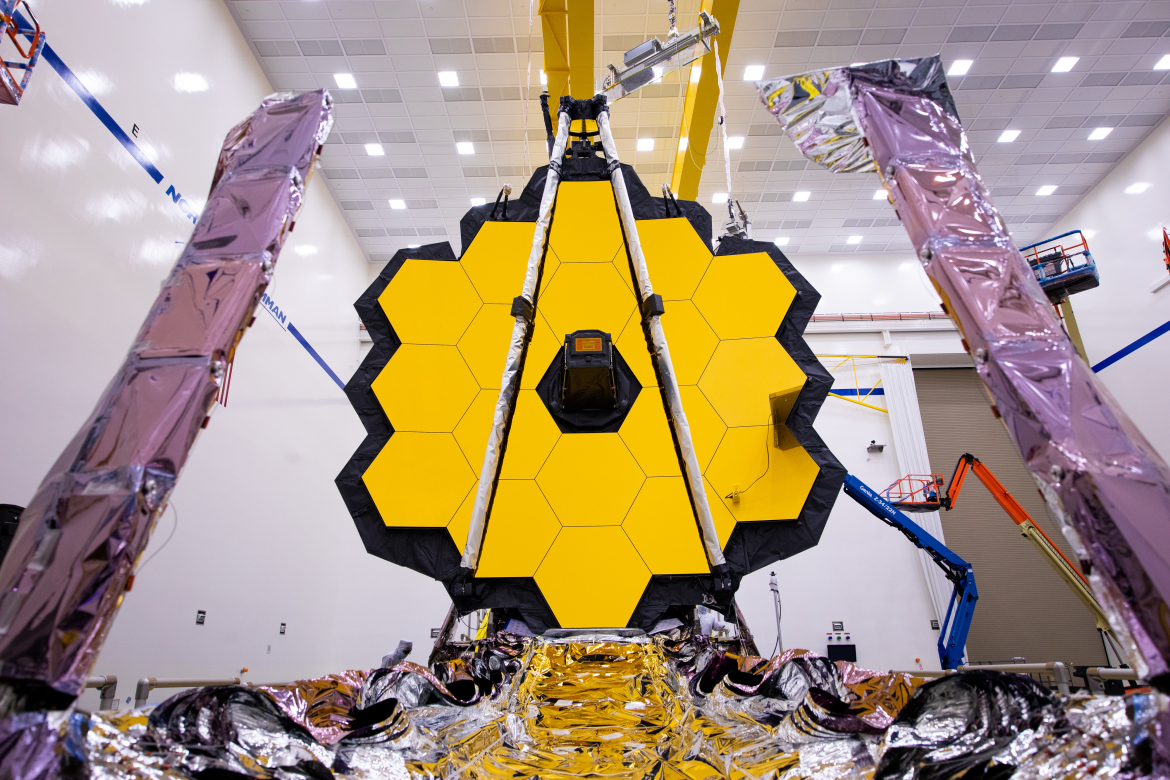 The James Webb Space Telescope (JWST), presently tracking toward a launch no earlier than December 22 on an Ariane 5 rocket from the Guiana Space Centre in South America, will revolutionize in-space astronomy, particularly with its Mid-InfraRed Instrument, or MIRI.

The instrument itself requires special cooling to drop its temperature to just 6 Kelvin — a cooling system that cannot be fully tested on Earth before launch. To discuss this and other elements of the MIRI component of JWST, NASASpaceflight spoke with the NASA Project Scientist for MIRI, Dr. Michael Ressler.

“In 1997 there was a call for concept studies for instruments for the Next Generation Space Telescope,” said Dr. Ressler. “A colleague and I put in a notice of intent, and we were actually awarded one of the concept studies. And the inputs from that concept study fed into what became the MIRI instrument.”

“And then, in 2001, JPL [Jet Propulsion Laboratory] bid on and was awarded the US half of the MIRI instrument. So I can legitimately claim to have been working on MIRI for 24 years now.” 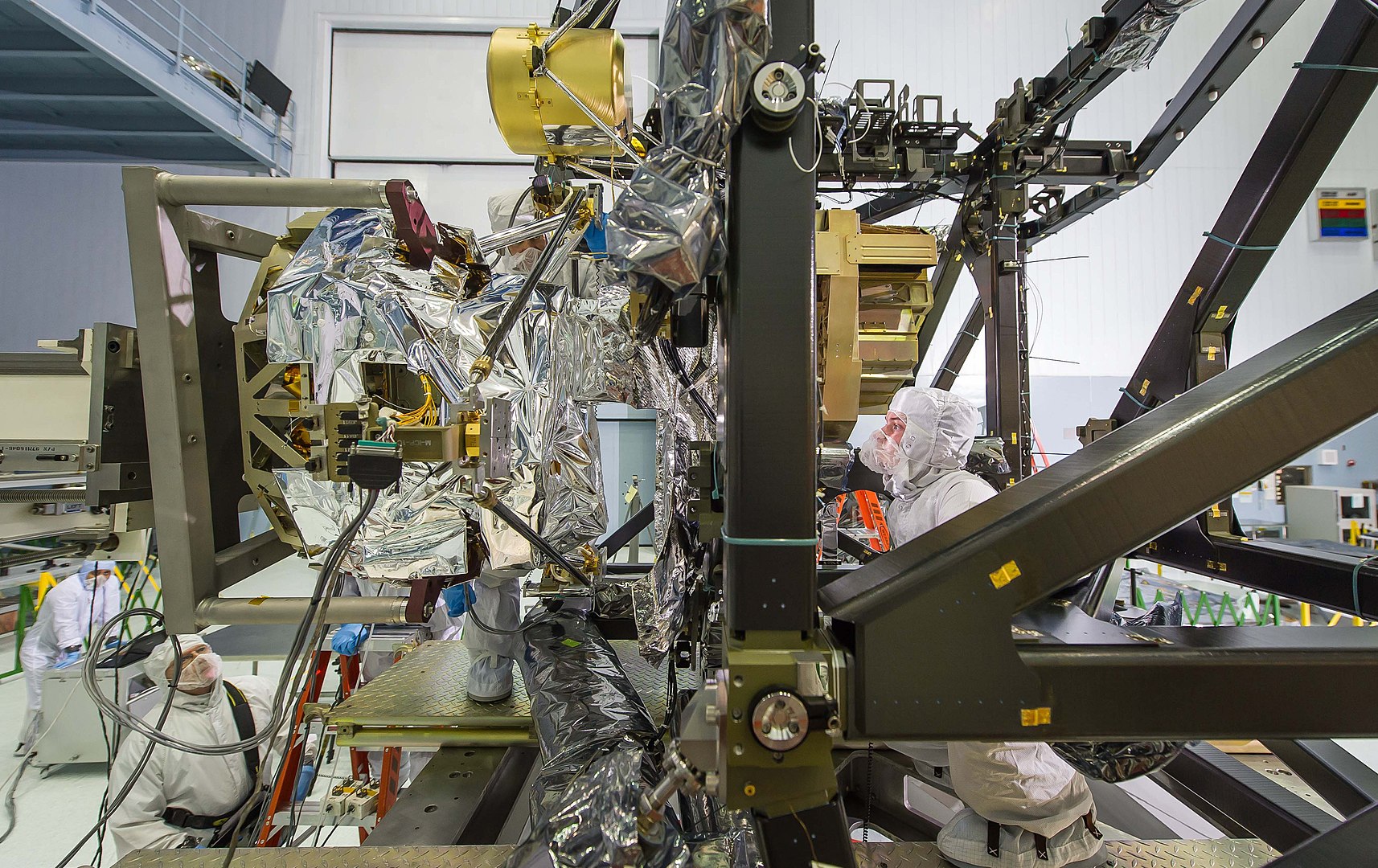 But why mid-infrared? Why not a larger version of the iconic and aging Hubble Space Telescope?

“It’s a different way of looking at the universe. And every time you look in a new way, you find stuff that you had no idea was out there,” related Ressler. “And even though serious infrared astronomy has been around for about 40 years now, I was involved in the WISE all sky survey, Wide-field Infrared Survey Explorer. And I happened to look at data from a planetary nebula, NGC 1514, that was discovered by William Herschel in 1790. And we still found new stuff around that that we didn’t expect.”

So if mid-infrared astronomy is so valuable, why aren’t there mid-infrared telescopes every place we look? Why don’t we have them in our back yards and rooftops?

“Observing at mid-infrared wavelengths has been described as observing with a telescope made out of light bulbs in broad daylight,” said Ressler. “Anything that’s warm emits radiation. And as it turns out, things that are at room temperature emit very brightly at 10 microns, which is right in the middle of what we call the mid-infrared.”

“So if you had MIRI operating on a telescope on the ground, everything would be glowing so much you just wouldn’t be able to see anything. It’s a bit like looking for stars in the daytime. The stars are still there, you just can’t see them because sunlight scattering in our atmosphere causes the sky to be really bright, and so you just can’t see stars which are relatively faint.”

“So it’s exactly the same principle, except in our case it’s the telescope itself that’s glowing. And so we need to have the telescope cold so that it doesn’t glow. Our instrument enclosure and all our optics need to be very cold so that they don’t glow. And then just the technology, the detectors themselves require them to be very cold. Everything has to be so cold simply so that we’re not washed out by this background from everything being warm.”

MIRI requires a temperature of 6 Kelvin for operations, far colder than the just below 40 Kelvin that the James Webb telescope’s sunshield is capable of cooling the observatory to. “We have to operate near 6 Kelvin to reduce the detector dark current. We wished the telescope were colder, but there we can only take what we can get.”

“That was a challenge,” related Ressler. But not because cooling something like JWST down to 6 Kelvin is a challenge with today’s technology. Instead, it had to do with the cryocooler’s specifications to operate in space as well as the distance the cooling lines have to traverse to cool the MIRI instrument.

“If you think about your refrigerator or freezer in your kitchen, it has a lot of the same technology. It has a compressor that compresses the gas that then flows through thin tubes that go to the cold head where that gas then expands and cools things. So the fundamental technology isn’t really much different from what you have in the kitchen.”

“But the problem is that compressors have moving parts. They have pistons that move back and forth. And so you have to ensure that any vibration that comes from that is balanced. So, generally, coolers have counter-moving pistons so that when one’s moving left, the other’s moving right. And in that way they cancel out the vibrations you would introduce from these pistons moving back and forth.”

During commissioning of the telescope, the cryocooler team will have the ability to tweak the frequency of the vibrations to ensure crisp images are collected by the observatory’s instruments. 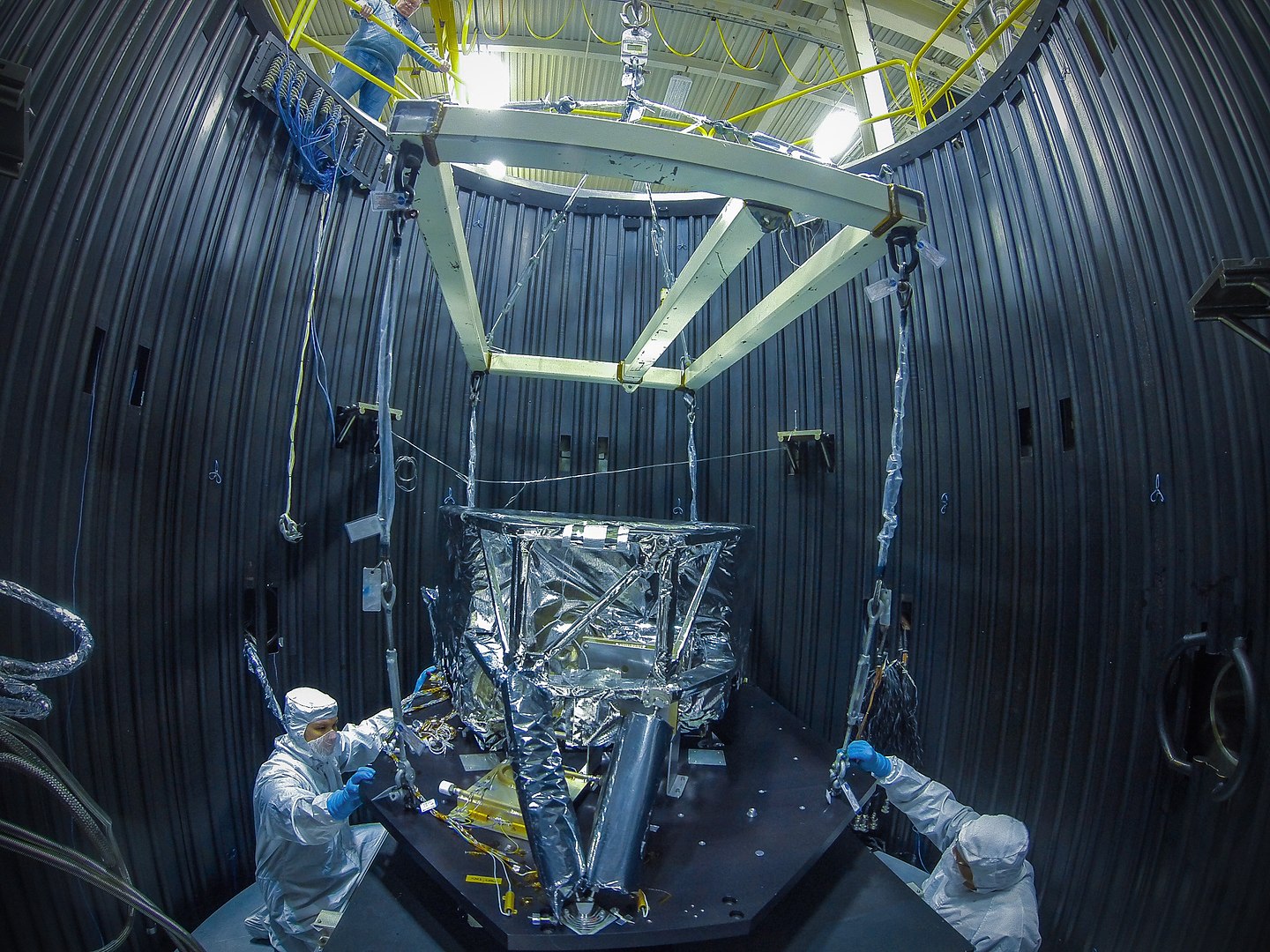 (Photo caption: Goddard Technicians Tony Kiem (left) and George Mooney (right) guide the craned structure holding the Webb telescope’s MIRI Shield Environmental Test Unit into place in a cryogenic test chamber. This shield will be used to simulate the MIRI instrument during prelaunch testing to verify that the MIRI cooling system will function properly in space.)

The importance of this system notwithstanding, the entire cryocooler assembly has not been tested end-to-end as a single unit.

“Because of how JWST came together, it was never possible to test them as a single unit. So that’s part of the reason we’re going to be holding our breath. We’ve done everything we could to test the pieces, to make sure they all do what they’re supposed to do. But that’s one open test. They’ve never actually operated together as one single unit.”

Another complication for the cryocooler is the use of helium gas.

Testing MIRI, the 'coolest' instrument on the James Webb Space Telescope, which must be cooled down to -267º https://t.co/YSWZlH4flq #JWST pic.twitter.com/SfXLJQX9YB

“We compress helium gas and then let it expand. So leaks are a huge problem. Because this cooler is so long, there’s so much tubing that has to go through different parts of the observatory. There are a number of joints that connect the tubes to the compressors and connect to the cold heads. So you have all these places where you can leak helium. And helium loves to leak. It’s a very small atom; it doesn’t take much of a hole to have it all leak out. So we have to make sure we have it completely tight. Air tight isn’t good enough. It has to be helium tight. A completely tight system.”

For MIRI, operations will not begin as soon as JWST is deployed from the top of the Ariane 5’s upper stage. Instead, more than a week will pass before portions of the MIRI system will begin to activate, starting with MIRI and cryocooler activation nine days after launch.

First up for MIRI proper will be a test of its Instrument Control Electronics, or ICE. After this, the cover over MIRI’s instruments to prevent contamination will be commanded to open.

At this point, MIRI is still at “room temperature,” according to Ressler.

On day 16 after launch, functional checkouts of the instrument’s electronics will begin, including checks of the filter and grating wheels as well as activation of MIRI’s detectors.

“And so day 16 is our first chance to see if they’ve all survived launch and are functioning correctly,” said Ressler. 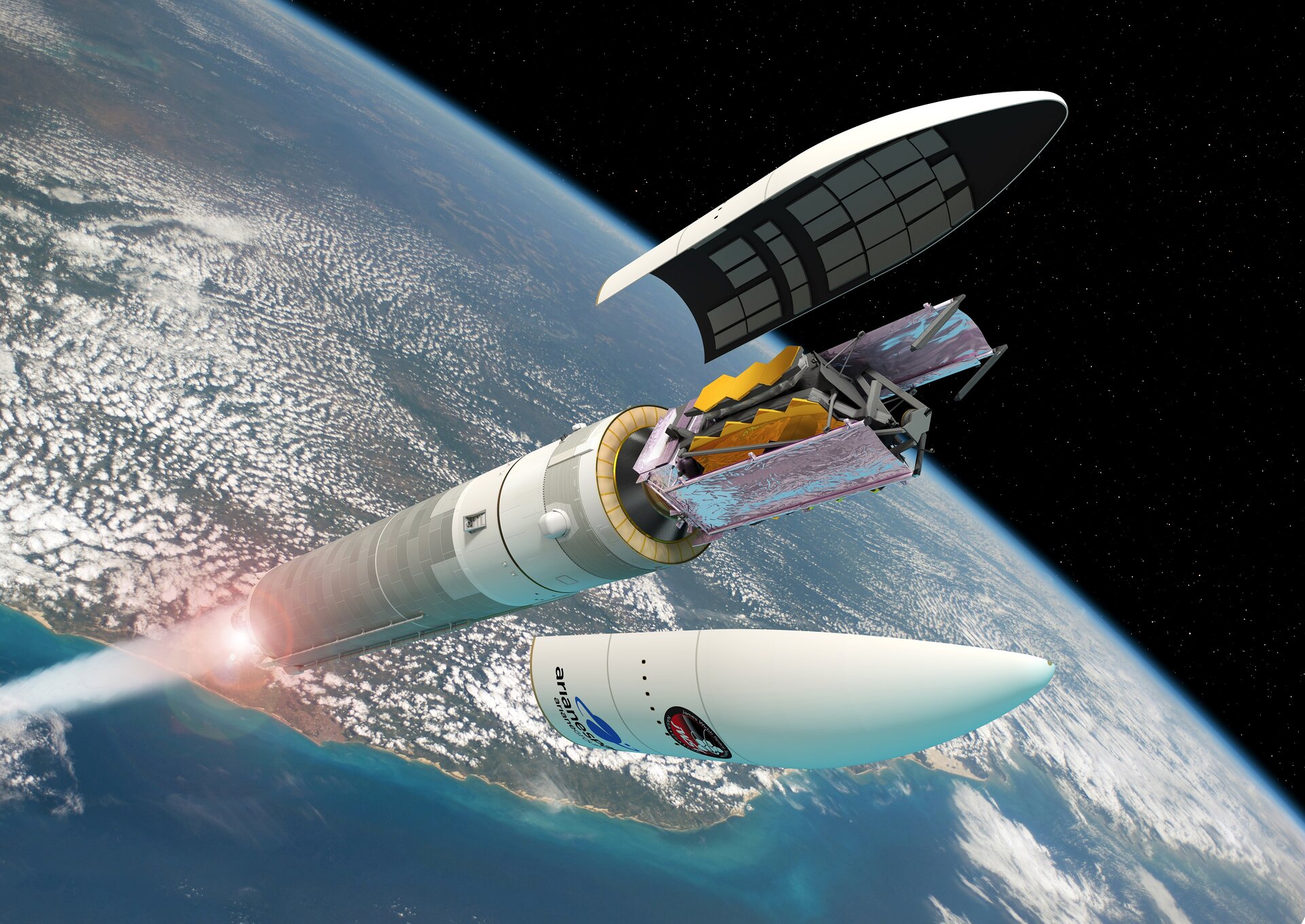 Thirty days after launch, the detectors will provide their first “thumbprint images,” which according to Ressler will allow the team to verify that the entire data chain is functional and that data will be collected as expected when the instrument is in its final cooled state.

From that point on for MIRI, approximately 63 days of cool down operations will follow as the cryocooler drives the instrument down to 6 Kelvin. Once there, approximately 93 or 94 days after launch, the first actual MIRI images will be collected… of the inside of the cover to continue verifying that all is operational with the instrument.

“So there are two regions of the sky that JWST is always able to image, the north ecliptic pole and south ecliptic pole,” said Ressler. “So we have specific targets chosen in those two ecliptic poles that will let us measure the plate scale — how many arc seconds per pixel we’ve got. It’ll let us check our distortion.”

“So there’s well-characterized clusters of stars that other missions have used. They’re patches of sky that we understand very well. They’ll be relatively photogenic. So yes these are images of things in the sky, but they are calibration fields that are commonly used to do instrument checkouts like this.”

If current schedules hold, the James Webb Space Telescope will lift off on Wednesday, December 22, 2021 at 07:20 EST / 12:20 UTC. Should launch slip from this date, there are — with some exceptions — daily launch opportunities extending into 2022.