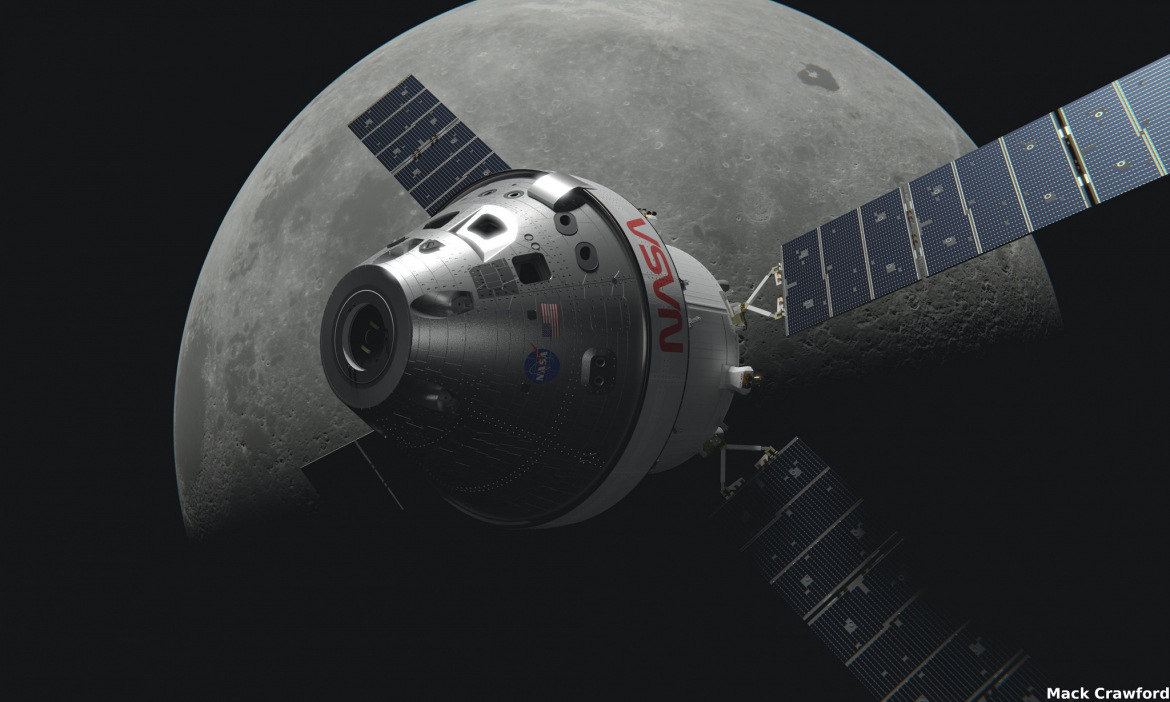 The arrival of the second Orion European Service Module (ESM) at the Kennedy Space Center (KSC) in October signified the beginning of months of final assembly of the first crewed Orion spacecraft that will fly four people on the Artemis 2 mission. Following the delivery of the ESM from prime contractor Airbus Defence and Space to Orion prime contractor Lockheed Martin, the two primary elements of the Artemis 2 Orion Service Module are now being bolted together.

Lockheed Martin is processing Orion flight hardware for Artemis 2 and Artemis 3 as a part of their Assembly, Test, and Launch Operations (ATLO) in the Armstrong Operations and Checkout (O&C) Building at KSC. As they process the Artemis 2 Orion Crew and Service Modules to be mated next year, the ATLO team also received the next Crew Module (CM) pressure vessel and is also simultaneously beginning build-up of the Crew Module and Crew Module Adapter (CMA) structures for Artemis 3.

Following completion of production at their assembly, integration, and testing (AIT) facility in Bremen, Germany, Airbus delivered ESM Flight Model-2 (FM-2) to KSC in mid-October. Alternately referred to as ESM-2, after the module was received in the O&C Building, it was tested following its overseas air transportation to make sure it was ready to be mated with the Crew Module Adapter (CMA) for Artemis 2.

“We perform something called the TIC, which is the Transportation and Integrity Check,” Laura Poliah, Orion Lead Test Engineer for NASA, said in November 5 interviews on the floor of the O&C Building. “After having traveled all this distance, we check to make sure [that] nothing has changed significantly after that transport and everything is good to go before you put in the CMA.”

“We did things like, we checked the pressures of all the tanks, we checked to make sure the valves were all in the correct states that they were supposed to be in for systems like the prop system, and we checked to make sure, from an electrical perspective, that all the harnessing that is going to be connecting up to the CMA has the right resistance and continuity associated with that.”

“So we check all those things individually to make sure that when you do that connection there’s not going to be, like, say, electrically a transient spike that harms the CMA from that perspective.” 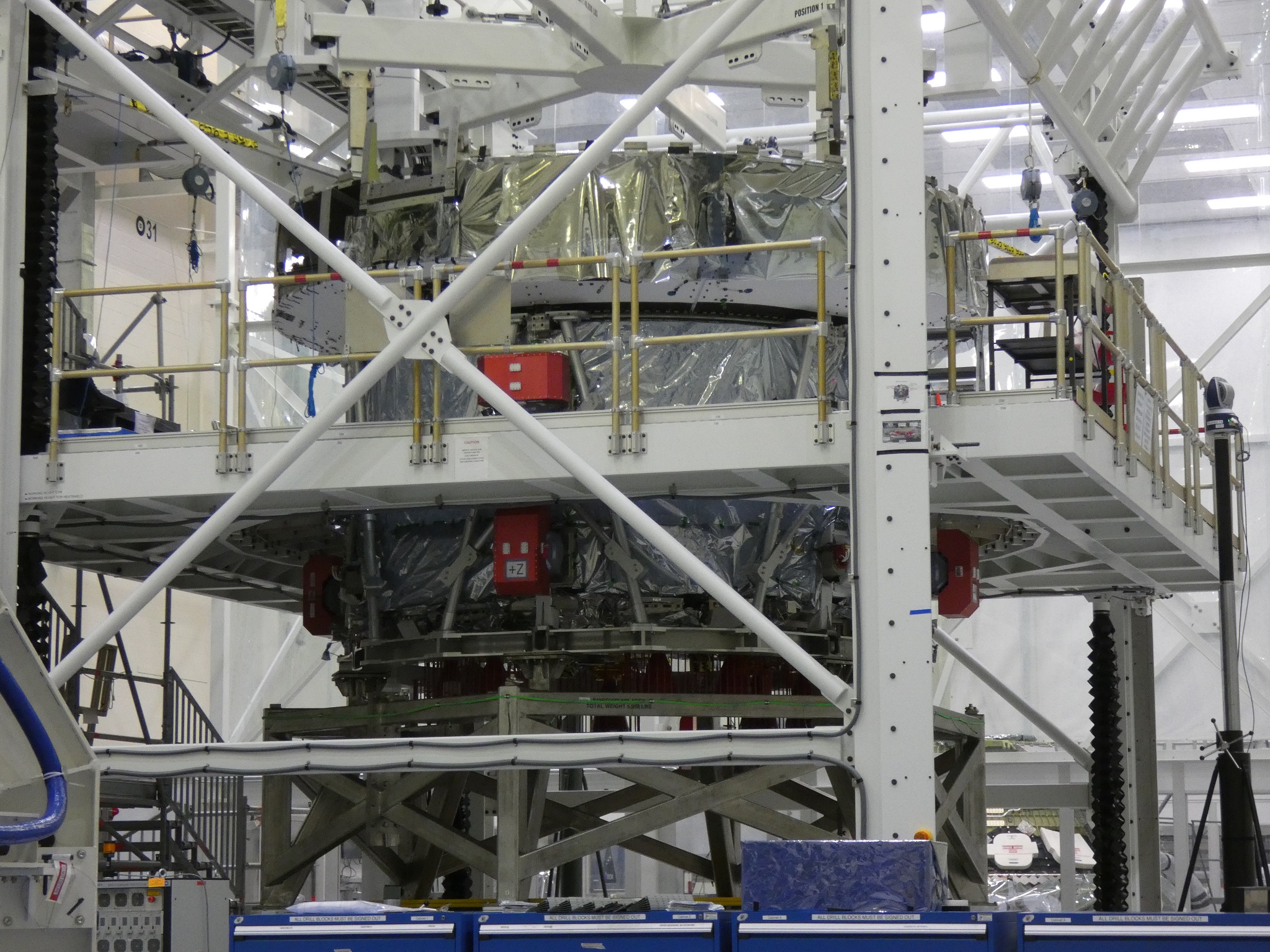 (Photo Caption: The Crew Module Adapter and European Service Module for Artemis 2 are seen on November 5 in the lift station of the Armstrong Operations and Checkout Building at KSC. The two elements are being integrated structurally and functionally into the spacecraft’s Service Module.)

“We do all of that beforehand, and once we completed that then we gave the go-ahead to then go mate the CMA,” she added. At the time of the interviews on November 5, the CMA and the ESM had been positioned in the lift station in the O&C, and bolting of the elements was underway.

“There are 192 bolts that have to be installed, and so I believe the bolts are loosely fit in [initially], 120 of them, and they’re just now starting to tighten them and torque them down,” Amy Marasia, NASA’s Branch Manager for Orion Production Operations and Spacecraft Assembly, also noted.

The CMA and ESM are the two major elements of the Orion Service Module; after they are permanently bolted together, the newly integrated Service Module will be moved from the lift station to the O&C cleanroom.

“That is its next stop,” Marasia said. “After the structural mate, it comes into the cleanroom where we then do the welding [of fluid lines between the CMA and ESM].”

“Some of them are mechanical fittings, but we basically install the tubing that goes between the CMA propulsion systems and the ESM and also the environmental control and life support systems, [such as] oxygen, nitrogen, water. So all the commodities. We basically have to put jumper tubes and install those.”

During the event, the cleanroom was also occupied by the Artemis 2 Crew Module, which was down to final standalone welds. “We’ve got three more welds that need to be done in the cleanroom, so it’s going to come out next week, out of the cleanroom, and it will return to the CM station,” Marasia said.

“I think it’s about two, two and half months of installing all the electrical harnesses, outside and inside, installing all the avionics boxes [such as] computers, power data units — everything that goes with command and data handling, the guidance, navigation, and control. All of that electronic [installation and outfitting] work is going to happen in the next two months.”

At earlier points in time, NASA had planned to reuse all the Crew Module avionics equipment in the Artemis 1 spacecraft for Artemis 2. Prior to 2019, the missions were called Exploration Mission-1 and Exploration Mission-2 and were the only ones fully baselined as a part of the initial operating capability within the Exploration Systems Development (ESD) division.

For a long time, as many as three years or more were forecast between the missions now referred to as Artemis 1 and Artemis 2; however, a significant revision in the ESD manifest in 2018 allowed the missions to be flown closer together. The change also put Artemis 1 on the critical path for Artemis 2, and the Orion Program advanced procurement of a second set of Crew Module avionics later in 2018 so that assembly of the Artemis 2 spacecraft would not be significantly held up by Artemis 1.

The full avionics set is conceptually divided into “core” and “non-core” groups; Orion first decided to move up procurement of the core avionics, and those computers and devices are at KSC ready for installation into the Crew Module. “The decision was made to accelerate the core set that was going to be built for Artemis 3, so that core set was built earlier and it’s going to be installed on Artemis 2,” Marasia said. 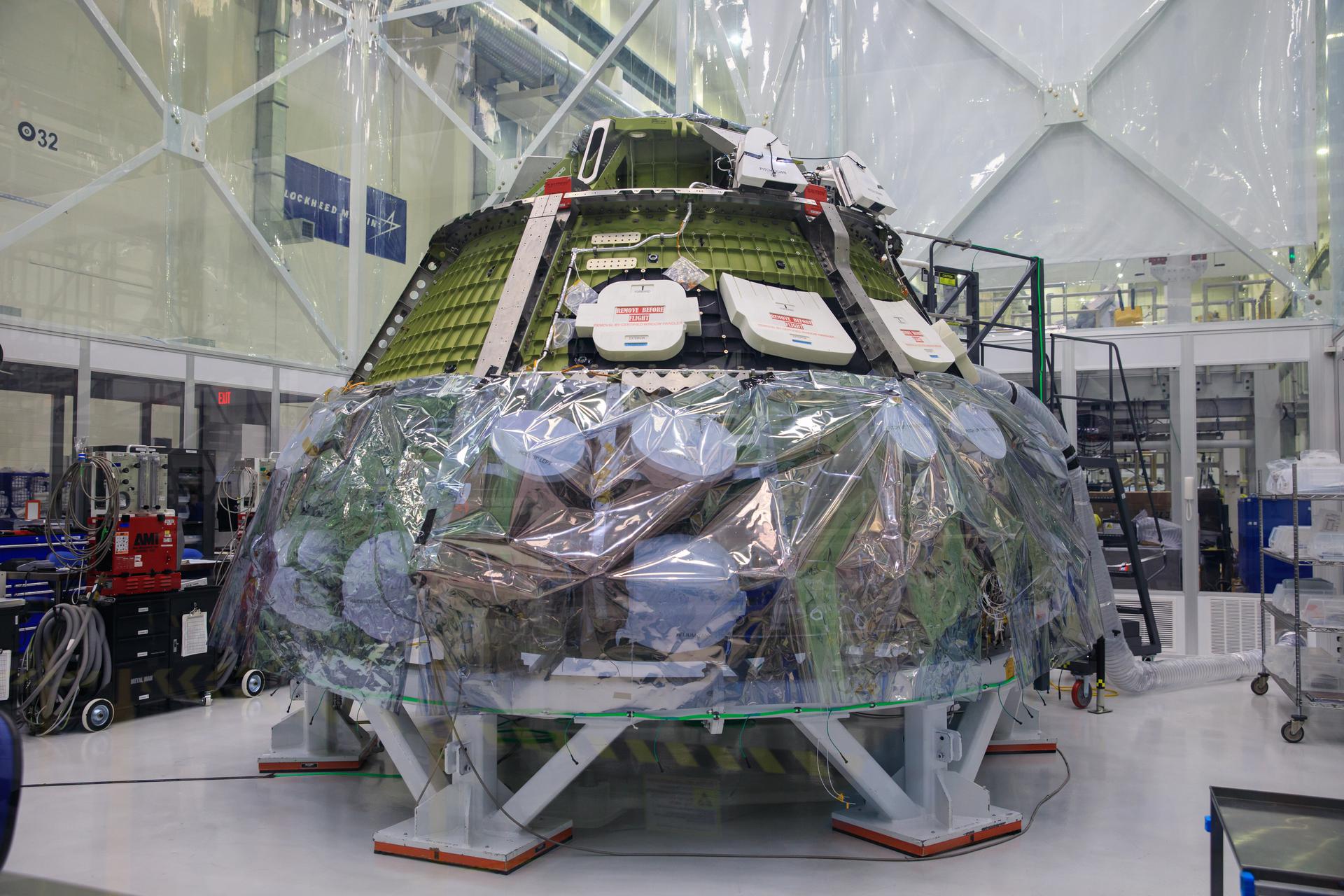 (Photo Caption: The Artemis 2 Crew Module is seen in the cleanroom in the O&C Building on November 5, where the last set of welds were being completed. The module was scheduled to exit the cleanroom following the welds in preparation for electrical and computer installations and initial power-up in 2022.)

“We do still have a set of the non-core avionics — basically antennas, receivers, inertial measurement units — those are still going to be reused from Artemis 1,” Marasia said. “We are dependent now on Artemis 1.”

“I wasn’t involved in those trades, [but] I think [between], schedule, funding, technical risk, I’m sure all of that risk was [considered],” she added. The decision to use the non-core avionics that will fly on Artemis 1 as a part of the Artemis 2 flight configuration means completion of the Artemis 1 mission remains a critical path for Artemis 2.

Currently, Artemis 1 is projected to launch no earlier than mid-February; launch during the February period would result in a nominal-mission splashdown in late March. On that projected schedule the earliest availability of the Artemis 1 equipment would be in the April time frame, which would be about the time when the Artemis 2 Crew Module is scheduled to begin its initial 10-12 week power up and functional checkouts with the core set of avionics.

This timeline could change, however, with an Office of Inspector General report issued Monday, November 15, noting that NASA will likely not be ready to fly Artemis 1 before “summer 2022.”

Meanwhile, the newly-mated Service Module for Artemis 2 will move into the cleanroom in mid-November for welding of its fluid connections. Following that, it will be moved into a proof test cell for leak checks on the now-integrated Service Module fluid systems.

“We have the propulsion system and the environmental control system. Those are our two main systems that we want to make sure [are] in healthy shape, and so we’re going to be taking that to the max design pressure times 1.5 for a factor of safety,” Poliah said. “We’re ensuring the workmanship on both the CMA and the ESM are healthy, and then we put in a gas to check for leaks.” 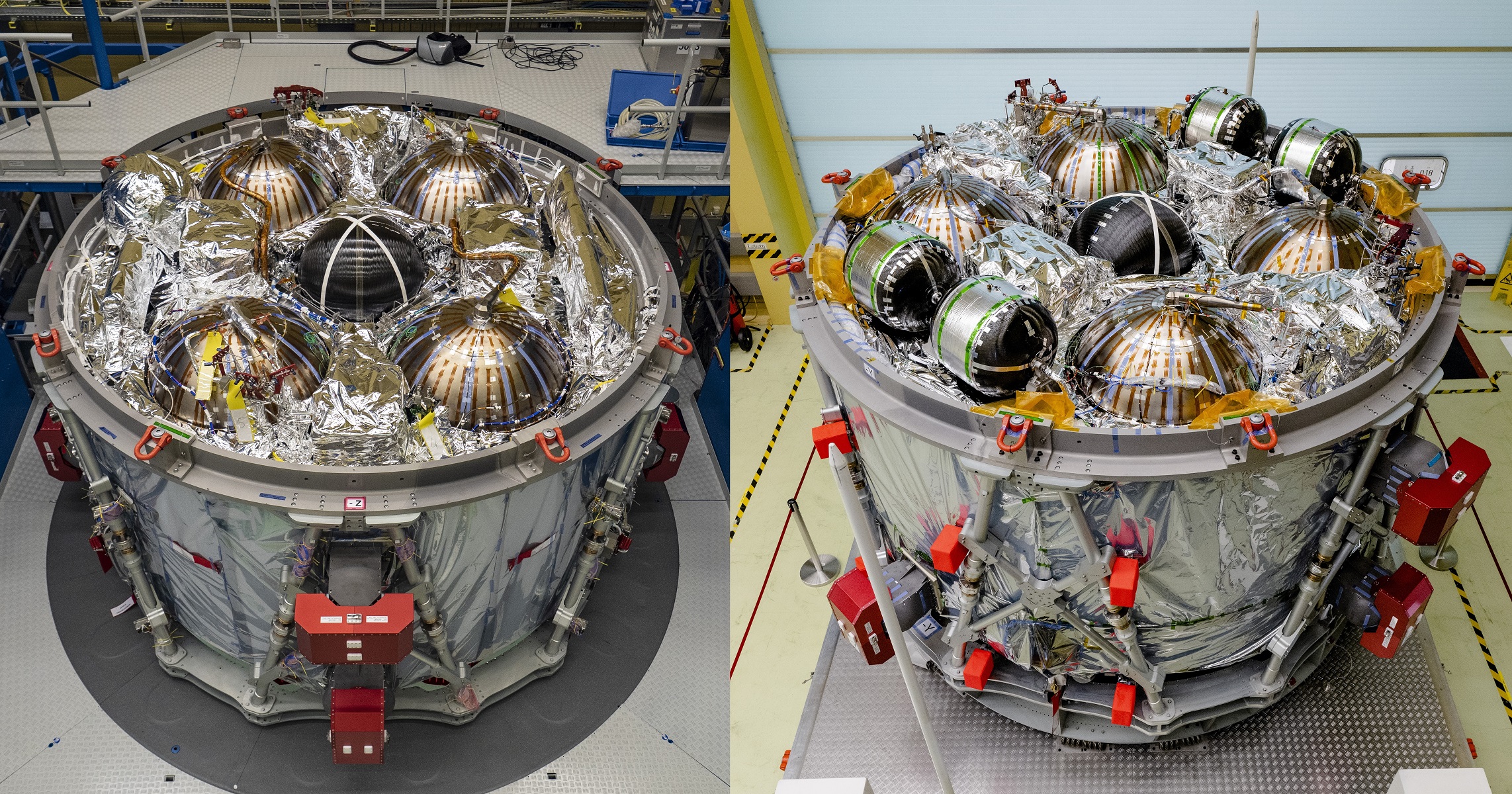 (Photo Caption: Images of ESM Flight Model 1 (left) and Flight Model 2 (right) taken three years apart at the Airbus assembly, integration, and testing (AIT) facility in Bremen, Germany, show a few of the differences between the units. Compared to the one seen in the first flight model on the left, a full complement of four life support, composite-over-wrapped pressure vessel (COPV) tanks can be seen mounted in pairs to the outside edge of the right-hand second flight model that was recently shipped to Florida for Artemis 2. Those tanks will hold gaseous nitrogen and oxygen to support the cabin atmosphere. The forward domes of the four, metallic propellant tanks can be seen poking up in the middle of the ESM, with one of the helium COPV tanks in the center between them.)

“We’re checking for leaks in the tubing and in the welding and the service valves, and we’re ensuring that nothing in the system has any defects from that perspective,” Poliah added. “I think it’s planned for the December time-frame to get into there, and the first set will be the propulsion [systems] and then we’ll do the environment control [systems].”

From the proof pressure test area, Marasia noted, “[the Service Module] goes into basically the area just to the left of the CM station. It looks empty but there will be stations, scaffolding, and work platforms brought around it, and then it will get the electrical work on it between the CMA and the ESM. So first we do the fluids work, proof pressure test, and then we go and do the electrical mates between the CMA and the ESM.”

Marasia also noted some differences in the Service Module integration and test flow that is beginning now that ESM-2 has arrived in Florida. “It’s got a few differences,” she said. “Previously, we did some tests before [ESM-CMA] mate, and so now pretty much the majority of the testing of the Service Module is after mate.”

“It was different for Artemis 1 because we had to take it up to Plum Brook, and you didn’t have the SA cone on for Plum Brook. And then you had to bring it back,” she added. The Artemis 1 spacecraft is the first with a fully functioning Service Module, and in late 2019 it was transported to Plum Brook Station in Ohio for a few months thermal vacuum (T-Vac) and other testing as a part of the overall development certification for Orion.

The work by Lockheed Martin on the Crew Module and Service Module over the next few months will be preparing them for their initial power-up. “Actually, they’re both kind of lining up to be in April of next year,” Marasia said. “So right now, per the schedules, [the Crew Module power-up] is about a week before the Service Module.”