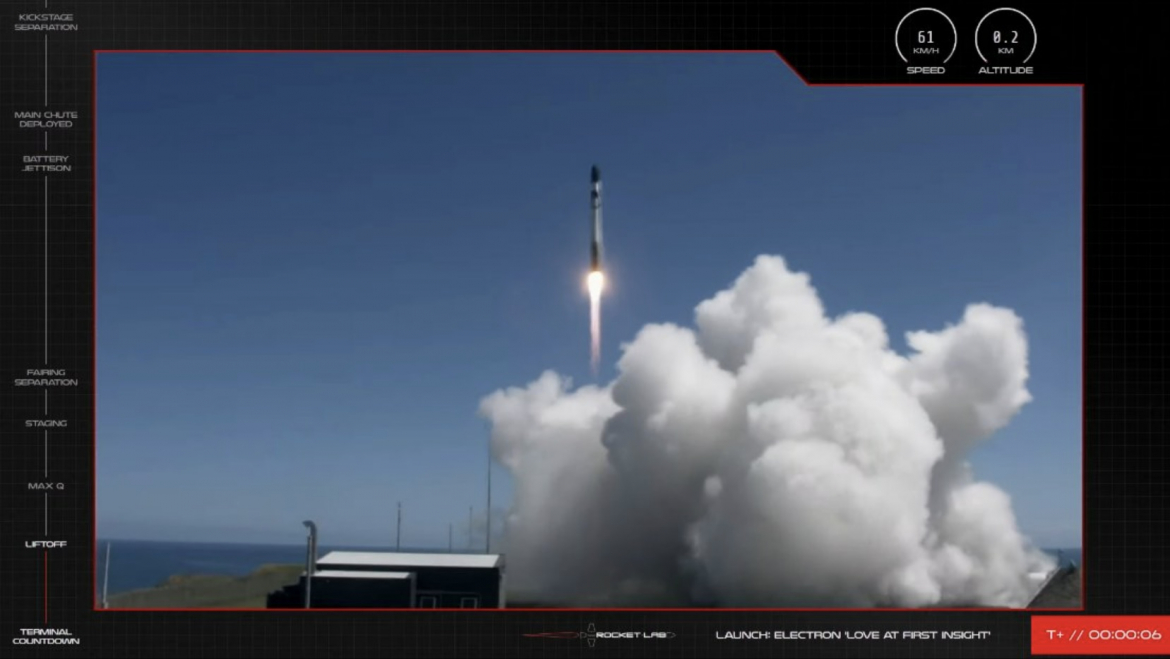 Following a hiatus of several months, Rocket Lab returned to launch operations with its 22nd overall mission on Thursday. An Electron rocket lifted off from the company’s Launch Complex 1 in Mahia, New Zealand at 01:38 UTC (14:38 local time) on November 18, following delays to evaluate an out-of-family ground sensor and wait for cooperative weather.

Named “Love at First Insight,” the mission lofted two satellites for geospatial intelligence company BlackSky, as well as completed the third ocean splashdown of an Electron first stage as Rocket Lab continues to work towards reusability.

Love at First Insight is the second in a series of launches that Rocket Lab is conducting for BlackSky. Earlier in 2021, Rocket Lab and Spaceflight, Inc. signed an agreement for four launches of BlackSky satellites, with options for two further launches in the future. Each launch is planned to carry two satellites.

This mission placed the eighth and ninth BlackSky Global satellites into a 430-kilometer circular orbit, inclined 42 degrees to the equator. Rocket Lab has also launched several of BlackSky’s previous satellites, including two that were lost during an in-flight anomaly in May.

In order to launch two BlackSky satellites simultaneously, Rocket Lab has created an extended payload fairing as well as a payload attachment mechanism that allows the satellites to be stacked on top of each other. In the company’s Electron Payload User’s guide, expanded fairings are listed as a “non-standard service,” and are only available for missions with at least a 12-month mission integration schedule.

On previous launches, Rocket Lab has demonstrated the use of two slightly altered versions of its fairing, including the BlackSky double satellite configuration.

Rocket Lab aims to become the first company to field a reusable small satellite launch vehicle. The company has stated in the past that reusability will help to cut costs and enable more frequent launches of their Electron rocket.

Love at First Insight was the third successful attempt an ocean splashdown test of an Electron booster, featuring for the first time a helicopter in a passive, observational role. Rocket Lab gained experience using the helicopter in order for the company to make the final step in catching a falling rocket out of the air during a future mission.

Bearing the distinctive red stripes of a reusable Electron, the booster splashed down about 370 kilometers (200 nautical miles) offshore. The Love at First Insight mission features several recovery-related improvements to the rocket, including a more durable parachute that will deploy earlier than on previous missions in order to give recovery teams more time to observe the test. 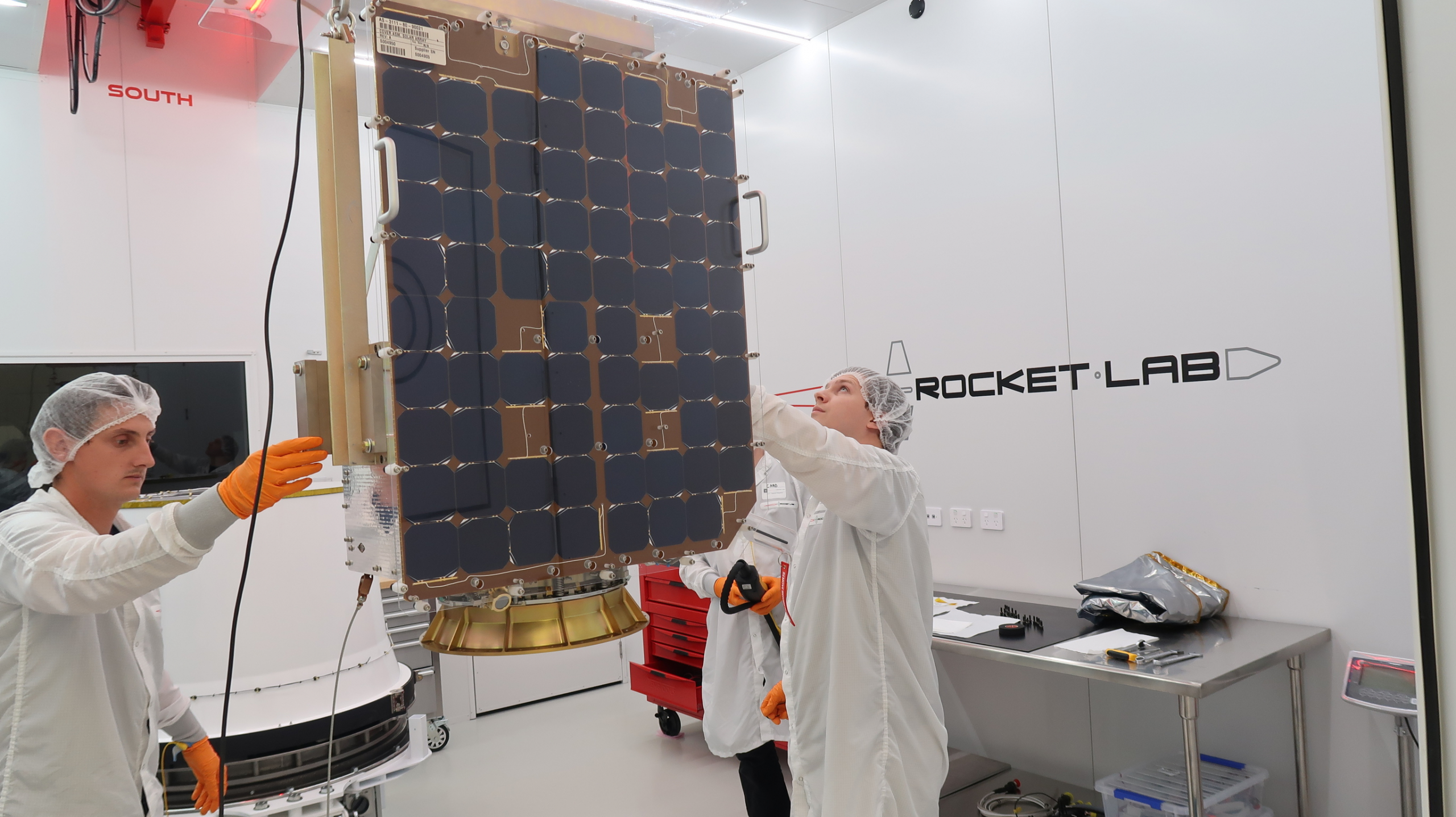 With Electron’s first stage successfully recovered, Rocket Lab will likely re-use some components of the booster on future missions, as they have done with components from the stages they have previously recovered.

Rocket Lab also debuted a stretched upper stage on Electron with this flight, with the tank section of the rocket’s second stage visibly longer in order to store more propellant.

The launch began with the ignition of the nine Rutherford engines that power Electron’s first stage at the T-2 second mark in the countdown. At T-0, Electron lifted off from Launch Complex 1A (LC-1A) in Mahia to begin its roughly hour-long flight. 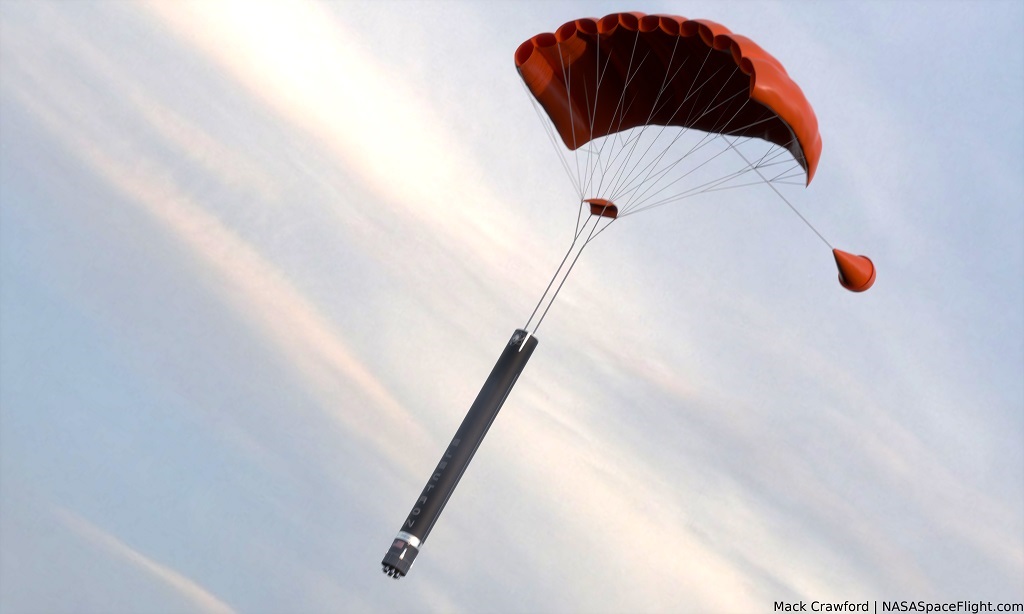 While the second stage continues towards orbit, Electron’s first stage used cold gas thrusters to control its orientation for re-entry. It reached apogee and began descending about four minutes and 40 seconds after launch. During re-entry, Electron’s first stage travelled up to eight times the speed of sound and experienced heat of up to 2200 degrees Celsius.

Seven minutes and 37 seconds after launch, flying about 13,000 meters above the ocean, the first stage released a drogue parachute in order to stabilize the rocket and aid in its deceleration as it transitions back to subsonic flight. The main parachute deployed 44 seconds later, and the recovery helicopter moved in to visually identify the stage and gather data.

Electron’s first stage successfully splashed down in the Pacific Ocean about 19 minutes after launch. Recovery teams aboard the ship Seaworker then lift the stage out of the sea using the Ocean Recovery and Capture Apparatus (ORCA). From there, the recovered first stage will be delivered to the company’s production site in New Zealand for further inspection.

Meet ORCA, our Ocean Recovery & Capture Apparatus for today's Electron recovery mission. This hydraulic cradle acts as a recovery-optimized strongback to safe Electron's booster, bring it out of the water, and keep it in place onboard our vessel for the trip home. pic.twitter.com/avFqjZ12ud

Meanwhile, in space, Electron’s second stage completed its burn and deployed the kick stage. Around 51 minutes and 40 seconds mission elapsed time, the kick stage began a 94-second burn of its Curie engine to circularize its orbit. Spacecraft separation occurred about 55 minutes after launch, with the upper payload separating first, followed by the adaptor, and then the spacecraft in the lower position.

Rocket Lab’s next launch, A Data With Destiny, is currently scheduled for no earlier than November 27 and will carry two more BlackSky Global satellites. Another dedicated launch for BlackSky, the final confirmed mission of the multi-launch deal will follow no earlier than December.

(Featured image: Electron lifts off on the Love at First Insight mission — via Rocket Lab)