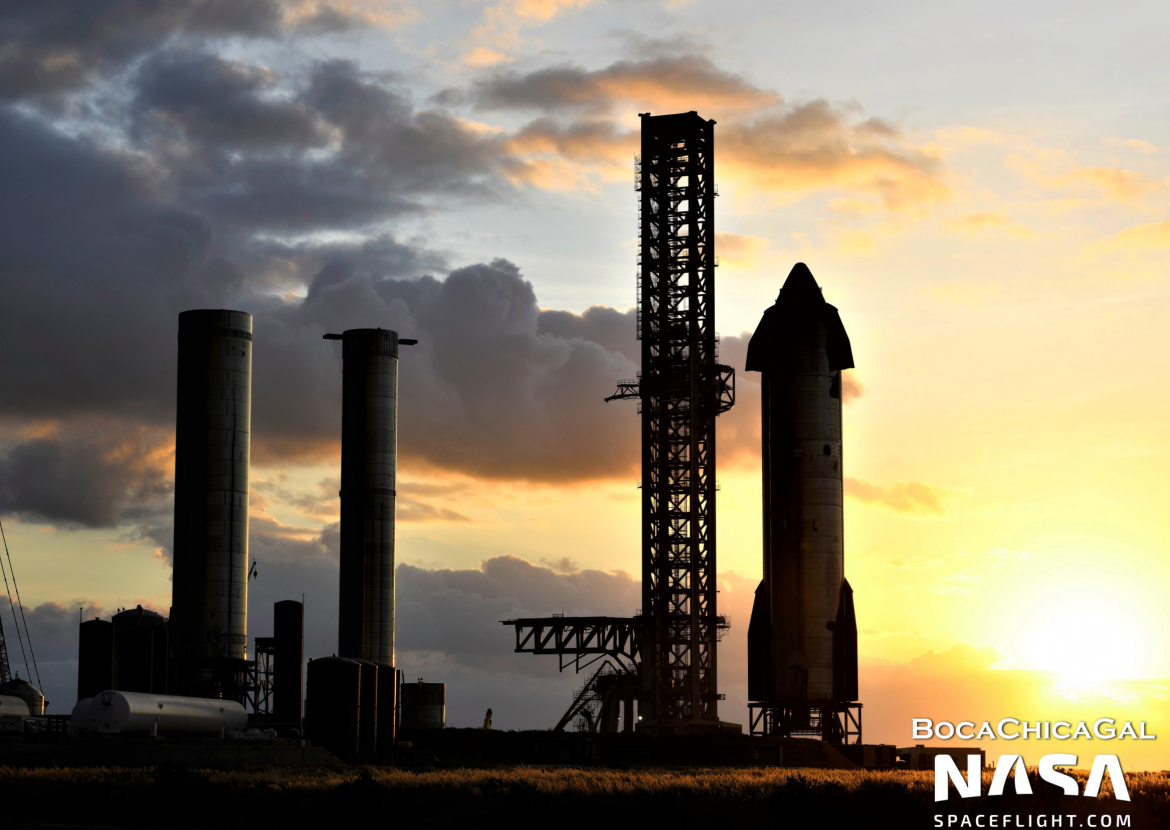 SpaceX is lining up a fleet of vehicles for an ambitious 2022 test campaign, opening with the first orbital velocity test in January or February, followed by the potential of around 12 flights during the year.

Backing up that ambition is the production cadence at Starbase, with sections for Ship 24 recently spotted while numerous additional vehicle sections – such as a herd of nosecones – are amassing inside the production tents.

The current plan is to fly Booster 4 with Ship 20 on an orbital velocity test, ending with a splashdown landing. The Booster will land in the Gulf of Mexico, while Starship will return around 100 km off the northwest coast of Kauai, Hawaii.

Numerous milestones will be undertaken with this first flight of the full-stack Starship vehicle, with the launch under the Booster’s 29 Raptor engines, ascent trajectory control, staging, Starship ignition, and return just some of the highlights.

Getting Starship up to orbital velocity will be the ultimate win, although there will be valuable data points throughout every stage of flight.

Unlikely for early ships to splashdown intact. Getting to orbit at all on first try would be a major win.

Liberation of Thermal Protection System (TPS) tiles also appears to have been chiefly mitigated based on that test, with Ship 20’s heat shield appearing to be in fine shape ahead of its next event, expected to be stacking with Booster 4.

That Super Heavy continues to wait patiently near the Orbital Launch Site (OLS) mount, one of the focal points for ongoing work on Stage 0.

Although the first launch attempt won’t result in a capture by the “Mechazilla” chopsticks, the stacking of the Booster and Ship is set to be conducted by that device as designed.

The first operation will involve stacking Booster 4 onto the mount ahead of a Static Fire test campaign, with the latest processing involving the installation of aerodynamic covers over the exposed aft hardware of the vehicle. 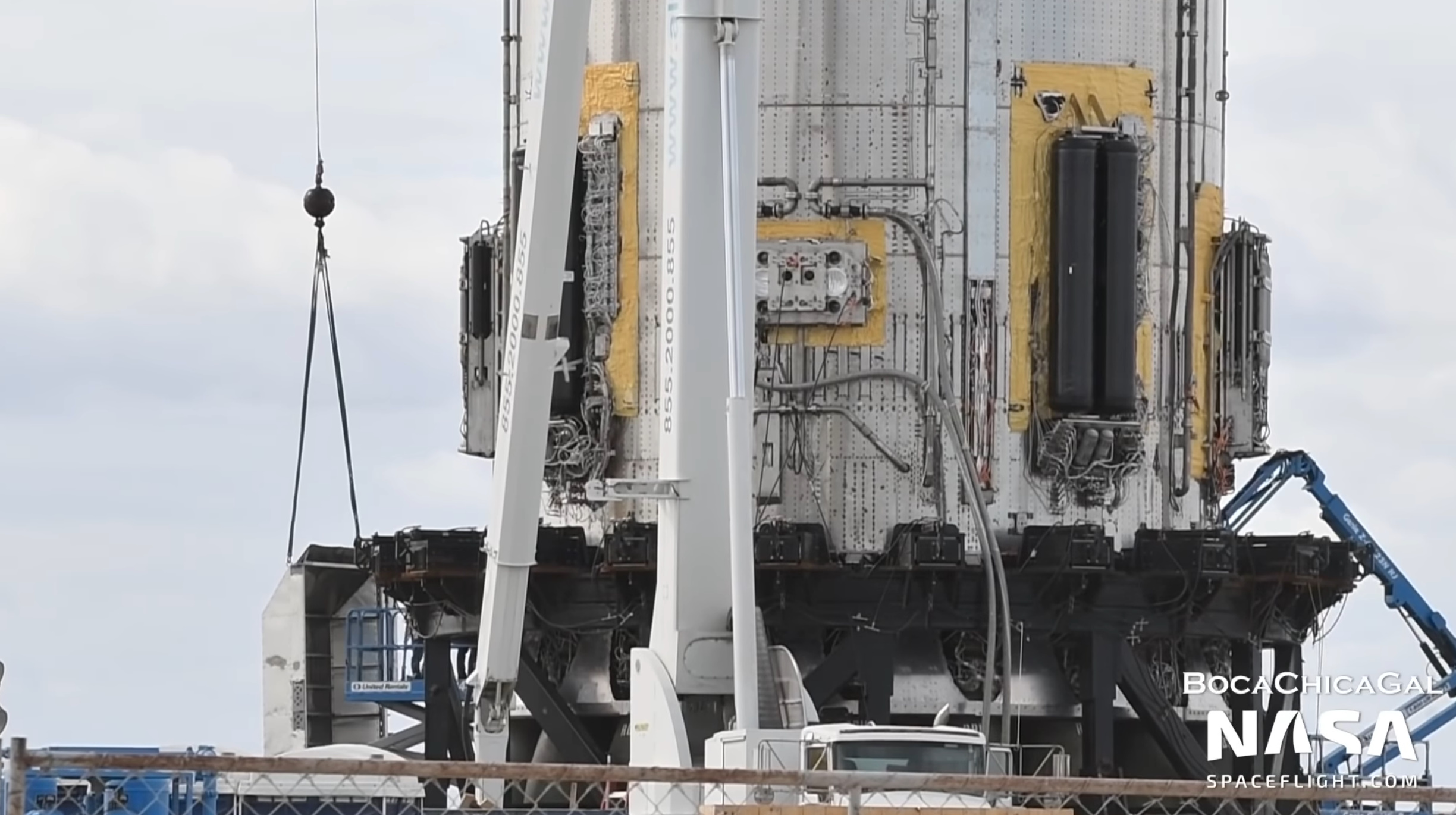 Aero covers being moved for installation on Booster 4 – via Mary (@bocachicagal) for NSF.

The protective panels installed around the outer Raptor Boost engines are also on show, tasked with protecting the Raptors during atmospheric re-entry.

Work on the mount has been ongoing, with a mix of welding, installation, Quick Disconnect (QD) tests, and even a visually impressive vent being observed over recent days.

The latter was related to proofing tests of the newly-installed plumbing.

Booster 4 will require proof testing, cryo testing, and potentially several Static Fire tests with increasing amounts of engines being fired up – through to the full 29 engine set. The decision will then be made on stacking Ship 20 atop the Booster.

Compared to the full-stack fit check undertaken in August, additional milestones will become the focus during this stage of preparations for a potential flight.

Ship 20 will be hooked up to the Quick Disconnect (QD) system partway up the Launch Tower. In addition, lines – which will supply “fluids and electrical” connections to the Ship’s aft – are being installed on the arm, which will also provide stability to the stacked vehicle.

Amid Elon Musk’s traditionally ambitious timelines, his recent interview with the National Academies of Sciences’ Space Studies Board and the Board on Physics and Astronomy provided an update to the schedule.

With the hope the FAA will conclude its Environmental Assessment process by the end of the year, Elon Musk cited January “or perhaps February” as the current target for the orbital launch attempt.

There also remains the option that Booster 4 and Ship 20 will only be used for ground testing, likely a decision point following the upcoming tests at the Orbital Launch Site.

Should that become the scenario, Starbase – as has become its routine during the Starship prototype program – has Booster 5 and Ship 21 waiting in the wings.

Booster 5 has now been fully stacked in the High Bay, concluding primary assembly on the vehicle.

Ship 21 resides in the Mid Bay, patiently waiting for room in the High Bay.

The next expected milestone for Ship 21 is the installation of its aero surfaces, followed by the mating of its nosecone, which takes place inside the taller High Bay facility.

The nosecone is in the final stages of receiving its TPS tiles and again appears to be benefiting from the previous processing flows via the appearance of a very clean-looking tile installation compared to Ship 20’s initial process. 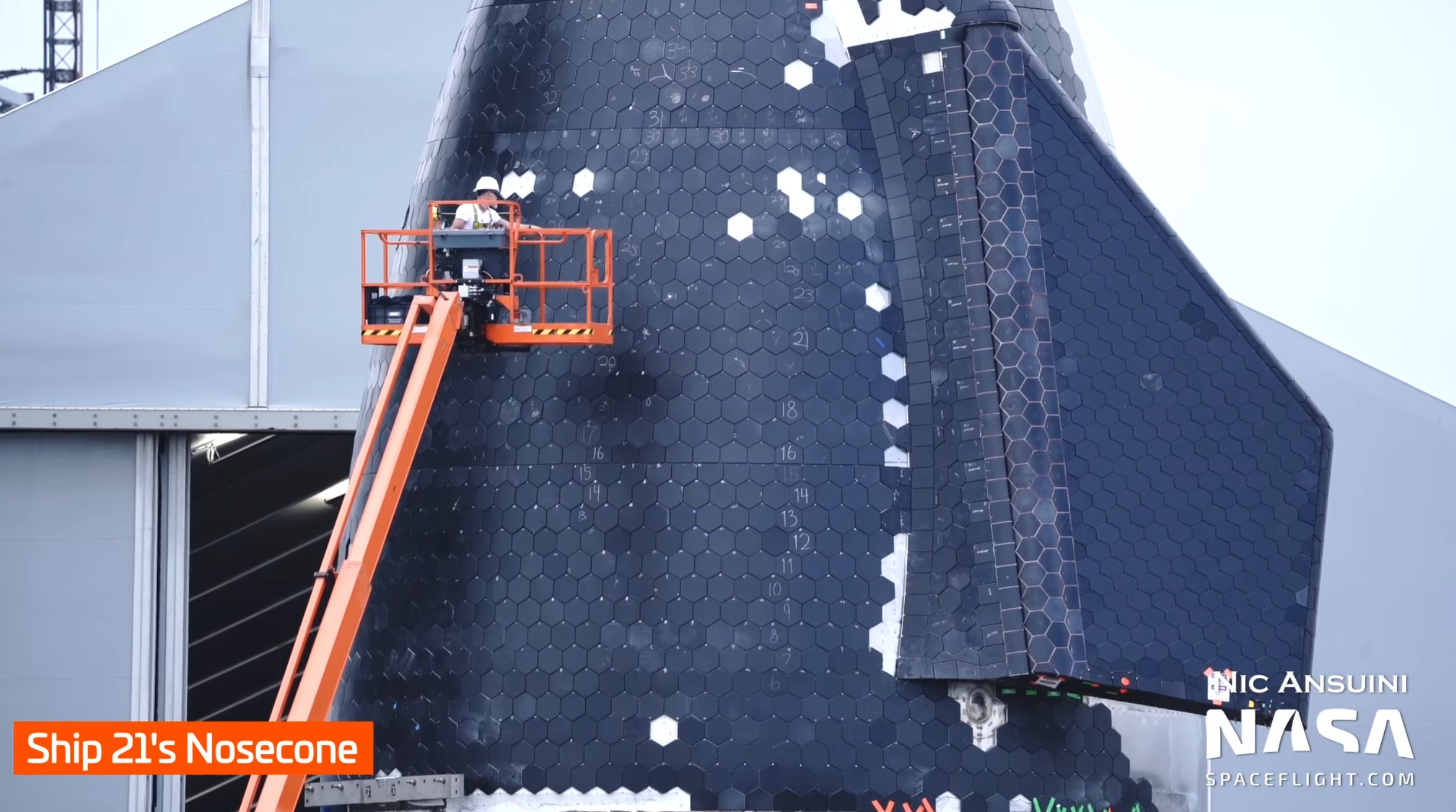 Keeping Ship 21 company in the Mid Bay is a new stablemate, Ship 22.

Stacking of that vehicle is now taking place, a clear sign of intent in the tradition of Starbase, ultimately resulting in ready-to-roll vehicles in the event one is lost at the launch site during testing.

Booster 6’s forward dome was sleeved on November 11, while parts for Booster 7 have been spotted around the site as well.

However, the production cadence is even more impressive when looking around the Production Tents, with multiple nosecones inside the buildings and sections for vehicles up to Ship 24 now being prepared.

NSF’s Nic Ansuni spotted the Common Dome of that future Starship during the week.

Lots of starships in the works…

SpaceX was well aware of the projected increase in production cadence and has started to build a new processing facility, nicknamed the “Wide Bay.” 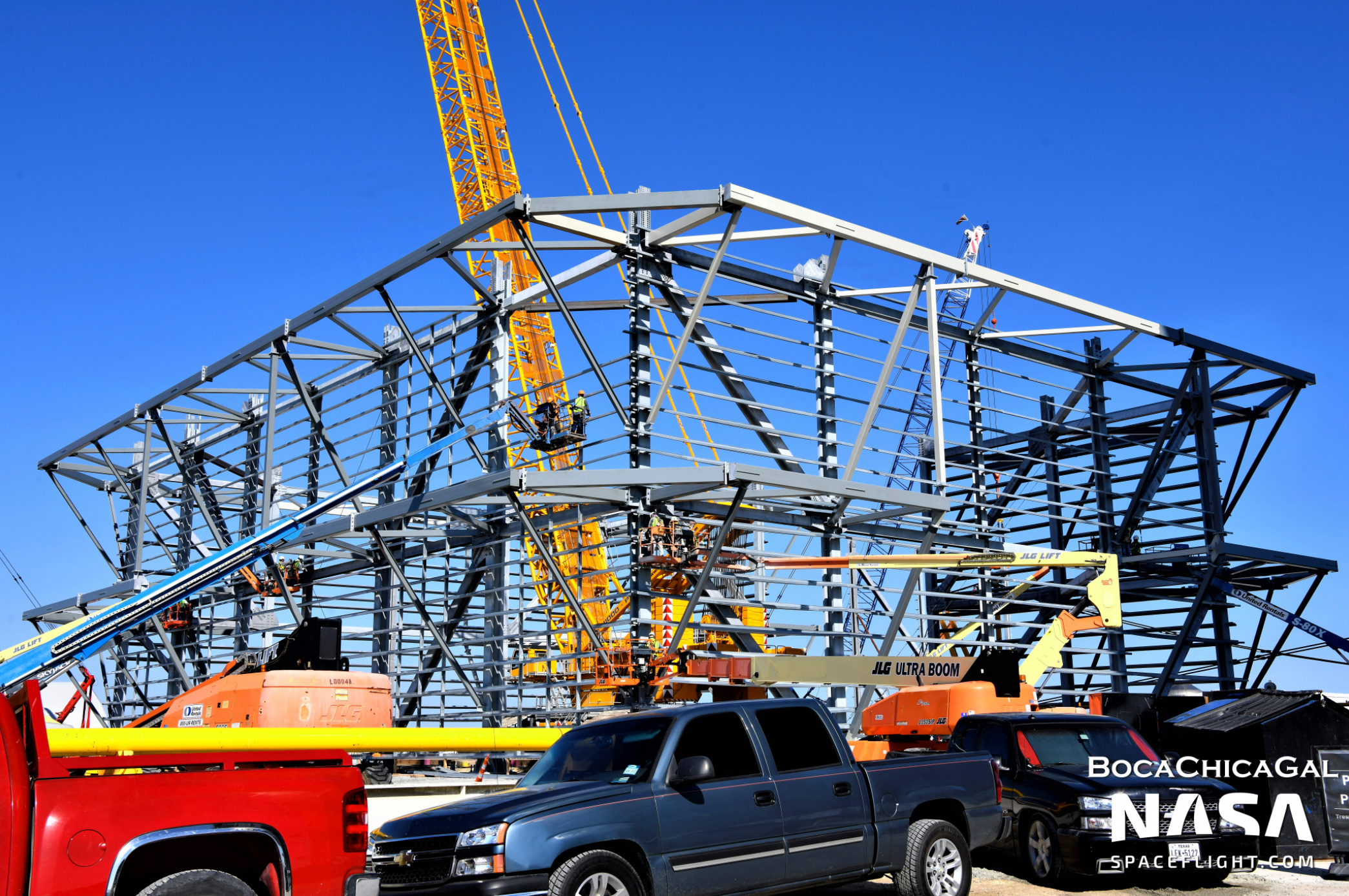 Wide Bay fast rising out of the ground at Starbase, via Mary (@bocachicagal) for NSF.

Based on the current pace, the “Wide Bay” is likely to be ready to support processing operations early next year, ahead of the busy test launch schedule.

As cited by Elon Musk during his recent interview, the main bottleneck is the production of the Raptor engines that will fly with the 2022 manifest. “Engine build rate is currently the biggest constraint on how many vehicles we can make,” he noted.

This morning there was a MEGA-rumble heard from the rocket engine test stands of @SpaceX McGregor! (8:46am CST)

With the Booster set to move from 29 to 33 engines, along with the advancement to the Raptor 2 engine, a new Raptor factory is being built at SpaceX’s test site in McGregor, Texas.

The engines also test-fired at this facility, with daily roars from one of the five test bays. One engine spotted by NSF’s Gary Blair for NSF’s L2 McGregor section is potentially named RC102, although it’s hard to confirm via the aerial photo taken from a distance. 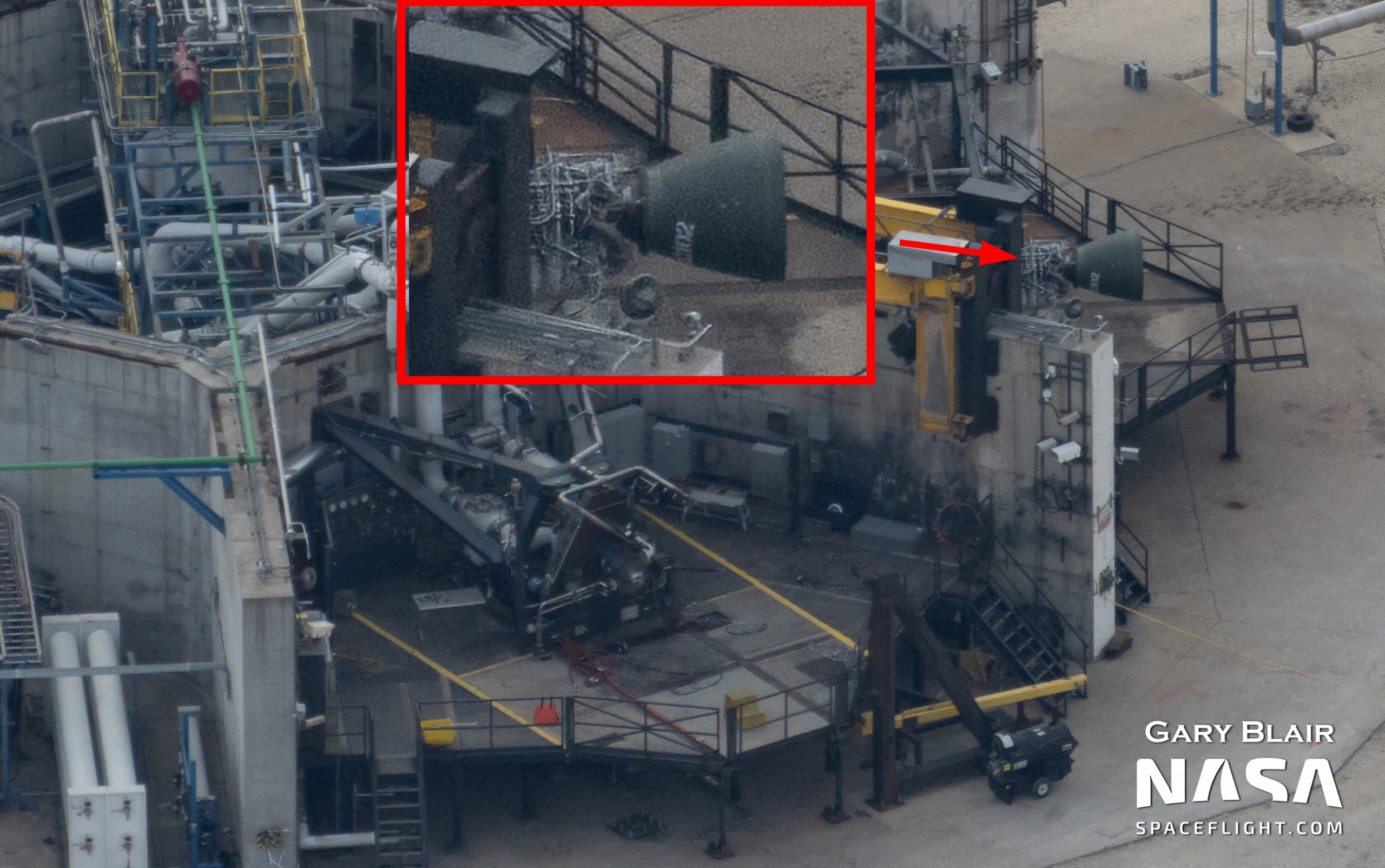 Another new Raptor on the original vertical Raptor stand, via Gary Blair for NSF.

Although the Booster and Ship will eventually return their Raptors via a successful landing, such a milestone is not expected during the initial attempts. However, SpaceX hopes to complete its test flight program during 2022 before moving into operational missions with payloads the following year.

Regardless, SpaceX needs to “make lots of Starships and make lots of engines in parallel,” as noted by Elon Musk.

However, the focus remains steadfast, with the creation of a rapidly reusable interplanetary launch system involving around one thousand Starships to achieve Musk’s primary goal of making life multi-planetary.

Elon: "Starship is designed to be a generalized transport mechanism for the greater solar system."