Booster 4 returns to the Launch Mount ahead of test campaign 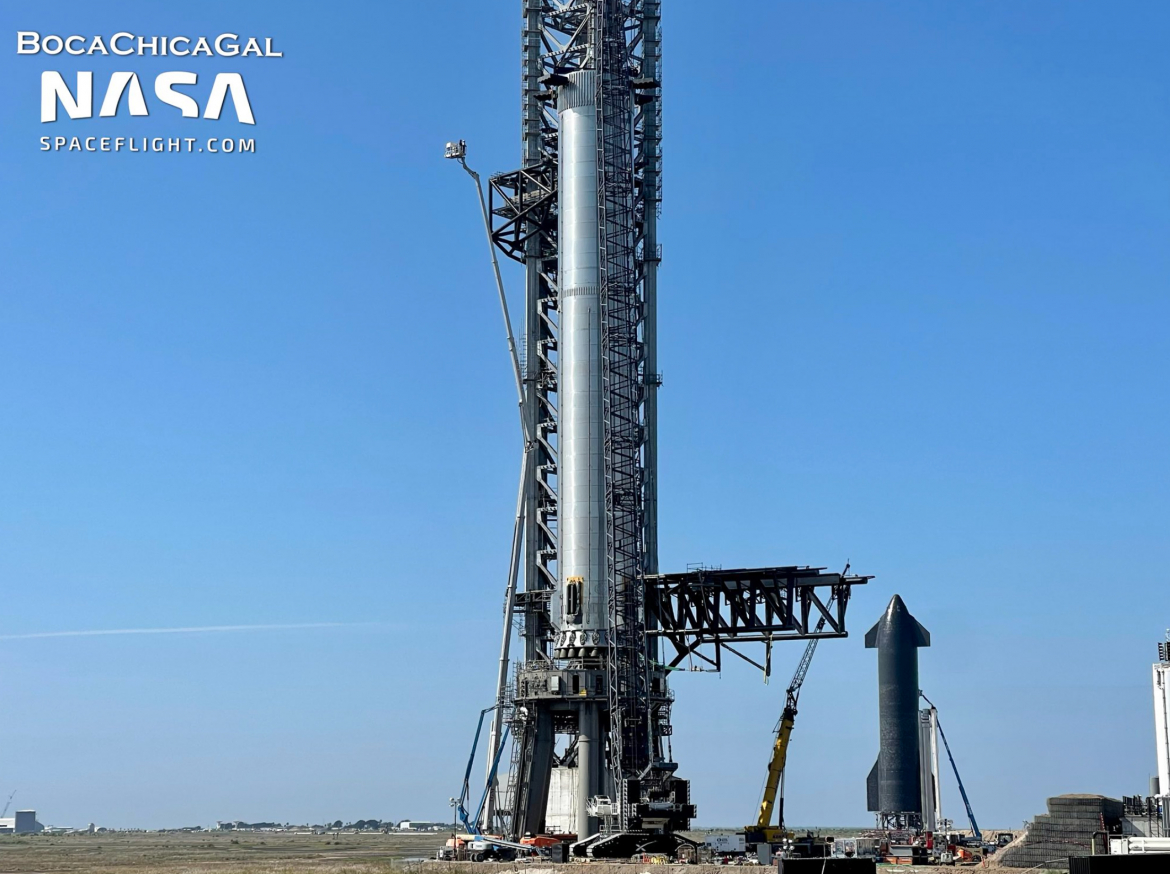 Super Heavy Booster 4 has returned to the Orbital Launch Mount (OLM), this time for an expected series of Static Fire tests.

Having previously taken up its place on the OLM for fit checks, including the first-ever integration with Ship 20 to complete an impressive full-stack, the latest move is set to pave the way for a series of tests – including on the Ground Support Equipment (GSE) – required ahead of flight.

Booster 4 had been sat patiently on a stand located near Ship 20, allowing for additional processing work to be carried out without interrupting the ongoing efforts at the Orbital Launch Site (OLS).

Signs of a move first began when the new SpaceX LR11000 crane hooked up its load spreader and conducted a test attach with the top of the Booster before releasing its grip.

Then, on Sunday – likely timed after the passing of a cold front over Starbase – the crane made a move on its own towards the OLS, with Booster 4 following soon after on the Self-Propelled Modular Transporter (SPMT).

Hooked back up to the load spreader on Sunday evening, the stage was set for the return of Booster 4 onto the OLM.

This occurred on Monday, with the process taking far less time than the initial lift for the fit check event.

Sporting 29 Raptor engines, Booster 4 promises an advancement of SpaceX’s Starship milestones. To date, the maximum amount of engines fired at any one time has been six, with Ship 20 conducting a full set Static Fire test with its three sea-level Raptors and three RVacs.

While the sequence is unknown, a progressive amount of engines firing in tandem may be in the offing, all the way up to the tantalizing prospect of a full-set, 29-engine firing.

What a beautiful day for a booster lift!

A considerable amount of data will be gained from such a ground test campaign, including how the large gang of engines react when fired up together.  Elon Musk has cited, during his interview after winning TIME’s “Person of the Year” award, that he has concerns relating to “if one engine catches fire, we want to ensure that fire does not spread through the entire volume.”

The shielding at the base of the Booster has been modified in recent processing, although the test can only be achieved during Static Firing.

Ship 20 remains ready to be mated with Booster 4, should the duo gain the required approval to proceed towards an orbital test launch, although numerous options are open to SpaceX. 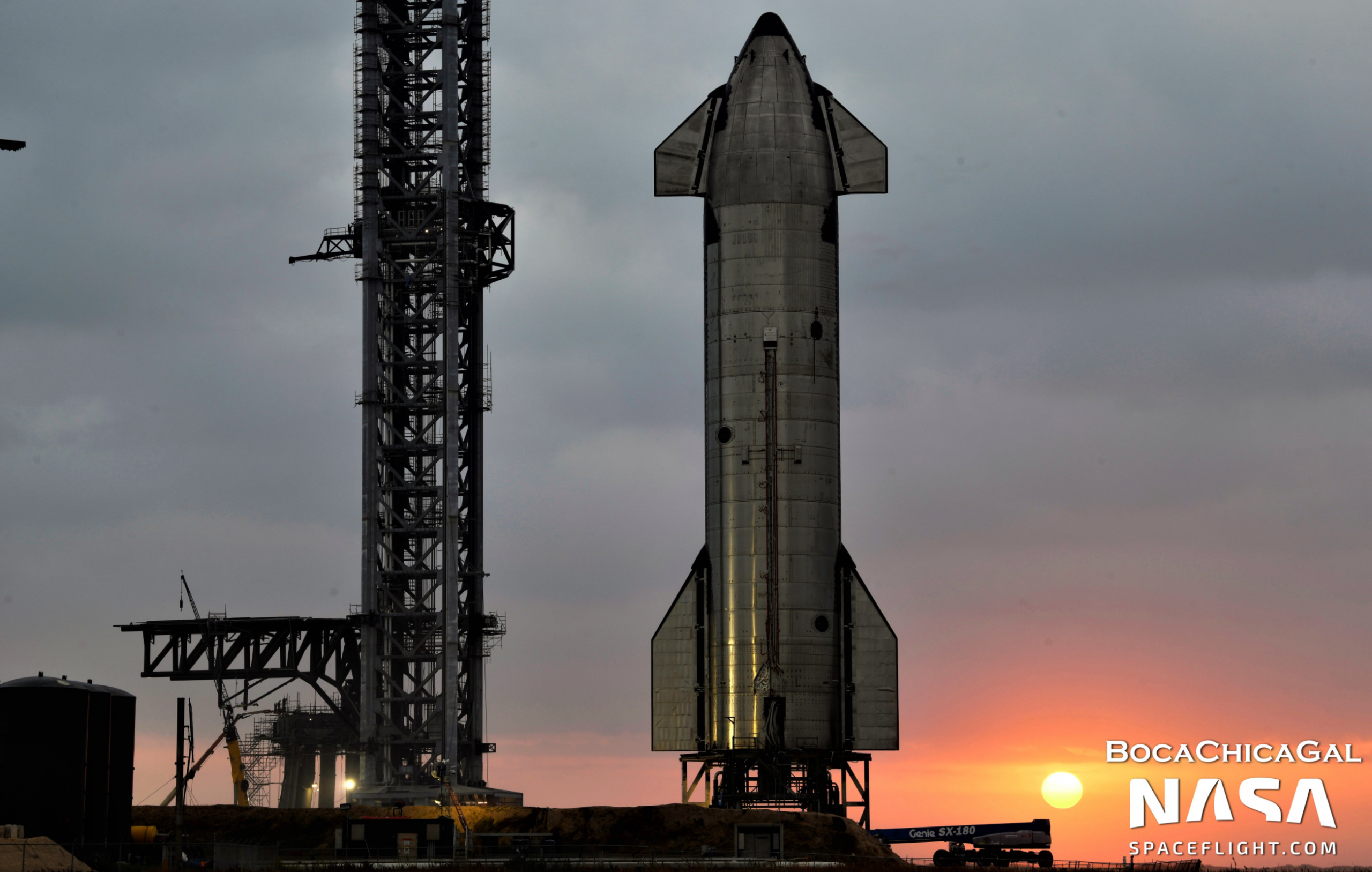 Ship 20 via Mary (@bocachicagal) for NSF

As part of the standard production cadence at Starbase, numerous vehicles are in various stages of preparation – or scrapping – as can be expected with a test program of this nature.

Booster 5 departed the High Bay before promptly taking a trip towards the retired Ships 15 and 16. As such, its fate is not yet known.

Booster 6 has since become a test tank, with its forward dome and common dome sections joined outside the Mid Bay. It was then moved into the High Bay on December 10th.

The purpose of this test article is unknown.

This leaves Booster 7 as the next Super Heavy set to be stacked in the High Bay. Sections for this vehicle have already been spotted.

Based on the rejig of the Boosters, the running order from Booster 4 and Ship 20 could potentially become mismatched.

Ship 21 was already deep into processing inside the Mid Bay, while TPS (Thermal Protection System) work has been completed on the nosecone. 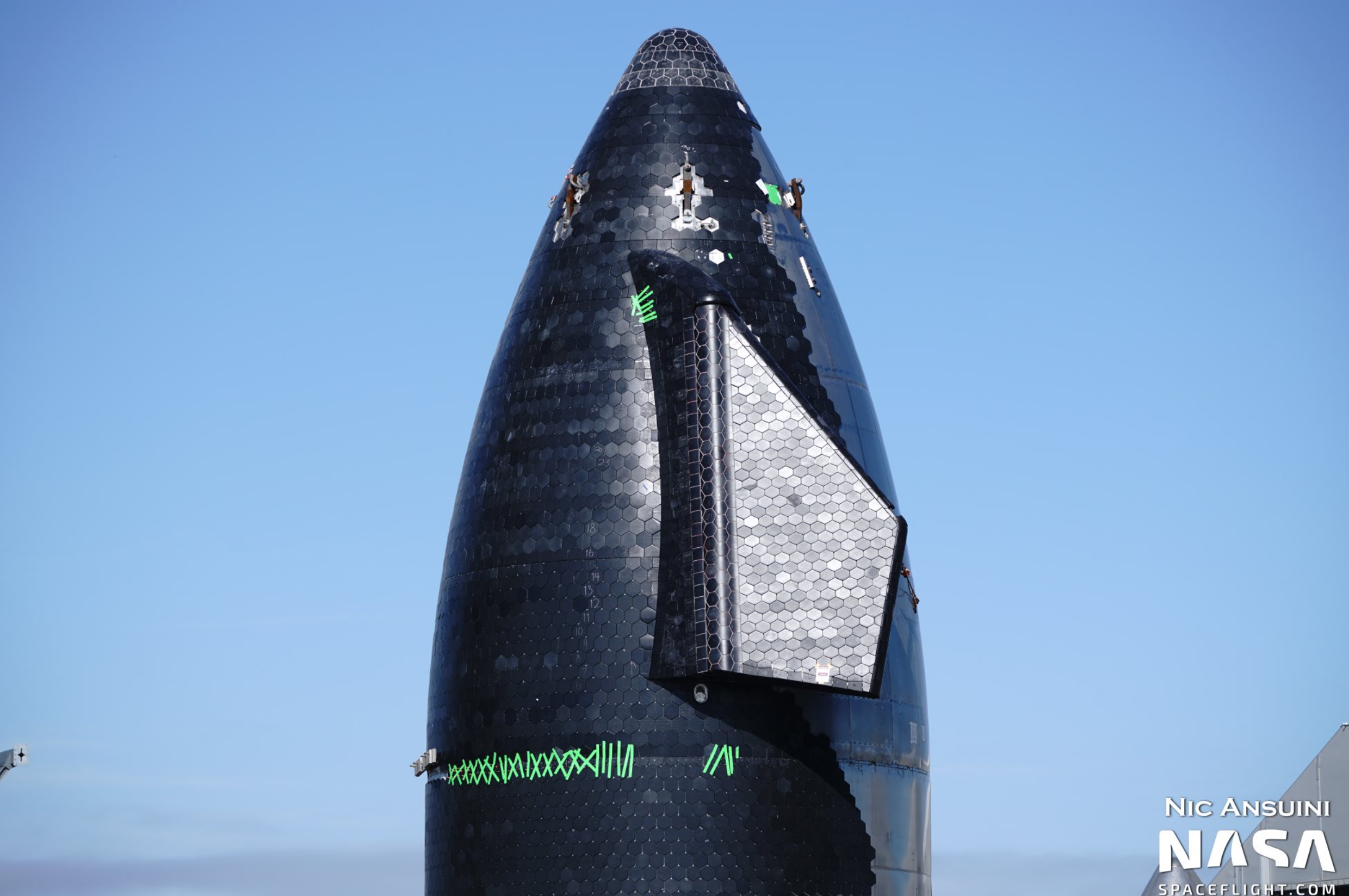 Ship 21’s nosecone and TPS – via Nic (@NicAnsuini) for NSF

The next expected milestone would be to mate the two inside the since-vacated High Bay. Ship 22 is also being prepared inside the Mid Bay.

While sections for numerous vehicles remain out of sight inside the Production Tents, the common dome section for Ship 24 has been spotted. This vehicle is expected to debut unspecified upgrades to Starship. 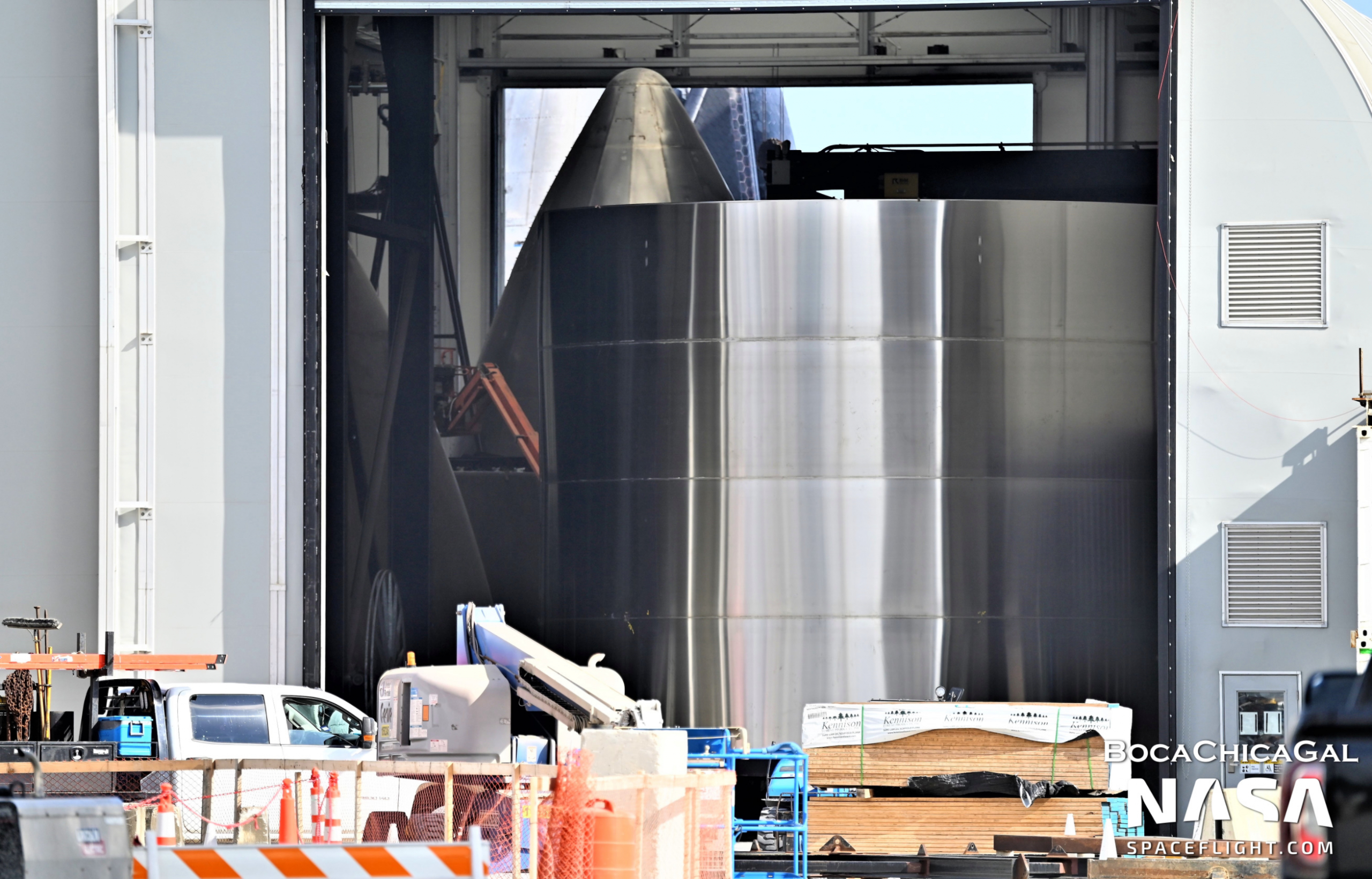 The actual path for Starship testing is likely to be fluid. It may only become more transparent when Elon Musk provides his next overview presentation, which he admitted is overdue.

However, the clear signs of progress will be apparent, following his previous overview being conducted under the shadow of the MK1 Starship prototype just over two years ago. The next overview will be conducted next to flight-capable vehicles and a production and launch site that has grown exponentially over the last few years.

The path to the prize of achieving orbital velocity with Starship will require more than just regulatory approval and vehicle readiness, with the Ground Support Equipment (GSE) a fundamental piece in the jigsaw.

Preparing “Stage Zero” has taken time, but understandably so with the structures designed not only to host, fuel, and launch the world’s most powerful rocket but also to catch and relaunch what is a fully reusable launch vehicle.

The recent focus has been on the Booster Quick Disconnect (QD), which is hosted on the OLM and will provide fueling and electrical connections to the base of the Booster.

The QD for Ship is located on an umbilical arm higher up the launch tower.

Ongoing work with the Tank Farm has continued, ready to supply the hungry rocket with Liquid Oxygen (LOX) and Liquid Methane (CH4) on launch day.

While the Tank Farm can often be seen – and heard – venting during preparations for its upcoming role, new additions continue to arrive on site.

The most intriguing piece of new equipment was a new multi-stage pump, sporting five bulges, likely to be impeller housings.

All of the work at the OLS is being staged ahead of hosting multiple launches in 2022. Elon Musk wants this coming year to complete the test flight milestones for the vehicle ahead of entering its operational phase.

Although the first test launch will result in the Booster and Ship being expended into the ocean, the forward goal of catching returning vehicles will be carried out by the “Chopsticks” on the “Mechazilla” system. 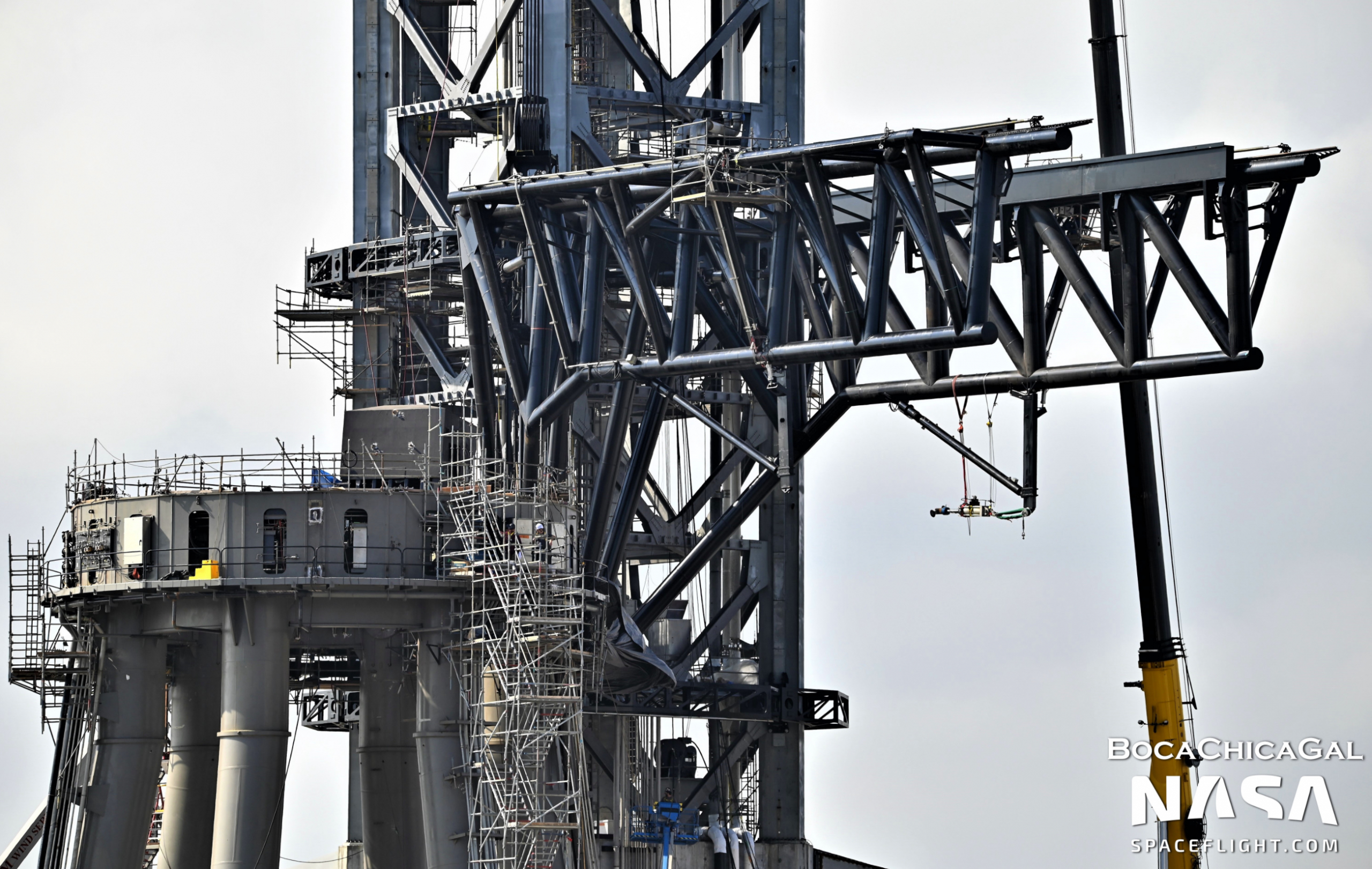 Stage Zero and the Chopsticks – via Mary (@bocachicagal) for NSF

It was hoped that Booster 4’s return on the OLM would provide the Chopsticks with its first test. However, a large amount of scaffolding remains on the tower, precluding opportunities to raise the arms to place the Booster on the mount.

If any additional signs of preparations for a highly ambitious launch cadence were required, the new High Bay – twice as wide and slightly higher than the current High Bay – is now deep into its construction phase.

I'm never going to complain about assembling a wardrobe again!

This new building will allow for multiple, parallel processing and stacking flows, catering for a procession of Boosters and Ships heading down to the launch site for stacking.