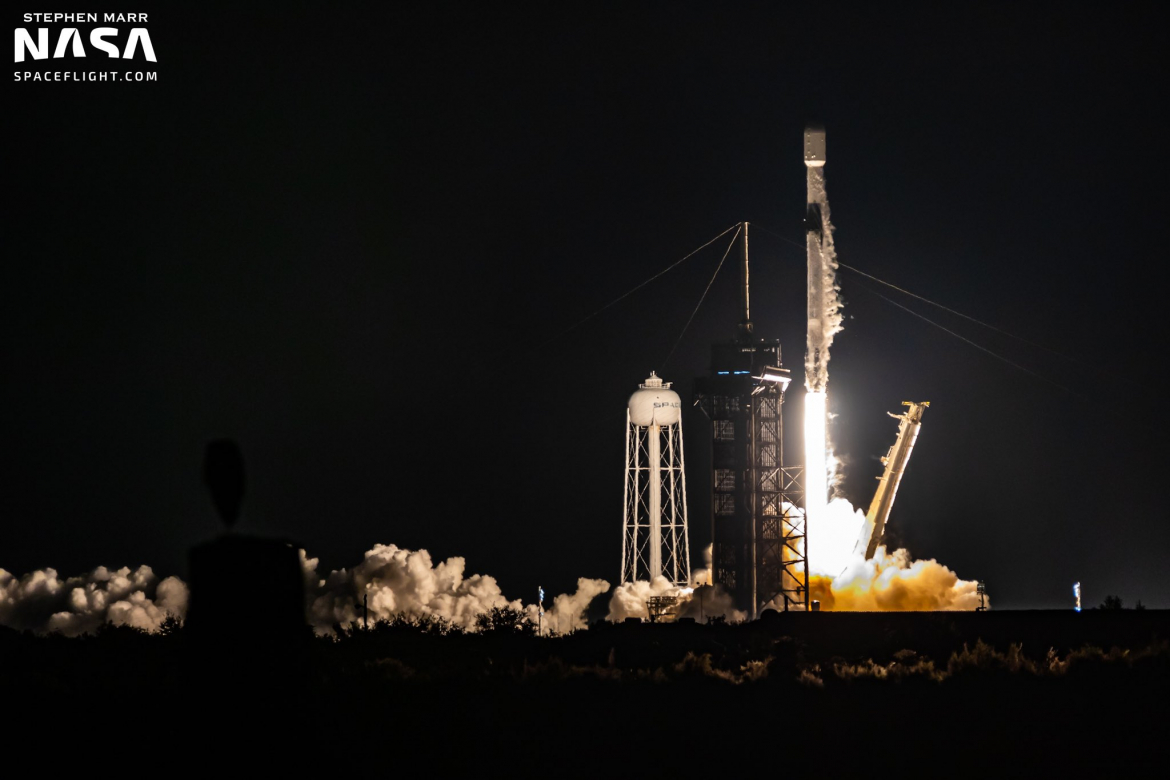 IXPE is a 325 kg, three-telescope polarized x-ray observatory. A joint venture between NASA and the Italian Space Agency, IXPE will help the astronomical community better understand the physics behind — and formation of — black holes, neutron stars, supernova remnants, magnetars, and pulsars by specifically looking at polarized x-rays surrounding the objects.

The Falcon 9 first stage supporting this launch was B1061-5, making its fifth flight to space. The booster previously supported NASA’s Crew-1, Crew-2, and CRS-23 missions to the International Space Station, as well as the SXM-8 mission in June 2021.

The 45th Weather Squadron predicted a 90% chance of acceptable weather at the time of liftoff. The 10% concern in the forecast is due to the cumulus cloud rule.

Drone ship support and fairing recovery vessel Bob was also stationed approximately 750 km downrange and will locate the two new Falcon 9 fairing halves and recover them for return to Port Canaveral, where they will be refurbished for reuse on a later mission.

After reaching an initial parking orbit of 600 km (+/- 15 km) inclined 28.5 degrees to the equator, the Falcon 9 second stage entered a coast period.

Re-igniting at T+28 minutes 51 seconds, the second stage’s second burned for 60 seconds to lower the orbital inclination to 0.2 degrees of true equatorial. This propellant-heavy maneuver is what prevents the first stage from being able to Return To Launch Site (RTLS) land for its recovery, despite the small spacecraft, as more propellant is needed by the second stage for the inclination change.

“IXPE is in a low Earth orbit because — there are a number of reasons, but the primary reason is it’s a Small Explorer,” said Dr. Martin Weisskopf, Principal Investigator for the IXPE mission and chief scientist for X-ray astronomy at NASA’s Marshall Space Flight Center, in an interview with NASASpaceflight.

“IXPE cost $160 million to build. So we don’t have a launch vehicle that can put us in this wonderful high orbit. So we’re going into low Earth orbit, which is quite nice for another technical reason: the ground station that’s provided to us by the Italian Space Agency at Malindi off the coast of Kenya is at the equator, and we’re going to go to the equator.”

“And we also want to be at the equator because that’s the lowest background. We spend the least time in the radiation belts.” 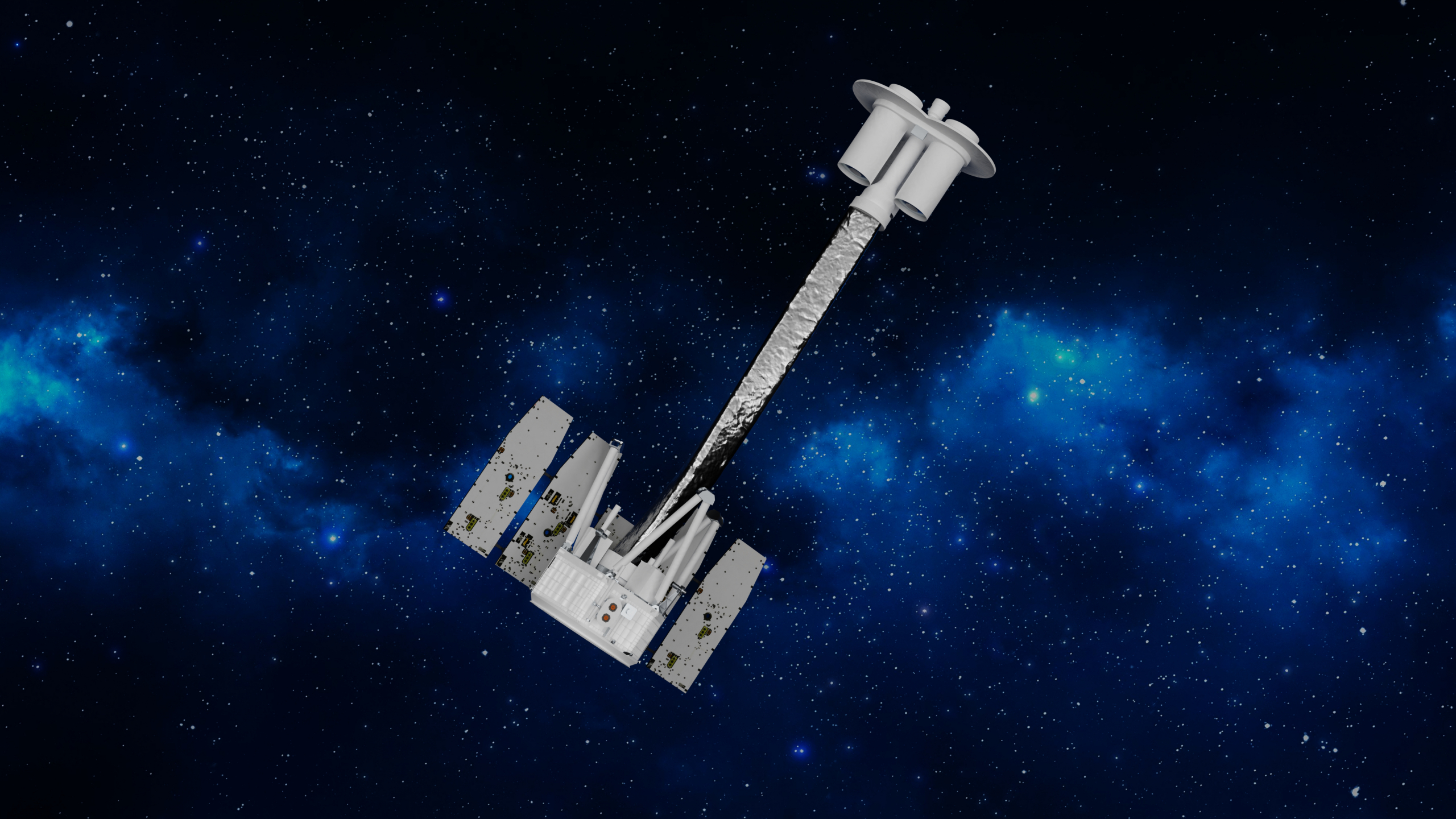 After performing the inclination change maneuver, the Falcon 9 second stage will orient itself for IXPE separation, scheduled to occur at the T+33 minute 22-second mark.

After this, a 30-day commissioning phase will begin, starting with solar panel deployment so that the vehicle is power positive. This step actually dictates the night launch time for the mission, as the payload needs to be in orbital daylight at payload separation and solar panel deployment.

“After about a week, we will be doing the extension of the coilable boom, which is going to be very exciting, shall we say, because that has to work,” said Dr. Weisskopf. “Now we’ve extended it on the Earth six times successfully, so we’re pretty confident. But I will be holding my breath for a little bit during that extension. It doesn’t take very long, about a minute or so.”

And if the boom were to not deploy?

“That’s the end of the mission,” related Dr. Weisskopf. However, “if the boom deploys and doesn’t deploy quite right, we have a mechanism that we refer to as the Tip/Tilt/Rotate Mechanism. It will allow us to realign the x-ray telescopes with respect to the detectors.”

“So if something, relatively, goes wrong there, we can adjust for that. But it has to deploy, but it may not deploy right or it may be that we underestimated the thermal environment and things are kind of bending around. That’s not the end of the mission.”

After boom deployment, teams will work through spacecraft check out and commissioning which will take approximately seven days. Thereafter, the detectors will be brought online and calibrated.

But IPXE is a first-of-its-kind mission. There are no known objects to really calibrate it against like optical, infrared, and even other x-ray telescopes have. So how do you calibrate IXPE?

The answer is that part of the calibration took place on the ground, with the detectors first being calibrated in Italy and then the optics being calibrated by the Marshall Space Flight Center in a test facility that was developed specifically for IXPE.

This ground-based calibration was used for both polarized and unpolarized x-ray sources that the telescope will observe.

“As part of that calibration, we also took one extra optics and one extra flight detector and put them together and repeated the x-ray calibration to see if we took the results of the optics and the results of the detector and put them together analytically, and then did it together in x-rays, then did it work? Yes, it worked. So that’s wonderful,” enthused Dr. Weisskopf.

“On orbit, IXPE also has x-ray sources, radioactive sources, and polarized sources with the crystals and radioactive sources. So we can, onboard, recalibrate the sensitivity to polarization. And of course things like the gain or the amplitude of signals for a given energy, that kind of thing. So we do both on the ground and in orbit.”

“So we’re the first real polarization instrument that’s been calibrated on the ground and can verify its calibration on orbit,” related Dr. Weisskopf. “So the targets where we measure polarization from, those will be standards for future experiments. But we really don’t have a standard.”

Once commissioned, IPXE will be ready for its mission to measure the polarization of x-rays. And this is done through the Gas Pixel Detectors.

“They’re the reason that this mission works!” exclaimed Dr. Weisskopf. “This is the contribution from my Italian colleagues is this gas pixel detector and the fact that it’s sensitive to polarization.”

So how does this work?

“An x-ray comes in [to the three telescopes] and ionizes the [centimeter-thick dimethyl ether] gas [in the Gas Pixel Detectors]. It releases a photoelectron in the gas. That photoelectron goes off in the direction of the electric field that’s attached to the x-ray photon, which is the direction of polarization. So this photoelectron goes roaring off in the gas, and it has lots of energy — essentially the energy of the x-ray, minus a little bit to get it out of the shell.”

“And it starts ionizing more and more gas as it travels along the way. So we get a track of charge produced by the x-ray. The beginning of that track is in the direction of the electric field, i.e. the direction of polarization. And what this detector does is that it images the entire track and sends that data to the ground so we can analyze it and look at the track and see what was the initial direction.” 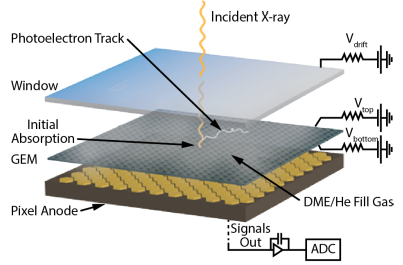 To pass through the gas layer, the x-rays must first pass through a thin, beryllium window, with beryllium being the element of choice due to its transparency to x-rays (greater than 90% efficiency), and the sealing action of beryllium to hold in the dimethyl ether gas — without which there would not be a detector.

So what is the overall point of IXPE? And how does it fit in the larger x-ray astronomy picture?

The answer is in its name: polarimetry.

“We’re adding two new variables to the astrophysicist’s tools to try to model the production of x-rays from these sources” related Dr. Weisskopf. “And that goes from black holes in binary systems to black holes at centers of galaxies to neutron stars.”

“So that’s really the main thing. We’re providing these two new parameters to add in to the mix. So you’ve got to tell me not only why does the energy spectrum look like it does, but why is the polarization the way it is?” added Dr. Weisskopf.

And that ties perfectly — as expected — perfectly to IXPE’s scientific objectives:

But critically, too, IXPE, also has a technical objective: to improve polarization sensitivity by two orders of magnitude over the x-ray polarimetry on the Orbiting Solar Observatory 8 (OSO-8) spacecraft.

“What that’s doing is comparing the sensitivity of these detectors to the crystal polarimeter that I flew on OSO-8,” said Dr. Weisskopf — who is also part of the ongoing Chandra X-ray Observatory mission.

“It’s a hundred times more sensitive to polarization from a source than the same source would have been with the OSO-8 crystal polarimeter. That’s where that comes in. So it’s proving, in a satellite flight, the viability of the technology.”

IXPE’s primary mission is slated to last two years, and the spacecraft was built by Ball Aerospace & Technologies around their BCP-100 spacecraft bus. Of the total 325 kg spacecraft mass at liftoff, 170 kg is payload.