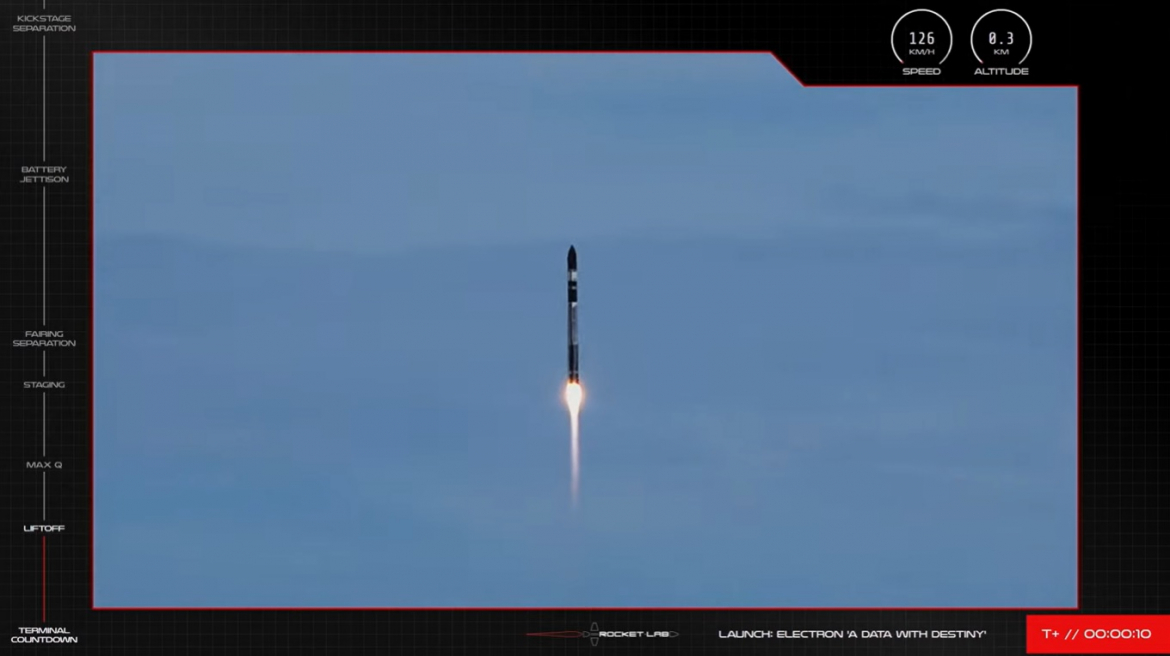 Rocket Lab has conducted its final orbital launch of the year, “A Data With Destiny.”  Liftoff of the Electron rocket occurred at the beginning of the launch window that opened at 7:02 PM EST on December 8, 2021 (00:02 UTC on December 9) from Rocket Lab’s Launch Complex 1 on the Māhia Peninsula in New Zealand.

This mission is the company’s fastest turnaround between launches, scheduled just less than 3 weeks after the launch of the “Love at First Insight” mission, which occurred in mid-November.  The payload for the mission was two Earth observation satellites for the geospatial intelligence company, BlackSky.

“A Data With Destiny” is the third in a series of dedicated launches conducted by Rocket Lab for BlackSky and Spaceflight Inc — which is providing integration and mission management services — as a part of a multi-launch agreement between the companies to rapidly expand BlackSky’s LEO constellation. Currently, the contract is signed for four such dedicated launches, with an option to add two more in the future.

The Electron rocket placed the two satellites into a 430-kilometer orbit, inclined 42 degrees to the equator.  The Gen-2 Earth-imaging satellites are high-resolution, multi-spectral satellites for the company’s Earth observation constellation.

Just like the last mission, an extended payload fairing and a payload attachment mechanism were used for this launch, allowing the satellites to be stacked on top of each other. In the company’s Electron Payload User’s guide, expanded fairings are listed as a “non-standard service,” and are only available for missions with at least a 12-month mission integration schedule.

The preparations for launch began at T – 6 hours before the estimated time of liftoff as the road to the launch site was closed. At T -4 hours, the Electron rocket was raised vertically as fueling operations began.  The vehicle uses RP-1 kerosene and liquid oxygen (LOX) as the propellant for its first two stages.

At T – 2 hours and 30 minutes, launchpad personnel exited the area as liquid oxygen loading into the Electron began.  Thirty minutes later, safety zones for the designated marine space were activated, just as the LOX was fully loaded.

At T- 30 minutes, safety zones were activated for the designated airspace, as teams at mission control proceeded towards a Go / No-Go poll just 12 minutes later. Once given the authorization to proceed, at T – 2 minutes, the launch auto-sequence began as the Electron’s onboard computers took control of the launch countdown.

Eight seconds later, the Kick Stage separated from the second stage, and the onboard Curie engine ignited at T + 50 minutes and 16 seconds. After a short 1 minute and 42-second burn, the kick stage entered the desired orbit where the two BlackSky satellites were deployed approximately 10 minutes later.

Following the successful demonstration of helicopter shadow operations, controlled splashdown, and retrieval operations in the last mission, the company plans to attempt an aerial capture of the Electron first stage using a helicopter during their next recovery mission, currently scheduled for the first half of next year. For this attempt, the recovery helicopter will include auxiliary fuel tanks for extended flight time as it plans to return the Electron first stage safely to the mainland. 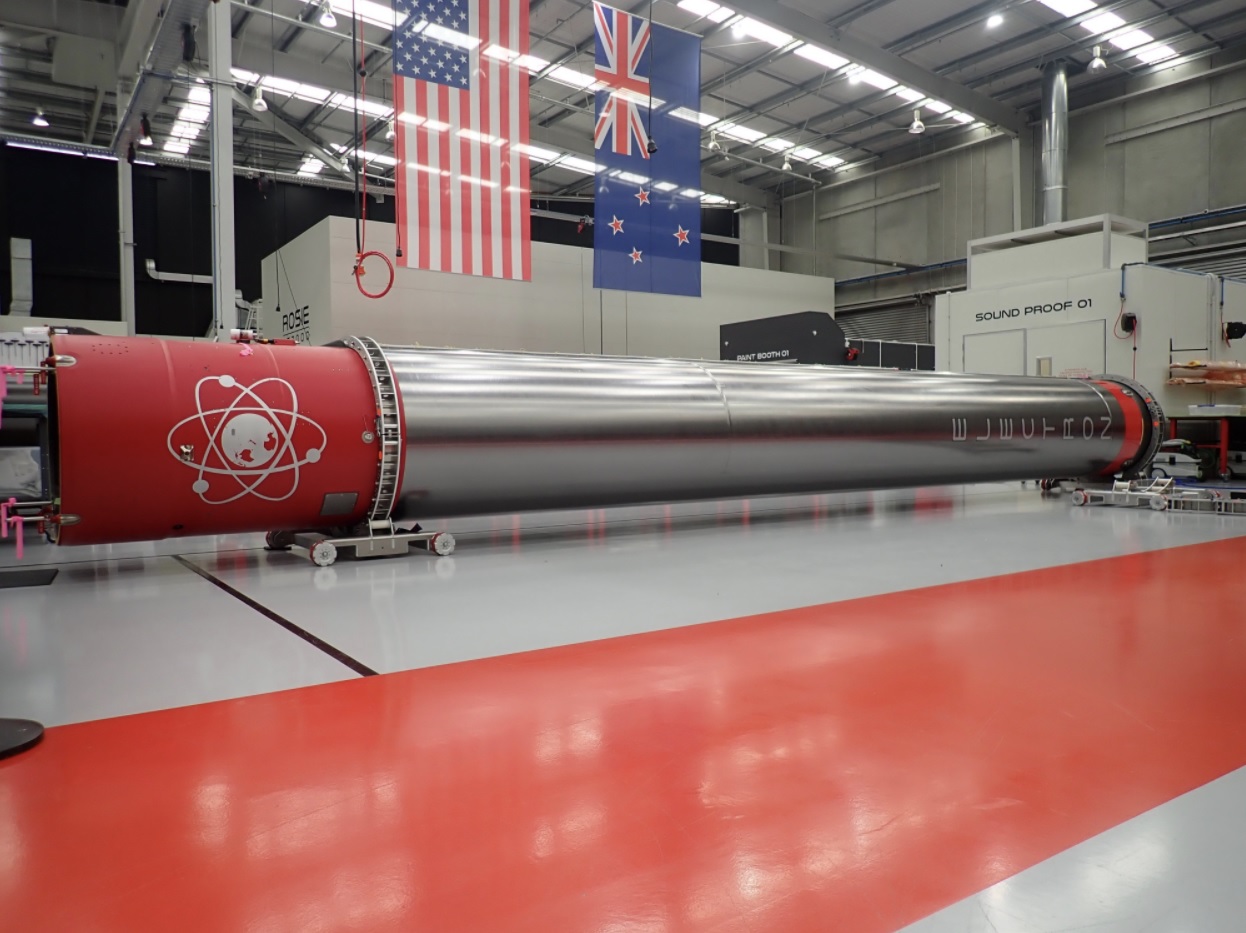 An Electron first stage with the new Thermal Protection System for improved reusability, launching in 2022 – via Rocket Lab

Rocket Lab’s engineers and recovery vessel will still be stationed at sea for the recovery attempt. Electron’s first stage for the launch is already nearing its completion and features a new thermal protection system to protect the entire stage and the nine Rutherford engines from 2,400 degrees Celsius of temperature during re-entry.

The stage also sports modifications to the parachute system, including an engagement line for the recovery helicopter to capture and secure the booster. These upgrades are not in use for the A Data With Destiny mission, but rather for the next recovery attempt next year, which will also continue informing the design of Neutron, Rocket Lab’s reusable medium-lift rocket.

Aside from the usual orbital launches from Rocket Lab, the company is slowly strengthening their offerings of end to end space solutions. Earlier, Rocket Lab acquired Planetary Systems Corporation (PSC), a provider of mechanical separation systems and dispensers for satellites.

PSC’s product offerings will be used onboard the Photon satellites buses and other spacecraft. This is Rocket Lab’s third acquisition, after Advanced Solutions Inc (ASI) in October and Sinclair Interplanetary in April 2020.

We've officially closed the transaction to acquire Planetary Systems Corp! We're excited to join our teams and bring more of what satellite operators need all in one place at Rocket Lab.

Rocket Lab also announced on November 18 that they’ve entered into an exclusive license agreement with the John Hopkins University Applied Physics Laboratory (APL) to commercialize their telemetry and control radio technology. Named “Frontier-S,” it is designed to enable communications and radio navigation for near and deep space small satellites and also for missions in GPS-denied environments, meaning the satellites which are operating outside the GPS availability area.

The company plans to offer this technology as an off-the-shelf radio solution to all satellite integrators.  “Frontier-S radios are another strategic addition to Rocket Lab’s growing space systems portfolio of in-house built products and capabilities, further strengthening our position as an end-to-end space company,” said Founder and CEO of Rocket Lab, Peter Beck.

“Enabling long-distance communication and telemetry in deep space is difficult for any mission, but especially for small satellites where mass and power constraints are a challenge. Frontier-S radios provide a compelling communications solution for interplanetary missions, as well as those closer to home in low Earth orbit.”

“APL has a long history of making critical contributions to NASA and international missions to meet the challenges of space, applying science, engineering, and technology to develop leading spacecraft, instruments, and subsystems,” Beck added. “We are excited to combine APL’s strong history of innovation with Rocket Lab’s proven ability for high-volume manufacturing to deliver an industry-leading communications solution at competitive costs and on reduced timelines.”

Frontier S is based on APL’s Frontier Radio that flew on flagship missions like the Parker Solar Probe, Emirates Mars Mission, and the van Allen Probes. This technology was used on Rocket Lab’s second Photon mission and will be used on the CAPSTONE mission, as well as the Rocket Lab’s private mission to Venus.