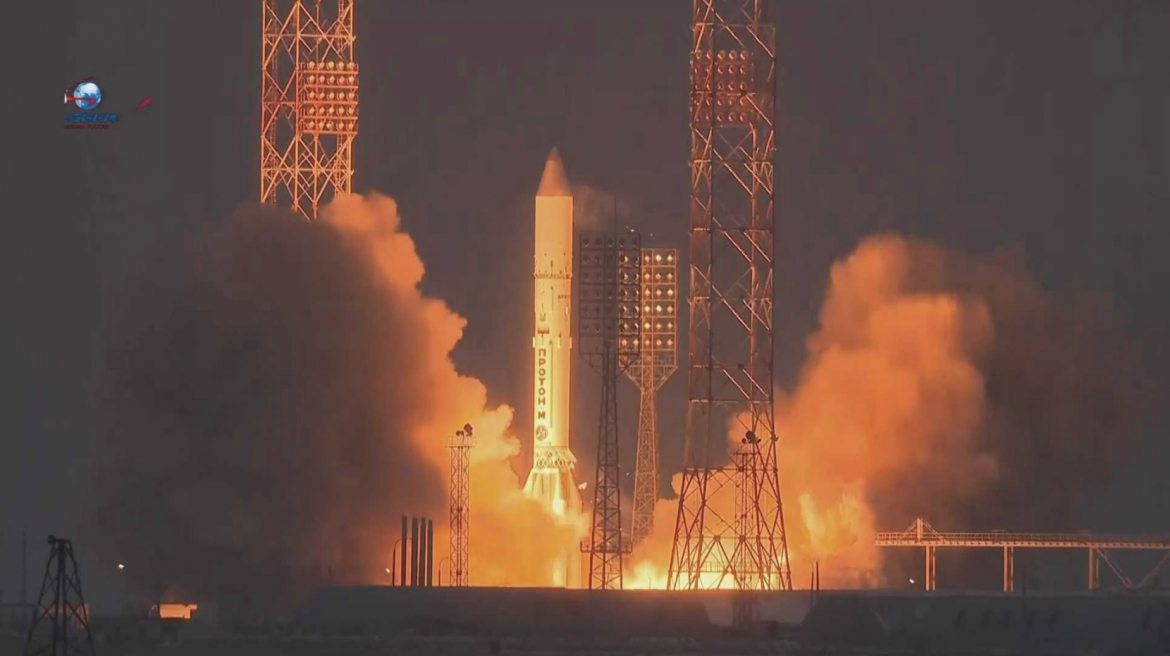 Proton’s payload is made up of Ekspress-AMU3 and AMU7, a pair of communications satellites to be operated by the state-owned Russian Satellite Communications Company (RSCC), also known as the Federal State Unitary Enterprise “Space Communications.”

Both spacecraft were constructed by ISS Reshetnev, based on the Ekspress-1000N platform, and are bound for geostationary orbit. They have a design life of at least 15 years but are carrying enough propellant to extend this to at least 17 years. While both spacecraft share the same construction, each has a different communications payload suited to its particular mission.

At 2,150 kilograms, Ekspress AMU3 is the heavier of the two satellites. It carries 39 transponders; 30 of these operate in the Ku band of the electromagnetic spectrum, seven operate in the C-band, and two in the L band. It is also equipped with C- and Ku-band beacons. The AMU3 satellite will be stationed at longitude 103 degrees East, providing coverage over much of Russia as well as Kazakhstan.

Ekspress AMU7 has a mass of 1,980 kilograms. It also carries 39 transponders; however, only 20 of these are Ku-band, with 18 operating in the C-band and one in the L-band. Only 16 of the C-band transponders are intended for primary operation, with the other two serving as backups, while two C-band beacons and one Ku-band beacon round out the payload.

From its station at 145 degrees East, it will cover Siberia and far-eastern Russia. 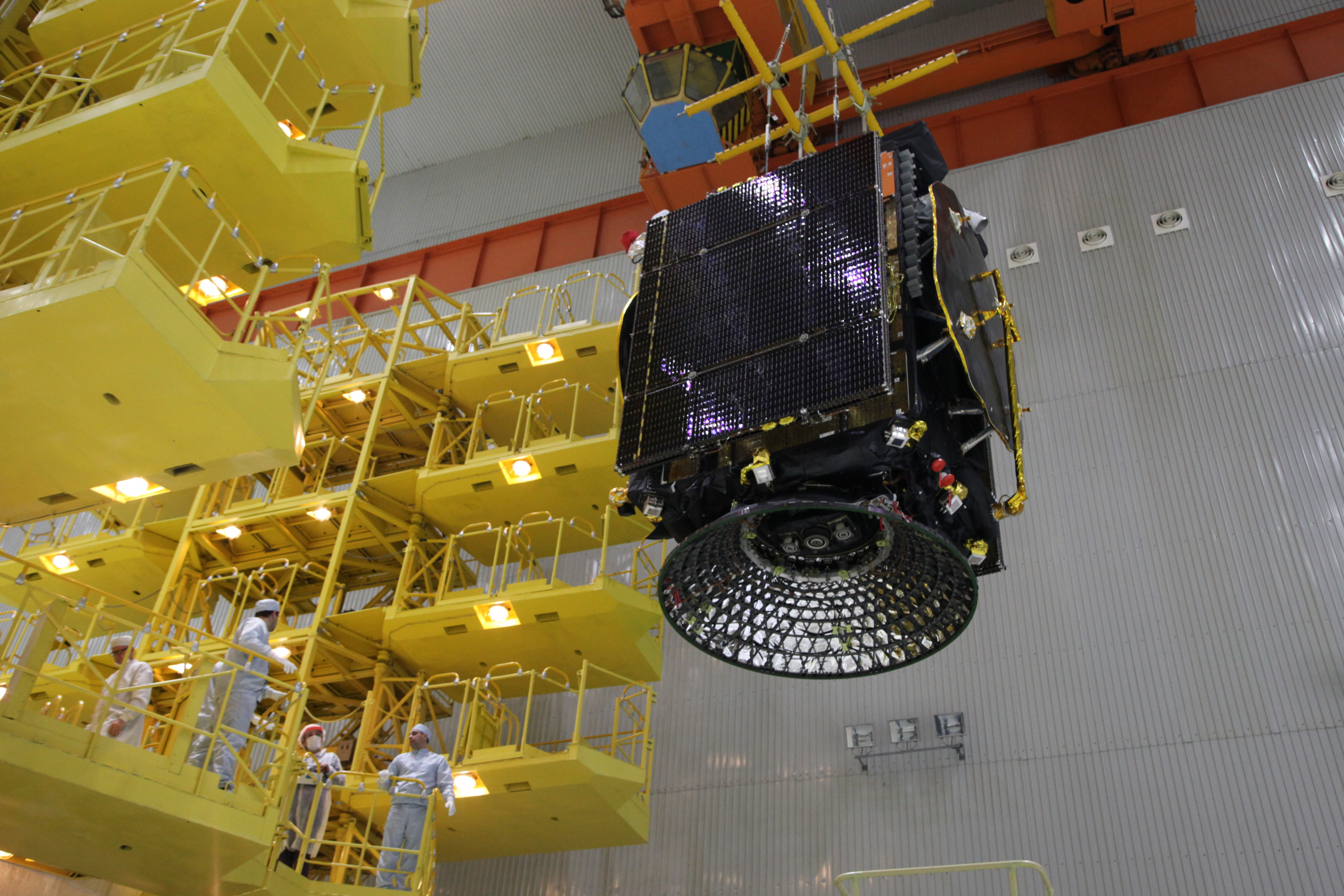 The satellites were stacked inside Proton’s payload fairing, with Ekspress AMU3 in the lower position and AMU7 mounted atop it.

First flown in 1965, Proton is an integral part of Russia’s – and previously the Soviet Union’s – fleet of rockets.

Originally designated UR-500, the rocket that would become Proton was designed by Vladimir Chelomei as part of his Universal Rocket (UR) series. This was intended to give the Soviet Union a range of vehicles with different capabilities – from missiles up to heavy-lift rockets – sharing components and technology across the fleet.

The UR-500 was conceived as an extremely heavy two-stage ballistic missile, capable of delivering the USSR’s largest nuclear weapons to targets around the world. In this role, it never entered service; however, four rockets were used to place heavy N-4 scientific satellites – also known as Proton – into orbit.

With modifications to the second stage and the addition of a third stage, the rocket was optimized for orbital launches and became the Proton-K. The current Proton-M rocket, introduced in 2001, is a modernized version of the Proton-K but stays true to the original design.

While the three-stage Proton vehicle can be used on its own to place heavy spacecraft into low Earth orbit – the most recent Proton launch before Monday’s having used the three-stage configuration to deploy the Nauka module of the International Space Station in July – it most often flies with an additional upper stage for a four-stage configuration which gives it access to higher orbits. 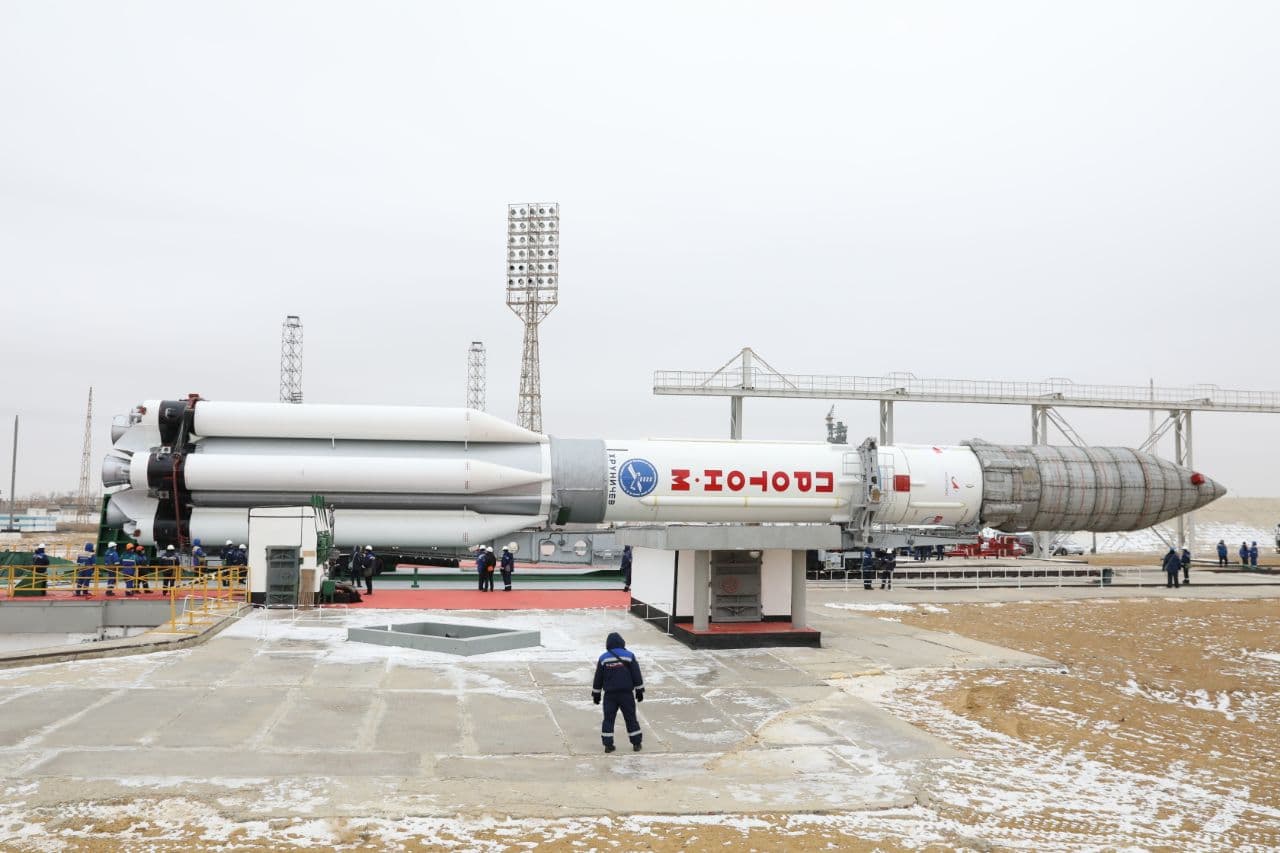 Proton-M shortly after arrival at Pad 200/39 — via Roscosmos

For most of its career, Proton was the only Russian or Soviet rocket capable of taking a meaningful payload to geostationary transfer orbit, and it was a popular choice for commercial communications satellite launches from the mid-1990s until the mid-2010s.

For much of its time in service, Proton was paired with the Blok-D upper stage and its derivatives, such as the Blok-DM series. The Briz-M upper stage, first used in 1999, has largely replaced it, although Proton does still occasionally fly with the latest Blok-DM variant, the DM-03. For Monday’s launch, a Briz-M will be used.

Owing to its heritage in the Soviet missile programs of the 1960s, Proton uses storable unsymmetrical dimethylhydrazine propellant and dinitrogen tetroxide oxidizer in all three of its stages.

This propellant combination ignites on contact, removing the need for complex ignition systems, and allows the rocket to remain fueled for extended periods – a useful quality for a missile that would have to stand watch against unforeseen attacks, but less relevant when it comes to launching satellites.

These propellants are also extremely toxic and harmful to the environment. Due to this, its advancing age, and reliability concerns, Russia is winding down Proton launches in favor of its replacement, Angara.

The Angara is a modular rocket that can be used in a lightweight, single-core configuration to place smaller satellites into low Earth orbit or the heavier Angara-A5 configuration to carry larger payloads or reach higher orbits. It is this latter configuration that is expected to replace Proton. To date, the Angara-A5 has flown twice, with a third test launch expected as early as next week. 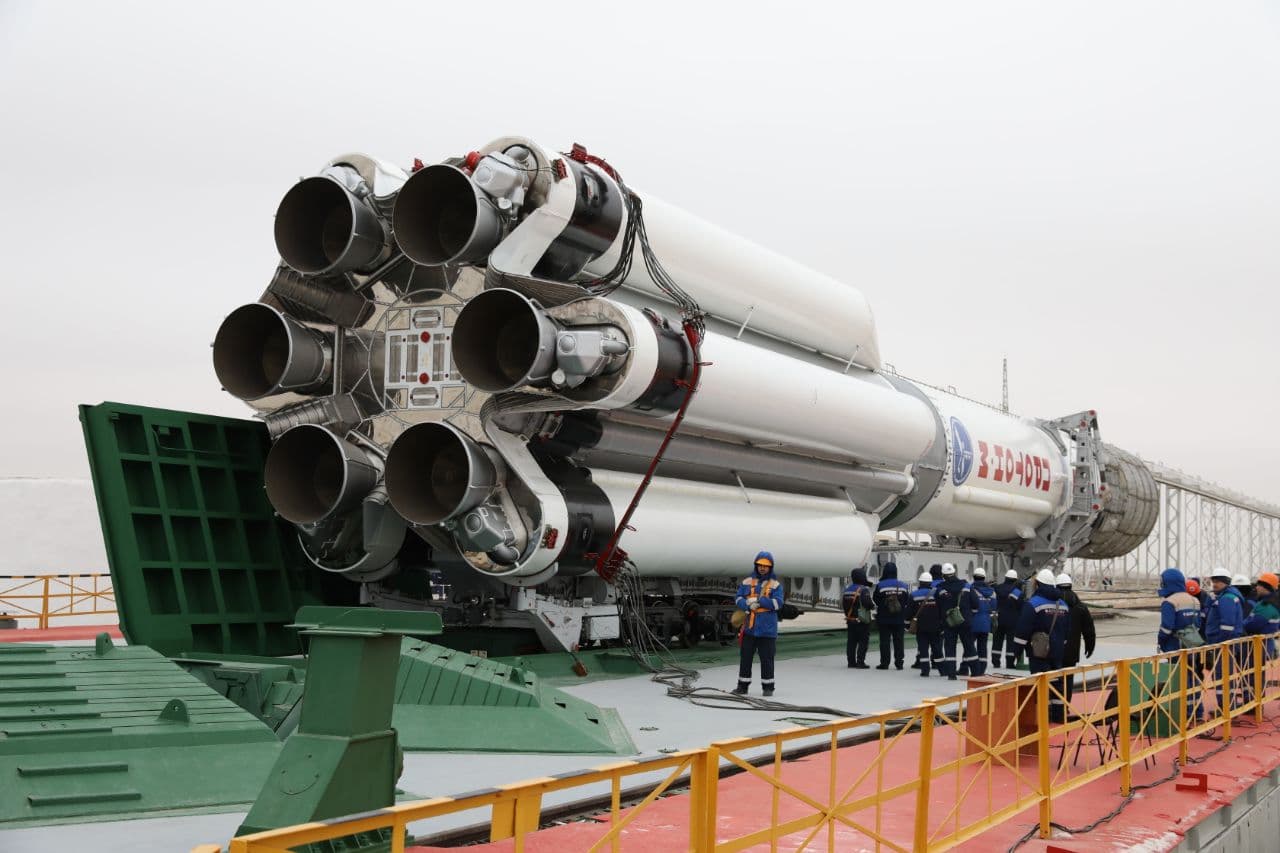 Monday’s launch was from pad 39 at Site 200 of the Baikonur Cosmodrome. Site 200/39 is the last of the four Proton launch pads at Baikonur to remain operational and is expected to be used for all of the rocket’s remaining flights as Russia plans to retire the vehicle by the end of the decade.

Formerly, a second pad – number 40 – was also used at Site 200, alongside another two-pad complex at Site 81. Unlike other rockets such as Soyuz and Tsyklon, Proton has only ever launched from Baikonur.

Like most Russian carrier rockets, integration of the Proton is carried out in the horizontal orientation, using facilities at Site 92. Final assembly took place in assembly building 92A/50 before the rocket was rolled to the fueling area for Briz-M propellant loading.

With this complete, Proton-M was rolled out to the launch pad on Thursday in preparation for a launch which was then scheduled for Sunday.

A few hours after rollout, the rocket was rolled back to the fueling and preparation site after a potential issue was detected with the Briz-M upper stage. Following inspections on Friday, Proton was returned to the launch pad and the new launch window on Monday was announced.

Proton-M’s first stage consists of a central oxidizer tank with six fuel tanks attached radially. It is powered by six RD-276 engines, one mounted at the base of each fuel tank. Igniting in the final seconds of the countdown, these engines power Proton through the early stages of flight as it ascends through the dense lower regions of the Earth’s atmosphere. The first stage burns for just under two minutes before the second stage takes over. 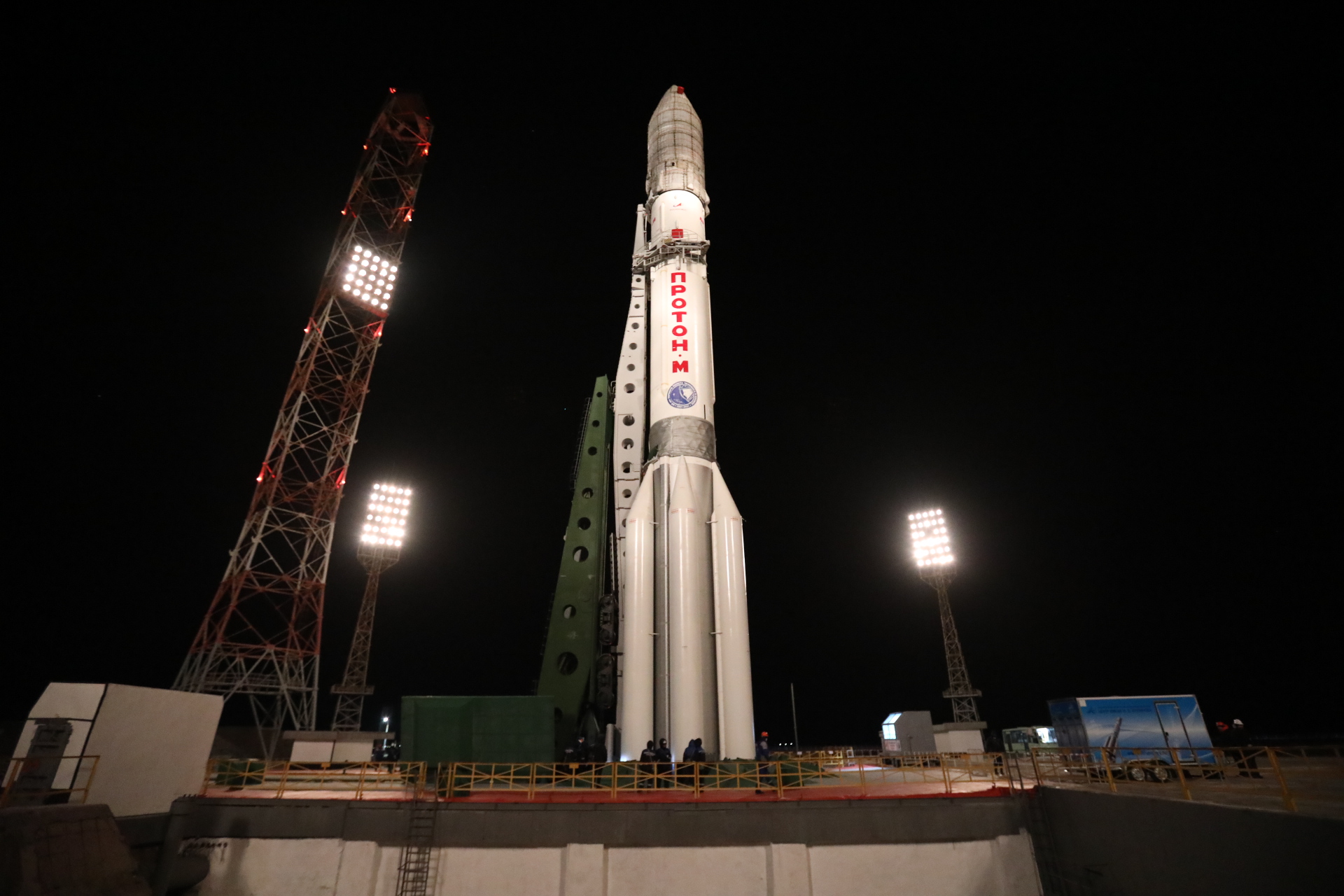 The second stage has four engines: one RD-0211 and three RD-0210s. These are essentially the same engine except that the RD-0211 contains equipment to help maintain pressure in the second stage propellant tanks.

Once the engines are up and burning, the first stage separates and the second continues powering the mission forwards.

Second stage flight lasts about three and a half minutes. At the end of the burn, the second and third stages separate, with the third stage igniting. This stage has an RD-0212 propulsion assembly: the coupling of an RD-0213 main engine with an RD-0214 vernier to provide attitude control.

The RD-0214 has four combustion chambers which are gimbaled to help steer the rocket while the RD-0213 provides the thrust that carries Proton towards orbit. The third stage fires for about four minutes and 15 seconds.

Although on some missions Proton can insert its third stage and payload directly into a parking orbit, on Monday’s launch the third stage did not reach orbit. Instead, it will deliver them to a suborbital trajectory from where Briz-M will take over to complete orbital insertion. The first of five burns using Briz-M’s S5.98 engine set the vehicle up in a parking orbit of 178 by 180 kilometers above Earth sea level.

Briz-M is capable of making multiple burns in the course of a mission, enabling the complex flights needed to launch to equatorial geostationary orbits from Russia’s high-latitude launch sites. The stage consists of a central propulsion module housing the engine, ullage and attitude control thrusters, fuel tanks, and avionics. 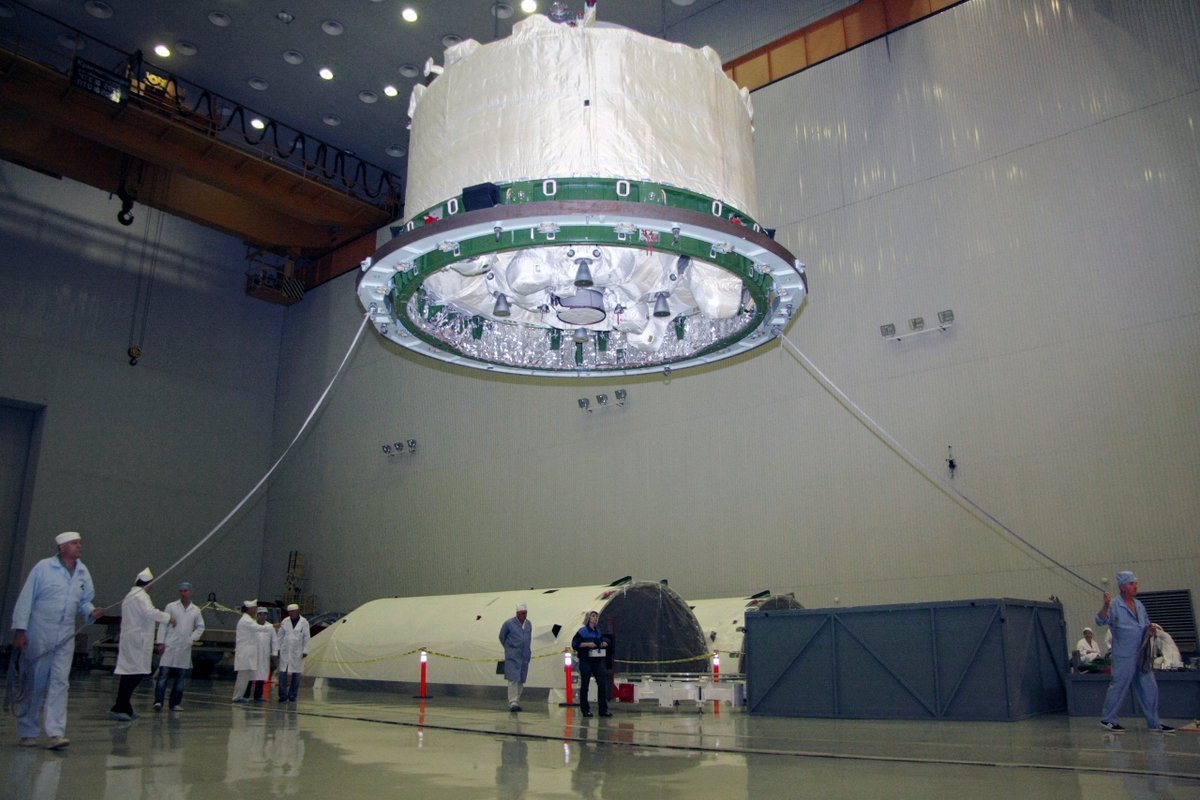 Briz-M being prepared for Monday’s launch — via Roscosmos

Around this is a detachable torus-shaped additional propellant tank. Propellant from this tank is burned first, and it is jettisoned to save mass once its reserves have been depleted.

Briz-M’s second, third, and fourth burns will come as it crosses the equator at the descending node – in a north-to-south direction – on its first three orbits. These will primarily serve to increase the height of the apogee – the highest point of the orbit. The fifth and final burn will occur when Briz-M reaches apogee during its third orbit. This will raise the perigee – or lowest point – of the orbit and reduce its inclination.

Seventeen hours and 50 minutes after lifting off from Baikonur, Briz-M will deploy the Ekspress-AMU7 satellite into an 18,714 by 52,872-kilometre orbit at an inclination of 0.26 degrees to the equator. Ekspress-AMU3 will separate 17 minutes later, with the vehicle expected to be in an 18,692 by 52,872 km orbit at 0.29 degrees when this occurs.

This is a supersynchronous transfer orbit, with an apogee significantly above the satellites’ operational geostationary orbit at 35,786 kilometers, which helps reduce the fuel the satellites will need to burn to reach their final stations compared to a more typical, lower transfer orbit.

Ekspress-AMU7 is expected to be on-station, checked out, and ready to enter service within 56 days of launch, while AMU3 is expected to take up to 59 days to complete its commissioning phase.

Proton’s deployment of the two Ekspress satellites marks the 23rd orbital launch of a Russian rocket in 2021 and the second Proton mission of the year. Russia’s next launch is currently scheduled for December 23 when the Angara-A5 rocket is due to make a test flight from the Plesetsk Cosmodrome.

Focus will then return to Baikonur, where Russia’s final launch of the year is slated to be made by a Soyuz 2.1b on December 27. The next Proton launch is expected in the first quarter of 2022, with the Elektro-L No.4 weather satellite aboard.

(Lead image: Proton-M ahead of the Ekspress launch — via Roscosmos)

Booster 4 returns to the Launch Mount ahead of test campaign