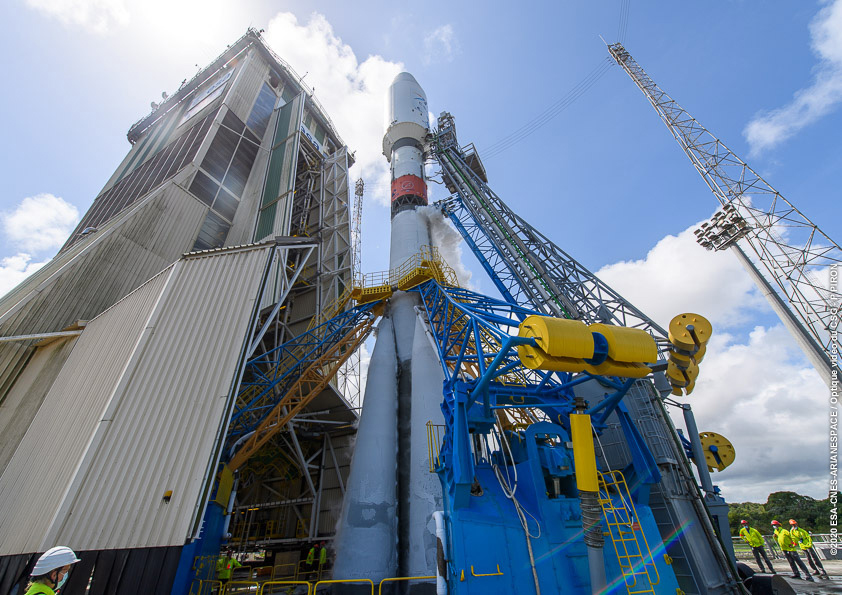 Arianespace has launched another two Galileo FOC (Full Operation Capability) global navigation satellites for Europe. Following a weather delay on Friday, the two satellites were launched by a Soyuz ST-B Fregat on the VS26 mission on Saturday. Liftoff occurred on December 4, 2021, at 21:19 Kourou time (Dec 5, 00:19 UTC; Dec 4, 7:19 pm EST).

The launch of VS26 was the 150th Arianespace mission for European institutions and the 13th mission for Arianespace. This was the first Soyuz launch from the Guiana Space Center in 2021.

LAUNCH! Arianespace Soyuz ST-B launches the VS26 mission with a new batch of Galileo satellites.

The Soyuz first stage is a set of four strap-on boosters surrounding the core stage. The boosters use the RD-107A engine. Each RD-107A engine can produce up to 1,021.2 kN of thrust with a specific impulse of 319 seconds.  The boosters burn for 118 seconds. The four boosters are called the Blok-B, V, G, D.

Blok-A is the core stage, also known as the second stage. Blok-A is a sustainer stage ignited with the boosters on the ground before liftoff and burns for 286 seconds.  It uses the RD-108A engine, which can produce up to 990.2 kN of thrust with a specific impulse of 319 seconds.

The Soyuz-2 has the option to launch with a fourth stage. One of the options is the Fregat kick stage.

Fregat is an optional kick stage made to place its payload into its intended orbit. The Fregat was first used on the Soyuz-U rocket in February 2000. On the Soyuz, it is placed in its payload fairing. Fregat uses the S5.92 hypergolic-based rocket engine. The engine produces 19.85 kN of thrust with a specific impulse of 332 seconds while in a vacuum. While in space, it can reignite several times with a burn time of up to 1,100 seconds.

To launch the Soyuz at the Guiana Space Center, many of the changes were made to the rocket. They included a larger fairing, a flight-termination system, and pyrotechnic engine igniters instead of the normal chemical igniters. The launch site, ELS (Ensemble de Lancement) Soyuz, has a mobile launch tower to allow vertical payload integration.

The Soyuz launch pad at the Vostochny Cosmodrome, located in eastern Russia, also has a mobile service tower, similar to the one in Kourou. This is different from Soyuz pads at both Plesetsk and Baikonur which utilize two launch towers.

Galileo is an ESA (European Space Agency) and EU (European Union) civilian-operated constellation of global position/navigation satellites. The constellation is a set of more than 30 satellites in three different orbital planes.

The first two satellites were used as a test-bed for the new constellation. These satellites were called the GIOVE (Galileo In-Orbit Validation Element)-A and B. The two were launched on a Soyuz-FG Fregat in December 2005 and April 2008 respectively. GIOVE-A and B were successfully able to test the technology for the Galileo constellation. The two were retired in July 2012. In November 2021, GIOVE-A was deactivated.

In October 2011, the first Soyuz-ST launched the Galileo IOV (In-Orbit Validation) FM-1 and 2 satellites. These satellites are similar to the operational Galileo satellites. They were used to validate the constellation while in orbit.

The second set, FM-3 and 4, were launched in October 2012. FM4 suffered a power loss and is not in use today. The other satellites are still in operation.

The first operational version of the Galileo satellites is called the Galileo-FOC. The first two Galileo-FOC satellites were first launched on the VS09 mission. The satellites are currently not being used due to a partial failure of the Soyuz launcher. During the launch, the Fregat placed the satellites into an incorrect orbit.

The Galileo-IOV and FOC satellite are based on the OHB SmartMEO satellite bus. SmartMEO is OHB’s satellite bus offering for operations in Medium Earth Orbit and Low Earth Orbit. SSTL (Surrey Satellite Technology Ltd), provides the Galilieo payload for the satellites bus. The SmartMEO has only been used for the Galileo satellites. At launch, each satellite weighs ~733 kg. 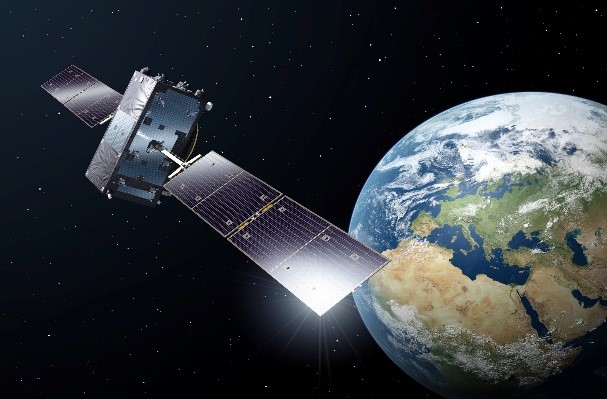 The VS26 mission is the first Galileo-FOC launch since the Ariane 5 VA-244 mission in July 2018. VS26 launched the Galileo-FOC FM23 and FM24 satellites to orbit.

In November 2021, the Soyuz ST-B rocket and the two Galileo-FOC satellites at the Guiana Space Center underwent pre-launch preparations for launch. The two satellites were placed on top of the Fregat upper stage, and both were encapsulated shortly after. The nearly completed Soyuz was rolled out to the pad on November 27. From there, Fregat and the satellites were placed on the Soyuz third stage, completing the rocket for launch.

The launch countdown begins at T-5 hours with the beginning of the meeting for approval for propellant loading. At T-4 hours and 30 minutes, propellant loading begins. Just under three hours later, the rocket is fully fueled. The Mobile Gantry, which surrounds the Soyuz to support and protect the launcher before launch, is then removed at T-1 hour and 10 minutes.

The first umbilical arm is separated just after the move to internal power. The second umbilical arm separates just before engine ignition. At T-16 seconds, the onboard computer commands the boosters and the core stage to ignite. The engines then begin to ramp up to full power, and at T-1 seconds the engines reach full thrust.

At T-0 seconds, the four hold-down arms retract and the Soyuz lifts off. The Soyuz then begins a pitch maneuver to reach an azimuth that will put the rocket in a 57-degree inclination. 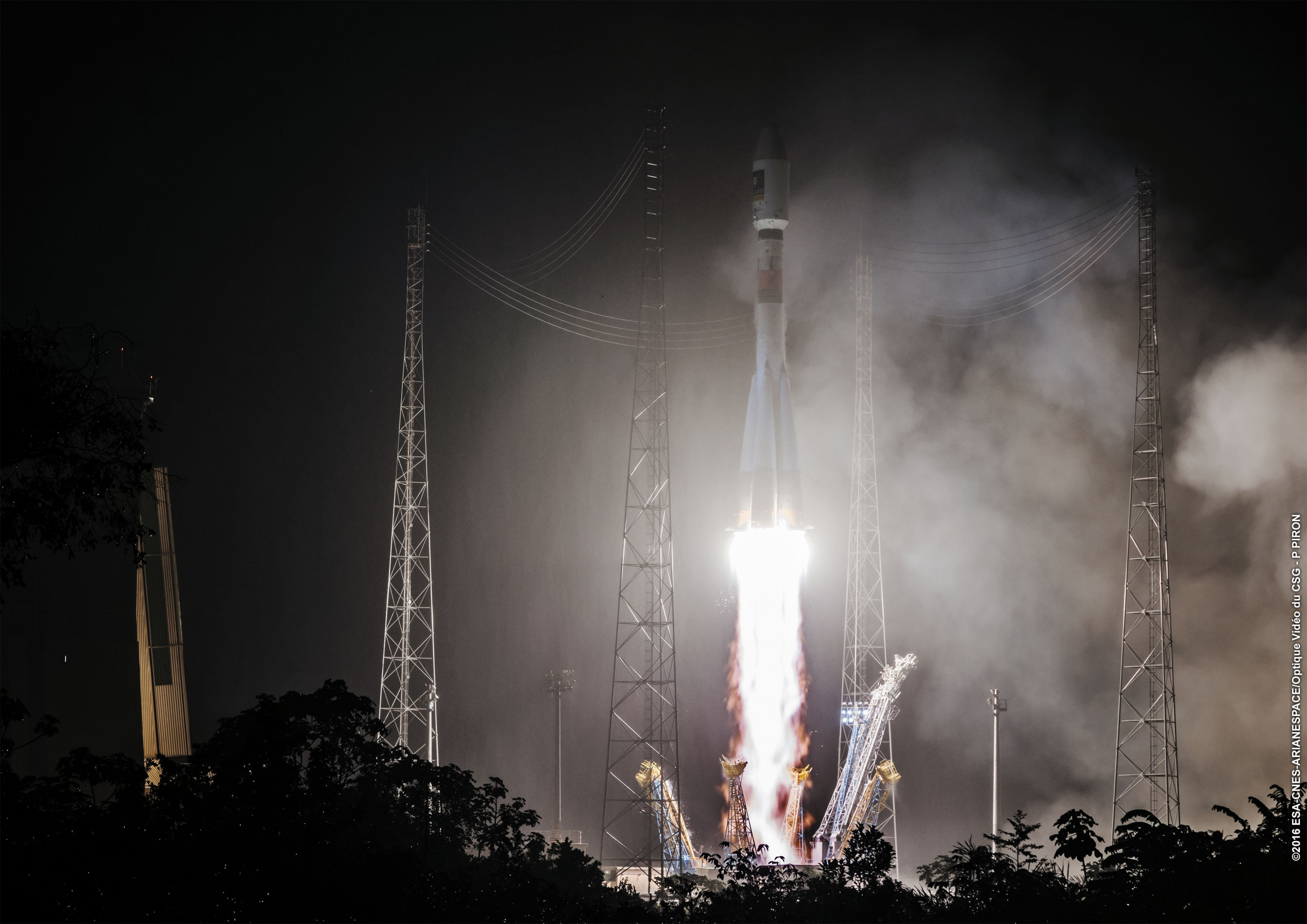 Launch of the Soyuz VS15 mission. (Credit: Arianespace)

Just under a minute later at T+4 minutes and 48 seconds, the third stage ignites and the second stage separates from the rocket. The tail section fairing separates six seconds later.

After burning for nearly five minutes, the third stage shuts down and the Fregat separates. A minute after separation, the Fregat burns to place itself in a Medium-Earth transfer orbit.

Once in orbit, the Fregat coasts until T+3 hours, 42 minutes, and 52 seconds when it begins its second and final burn. This burn lasts for five minutes, placing the Fregat and the two Galileo satellites into its separation orbit. After a short five-minute cost, the Galileo satellites separates in a ~23,529 km circular orbit.

They are joining the 26 satellites already in orbit. The two satellites will then move to the operational orbit of ~23,616 km at ~56 degrees inclination.

Following this launch, Soyuz and Ariane 62 rockets will launch several more Galileo-FOC satellites.  The first generation of satellites is expected to complete its full deployment in 2025/2026.

The second generation of Galileo satellites will be made by Airbus and will launch on an Ariane 62 beginning in 2024.