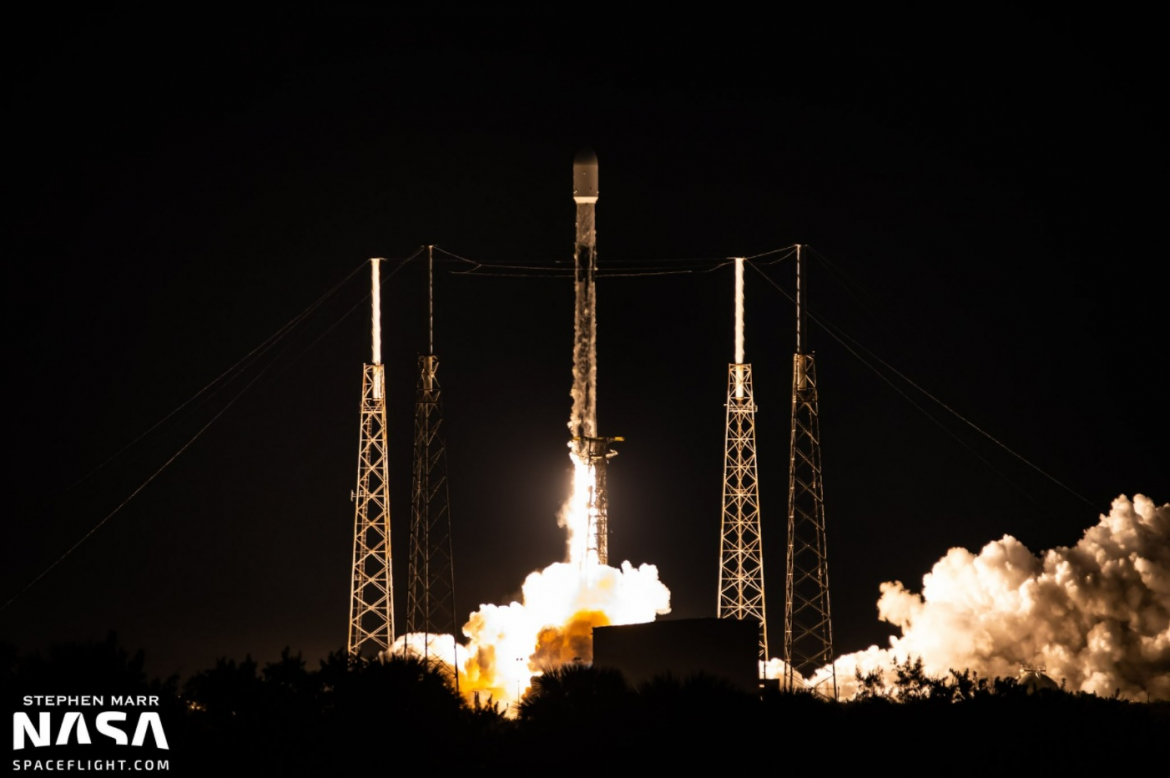 Kicking off a busy end to the company’s 2021 launch campaign, SpaceX successfully launched a group of Starlink satellites from Florida on Thursday evening. The Group 4-3 mission, carrying 48 Starlink satellites and two rideshare payloads to low Earth orbit, lifted off from SLC-40 at the Cape Canaveral Space Force Station at 6:12 PM EST (23:12 UTC).

The Falcon 9 first stage tasked with the launch was B1060-9. After flying northeast from Cape Canaveral and separating from the second stage, the booster made a landing on one of SpaceX’s autonomous spaceport drone ships, A Shortfall of Gravitas. The second stage powered the stack of Starlink satellites, plus a pair of Earth observation satellites for BlackSky Global, toward payload separation into a 53.2-degree inclination orbit and an altitude of approximately 430 kilometers.

The Starlink Group 4-3 flight is the first of at least four planned SpaceX launches for the month of December. A few miles north of pad 40, and following a United Launch Alliance Atlas V launch on December 5, another Falcon 9 is slated to launch NASA’s Imaging X-ray Polarimetry Explorer (IXPE) no earlier than December 9 from LC-39A. This is to be followed by a Turksat-5B communications satellite as early as December 18 back at SLC-40.

Then, only about 54 hours after Turksat, another Falcon 9 is slated to launch from 39A, this time with the CRS-24 Cargo Dragon spacecraft carrying supplies to the International Space Station. While these four launches alone make for a very busy month, it’s not impossible that an additional Starlink launch could occur before the year is out from either Florida or Vandenberg Space Force Base in California.

Before this especially active finale to the 2021 launch year can occur, Starlink Group 4-3 had to successfully get off the ground. The Falcon 9 stack, including both stages and the satellites enclosed within the payload fairing, rolled out to SLC-40 on Monday. On Wednesday evening at 6:30 PM EST, a successful static fire test of the rocket’s first stage was completed.

Standing by for @SpaceX to confirm static fire of Falcon 9 ahead of a potential Starlink 4-3 mission NET 12/2. Static fire occured at 18:30 EST from Launch Complex 40. pic.twitter.com/U1fwXntaC6

Meanwhile, the vessels tasked with recovering Falcon 9’s reusable components made their way to their respective landing zones. A Shortfall of Gravitas, towed by Finn Falgout, departed Port Canaveral on November 27. The drone ship was stationed approximately 639 kilometers downrange, northeast of Cape Canaveral.

Following a successful launch, booster B1060-9 successfully landed on A Shortfall of Gravitas for reuse on future missions. The booster debuted on the GPS-III-SV03 mission in June 2020, the first of nine flights prior to Starlink 4-3. B1060 supported the Turksat-5A and Transporter-2 missions, as well as five previous Starlink missions.

The drone ship was supported by the multi-purpose vessel named Bob, which departed Port Canaveral on Monday. Bob is also be tasked with the post-splashdown recovery of both payload fairing halves.

The payloads onboard include 48 Starlink satellites, which join the over one thousand spacecraft already deployed for SpaceX’s satellite internet constellation. The Group 4-3 mission is the third Starlink flight in support of new “shells” of satellites, after the first such shell’s launches were completed in May. The Group 2-1 mission from Vandenberg, California in September and the Group 4-1 mission from Florida in November were the first two missions with these new, upgraded, satellites, which also occupy different orbits than the first shell.

The Group 4-3 satellites were deployed into low Earth orbit inclined 53.2 degrees to the equator and an altitude of 430 kilometers. This is a higher injection orbit than usual, as most Starlink missions deploy into lower orbits in order to enable faster reentry of malfunctioning satellites and the tension rod debris objects from the payload stack’s deployment mechanism. Following stage separation, a pair of upper stage burns placed the payloads into orbit. 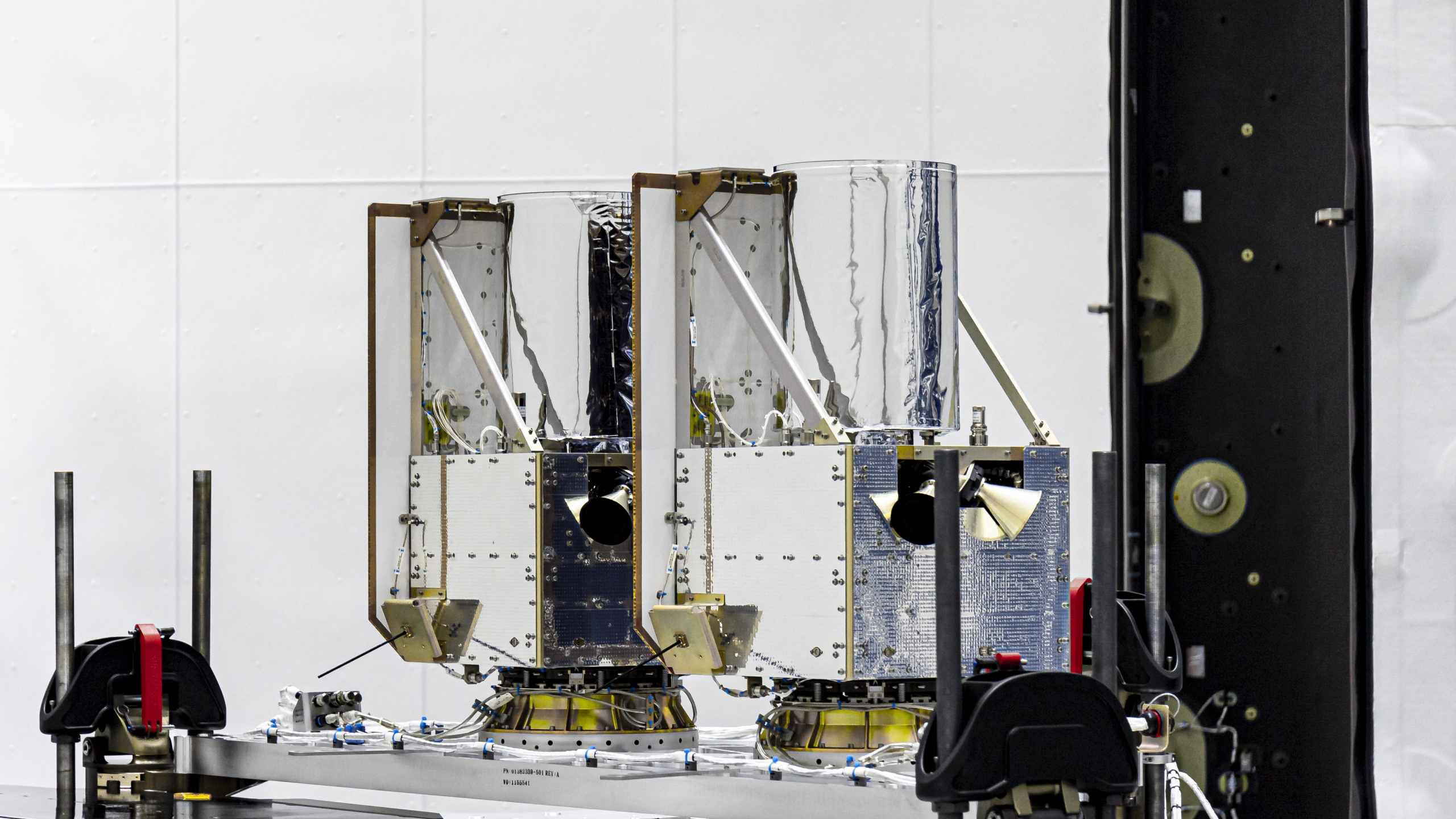 A pair of BlackSky Global satellites are prepared for integration on the Starlink v1.0 L9 mission in August 2020. The satellites on the Group 4-3 mission will be similarly integrated. – via Spaceflight Inc.

Joining the Starlink stack on this flight were a pair of BlackSky Global satellites, as part of a rideshare mission designated SXRS-2 and managed by Spaceflight, Inc. The BlackSky satellites were mounted on top of the stack of Starlink spacecraft and deployed prior to separation of SpaceX’s satellites at T+ 63 and 66 minutes, respectively. Deployment of the 48 Starlink satellites occurred an hour and a half after launch.

BlackSky previously launched a pair of satellites on the Starlink v1.0 L9 mission in August 2020 in a very similar manner. The Earth observation constellation has utilized multiple rideshare launch opportunities, including an Indian PSLV launch in November 2018, the Spaceflight, Inc. SSO-A mission on Falcon 9 in December 2018, and Rocket Lab Electron launches in June 2019, August 2019, and March 2021.

BlackSky has also launched spacecraft on dedicated Rocket Lab launches. The first such launch in May 2021 failed due to a second stage failure, but the second in November successfully launched two BlackSky Global satellites to orbit. Another dedicated launch for BlackSky by Rocket Lab is scheduled for this month, to be followed by another in 2022.

(Lead photo: Falcon 9 lifts off from SLC-40 – via Stephen Marr for NSF)