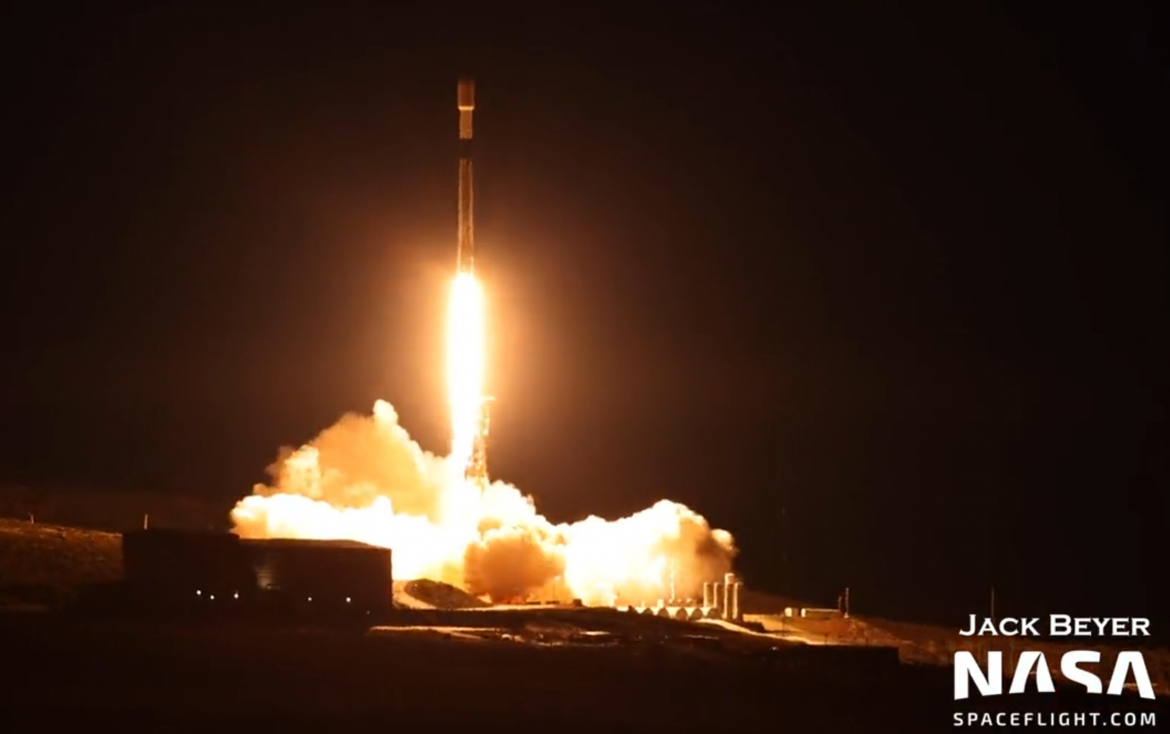 The mission lifted off from SLC-4E (Space Launch Complex 4 East) at Vandenberg Space Force Base in California. But despite launching from the west coast, the mission targeted the 53.2° shell – SpaceX’s first launch to a non-polar orbit from Vandenberg.

The Starlink Group X-Y nomenclature was introduced after SpaceX completed their first Starlink shell, where the X represents the shell number (1-5) and the Y represents the mission number to that shell.

Like previous Starlink missions and many Space Shuttle missions, the mission number does not represent the chronological launch order; in this case, Starlink Group 4-4 is launching ahead of Starlink Group 4-2, making this launch the third to the fourth shell.

Starlink phase one is split into five different orbital shells:

Starlink shell 4 is composed entirely of Starlink v1.5 satellites, which, unlike the v1.0 satellites in shell 1, feature inter-satellite laser communication that allows the satellites to communicate directly with each other and removes the need for ground stations over areas such as the poles.

These satellite upgrades have increased the mass of each satellite, which is one of the reasons why only 52 are being launched on this mission as opposed to 60 satellites on most Starlink v1.0 missions.

The dogleg maneuver the second stage performed to get into the proper orbit further reduces the performance of the Falcon 9 and therefore the number of satellites that can be taken to this orbit from Vandenberg.

The Falcon 9 first stage supporting this mission is B1051-11, which marks the first 11th flight of a Falcon 9 booster. This surpasses the goal laid out by SpaceX CEO Elon Musk that a Falcon 9 Block 5 would be capable of 10 flights without major refurbishment and then continue to fly beyond that.

B1051 first flew on Dragon 2’s first mission to orbit, SpX DM-1 (SpaceX Demonstration Mission 1), and has since flew 10 times prior to Saturday:

At approximately T-2.8 seconds, the Falcon 9 commanded the ignition of its nine Merlin 1D engines. The engines ignite in pairs, with approximately 100 ms between each pair’s ignition, to reduce loads on the vehicle during startup.

Once the Falcon 9 detected that all engines are running nominally, the vehicle commanded the hydraulic clamps at the base of the vehicle to release, letting the vehicle lift off from the pad at T-0.

One of my remote captures from the DART mission at Vandy last night. @NASASpaceflight pic.twitter.com/QjgGMZqsNN

The first stage burned for two and a half minutes before shutting down its engines, again in staggered pairs to reduce loads on the vehicle. Falcon 9 then commanded stage separation, which is done by four pneumatic separators stored on the interstage, before igniting the second stage.

At this point, the second stage performed a slight dogleg, hugging the coast of Mexico so it aligns with the correct azimuth to achieve the correct inclination of the target orbit.

Meanwhile, after conducting an entry and landing burn, the first stage touched down on SpaceX’s ASDS (Autonomous Spaceport Drone Ship) Of Course I Still Love You stationed 638 km downrange. Once B1051 successfully landed, its designation changed to B1051-12. 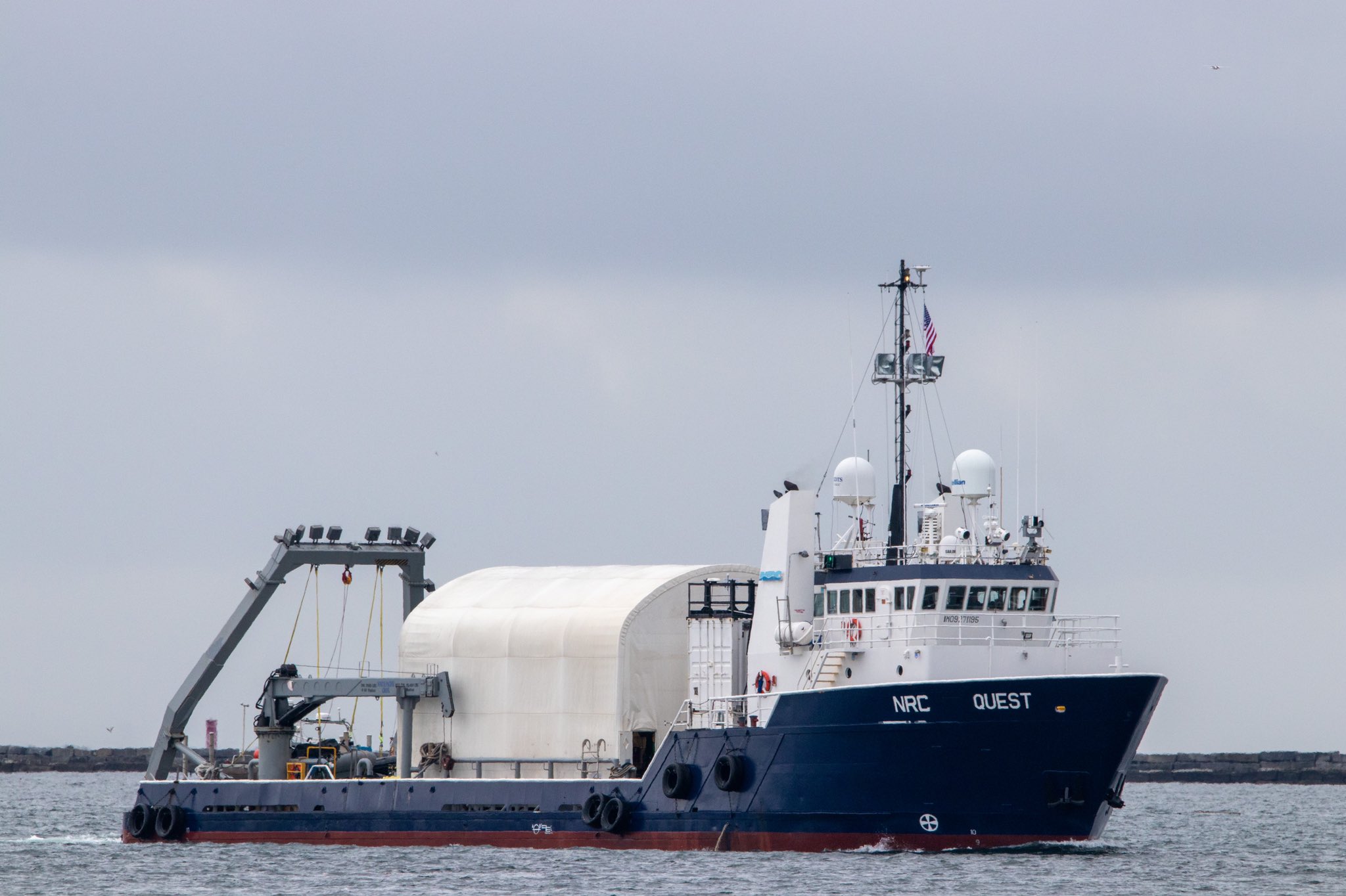 NRC Quest returns to the Port of LA with the final SpaceX Dragon 1 cargo vehicle onboard. (Credit: Jack Beyer for NSF)

On Starlink Group 4-4, the second stage performed a single insertion burn; after shutdown, the stage begins spinning about Falcon 9’s x-axis. 15 minutes and 45 seconds after launch, the tension rods deploy from the Starlink stack, allowing the satellites to float away.

Shortly thereafter, SpaceX performs a deorbit burn of the second stage, followed by the usual propulsive passivation: SpaceX vents the tanks to remove as much excess fuel/oxidizer as possible to allow the second stage to reenter safely and not risk a RUD in orbit, which would create space debris.

Following this mission, SpaceX has two more launches planned for 2021.  The Türksat 5B communications satellite mission to GTO (Geostationary Transfer Orbit) is scheduled for December 18 at 10:58 PM EST (03:58 UTC on December 19) from Space Launch Complex 40 at the Cape Canaveral Space Force Station in Florida.

This will be followed less than three days later on December 21 at 05:06 AM EST (10:06 UTC) by the launch of the CRS-24 cargo resupply mission to the ISS (International Space Station).

Assuming these launches go as planned, SpaceX will have launched 31 missions in 2021.