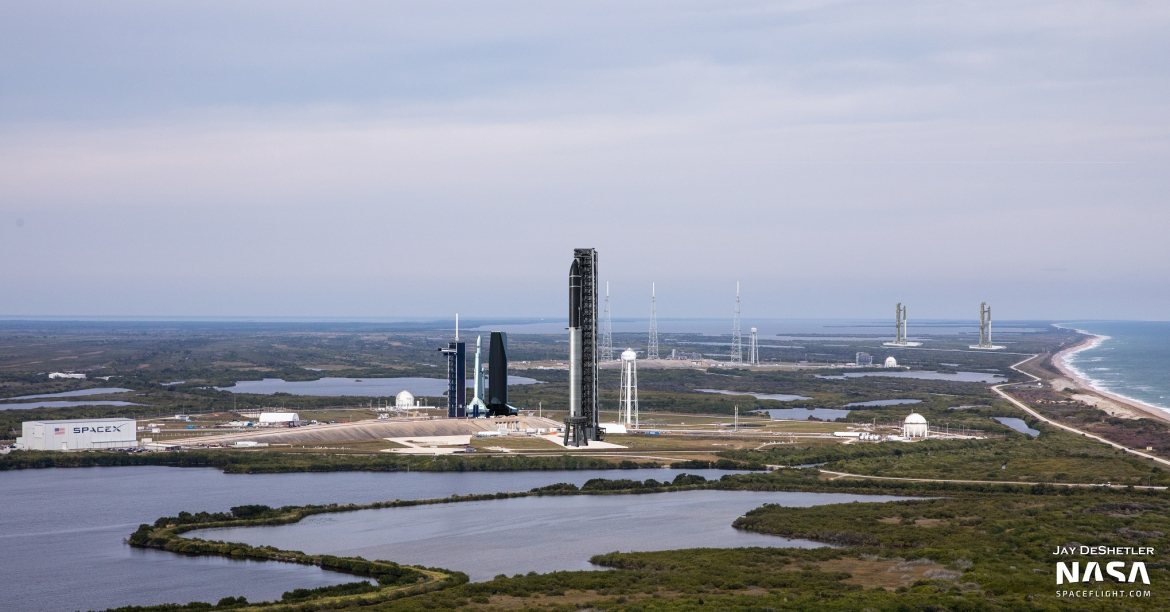 The prospect of Starship making its mark on the Space Coast entered another level this week when NASA revealed it would conduct environmental assessments on LC-49 to support Starship launch and landing operations.

With SpaceX already confirming they will restart work on a Starship pad inside 39A, the potential of a second site at LC-49 could provide a considerable increase in Starship launch cadence from the Kennedy Space Center (KSC).

SpaceX has always held ambitions of launching from KSC, with 39A cited as the launch pad during the initial reveal video for its next-generation launch system.

Although work paused on the Starship launch site inside 39A, this was deemed to be temporary as the focus was switched to the accelerated development of SpaceX’s Starbase Production and Launch Site in Boca Chica, Texas.

Then, over the Thanksgiving holiday, the initial structure of the 39A Starship mount was demolished, allowing for a clean-slate approach to building a mount more akin to that built at Starbase.

In revealing that 39A Starbase pad construction had restarted, Elon Musk added his affinity with 39A, which has a rich history ranging from the Apollo missions to the Moon through the 30-year career of the Space Shuttle.

39A is hallowed spaceflight ground – no place more deserving of a Starship launch pad!

Will have similar, but improved, ground systems & tower to Starbase.

SpaceX’s lease of 39A was in cooperation with Space Florida, which has a hand in most of the commercialization of the NASA spaceport. This multi-use facility ambition has been a significant element of KSC’s future in the post-Shuttle era and entirely in the knowledge that SLS – from 39B – won’t be launching more than once a year.

However, attempts to attract commercial vehicles to the famous spaceport, part of KSC’s Master Plan mandate, have struggled.

Notable losses include OmegA, which was set to launch from 39B before the vehicle was canceled. Rocket Lab’s Electron was a prime candidate to launch from a small launch site inside the perimeter of 39B, confusingly named 39C, before the option of launching from Wallops proved to be more attractive.

Back in the early 1960s, KSC was initially set to include far more pads than just the iconic 39A and 39B. 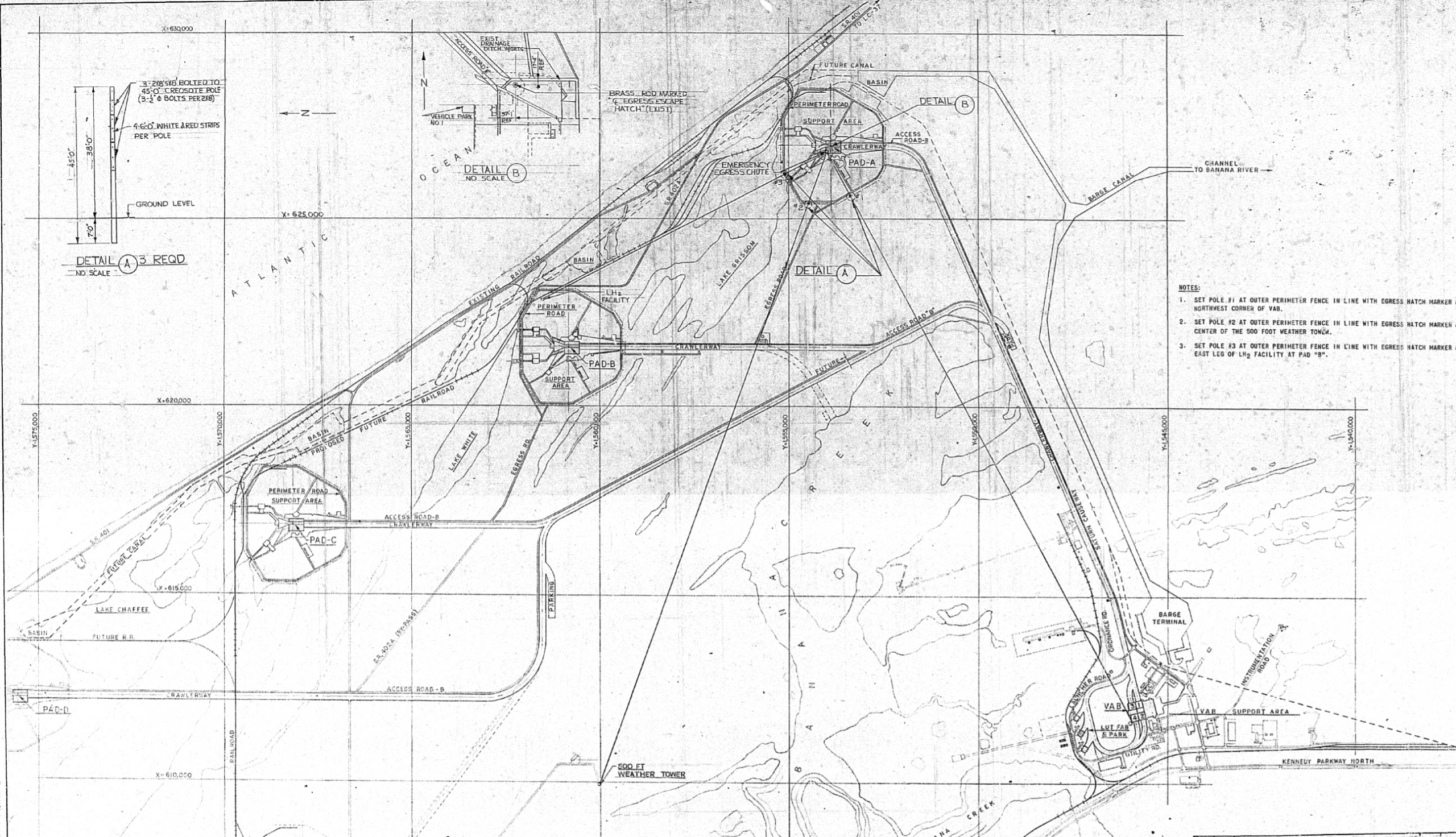 The original 39A, B, and C plans via L2 Historical scan.

Later, the notional Pads 39C and 39D were allocated to the never-built nuclear Saturn vehicle that would have supported the Mars expedition missions as a follow-on to the Apollo program.

However, that highly ambitious and costly program was canceled, as NASA opted to transition to the Space Shuttle Program. 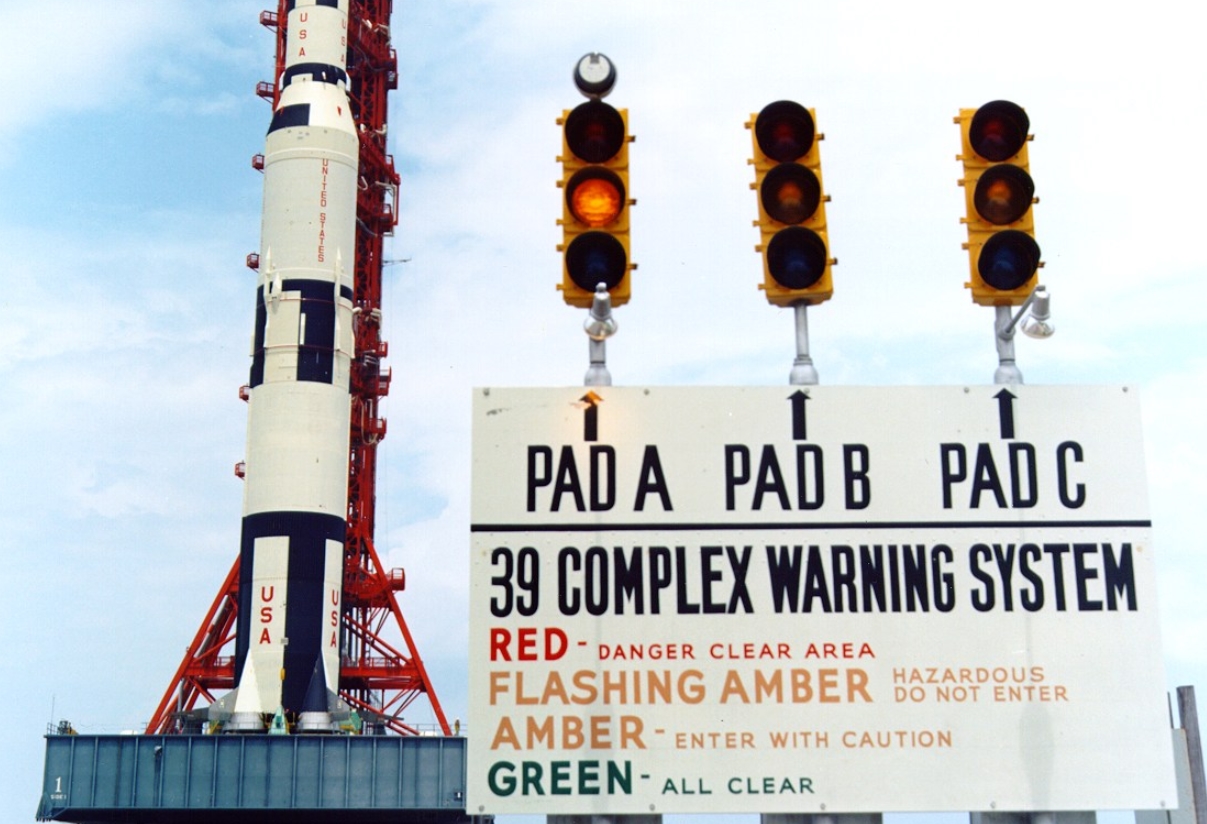 The KSC warning lights showing the plan was to expand past 39A and B. Via NASA

Earlier plans in 1963 showed the potential for five pads, with 39A becoming 39C, 39B remaining where it is today, followed up the coastline by newly allocated 39A – which then formed the bottom right corner of an equidistant triangle made up of 39D and 39E.

The addition of LC-49 would be in a location north of the envisioned 39C pad from the 1960s plan but still within KSC’s Operational Buffer zone.

This area, which was previously included in the KSC Master Plan as a placeholder, will now undergo environmental assessments to develop a proposed new launch site “in response to an inquiry from SpaceX.” 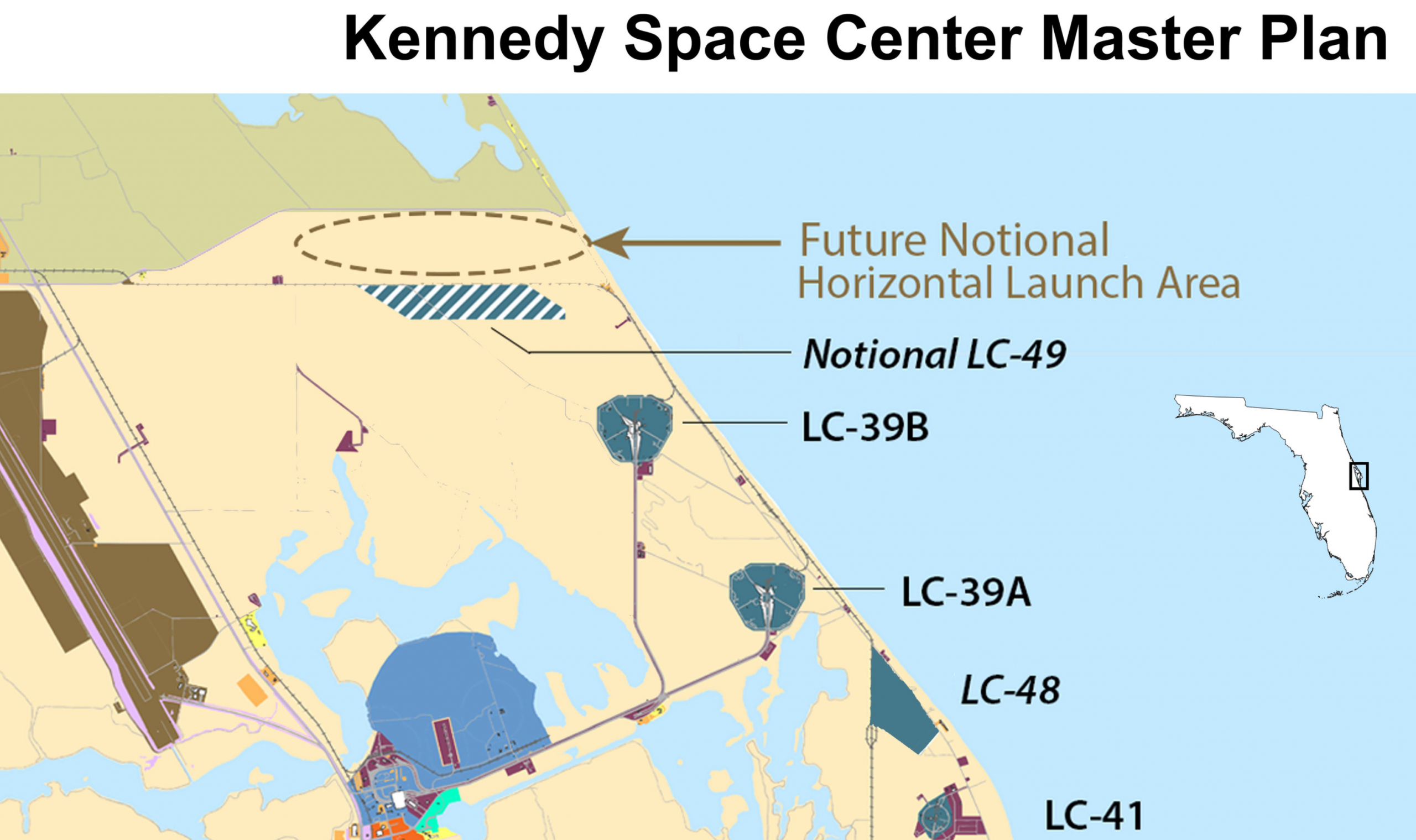 The location of LC-49 in the KSC Master Plan, via NASA.

NASA noted that the Agency and SpaceX are moving forward with the initial environmental analysis before concluding a potential agreement to develop the property.

“LC-49 has been a part of Kennedy’s master plan for several years,” said Tom Engler, Kennedy’s director of Center Planning and Development. “The Notice of Availability was updated in 2014.”

Such a process is likely to take some time, given all development activities on Kennedy are subject to the National Environmental Policy Act (NEPA). 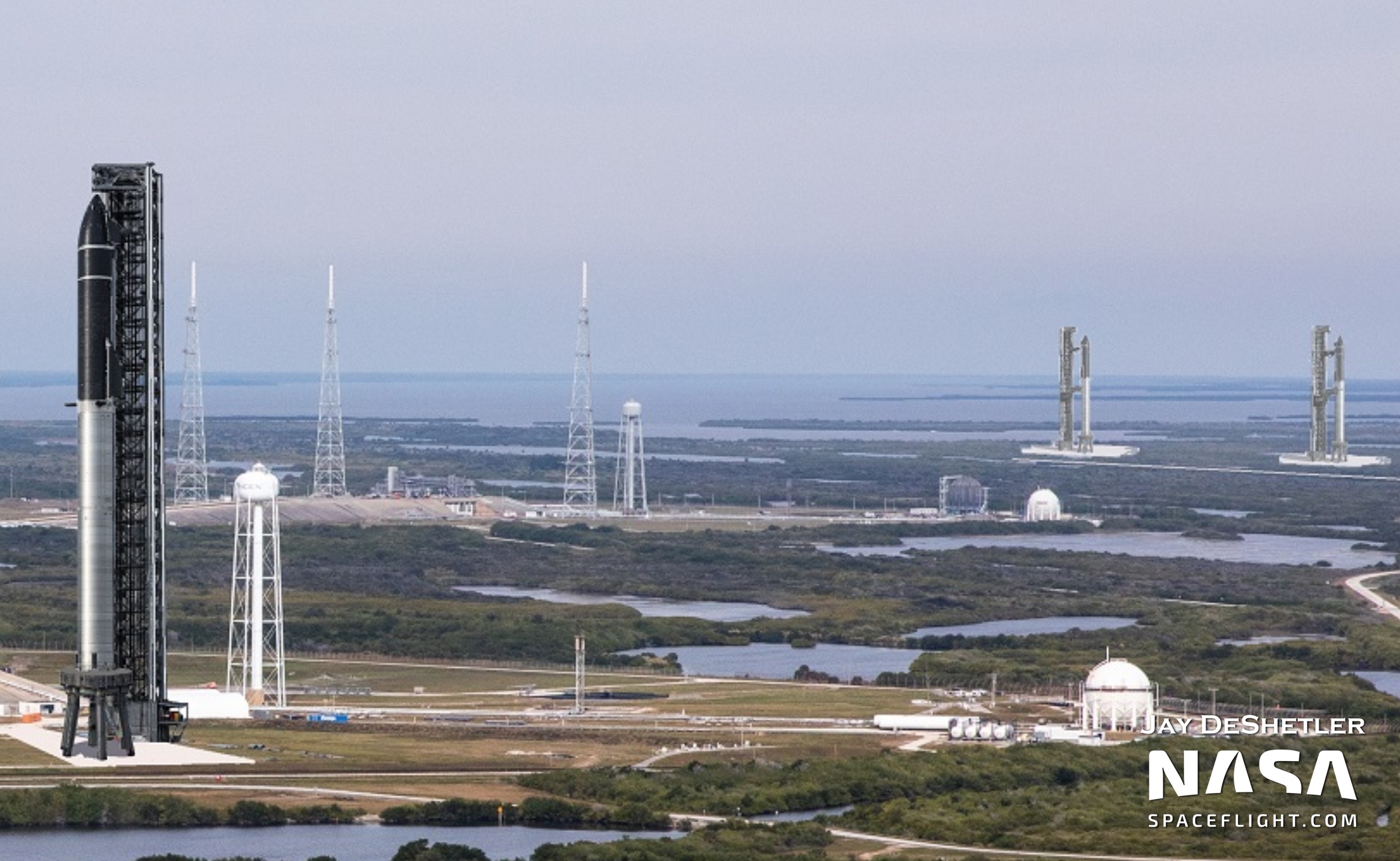 Envisioning of LC-49 from 39A via Jay DeShelter for NSF L2.

First, NASA will begin inter-agency and public scoping for the proposed LC-49 Environmental Assessment in early 2022. The agency will then seek input from other agencies, organizations, and the public on potentially affected resources, environmental issues, and the agency’s planned approach to analysis.

“Every new construction project, whether government or commercial, goes through a comprehensive environmental review process,” added Don Dankert, technical lead for the Kennedy Environmental Planning Office. “This ensures that we are able to identify potential environmental impacts and define any associated mitigations prior to project implementation.”

Starting the process now could work out as part of SpaceX’s own internal master plan, with Starbase being the initial launch site, set to involve two Launch Towers. 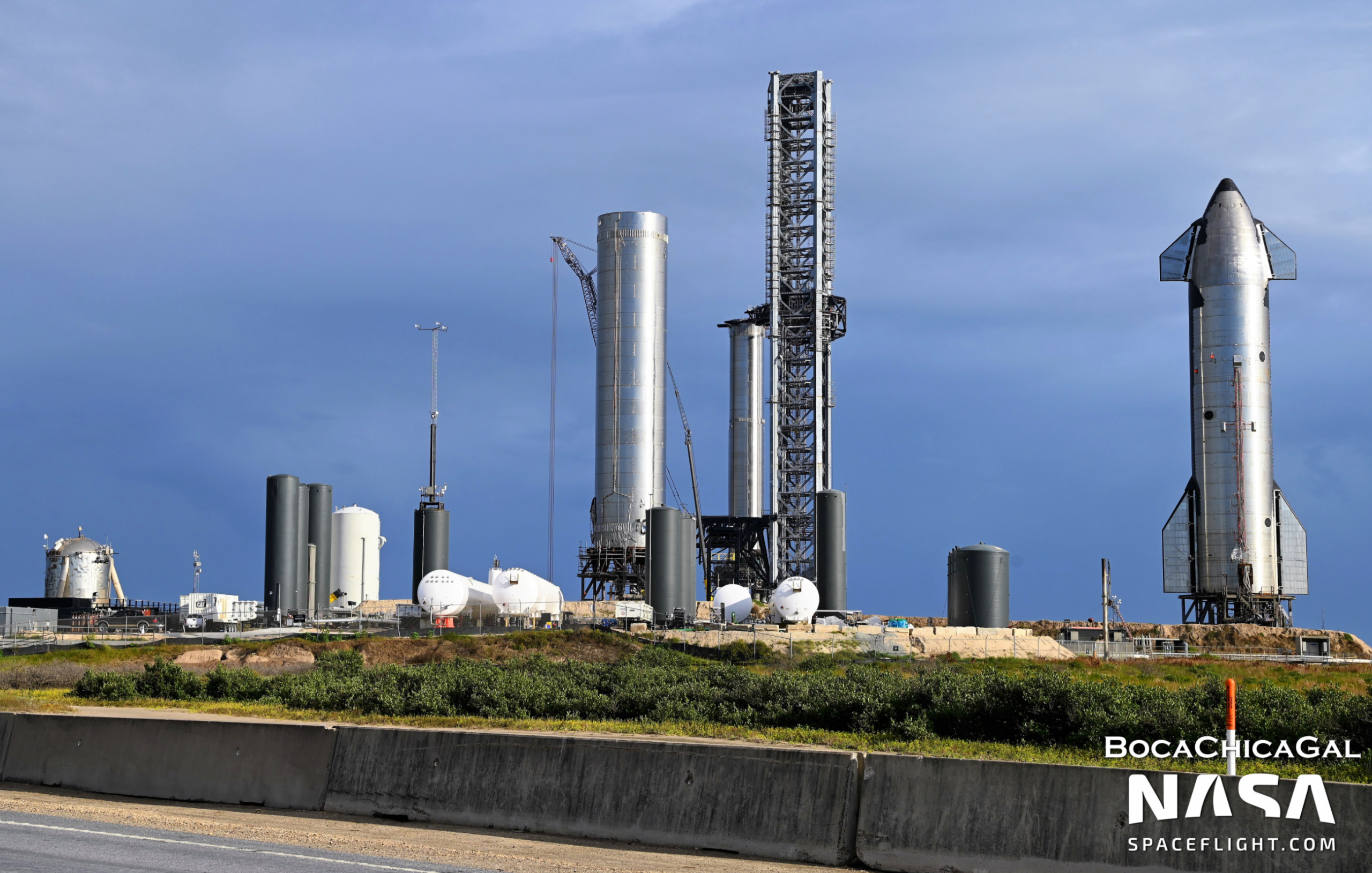 Adding to 39A’s capability to host Starships, the potential use of two ocean platforms – Phobos and Deimos – and then LC-49, SpaceX would be into a launch infrastructure scenario that would support the ambitious cadence that has been portrayed by Elon Musk as required for creating a city on Mars.

The potential of more launch sites – such as on the West Coast – is not out of the question.

Such a master plan would require confirmation from Musk, who is due to provide a Starship update presentation in the near term.

The update could also include more details on Starship 39A, including where the massive rockets will be hosted ahead of being installed on the launch mount.

Likely, SpaceX has also inquired about the spare High Bay inside the cavernous Vehicle Assembly Building (VAB), which numerous sources say is an active conversation. 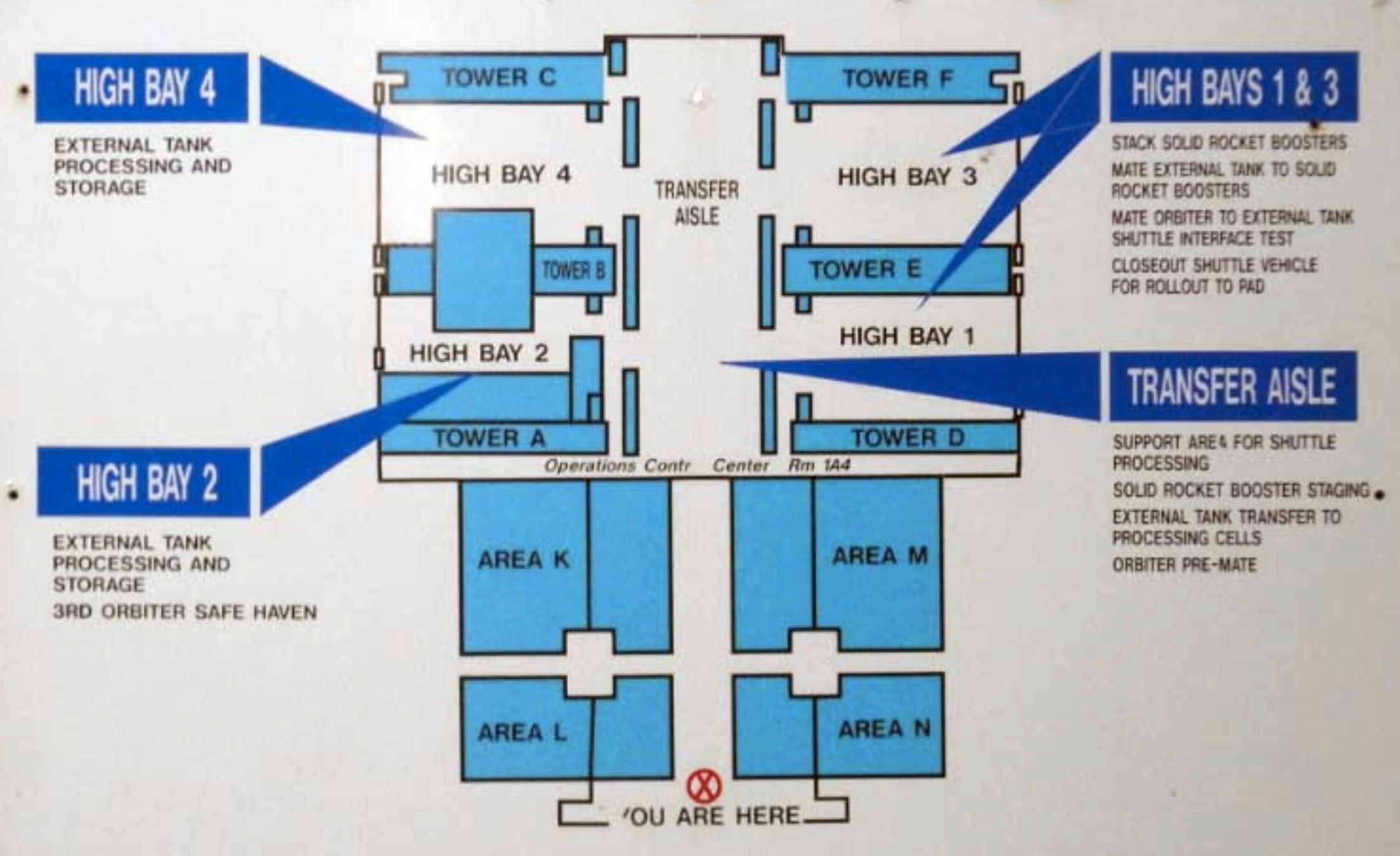 The VAB High Bays via NASA

Such a conversation would be specific to High Bay 2. SLS uses High Bay 3, while High Bay 1 is reserved for future SLS use. High Bay 4 is used for storage and preprocessing of SLS components before stacking.

SpaceX would have space to process Boosters and Starships inside the High Bay. However, the actual stacking of the two vehicles would still likely involve a Starbase Mechazilla-style system on the launch tower.