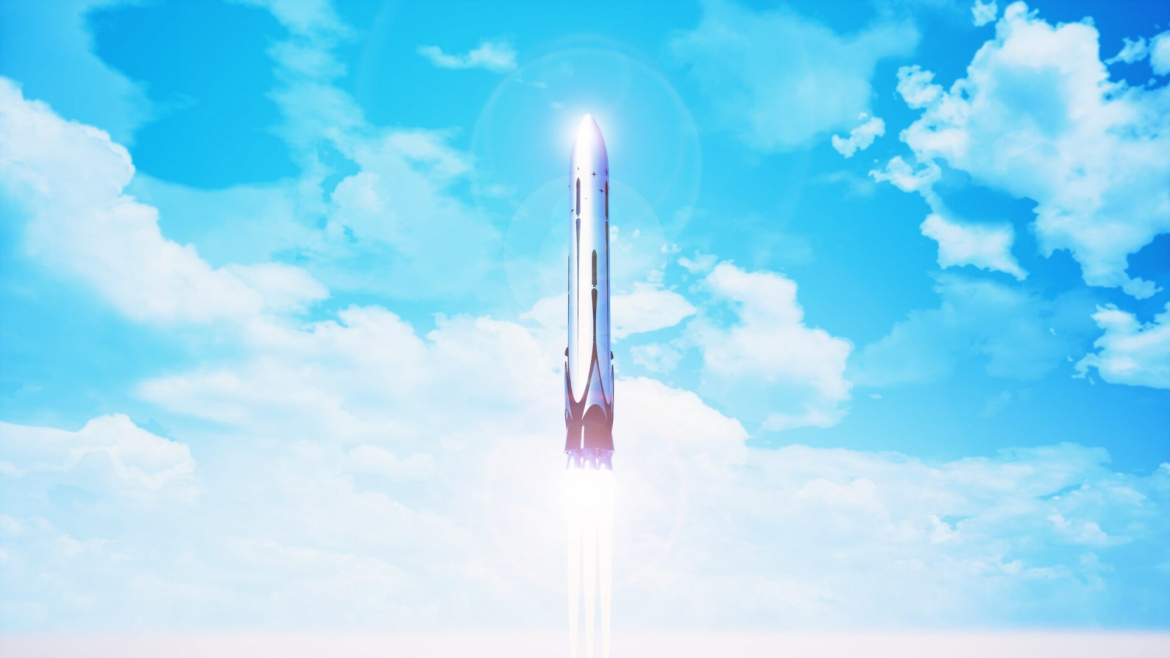 The ESA (European Space Agency) has taken a major step towards developing reusable rockets with the completion of a series of tanking tests for its Themis vehicle, which will serve as a testbed for the agency to experiment with launch and landing operations.

After initially announcing plans for a reusable rocket – Ariane Next – to succeed the Ariane 6 rocket currently in development, as well as the potential to incorporate reusability into Ariane 6 itself, the ESA has been working quietly on the project. While the initial announcements outlined hop tests of a pathfinder vehicle, Themis, the agency has recently given an update to its plans, whose ultimate goal is the development of a launch vehicle with a reusable first stage in the 2030s.

In a recent test series of six tests, two of the steel propellant tanks for Themis were successfully filled with cryogenic propellants and then detanked multiple times. This series of tests, comparable to those recently carried out on SpaceX’s Starship and United Launch Alliance’s Vulcan pathfinder vehicle, serve to reduce the risk of an electrical or tank malfunction with the completed vehicle.

The tanking tests have utilized the PF20 test stand at ArianeGroup’s facility in Vernon, France, which was first used during the development of the Ariane 1 rocket back in the 1970s. In parallel to the tanking tests, the rocket’s Prometheus engine is being prepared for a series of test firings at the P5 test stand in Lampoldshausen, Germany.

The Themis test stand complex at Vernon, with the prototype tanks (far left) — via ArianeGroup

Development of the Prometheus engine began in 2017 with funding through ESA’s FLPP (Future Launchers Preparatory Programme). It is an open-cycle engine burning methane and liquid oxygen (methalox), and is expected to generate around 980 kilonewtons (100 tonnes) of thrust. The name comes from the French Prométhée, which serves as a backronym for “Precursor Reusable Oxygen Methane cost Effective System.” The engine was completely funded in 2020, with ESA contracting ArianeGroup to undertake its development.

Prometheus will utilize 3D printing for up to half of its manufactured parts. With a target cost of one million Euros per engine–about a tenth of the cost of the current-generation Vulcain engine–this will help to reduce the cost of construction. As well as flying on Themis, Prometheus is expected to power ArianeGroup’s reusable successor to the Ariane 6 rocket, currently known as Ariane Next, which could debut in the 2030s. A liquid-hydrogen-powered version may also be introduced on the Ariane 6, in place of the Vulcain 2 which will be used for its initial flights.

For Themis, the next step of testing will see the vehicle fitted with its engine to undergo integrated tests, which will be undertaken at the same PF20 stand that has been used for the engine tests. Once this phase of testing is complete, operations will move to the Esrange Space Center in Kiruna, Sweden, where flight tests are expected to begin in 2023 with a new Themis flight demonstrator.

The Swedish Space Center and ArianeGroup recently completed the design stage and review for the new Launch Complex 3 at Esrange, which will be used when Themis begins a series of “hop” tests at the site. 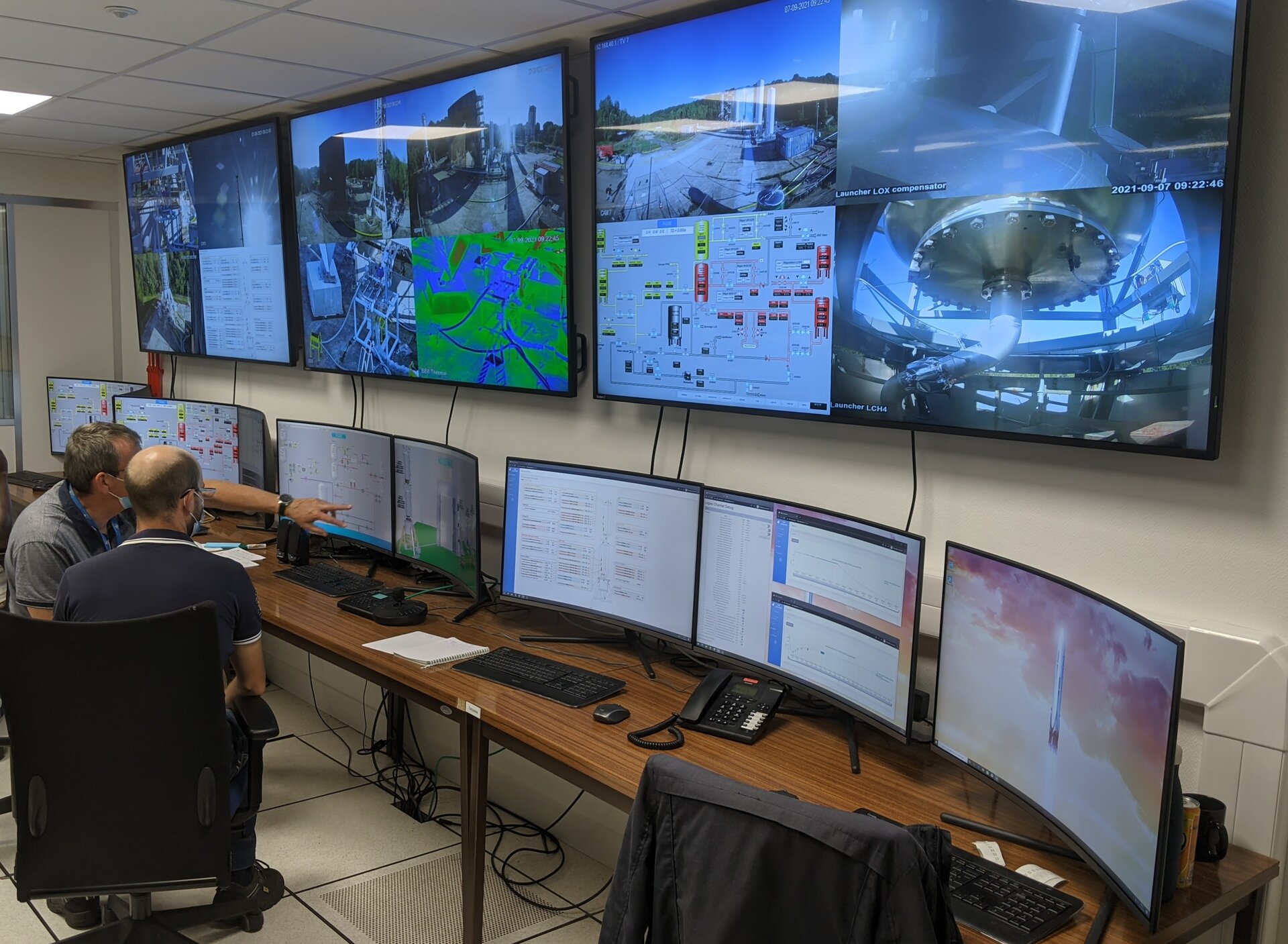 Controllers monitor a test of the Themis tanks — via ArianeGroup

This series of hop tests will be similar to the efforts SpaceX executed with its Grasshopper and Falcon 9R-Dev test vehicles while it was working on making the first stage of its Falcon 9 rocket recoverable. The test vehicles helped SpaceX understand the handling and performance of the boosters during landing. Grasshopper remains standing outside of SpaceX’s McGregor test site, having completed a series of eight successful flights–however, the Falcon 9R-Dev vehicle was destroyed during its fifth test flight.

The final phase of testing for Themis is planned for 2025, when a three-engine vehicle will perform a high altitude hop test, including reentry. In the event of a successful landing, the vehicle may undergo refurbishment and be flown again to demonstrate reuse. The construction of the tank section for the hop vehicle has already begun, while other components are currently in their final design and approval stages.

Themis is one of three reusability projects that ESA and its partner nations are participating in to help develop technologies for their future rockets. The other projects, FROG and CALLISTO, are being led by the French space agency, CNES.

The small-scale FROG vehicle performed a series of flights in 2019 to get a better understanding of the vertical landing of a rocket stage. This project was focused on testing GNC (Guidance, Navigation, and Control) software. The FROG rocket measured only 2.5 meters in length with a mass of 22 kilograms. It used a motor producing up to 400 newtons of thrust for up to 150 seconds to fly to altitudes of up to 30 meters. 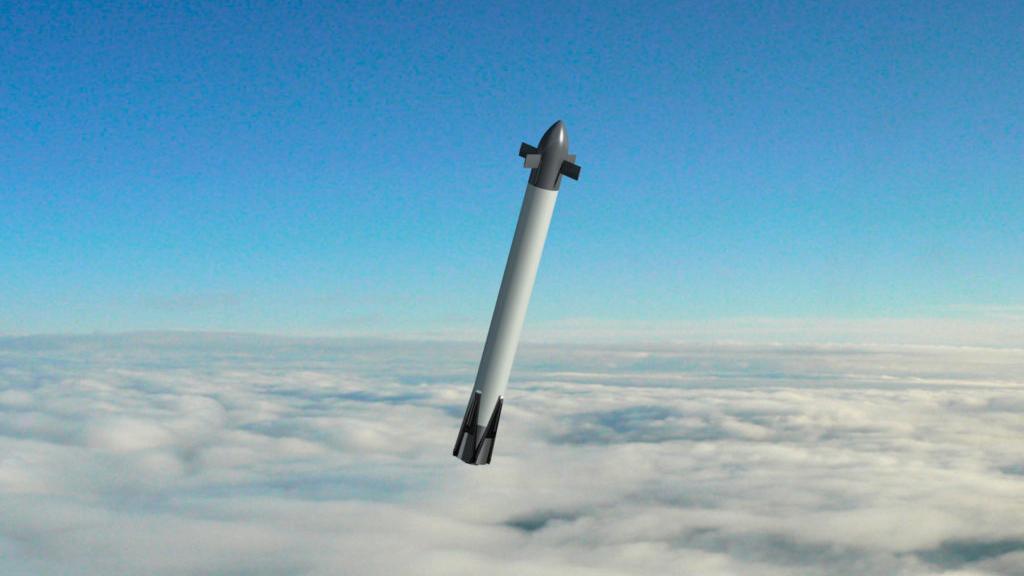 Render of the CALLISTO vehicle in flight — via DLR

CALLISTO (Cooperative Action Leading to Launcher Innovation in Stage Toss-Back Operations) is a separate project, being carried out in conjunction with the DLR (German Aerospace Center) and JAXA (Japan Aerospace Exploration Agency). This will be a single-stage pathfinder vehicle that aims to furnish the participants with a better understanding of the technologies, challenges, and costs of operation for such a rocket.

The CALLISTO rocket is expected to measure about 15 meters in length and one meter in diameter. It will be powered by a reusable cryogenic engine, which will propel it to an altitude of 30 to 40 kilometers, before returning back to Earth. CALLISTO was expected to fly as early as 2022, with up to 10 test flights being planned for 2023, however there have been no recent updates on the status of the project.

Private companies based in Europe have announced their own reusability plans for their rockets. Rocket Factory Augsburg, based in Bavaria, Germany, is developing the three-stage RFA One rocket. While no detailed plans for this have yet been made public, the first stage is expected to incorporate some form of recovery and reusability. The rocket is planned to make its first launch in late 2022, although it is not known on which mission RFA will debut their reusability plans.

(Lead image: Render of the Themis rocket in flight — via CNES)