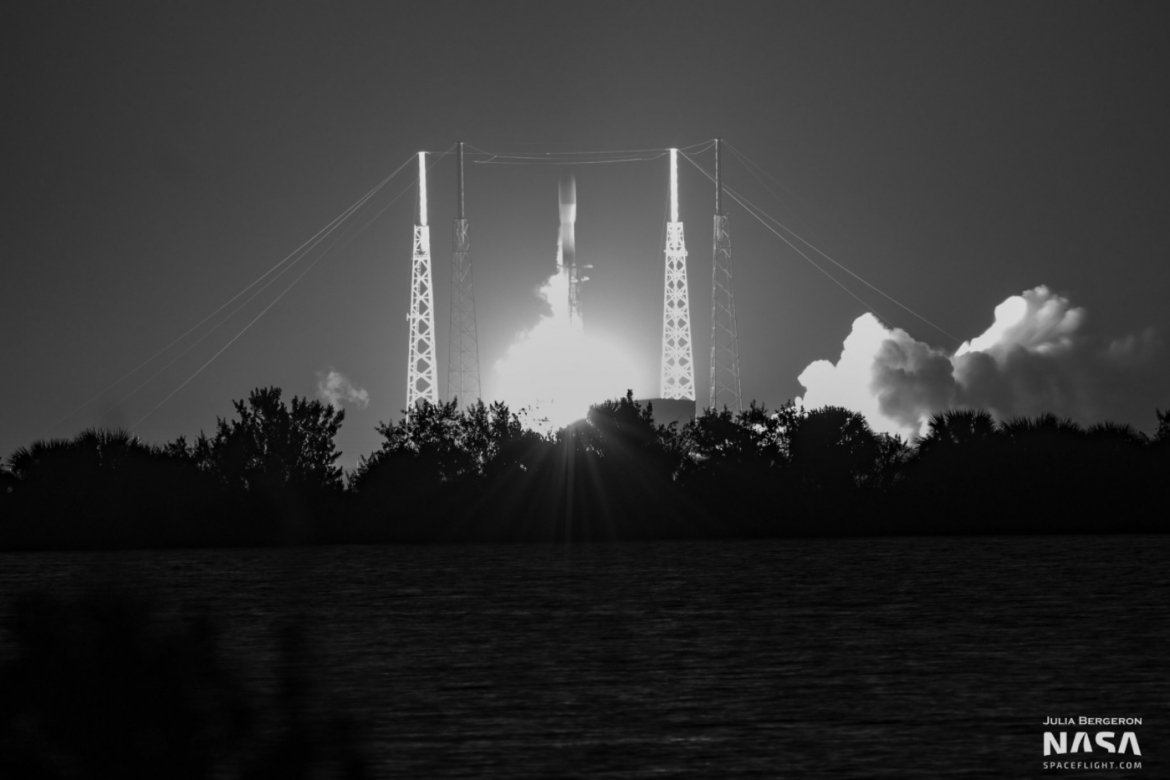 The 45th Weather Squadron of Space Launch Delta 45 at Patrick Space Force Base predicted an 80% chance of acceptable weather for launch. Should weather, technical issues, or anything else have required that the launch be delayed from Saturday evening’s window, a backup opportunity existed 24 hours later with a forecasted 60% chance of favorable weather.

The Turksat-5B mission was the second Falcon 9 launch of the day. The first launched from SLC-4E (Space Launch Complex 4 East) at Vandenberg Space Force Base in California at 4:41 AM PST (12:41 UTC) carrying 52 of the company’s Starlink internet satellites to orbit, designated the Group 4-4 mission.

By launching at the opening of the Turksat-5B window, SpaceX set a new record for the shortest time between two Falcon 9 launches at 15 hours and 17 minutes. The previous record time was 44 hours and 17 minutes, set between the Starlink Group 2-1 and Inspiration4 missions.

SpaceX is planning to conclude its 2021 launch campaign with one more launch on Tuesday, December 21, which would mark three Falcon 9 launches within three days. The CRS-24 resupply mission to the International Space Station is scheduled to lift off from LC-39A (Launch Complex 39A) at the Kennedy Space Center at 5:06 AM EST (10:06 UTC) Tuesday morning.

These three missions round out a total of 31 Falcon 9 launches in 2021.

The Turksat-5B payload is a geostationary communications satellite to be operated by Turksat. It is the second of three Turksat spacecraft to launch on Falcon 9, following the launch of Turksat-5A in January 2021 and preceding the Turksat-6A satellite launching no earlier than 2022.

Like Turksat-5A, Turksat-5B was built by Airbus Defence and Space and is based on the Eurostar-3000EOR spacecraft bus. The spacecraft is powered by a pair of deployable solar arrays and has a launch mass of approximately 4,500 kilograms. 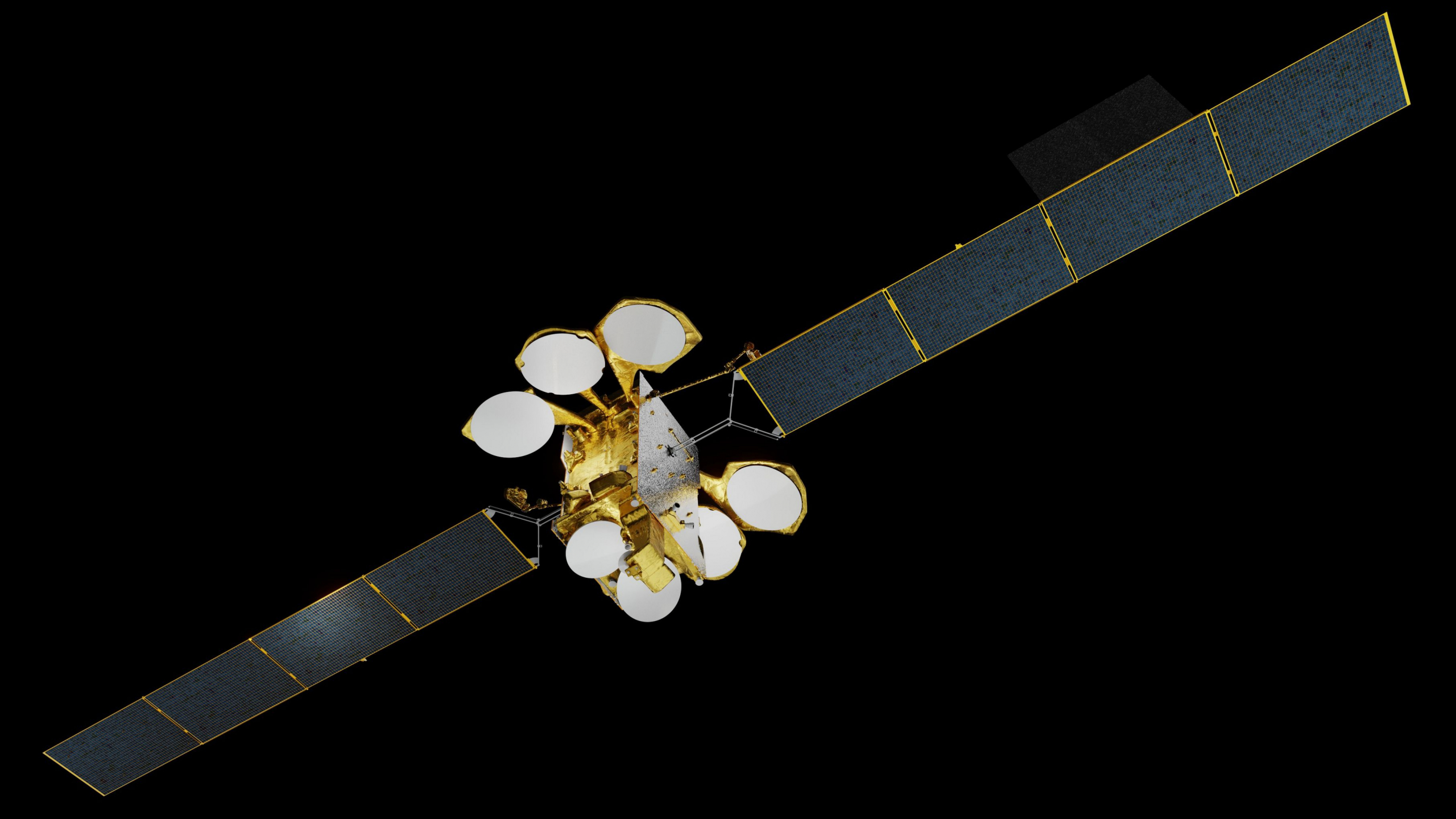 Rendering of the Turksat-5B spacecraft – via Airbus

The satellite hosts Ku-band, Ka-band, and X-band payloads for a combination of civilian and military communications capabilities. Turksat-5B is designed to conduct a 15-year-long mission, stationed at the 42 degrees East position in geostationary orbit.

That is, the satellite will orbit at geostationary altitude (35,785 kilometers) and zero degrees inclination, always over the equator at 42 degrees East longitude.

The satellite was not deployed directly into this orbit by the SpaceX Falcon 9 launch vehicle. Instead, Falcon 9 deployed Turksat-5B into a geostationary transfer orbit, and the satellite will use its own propulsion to maneuver to its operational geostationary orbit. This approach is common for launching geostationary satellites as it reduces the performance demand on the launch vehicle–in this case,  enabling a reusable Falcon 9 to launch Turksat-5B instead of heavier lift options, with Falcon’s first stage landing on a drone ship downrange. 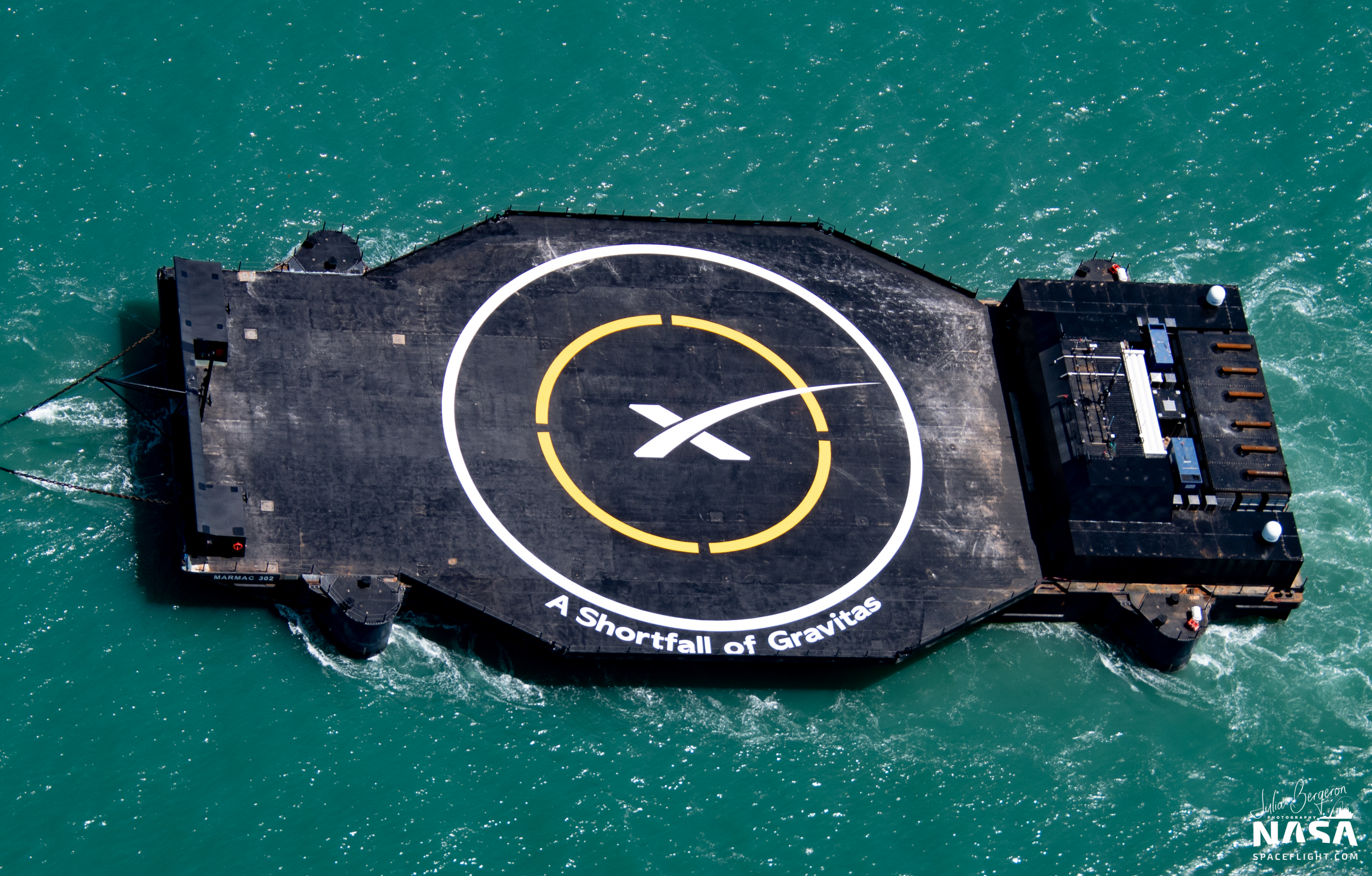 The drone ship, A Shortfall of Gravitas — via Julia Bergeron for NSF/L2

SpaceX’s newest drone ship, A Shortfall of Gravitas, was stationed approximately 661 kilometers downrange, due East from Cape Canaveral. The drone ship was tugged by Finn Falgout, and supported by the multi-purpose vessel Bob, which also conducts fairing recovery about 797 kilometers downrange.

The first stage for this launch is B1067-3. This booster previously launched the CRS-22 and Crew-3 missions to the ISS, and it is the newest vehicle in the active SpaceX fleet.

B1067 began the Turksat-5B mission by igniting its nine Merlin 1D engines at T-0. These engines are fueled by RP-1 (Rocket Propellant 1) kerosene and LOX (Liquid Oxygen), which is loaded over the course of the 35-minute-long countdown.

Reused fairing, reused booster. It’s all in a day’s work for Falcon 9.
This fairing once encapsulated the GPSIII SV05 satellite, and booster B1067 supported two Dragon missions – CRS-22 and Crew-3. pic.twitter.com/WPZsu7jBl9

After clearing the towers at SLC-40, Falcon 9 pitched downrange, targeting a due East heading. This maximizes the performance on missions to geostationary orbit by reducing the propellant required to change inclination to zero–either for the launch vehicle or the spacecraft. In the case of Turksat-5B, the spacecraft will conduct this “plane change” maneuver as part of its post-launch orbit-raising.

The nine first stage engines throttle down briefly during the period of maximum dynamic pressure on the vehicle, or Max Q, and then throttle back up to full thrust until MECO (main engine cutoff). This is followed immediately by stage separation and SES-1 (second engine start) of the vacuum-optimized Merlin engine on the second stage.

The payload fairing separates shortly after the beginning of this upper stage burn. While the second stage carries Turksat-5B to an initial parking orbit, the first stage deploys its grid fins and conducts its entry and landing burns to touch down on A Shortfall of Gravitas.

After SECO-1 (second engine cutoff), shutting down the MVac (Merlin vacuum) engine in an initial parking orbit, the upper stage and satellite coast toward a second burn and then payload deployment. Following separation, Turksat-5B deploys its solar arrays and communications payloads to begin maneuvering the rest of the way to geostationary orbit.