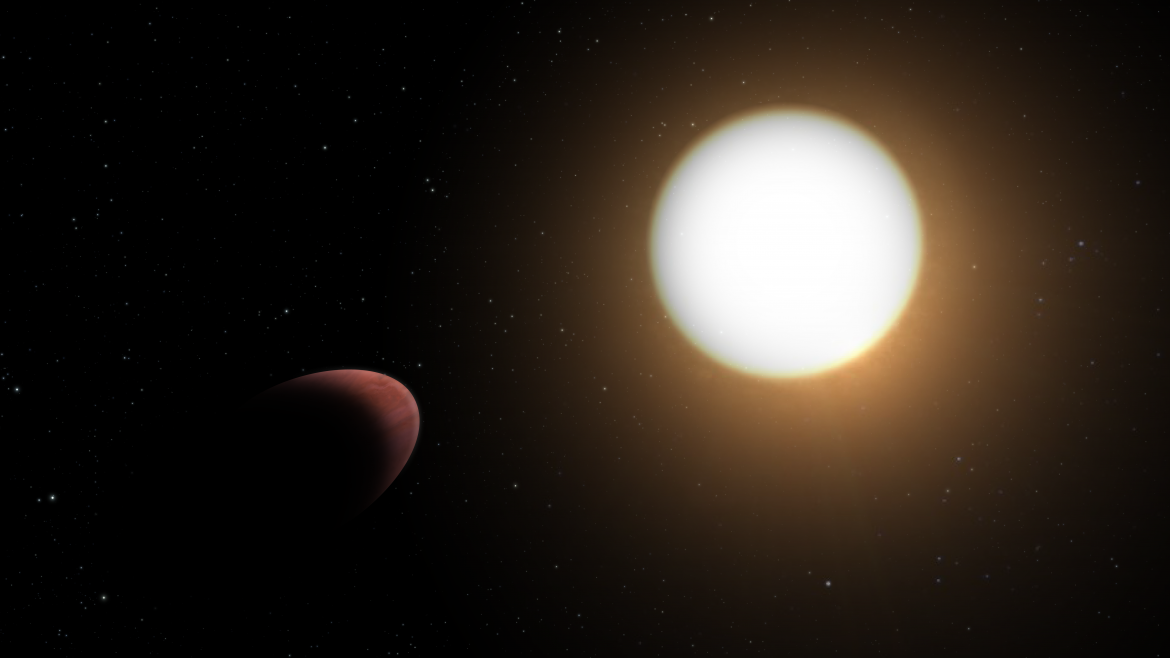 Exoplanets all over the universe come in different sizes, compositions, colors, and temperatures. However, they typically don’t come in different shapes, as nearly every single planet ever discovered is thought to be spherical in shape — except for one.

New data from the European Space Agency’s (ESA) Characterising Exoplanets Satellite (CHEOPS) space observatory, as well as data collected by the NASA/ESA Hubble Space Telescope and NASA’s Spitzer Space Telescope, has revealed the shape of an exoplanet that features many extreme characteristics. The CHEOPS data is the first time astrophysicists have ever detected the deformation of an exoplanet and provides valuable information into the internal structure of exoplanets.

The planet in question is WASP-103b, a super-Jupiter exoplanet located in the constellation Hercules. WASP-103b orbits the star WASP-103, an F-type main-sequence star that is located 1,800 ± 100 light-years away from our solar system. WASP-103 is about 1.7 times larger than our Sun and is around 200 degrees hotter.

WASP-103b has many unique features. Discovered in 2014, it is approximately twice the size and 1.5 times the mass of Jupiter, features an atmosphere that contains water, and orbits its star in less than a day. The exoplanet was discovered via the transit method, wherein a star is observed as an exoplanet transits it — allowing scientists to calculate the contents of a planet’s atmosphere (if it has one) and its size. 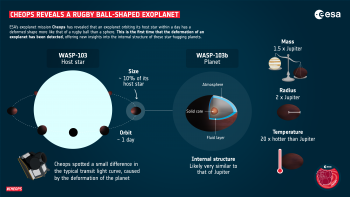 The extremely short orbital period of WASP-103b is the main cause of the planet’s odd shape. The reason for WASP-103b’s short orbital period is the distance at which it orbits WASP-103 — with the exoplanet’s semi-major axis being an astonishing 0.01987 astronomical units (AU) — one AU being the approximate average distance between the Sun and the Earth. The smaller the orbit of a planet, the faster it will orbit its host star.

Like Earth, WASP-103b experiences tidal tugging from its host star. However, WASP-103b’s extremely tight orbit allows WASP-103 to exert a much stronger tidal force on the planet. This powerful tidal tug is what caused the deformation of WASP-103b.

Astrophysicists and astronomers who have studied the WASP-103 system had for many years theorized that WASP-103b’s star-hugging orbit would cause tidal deformation of the planet’s crust. However, they hadn’t been able to efficiently measure the exact amount of tidal force exerted on the exoplanet until CHEOPS’ capabilities allowed them to do so.

CHEOPS is able to measure the specific properties of exoplanets by measuring the transits of exoplanets in front of the stars they orbit. As aforementioned, the transit method involved observing a star as an exoplanet crosses in front of it. When this occurs, the amount of light that is emitted by a star will dip and create a light curve, allowing scientists to measure characteristics including the shape, size, and atmospheric contents of the planet.

Most telescopes are able to observe the transiting of an exoplanet; however, CHEOPS’ advanced precision and flexibility allow it to observe very small changes in the light curve produced by an exoplanet transit event. This is precision is what allowed CHEOPS to observe the deformation in WASP-103b’s shape.

“It’s incredible that Cheops was actually able to reveal this tiny deformation,” says Jacques Laskar of Paris Observatory, Université Paris Sciences et Lettres, and co-author of the research. “This is the first time such analysis has been made, and we can hope that observing over a longer time interval will strengthen this observation and lead to better knowledge of the planet’s internal structure.”

An example of a light curve generated from an exoplanet transiting its star. (Credit: NASA Ames)

Using the light curve CHEOPS produced from WASP-103b’s transit of WASP-103, researchers were able to derive a value known as the Love number. The Love number measures the amount of mass and how mass is distributed within a planet. Having the Love number provides insight into the internal structure of a planet.

“The resistance of a material to being deformed depends on its composition,” explains the study’s lead author, Susana Barros of Portugal’s Instituto de Astrofísica e Ciências do Espaço and the University of Porto.

“For example, here on Earth we have tides due to the Moon and the Sun but we can only see tides in the oceans. The rocky part doesn’t move that much. By measuring how much the planet is deformed we can tell how much of it is rocky, gaseous, or water.”

“In principle, we would expect a planet with 1.5 times the mass of the Jupiter to be roughly the same size, so WASP-103b must be very inflated due to heating from its star and maybe other mechanisms,” said Barros.

Although the derived Love number provides some insight into the inner workings of WASP-103b, it is quite high, and there is still some uncertainty in the viability of the number. The recently launched James Webb Space Telescope will work together with CHEOPS in the future to continue measuring the tidal deformation of WASP-103b and other exoplanets like it.

“If we can confirm the details of its internal structure with future observations maybe we could better understand what makes it so inflated. Knowing the size of the core of this exoplanet will also be important to better understand how it formed,” Barros explained.

1/ Not all planets are spheres!

The deformation – caused by strong tidal forces between the planet and its host star – was spotted by #Cheops 👉https://t.co/2gJ7JB70JT pic.twitter.com/23cXlaMtyv

On top of the strange deformation of WASP-103b, it also exhibits weird orbital properties with its star.

Typically, when a planet as large as WASP-103b orbits extremely close to a star like WASP-103, the tidal interactions between the two bodies would gradually pull the planet’s orbit closer to the star, until the planet is eventually engulfed by the star.

However, the exact opposite is happening with WASP-103b.

The measurements taken by CHEOPS of WASP-103b seem to show that the exoplanet is slowly drifting away from its parent star and that its orbital period is increasing. This would suggest that there must be a force stronger than that of WASP-103’s tidal force pulling the exoplanet away from the star.

Barros and her fellow researchers investigated several different scenarios that tried to tackle the question of what exactly is pulling WASP-103b away from its star. One of these scenarios involved a companion star to WASP-103 that would cause the effects the team saw in the data, while another scenario investigated whether or not an elliptical orbit could be causing the effects that the scientists observed.

The team of researchers was unable to verify if any of the scenarios were correct, but they aren’t ruling them out. In fact, the orbit of WASP-103b could not be increasing at all and actually be decreasing. However, to confirm this, further observations and transits of WASP-103b are needed.

CHEOPS (CHaracterising ExOPlanets Satellite) launched on December 18, 2019, atop a Soyuz ST-A rocket, flight number VS23, from Kourou, French Guiana. The observatory is operated by the European Space Agency (ESA) in an approximately-700-kilometer sun-synchronous polar orbit.

The primary goal of CHEOPS is to measure the size of exoplanets orbiting stars throughout the universe. Being able to determine the size of an exoplanet allows teams to then estimate its mass, density, composition, formation, and other characteristics. Additionally, CHEOPS is the first mission dedicated to studying exoplanets surrounding nearby stars that have previously been confirmed to have exoplanets. This allows CHEOPS to build off of previous research and data.

CHEOPS is able to perform these measurements by observing the transits of exoplanets in front of their respective stars, allowing the observatory to create light curves which showcase the characteristics of the exoplanets it is studying. CHEOPS primarily targets exoplanets in the super-Earth to Neptune size range.

“The size of the effect of tidal deformation on an exoplanet transit light curve is very small, but thanks to the very high precision of CHEOPS we are able to see this for the first time,” said Kate Isaak, ESA Project Scientist for CHEOPS.

“This study is an excellent example of the very diverse questions that exoplanet scientists are able to tackle with CHEOPS, illustrating the importance of this flexible follow-up mission,” said Issak.

As of January 2021, CHEOPS is a little over two years into its mission, which is expected to last three and a half years.

EGS, Jacobs working to finish testing in time for Artemis 1 rollout in mid-February