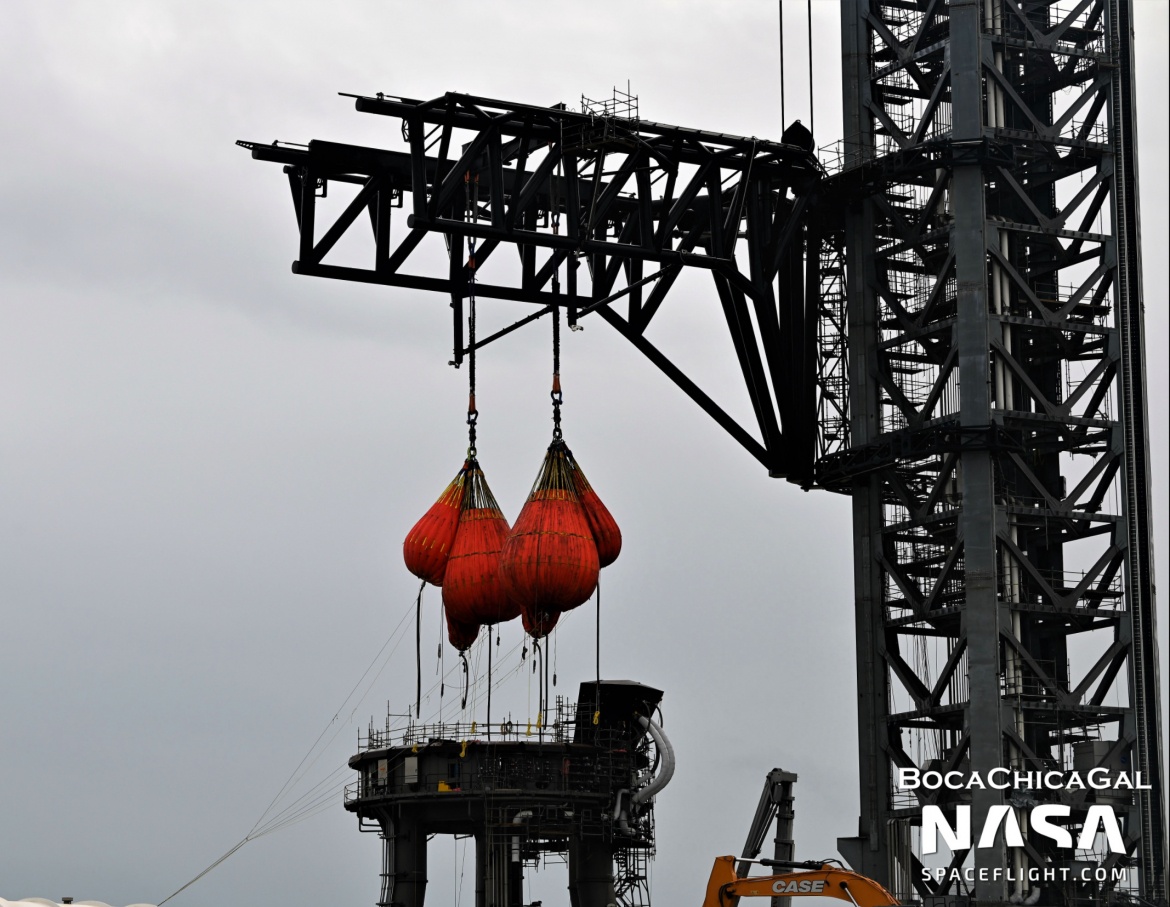 Having conducted the first series of Mechazilla catch and stack systems tests, SpaceX’s Starship program has come one step closer to seeing another fully stacked Starship on the Orbital Launch Mount (OLM).

Several tests were conducted with the chopsticks, paving the way for the first lift of a booster and a ship’s potential stacking following the previous full-stack operation conducted by a crane.

Testing the chopsticks began the night of January 2, when they were raised a few feet before being lowered onto their resting blocks.

Testing continued on January 4, when they were raised higher than previous tests. Each arm was rotated open individually over several hours, separately testing each significant system component for the first time.

The next test conducted was what appeared to be an exercise of the entire Mechazilla system, using the chopsticks in a simulated lift a Starship to a full-stack height before swinging the Ship Quick Disconnect (QD) arm into place to stabilize the full stack. However, this time the arms did not open wide to the position that they would be in during a launch attempt.

Chopsticks move at record speed! This is still a timelapse, but they reached the top in only seven minutes!https://t.co/YhZS6puC2M pic.twitter.com/6eVRfPHZcc

The next series of tests included SpaceX hooking a bar between the chopsticks before attaching multiple load test bags to the bar.

The Chopsticks were then raised, with the bags empty, to the top of the tower at a previously unseen speed, reaching the top in just under nine minutes. SpaceX later filled four of the bags with water before raising the chopsticks and translating them above the OLM.

It is hoped that checkouts of the chopsticks will allow Booster 4, or Booster 7, to be lifted onto the OLM in the coming weeks.

Following the fit check stacking of Booster 4 and Ship 20, the test campaign for Booster 4 kicked off back on December 17, with SpaceX conducting a partial cryogenic proof test, partially filling B4’s methane tank with liquid nitrogen (LN2).

These tests are conducted to verify the tanks’ structural integrity and ability to hold the super-chilled liquid methane and liquid oxygen needed for a test flight.

The next test, conducted on December 21, included SpaceX partially filling the liquid oxygen tank with LN2 for the first time, with a repeat performance for the methane tank.

The most recent test of Booster 4 saw teams fill the liquid oxygen tank with LN2 before filling the methane tank nearly halfway, potentially paving the way for the first round of static fire tests on the OLM.

However, it has not yet been confirmed that Booster 4, and the OLS Tank Farm, are at the required state of readiness for such a test.

SpaceX has not received certification to store methane in their custom-built GSE tanks, as confirmed by regulations from the Texas Railroad Commission, which regulates natural gas storage in Texas.

Should SpaceX opt to move to the next Super Heavy for Static Fire testing, Booster 7 would be the vehicle. 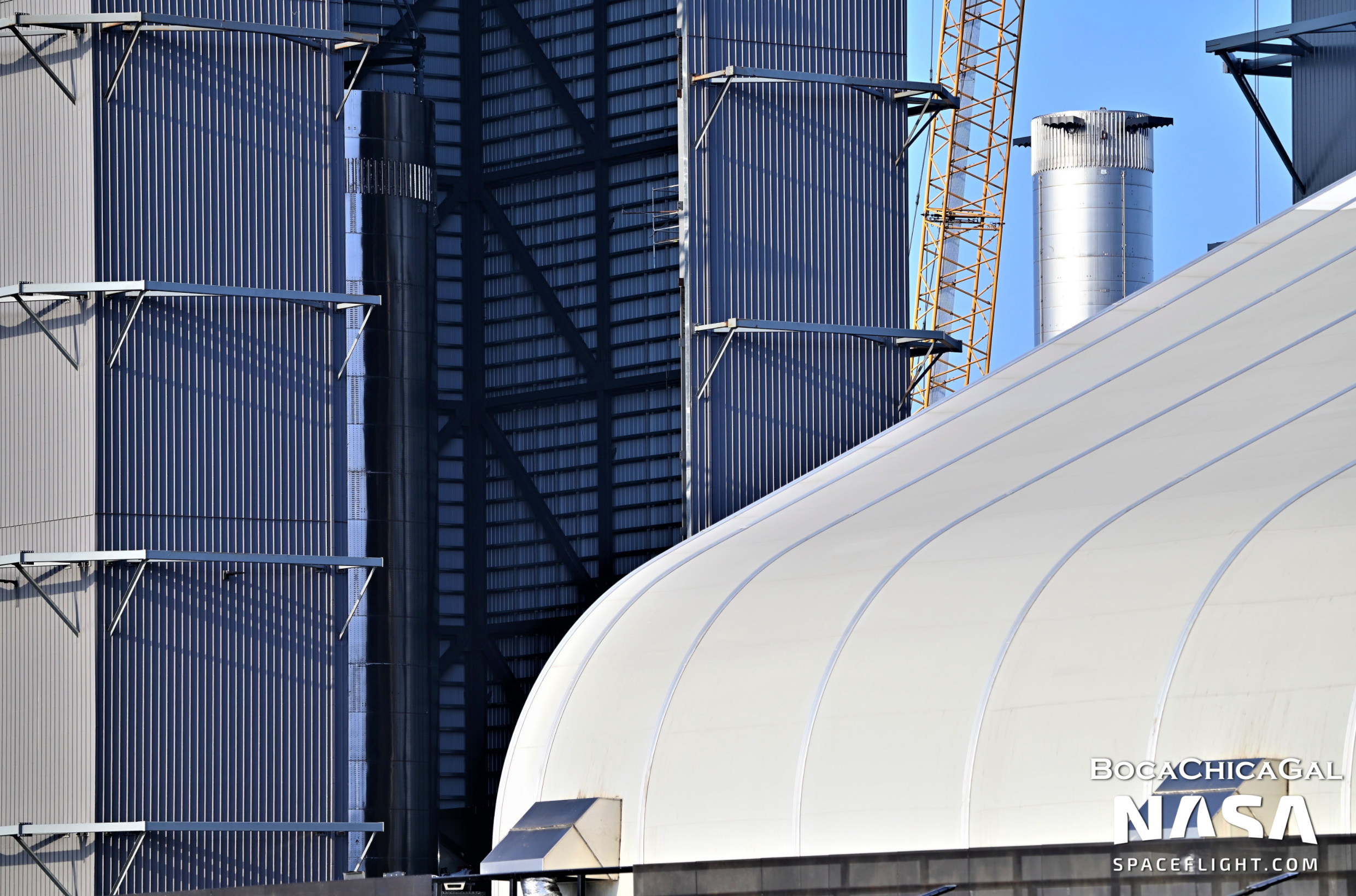 Booster 7 in the High Bay, via Mary (@bocachicagal) for NSF L2

Stacking ops have continued in the High Bay, with the Liquid Oxygen (LOX) Aft Tank #5 being rolled into the High Bay ahead of being joined to the rest of the aft tank stack.

Despite Elon only recently confirming that the next Booster would have 33 Raptor 2 (R2) engines, the first thrust puck capable of accommodating 33 R2’s was first spotted in October of 2021. This next Booster has since evolved into Booster 7, with Booster 6 becoming a test tank.

With Ship 20 having conducted a series of Static Fire tests, with the potential for more over the coming weeks, Ship 21’s tank section has been moved around the Production Site, taking up stints inside both the Mid Bay and High Bay. 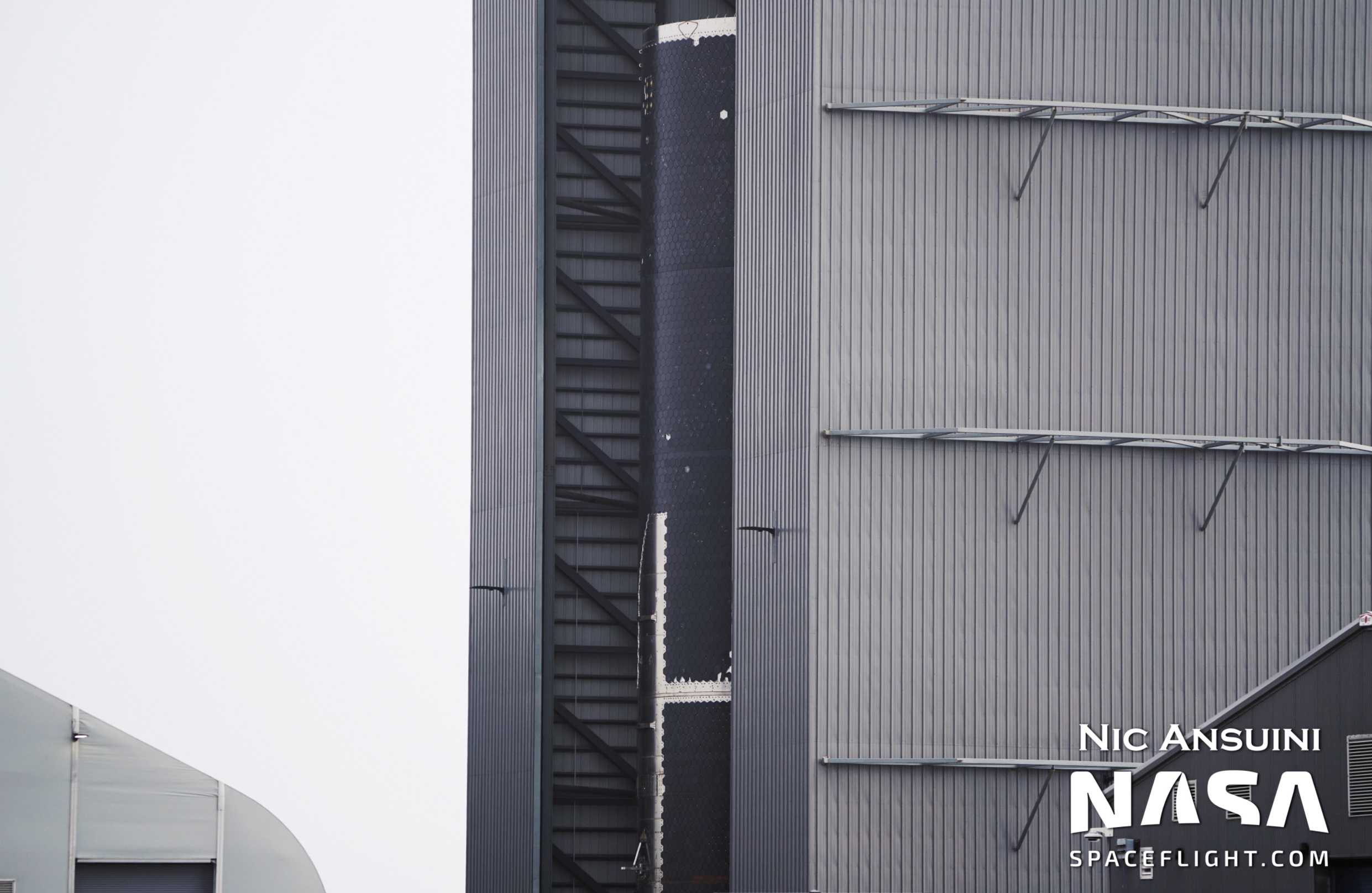 Ship 21’s tank section was rolled around the Production Site, making multiple trips in and out of the Mid and High Bays before being rolled back into the Mid Bay one last time.

While work on Ship 21 has seemingly halted, SpaceX has continued to work on Ship 22, adding hinges to the nosecone barrel, indicating that the barrel could be repurposed to be a cargo bay door pathfinder.

The last time a cargo bay pathfinder was spotted was in July 2021, when a nosecone barrel was cut open along with part of the nosecone itself. At the time, Elon noted that the exact payload bay door dimensions were yet to be determined and that the volume was roughly 1,000 cubic meters.

Meanwhile, crews have started working on Ship 24, with multiple parts spotted and the Common Dome sleeved. Mary (@bocachicagal) spotted the sleeve on December 24 and captured it being put onto the sleeving stand and sleeved on January 3 and 4, respectively. 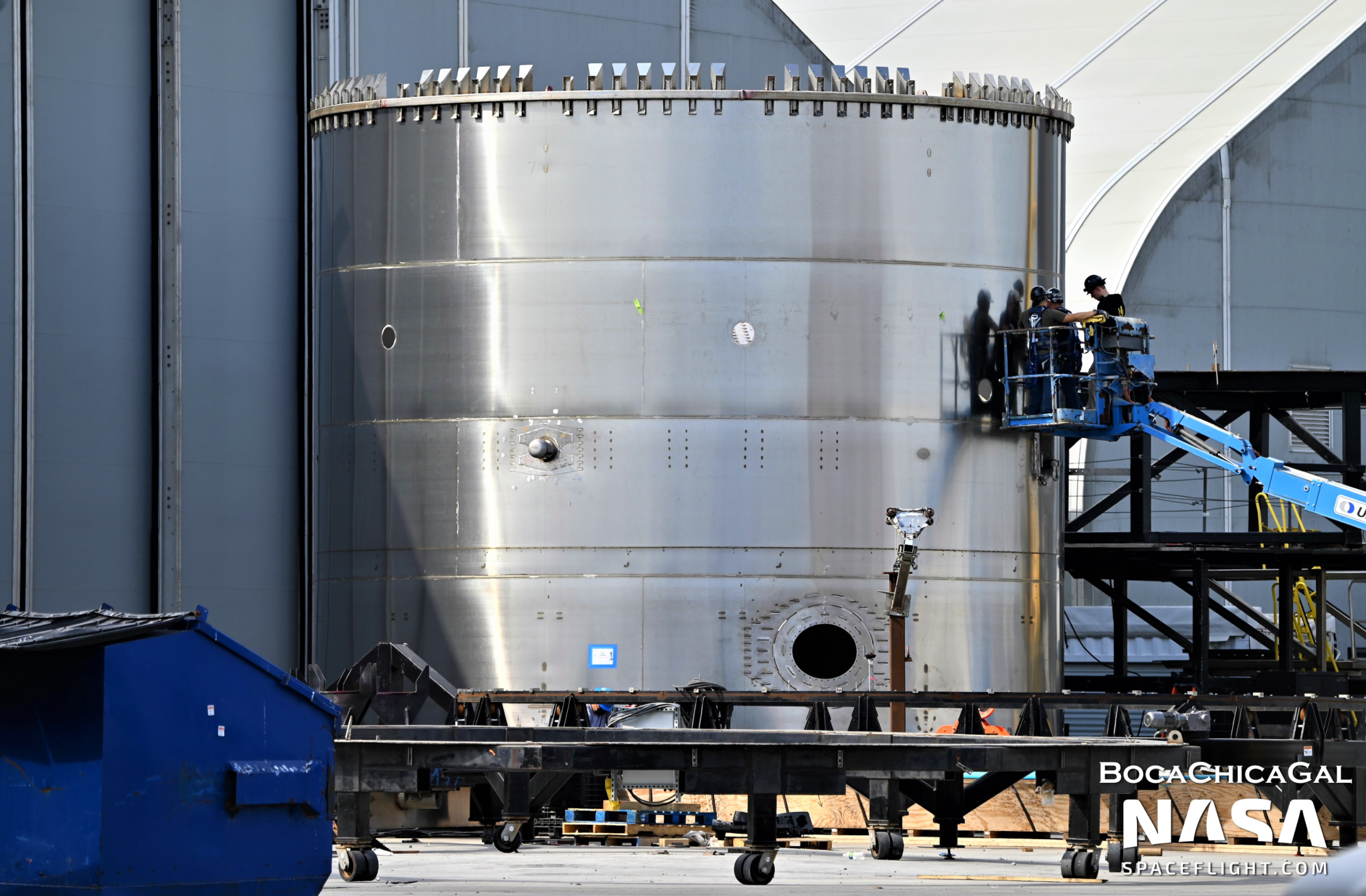 Additionally, SpaceX has continued to add capacity at the Production site, with work on the third level of the new wider High Bay starting.

Along with the previous level, SpaceX has shifted to constructing sections of the Wide Bay on the ground before lifting them onto the previous level. It appears that this change is to speed up construction, as SpaceX has been able to make progress on the second and third levels much faster than the first level. 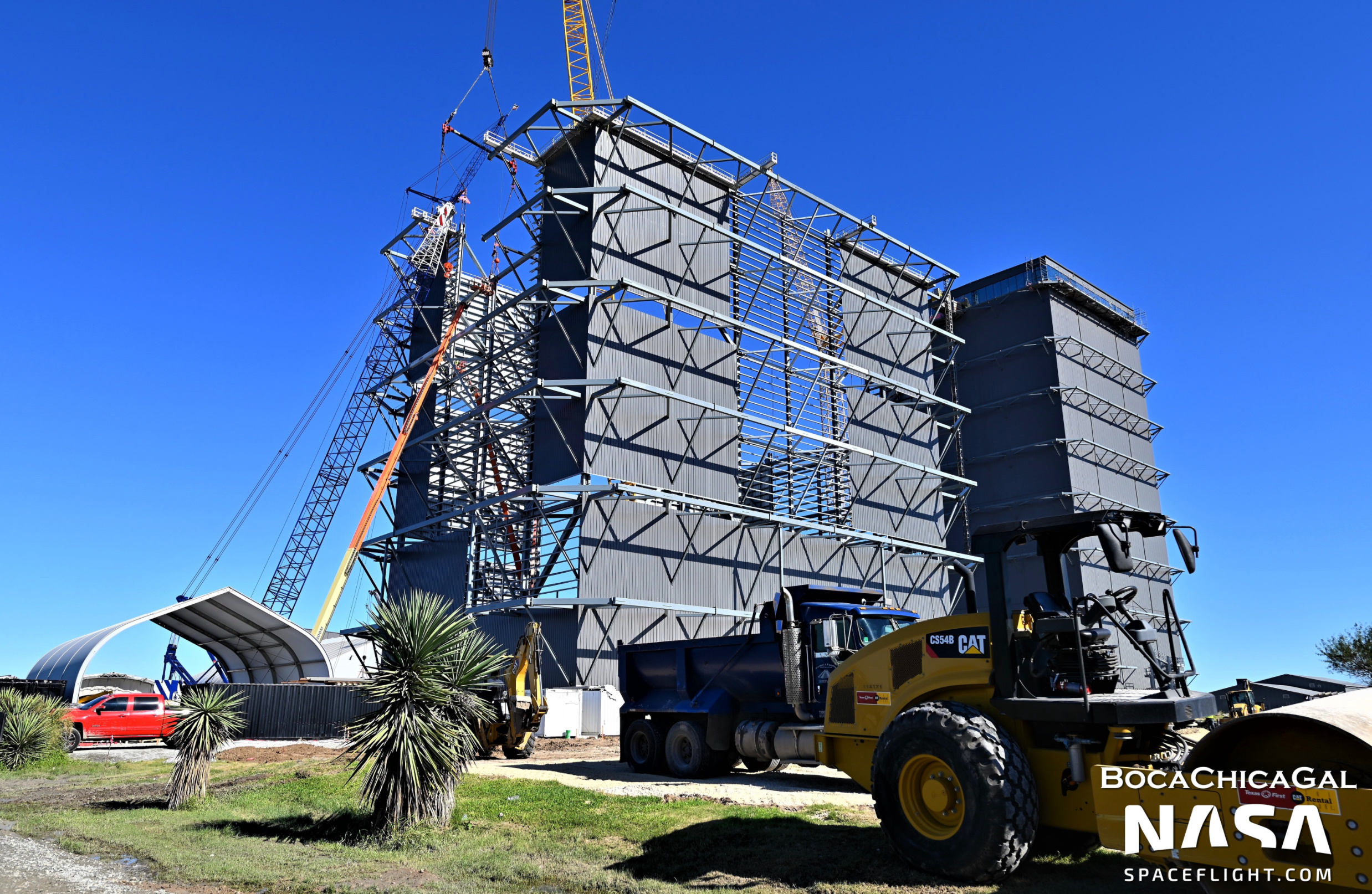 The “Wide Bay” will allow SpaceX to work on multiple Boosters or Ships at once, something they’ve been unable to do before. Previously, Ships could only be assembled to their forward dome section in the Mid Bay before being rolled to the High Bay for nosecone integration.

The “Wide Bay” will allow SpaceX to fully assemble a Booster and Ship simultaneously before rolling them to the launch site for tests.