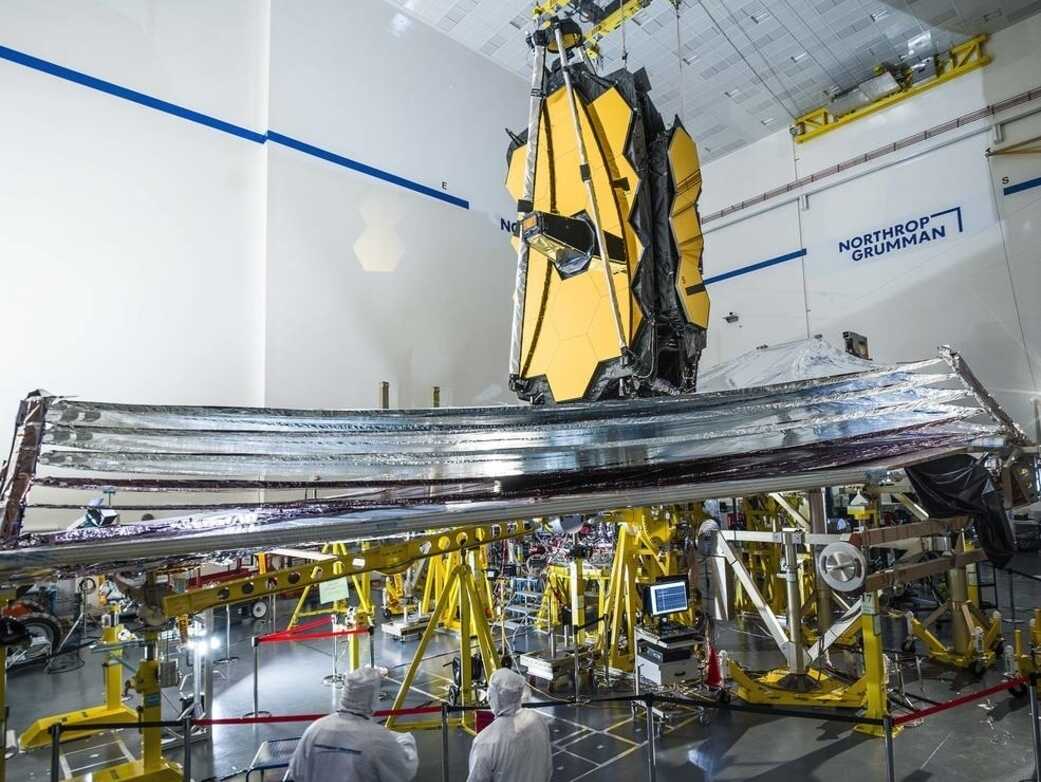 The feat capped an impressive series of engineering accomplishments, with all major critical deployments that could have ended the mission outright passing without major issue. Final mirror deployment followed the successful unfurling of the massive sunshield — a first-of-its-kind operation that saw Northrop Grumman’s decades of work on the project come to fruition.

James Webb successfully launched atop an Arianespace Ariane 5 rocket on December 25, 2021, from the Guiana Space Centre in Kourou, French Guiana. T+29 minutes after launch, the telescope successfully deployed its solar array four minutes ahead of schedule due to the near-perfect performance of the Ariane 5 rocket.

The deployment accuracy of the Ariane 5 was so good that the amount of propellant remaining on JWST will allow the observatory to operate for nearly 20 years — 10 years longer than originally expected.

Three days after launch marked the beginning of the sunshield’s deployment sequence with the deployment of the forward and aft Utilized Pallet Structures (UPS). JWST’s sunshield is a mission-critical, 14.162 × 21.197 meter, five-layer membrane, used to cool the observatory and block the light and heat from the Sun.

The sunshield mid-booms successfully deployed at T+6 days. The booms are attached to the shield membranes, and when deployed, pulled out the entire shield.

After a two day break to allow teams to learn more about how JWST was operating in space, tensioning of the five sunshield membranes began on January 3, 2022, and concluded on January 4 — completing the sunshield deployment sequence.

“It’s [been] a little surreal to me because I’ve been on the program so long,” related Marc Roth, vehicle engineering mechanical and commissioning deployments lead for operations at Northrop Grumman who has been with the program for over eight years.

“I had gotten used to seeing the vehicle and the hardware and being present with it just about every day on the ground. It’s basically been at a full assembly level over the sunshield for about four and a half years, give or take, since mid-2017. It almost didn’t feel real that we were deploying it on orbit because we had seen it deploy every other time before that.”

Joe Sprofera, dynamics lead for the JWST program at Northrop Grumman, added, “I started on it when I started at Northrop. The one thing I’ve known the entire time,” he said while reflecting on his 16 years with the program.

For the deployment sequence itself and what kind of data teams were looking at during the critical process, Hillary Stock, deployment specialist at Northrop Grumman specializing in the sunshield, related, “When we’re actually running the tensioning operations, we’re driving motors, and those motors have a handful of telemetry points that we’re looking at.”

Shields up! @NASAWebb has completed the tensioning of its tennis-court-size sunshield.

This five-layered shade will protect the telescope from the heat of the Sun, Earth and Moon, helping it #UnfoldTheUniverse in infrared light. Details & next steps: https://t.co/m9eFc0ysib pic.twitter.com/qF1UQV3cIY

“We get the motor current, the motor’s position, and we’re understanding how it’s responding to resistance. There’s certain events that occurred during tensioning that we use as benchmarks to know we’re in the right spot, we have the right load; and it gives us a big insight into how the whole system is responding.”

Hillary continued, saying, “We’re looking for those little benchmark telemetry signatures as we’re going through each motor move in each operation. So that’s really why we’re all here is we’re watching that motor telemetry, and we know what to look for based on experience with the hardware.”

“It’s not necessarily a specific value, it’s not something you can flag with an alarm. It’s more a trend in the data and an observation based on how the motor’s performing at the time.”

Marc continued, saying, “What we do have in the system are fault limits. We don’t expect to see the system respond with us going towards those fault limits, but they are in place just in case we reach them because of some unknown out there. In terms of the sunshield tensioning, we didn’t get near any of them.”

To the performance of the overall sunshield deployment system, Joe reflected: “I couldn’t have been happier with the way it went overall. It was, once we’ve gotten into that tensioning phase, as smooth as it could have been, really. It was pretty incredible to complete it, especially within two days [of the fastest possible schedule] — which I think exceeded all of our expectations.”

Marc agreed: “Every time I would ask, everyone was pleasantly surprised that we were running very, very nominal and basically repeating some of our ground deployment scenarios. So it was very easy to line up data and know that everything was going so well.” 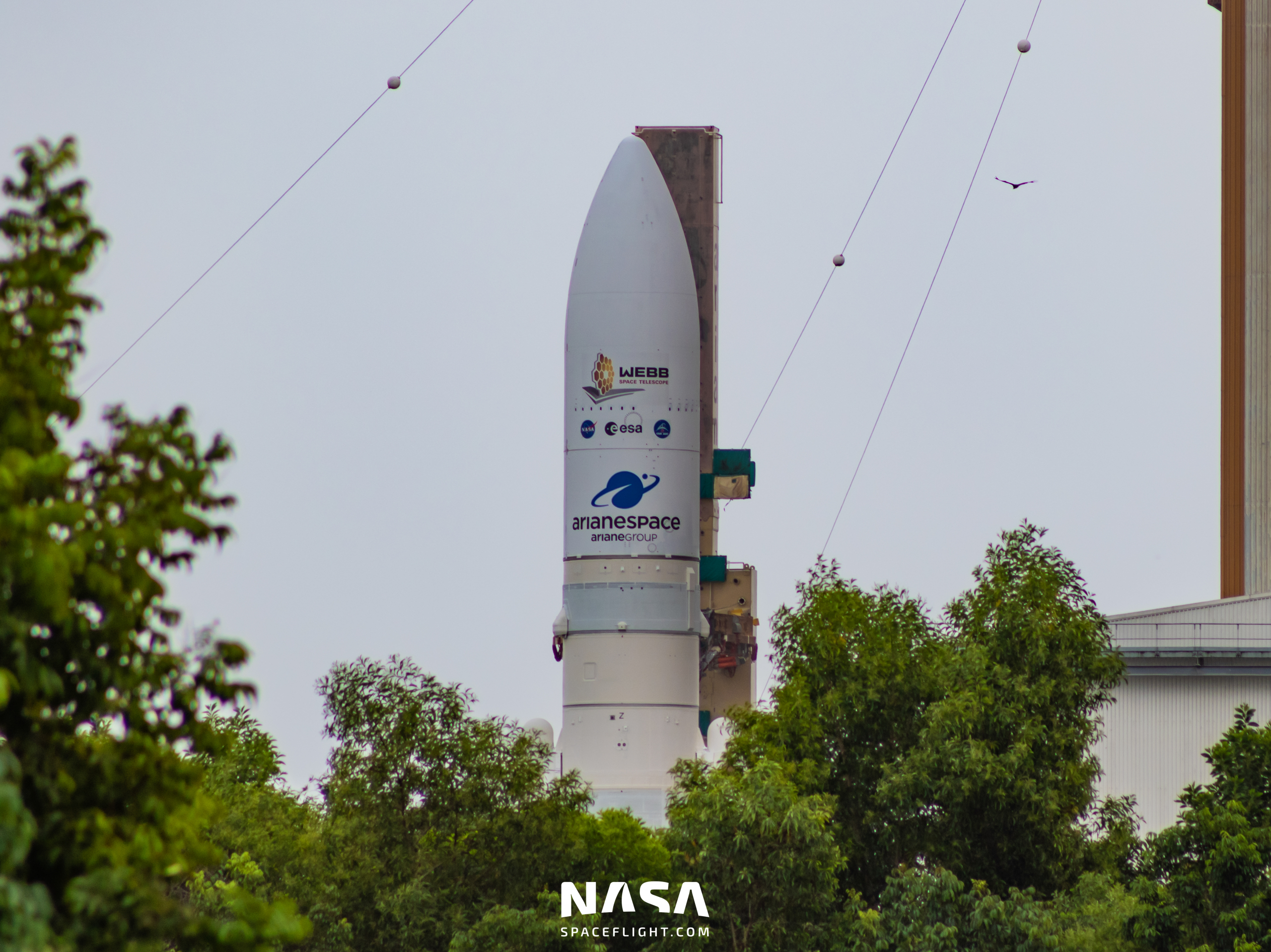 Folding up 344 times to fit inside the payload fairing, James Webb rolls out atop Ariane 5 to launchpad ELA-3 at the Guiana Space Centre in French Guiana. (Credit: Chris Gebhardt (photo) and Nathan Barker (edit) for NSF L2)

With a first-of-its-kind system like the sunshield, extensive testing is part of the requirements of such a critical spacecraft system, and the JWST sunshield was tested extensively on the ground. However, exact deployment conditions cannot be replicated on Earth.

“When we got into the on-orbit deployments having not done a zero-G deployment before, we [really had] a minimum predict and a maximum predict,” related Hillary. “We [were] just hoping to fit somewhere within our predictions, and to see us coming right in dead center as we would hope and expect was a great moment.”

Marc continued, “We were basically characterizing the vehicle since the day of launch and seeing how things behaved and warmed up or cooled down. Some of those things required us to take some different actions, go back to our factory support team and see if we could open up some thresholds on running a motor a little bit warmer than expected.”

“We had to do a couple pitch maneuvers on the vehicle to get into a more favorable attitude so we could get our temperatures where we needed them to be to start the deployment. But we had in our minds that if we needed to take a pause, the vehicle was safe at any point and we could stand down, get a good assessment of the data, and then come up with a path forward.”

“We didn’t feel rushed at any point within ourselves or from the program, which was great. They were all just willing to listen to our recommendations and give us the time we needed to make sure it was safe to do the deployments.”

Following the successful deployment of the mid-booms on December 31, 2021, sunshield tensioning was expected to begin on January 1, 2022. However, this was delayed to January 3 to “learn more about how Webb behaves in space,” per a NASA/ESA/CSA release at the time.