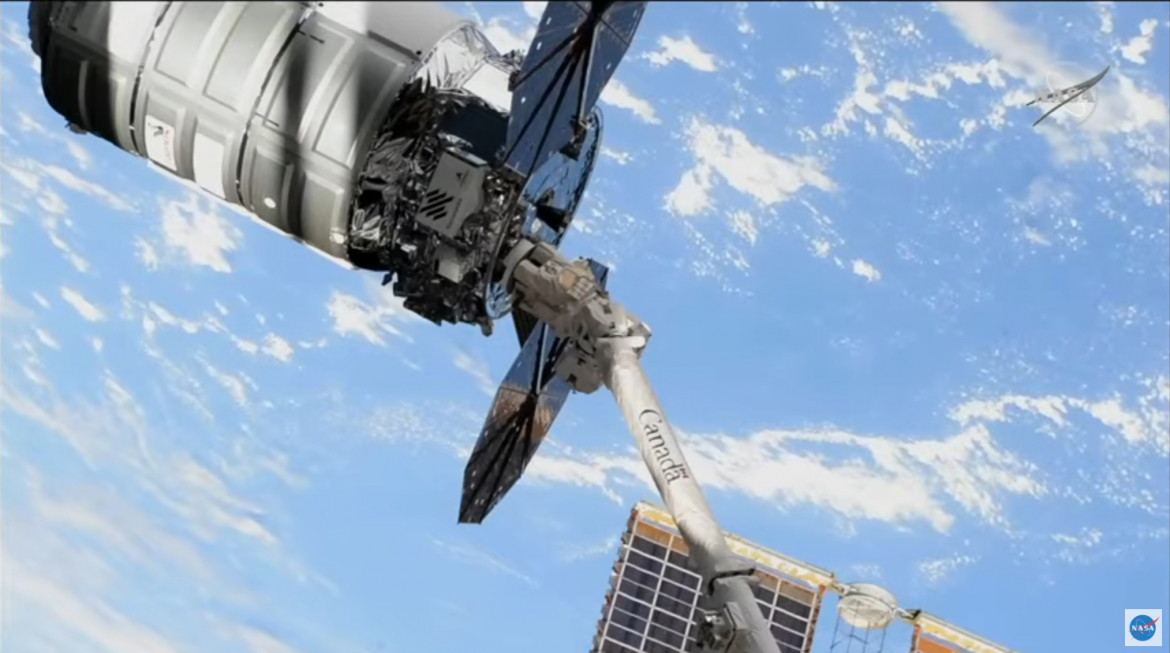 Northrop Grumman’s Cygnus NG-17 spacecraft has arrived at the International Space Station on Monday, less than two days after it launched on the Antares 230+ rocket from Pad 0A at NASA’s Wallops Flight Facility in Virginia.

The Enhanced Cygnus spacecraft on this mission is named the S.S. Piers Sellers, in honor of the former NASA astronaut. Sellers was a veteran of three Space Shuttle missions – STS-112, STS-121, and STS-132 – which were crucial to the assembly of the ISS. NG-17 is Northrop Grumman’s seventeenth commercial resupply mission to the station and the company’s sixth under the CRS phase two (CRS2) contract.

NASASpaceflight’s Chris Gebhardt spoke with Kurt Eberly, Director of Space Launch Programs at Northrop Grumman, about the continuing Antares program, starting with the performance on the company’s previous mission which successfully launched in August 2021.

“Performance to both stages was spot on,” said Eberly. “Put Cygnus right on the money for where they wanted to be. Even a little higher than nominal. So that was all good. And all the telemetry review went well. And really, really good performance on NG-16 back in August. So very unremarkable performance that got us to complete that mission and put Cygnus on a track where they could rendezvous right on schedule.”

Building off of the flight history of previous missions has also enabled performance improvements for cargo deliveries using Antares and Cygnus. This not only will improve Northrop Grumman’s capabilities for upcoming CRS2 missions, but also increase competitiveness with other cargo vehicles such as Dragon and Dream Chaser at a time when new space stations are being actively developed.

“We really made some targeted investments, both to us and Cygnus, to increase our competitiveness for CRS2 and crank up the gain on the amount of cargo we can carry and the services that we provide for CRS2. So that started with the NG-12 mission, and the minimum award under CRS2 was six missions. And this launch coming up on Saturday is the sixth mission, and we have two more the NASA has ordered beyond this one on Saturday.”

“So looking back on that, that increment of performance that we promised to NASA that we’d provide for the CRS2 contract, I think we’ve performed very well in our ability to say we’re gonna upgrade the vehicle, both on the Antares side and the Cygnus side and say in our ability to predict, this is the mass to orbit we’re going to get, this is going to be our ability to provide cargo flexibility in terms of allowing NASA to vary the amount of cargo at the final load and then implementing the 24-hour late load where they can load large amounts of cargo 24 hours before liftoff.”

“All of those key features were spot on for CRS2 and, in fact, I will say that the benefit of those five CRS2 missions that we’ve flown to date is that we’ve got a mountain of flight data to review.” 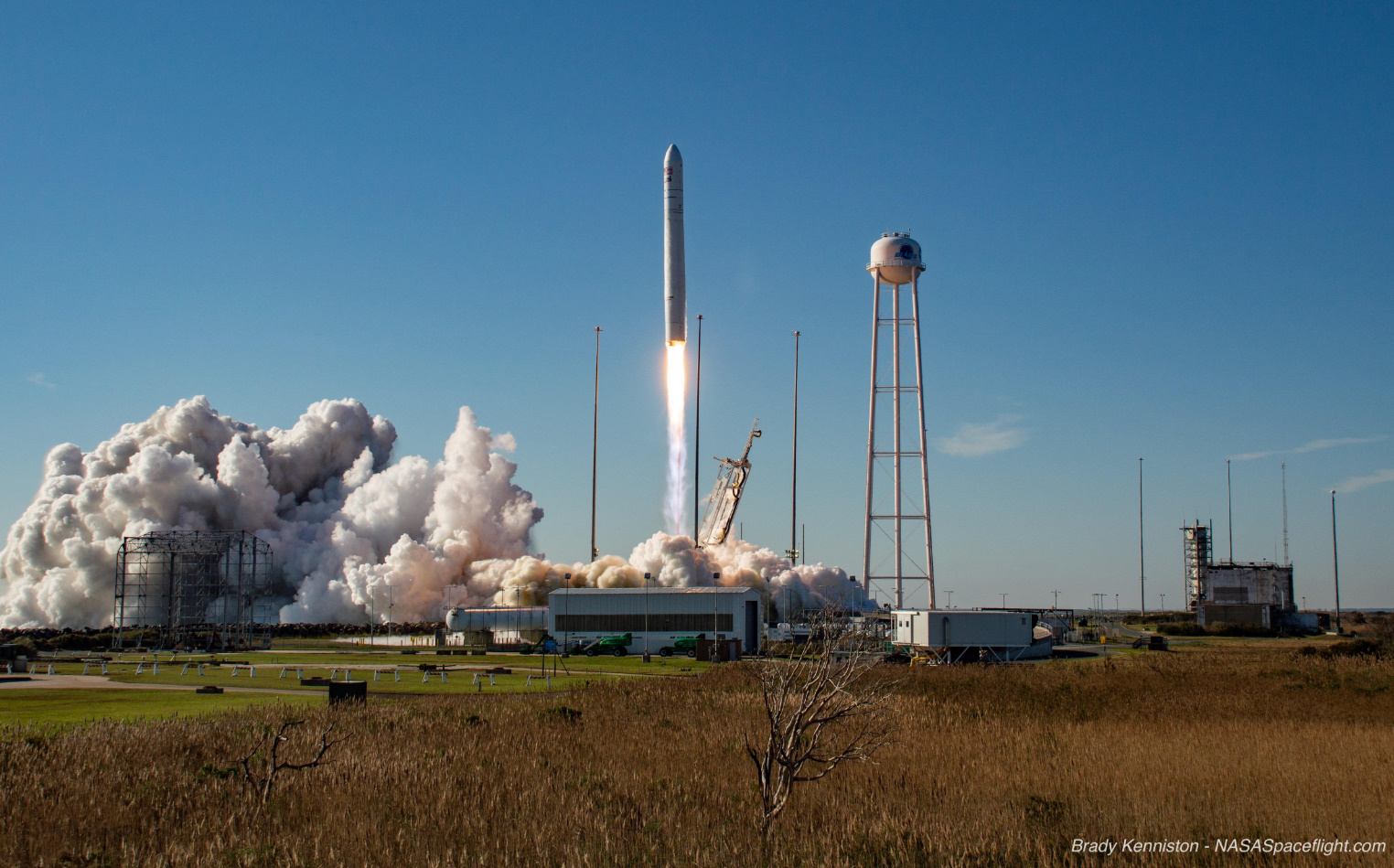 “We’ve even offered NASA a little more cargo for NG-18 and 19. And that’s enabled by increasing the capability of Antares by 70 kilograms. So up through NG-17, 8,050 kilograms is our commitment to Cygnus, and then for NG-18 and 19 we’re going to crank that up by 70 to 8,120 kilograms to the CRS injection orbit, and that’s just a reflection of our ability to take the flight data, reduce it, and update our models in a couple key areas.”

Eberly went on to describe the modeling and testing process that allows the teams to constantly improve their understanding of the Antares launcher’s performance, using flight data from previous missions.

“One of those is the stage two performance model – the solid rocket motor performance model. We’ve been able to make an update and take out some conservatism now that we have this number of flights under our belt, and, basically that was a change to the nominal specific impulse model, a slight increase.”

“Also, our aerodynamic drag model… so that’s something that’s hard to know right off the bat. You know, you can do wind tunnel testing – we do CFD [Computational Fluid Dynamics] to predict what your aerodynamic drag is going to be – but then we painstakingly, through these missions, we back calculate the drag with our GNC [Guidance, Navigation & Control] tools, taking the flight data and then going through a bunch of simulations to figure out what we think the best estimate of the aerodynamic drag is.”

“Going through that on those five missions, we think that we were over predicting a little bit in our models, and so we were able to refine that, and that yielded us a little bit more performance. So those are the kind of updates we do as we fly more and more missions, and that’s how we’ve been able to eek out a little more performance to increase our competitiveness and increase the service that we provide to NASA.”

As Northrop Grumman continues to improve the capabilities of the Antares and Cygnus system, they continue to deliver operational cargo to the ISS. The NG-17 mission is carrying scientific payloads to study cancer, accelerating aging in microgravity, and plant growth on the station.

Are you ready for a #rocket launch?🚀 The upcoming launch of @northropgrumman #CRS17 will deliver groundbreaking #science to the @Space_Station that will help us back here on Earth! #spacebasedresearch pic.twitter.com/99M2Yk0cKy

Also on the payload manifest are a new lithium-ion battery system and new hydrogen sensors for the station’s oxygen generation system. A slew of CubeSats to be deployed from the ISS will also be delivered by Cygnus.

“We started working on the vehicle probably last May/June timeframe. We start with installing the engines onto the thrust frame, down to the back of the core, and then we install feed lines. And then we go through a number of pressure checks where we pressurize the tanks and look for – we have leak tight circuits to the engines – and then all the fill and drain lines that go to the ground. That was in the early Fall timeframe that we got to that kind of testing.”

“The second stage, it arrived in May [2021]. We installed the avionics section to it. The avionics section comes from Chandler, Arizona, and that’s where we make all of our avionics and harnessing. All the avionics and harnessing are pre-installed to that avionics structure which is a composite, tall-sided structure. We truck that out here and then it’s installed in the front of the stage two motor. And then we cable everything up and we start system testing, which occurred starting in October.”

“We run through a number of system tests, making sure everything’s working properly. We also do some interface testing with the range, make sure we can read telemetry to them. And then we have them out for both C-band tracking and UHF FTS [Flight Termination System] testing with their portable assets to make sure that’s all working. That was in the November/December timeframe.”

“We mated the stages right before holiday break, so around the 19th of December.  We assembled the fairing in January and then we lifted and transferred the assembled rocket onto the transporter/erector/launcher, which we brought into the HIF, the Horizontal Integration Facility. And that’s really when we’re ready for Cygnus to arrive.” 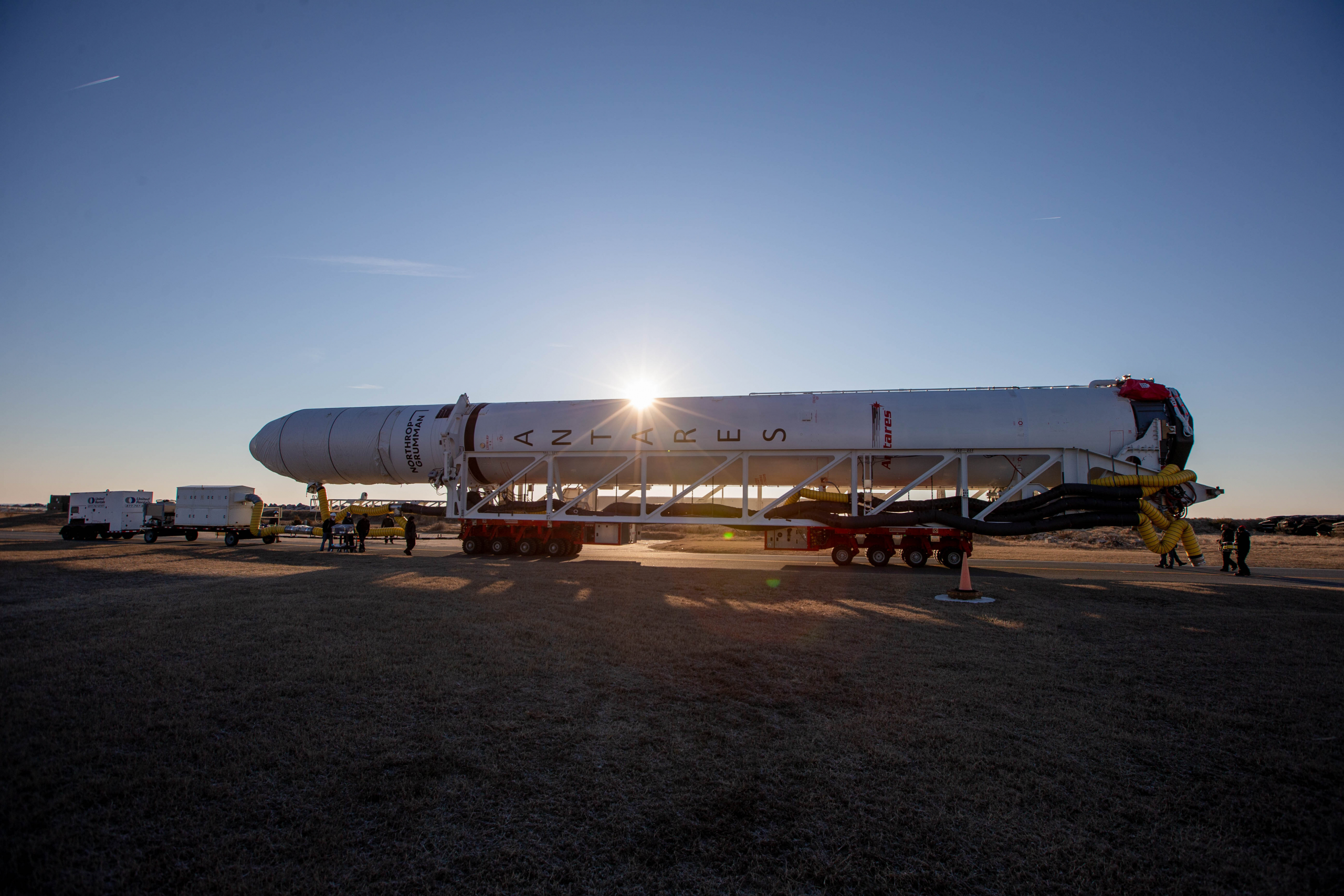 Antares and the S.S. Piers Sellers Cygnus spacecraft roll out to Pad 0A at NASA’s Wallops Flight Facility. (Credit: NASA)

“Cygnus came in vertically after being fueled. That happened towards the end of January. We lifted them up and rotated them over to horizontal, and we put them on a rotating payload mate fixture, and that was early February. That enabled them to rotate things around and they can load cargo to all the different azimuths inside the cargo module. So they can always load down because of gravity here on Earth.”

“After we did the initial load, we don’t need to spin them around any more, so then we mated Cygnus to the front of Antares, we run a final flight simulation – we call it flight simulation number two – and after we trick the rocket into flying a complete flyout ascent with Cygnus powered and participating. Because we have a comm link between Cygnus, we also route telemetry for them down to the ground. And so that was exercised in that flight simulation. We hand them navigation data as we ascend so that way Cygnus has the current state vector in [its] memory banks at the time of separation. And that just helps them to immediately take over control of the mission and do their rendezvous planning.”

After separating from Antares and taking over control of the NG-17 mission, Cygnus completed rendezvous with the International Space Station on Monday, February 21. The Canadarm2 grappled the spacecraft and berth it to the station, where it will provide supplies, science, and storage capacity.

During this stay, Cygnus will also be tasked with a new responsibility for the first time. The S.S. Piers Sellers will conduct a single “re-boost” maneuver to help maintain the station’s altitude, a capability that was tested on the OA-9E mission. This capability is being developed to help reduce the demands on Russian Progress vehicles to re-boost the station.

As is standard for Cygnus missions, the spacecraft will be loaded with waste and safely deorbited at the end of its mission, which is planned to last approximately one month.