Arianespace begins its year with a OneWeb launch 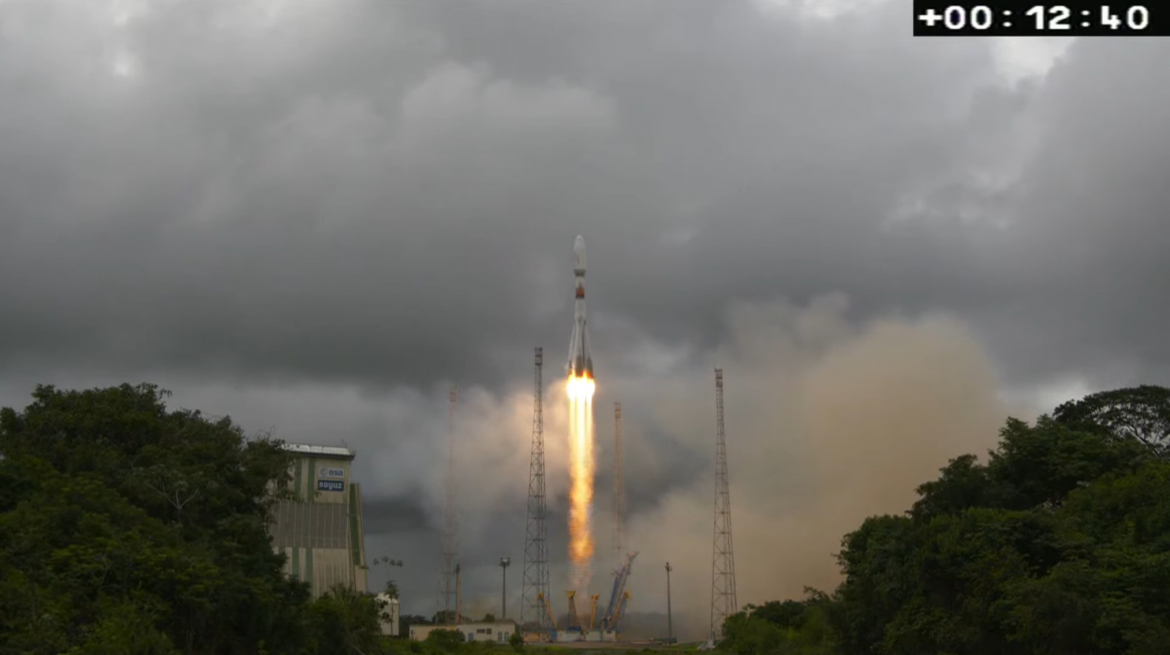 Arianespace has launched its first mission of the year from the Guiana Space Center in Kourou. A Soyuz ST-B rocket is tasked with placing 34 OneWeb satellites in a 475-kilometer orbit around the Earth, following liftoff at 1:09 p.m. EST (18:09 UTC) on February 10, 2022.

Following successful deployment in their parking orbit by the Soyuz, the satellites will use their onboard Xenon Hall Effect thrusters to slowly raise themselves in their respective operational orbit.

This launch marks the 100th satellite launched on Soyuz from French Guiana. The remaining OneWeb launches scheduled for this year are planned to fly from Baikonur Cosmodrome in Kazakhstan.

OneWeb is an internet broadband satellite constellation, primarily owned by the British Government, Eutelsat, and Bharti Enterprises. The company plans to launch 648 satellites as a part of the initial phase of the constellation.

Founded in 2012, OneWeb — originally known as WorldVu — launched its first satellites in February of 2019 from French Guiana. However, due to the effects of COVID-19, the company filed for bankruptcy in March 2020 before being bought by the British Government and Bharti Global. There have been a total of 12 OneWeb launches so far — all using the Russian Soyuz rocket — with a current fleet of 428 satellites in a near-polar orbit around the Earth.

Preparations for the launch began on January 15, 2022, as the specialists at Roscosmos’ Ground-Based Space Infrastructure Facilities Operation and NPO Lavochkin started filling the Soyuz’s additional fourth stage — known as Fregat — with compressed gases. On the same day, 34 OneWeb satellites were delivered to the technical complex at Guiana Space Center.

By February 2, the Soyuz’s three stages had been assembled in the Assembly and Testing Facility. Specialists of Roscosmos’ Progress Rocket and Space Center jointly worked with Arianespace technicians to test out communications and thermostatic control systems, alongside performing electrical and safety equipment checks. Work was also done to get the payload ready for flight.

Technicians installed the OneWeb satellites on RUAG Space’s payload dispenser before installing the stack on the Fregat upper stage. Together, the assembly is called the upper composite. On February 4, the final payload integration work was completed and both the fairing halves were installed on the upper composite to complete what is referred to as the spacehead unit. The fairing protects the payload from the aerodynamic pressure and heating caused by the atmosphere during the launch.

On February 7, the teams at Arianespace and Glavkosmos rolled out the rocket to the launch pad; however, the payload was not mated to the launch vehicle. Pre-launch activities continued as specialists from Roscosmos’ subsidiaries configured pneumatic systems, fueling systems, control, measurement, and temperature control circuits of the rocket, along with  configuring ground support equipment to ensure it is all ready to support the launch.

Once completed, the spacehead unit was rolled down to the launchpad and integrated atop the Soyuz using the mobile service tower. This is one of many differences in pre-launch operations when the Soyuz is launching from the European Spaceport.

The next day, the teams performed further autonomous and comprehensive tests of the launch vehicle and the Fregat upper stage to get ready for launch.

At the T-3 hours and 30 minutes, fueling began on the Soyuz ST-B rocket. The three-stage launch sequence occurred at T-1 hour and 30 minutes. The two green launch gantry towers were lowered in the final 35 minutes of the countdown, revealing the launch vehicle.

Around 16 seconds before liftoff, the final umbilical mast retracted, signaling ignition of the four NPO Energomash’s RD-107A engines on the four side boosters, followed by the single RD-108A engine on the core stage booster.

Once confirmed that each engine was running properly, the engines throttled to full thrust at T-4 seconds. At T-0, the Soyuz ST-B lifted off from the Kourou and rolled to take the payloads to an 87.4-degree inclination.

At T+1 minute and 58 seconds, the four side boosters shut down and separated from the core stage in a formation known as the Korolev Cross. The two aerodynamic payload fairings separated at T+3 minutes and 37 seconds, exposing the 34 OneWeb satellites to space.

The RD-0124 engine on the Soyuz’s third stage ignited while still being connected to the core stage. This is called hot staging. Seconds later, at T+4 minute and 48 seconds, the core stage separated, followed by the jettison of three skirt sections of the engine section.

The third stage completed the ascent to initial orbit insertion, with engine shutting down at around T+9 minutes and 24 seconds. One minute later, the Fregat upper stage separated and ignited its single S5.92 pressure-fed engine, which runs on unsymmetrical dimethylhydrazine and Dinitrogen tetroxide.

Take a look at what is going to happen during flight #VS27 with 34 @OneWeb satellites on #Soyuz at @EuropeSpacePort 🚀 In 2022, OneWeb will continue building its network with the aim of providing global services soon!@OneWebSatellit1 @AirbusSpace @RuagSpace @roscosmos pic.twitter.com/h4KM81XDpW

After its successful burn to a 1200 kilometer orbit around the Earth, the deployment sequence for OneWeb satellites will begin. It consists of over nine separation events, each taking place every 19 minutes to deploy 4 satellites each, except the first sequence which will deploy only 2 satellites. Once the deployment is complete, at T+5 hours and 39 minutes, the Fregat upper stage will relight its engine and perform a burn to lower down its orbit and destructively enter the Earth’s atmosphere, marking the end of the mission.

Recently, the company announced a deal with a maritime satellite communications provider, Marlink. It plans to utilize OneWeb’s satellite internet services to deliver internet connectivity services to business-critical remote operations all over the globe, which includes commercial users both on and offshore. Presently, the companies are targeting the energy sector in the regions above the 50th parallel north, with plans to extend their services to maritime, energy, enterprise, and humanitarian sectors globally by January 2023 by integrating OneWeb’s services into Marlink’s hybrid network.

“We are delighted to be working with OneWeb to deliver a new global, high-speed, low latency connectivity solution that is in strong demand by our remote communication customers across the market segments we serve,” said Alexandre de Luca, President Energy, Enterprise, and Government at Marlink.

Together with OneWeb, we will significantly improve Marlink’s hybrid connectivity solutions for our energy and maritime customers. Adding OneWeb’s capabilities will further enhance our smart hybrid network to support the digitalization of our customers’ remote operations, and in particular to enable our customers’ cloud applications,” said Carole Plessy, OneWeb’s Vice President of Maritime.