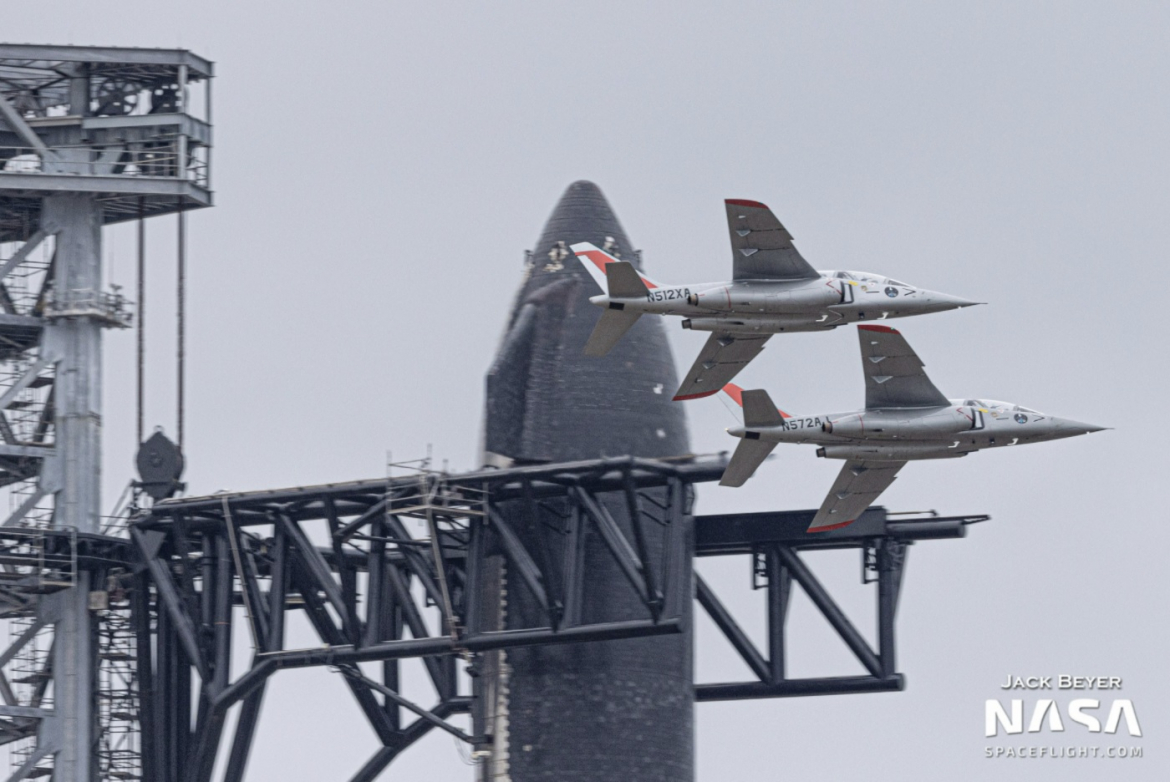 Led by Inspiration4 commander Jared Isaacman, the newly announced Polaris program aims to demonstrate multiple capabilities needed for upcoming Moon and Mars exploration. This rapid advancement of human spaceflight technology is a partnership with SpaceX for up to three crewed missions and will include both the first commercial spacewalk and the first flight of Starship with humans onboard.

The program is named after the constellation of three stars known as the North Star, representing the three planned missions. Across all three flights, new technologies will be demonstrated and scientific research will be conducted. The Polaris team will also continue to promote St. Jude Children’s Research Hospital, building on the over $240 million raised from the Inspiration4 mission in September 2021.

“As we said at the conclusion of Inspiration4, that work was not complete,” said Isaacman. “That mission will always continue until St. Jude’s vision of no child dying in the dawn of life is delivered upon. So I think what we’re trying to do now, in addition to raising funds, is bringing a little more attention, awareness to their global initiative.”

“They’ve taken a lot of the funds that we raised as part of Inspiration4 and put it to the St. Jude global health initiative, and what they’re trying to do is take the protocols for their life-saving treatments, and in conjunction with other non-profits, distribute it across the world. Because right now, the number one factor in childhood cancer survival rates is just simply where you’re born in the world.”

The first mission in the Polaris program, Polaris Dawn, will test Starlink laser-based communications. While this data will be used for future missions to the Moon and Mars, it can also be applied to the St. Jude initiative.

“There are plenty of parts of the world right now that have the same childhood survival rates as what it was in the United States before St. Jude even existed more than 60 years ago. It shouldn’t be that way.”

“If you think about it, some of the elements that we’re incorporating in the mission, like Starlink connectivity, can absolutely be used to connect some of the hardest places of the world to reach. And then through telemedicine, ideally, get help to families that don’t even realize they need the benefit of a St. Jude.”

The crew of four will be lofted into orbit aboard a Falcon 9 rocket launched from LC-39A at the Kennedy Space Center. Initially, Crew Dragon will be inserted into a highly elliptical orbit, with the goal of reaching the highest Earth orbit ever flown.

In order to break the record set by the Gemini XI mission in 1966, Crew Dragon will need to reach an apogee greater than 1,369 kilometers. By flying at this altitude, the crew will pass through the Van Allen radiation belt, enabling research into the effects of space radiation.

After a few elliptical orbits, the Dragon spacecraft will maneuver into a more common low Earth orbit at an altitude of approximately 500 kilometers.

“We’re not planning an expendable booster flight. It should absolutely be recovered. You’re just gonna phase down in altitude. It’ll initially be a highly elliptical orbit, you’ll phase down to about 500 kilometers towards the latter part of the mission, and really what that will do is just set us up well in the event anything unexpected happens during an EVA. You’re gonna want to be in a position to probably come home a little bit quicker.”

Currently, two spacewalks are planned during this phase of the mission. These will be the first commercial spacewalks, and the first demonstration of a SpaceX-designed EVA suit. These suits are upgraded from the current IVA suits used during ascent, rendezvous, and descent on Crew Dragon missions, and will inform the final suit design that can be used on the moon and Mars. 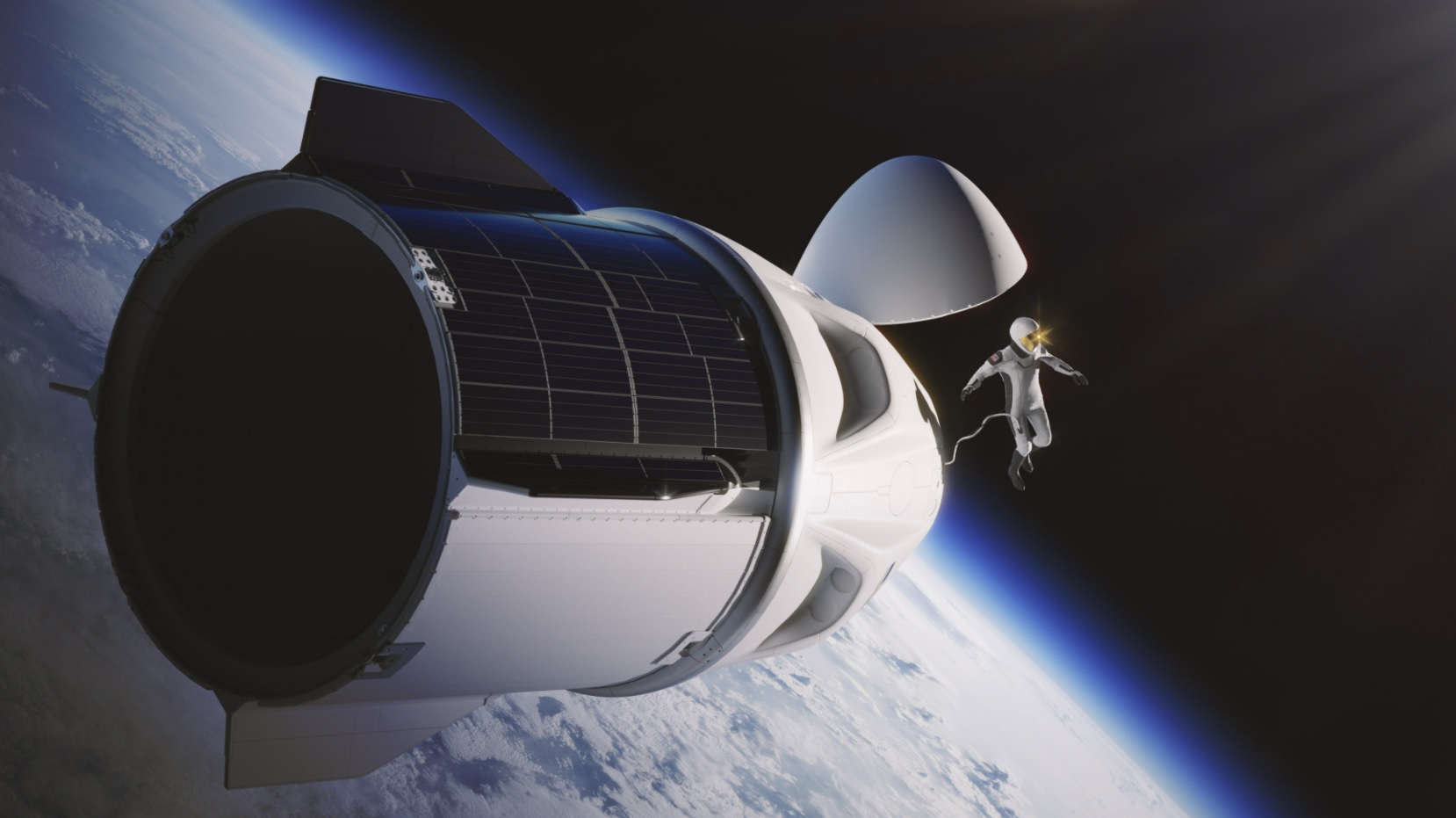 Render of an astronaut conducting a spacewalk from Crew Dragon. The EVA suit appears visually similar to the current IVA suit, other than the addition of a gold visor. (Credit: Polaris Program)

A suite of scientific experiments and technology demonstrations will also be onboard Dragon, with a special focus on human health research. Subjects of interest include decompression sickness, radiation effects, and Spaceflight Associated Neuro-Ocular Syndrome (SANS).

“We probably have three times the number of education institutions we’re working with on this one compared to the one previously, and the benefit there is because we have multiple missions. We’re able to go through a list of various science research, tech demo experiments, and then prioritize which ones we think are best for this mission.”

“For example, given the target apogee, you’re probably going to prioritize for Polaris Dawn a lot more radiation specific research experiments. So we have a number of those already in mind in addition to the biobank data that we were contributing from Inspiration4, that’ll be a component to it.”

Poteet will be taking an active role in medical research on Polaris Dawn. “I gotta earn my keep on this mission, so I’ve volunteered myself to participate. They’re still going through the approval process, regulatory challenges associated with this, but up to this point NASA has done a lot of testing with regard to intracranial pressure (ICP). But it’s mainly been pre and post flight, and mainly non-invasive.” 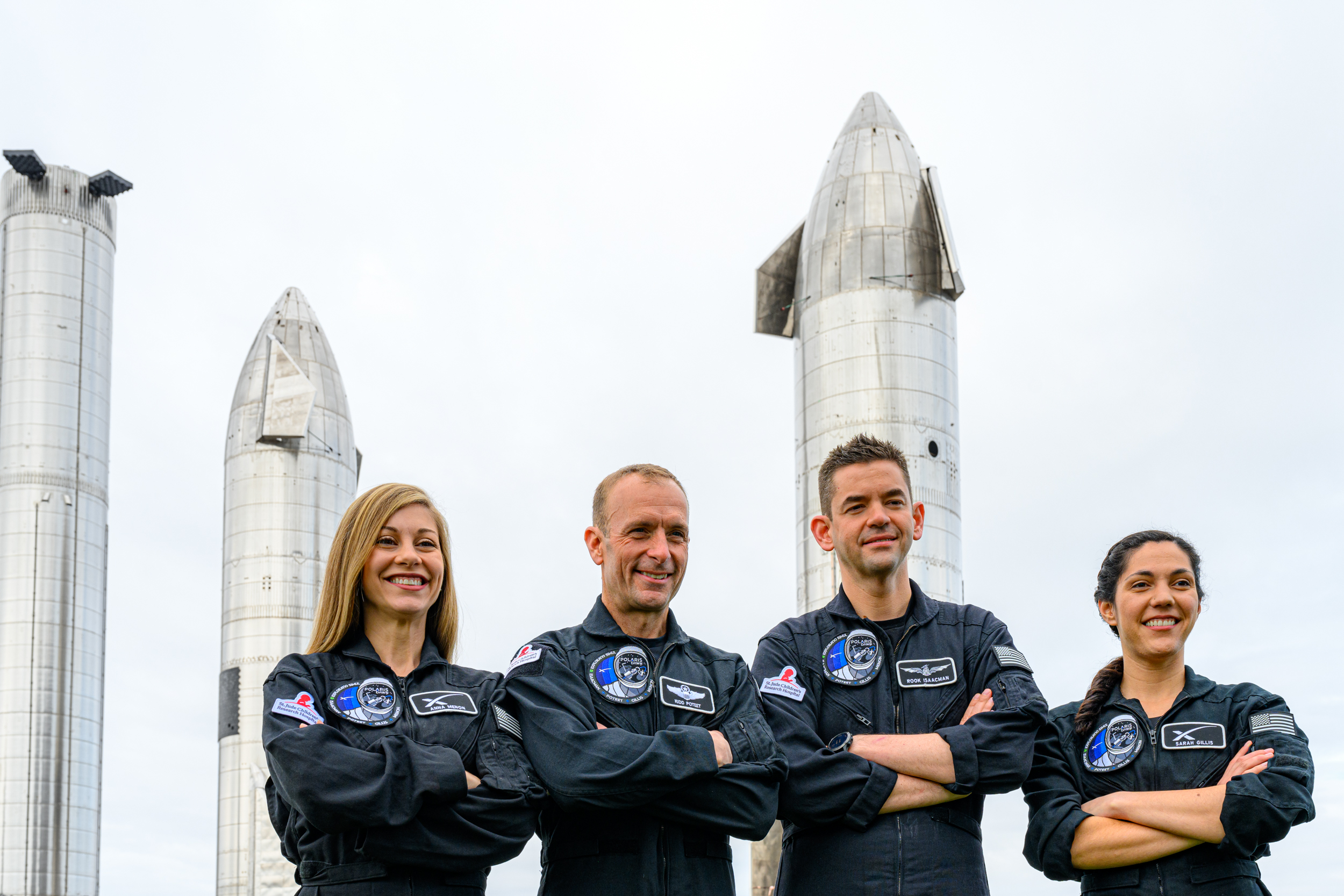 The crew of Polaris Dawn stands in front of the Booster 5, Ship 15, and Ship 16 vehicles in Starbase, Texas. (Credit: Polaris Program/John Kraus)

“What is being discussed now, and working through this experiment, is an invasive ICP experiment where they would surgically implant a transducer below the rib cage with a catheter attached that goes into the spine, which ultimately measures cerebral fluid in the spine, and see the effects of not only pre-flight but during the mission itself as well as post-flight and the impact that micro and zero gravity have on the brain.”

Isaacman joked, “Myself and Sarah and Anna are thrilled that Kidd volunteered this experiment specifically.”

The crew of four is a combination of Inspiration4 members, with Isaacman being that mission’s commander and Poteet serving as the mission director, and two SpaceX engineers who have worked closely with Crew Dragon missions. Isaacman himself is the CEO of Shift4 and an accomplished pilot with over 7,000 flight hours. Poteet is a retired US Air Force Lieutenant Colonel with over 3,200 hours.

Sarah Gillis is a Lead Space Operations Engineer at SpaceX, and trained astronauts for the Demo-2, Crew-1, and Inspiration4 missions. Anna Menon is also a Lead Space Operations Engineer for SpaceX, having served in mission control during the Demo-2 and Crew-1 missions. Menon also previously worked at NASA as a biomedical flight controller for the International Space Station.

Details on the second and third flights of the Polaris program are still being developed, with the only really sure part being that flight three will be the first crewed Starship mission. With the involvement of Starship on these later flights, there will continue to be expanded scientific research capabilities. 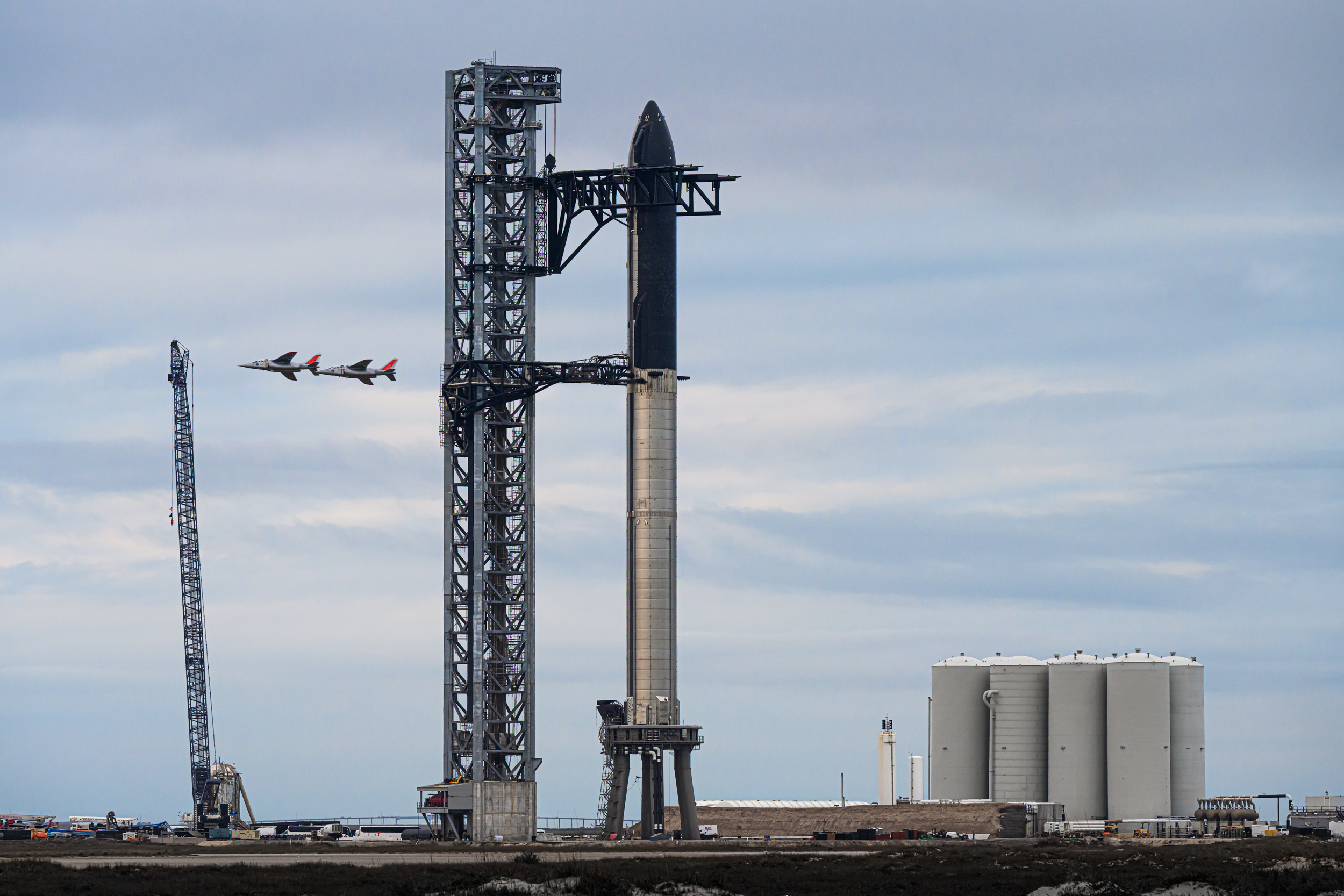 “Obviously, we’re not gonna be as volume limited on Starship as we are on Dragon,” said Isaacman. “So if we’re looking at things that might take up a little bit more space, we’ll probably shift that a little bit to the right.”

“But as we learn from Polaris Dawn and as SpaceX learns from their Starship work in Starbase, ultimately we’re going to combine that information to ultimately inform what the objectives should be for the second mission, which I think generally are all going to revolve around de-risking, ultimately, the first human flight of the Starship.”

“We should be giving every single minute we have on orbit to these causes, and we should be debating like crazy, from a prioritization perspective, if the mission gets cut short, which are the ones we have to get accomplished and then which ones can we shift to the subsequent missions.”

“There’s a significant operational flare to this mission and subsequent missions, and that’s where we want to leverage and benefit our quest for making space exploration more accessible to all.”

(Lead photo: a pair of Alpha Jets owned by Isaacman fly past the Starship 20 vehicle in Starbase, Texas. Credit: Jack Beyer for NSF)