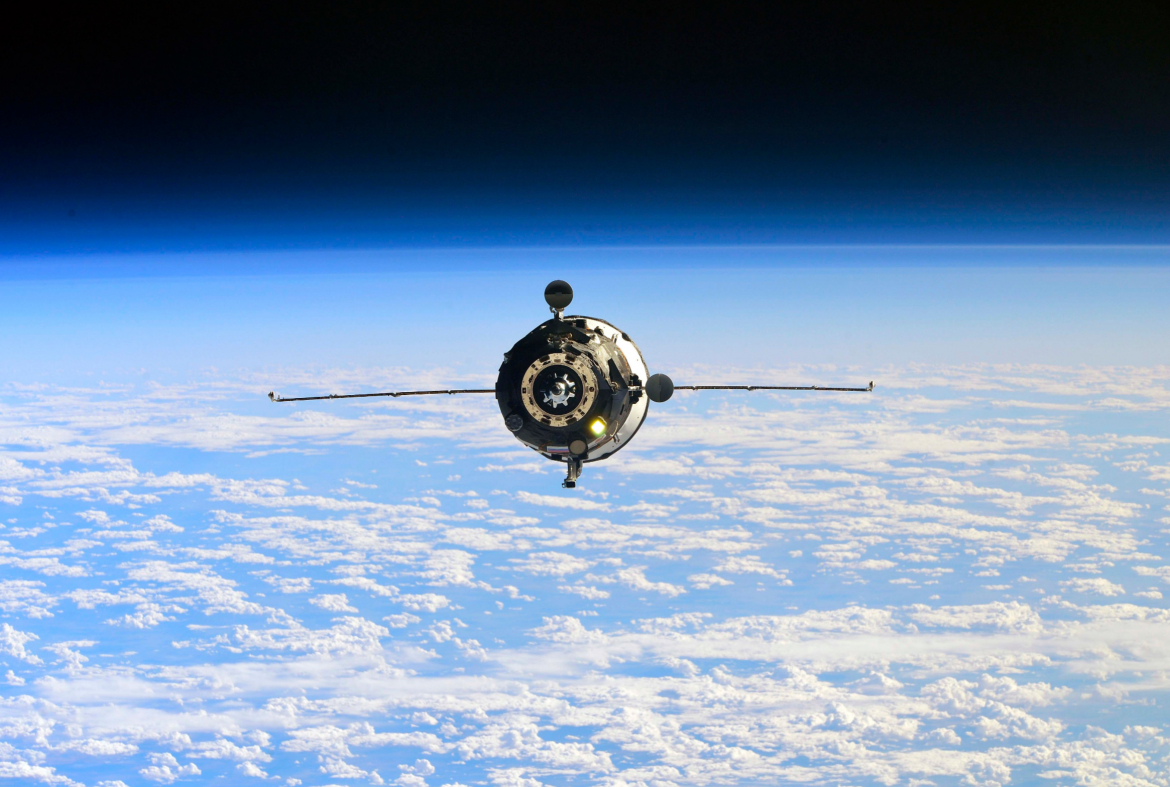 The Progress MS-19 spacecraft – on its 80th cargo resupply mission to the International Space Station (ISS) – docked early on Thursday. Progress MS-19, also known as Progress 80P, launched on a Soyuz 2.1a rocket from Site 31/6 at the Baikonur Cosmodrome in Kazakhstan on February 15 at 9:25 am Baikonur time, or 11:25 pm Eastern time on February 14, before docking with the ISS two days later.

Progress MS-19 marks the 19th mission of the MS variant for the Progress cargo ship, the 3rd launch of a Soyuz rocket in 2022, and the first launch from the Baikonur Cosmodrome this year. This is also the first mission to the ISS of 2022.

Progress is Roscosmos’s cargo resupply ship for the ISS. It has its origins as a cargo ship starting with the Salyut 6 space station in January 1976. Progress’s primary purpose is to deliver fuel, science, and supplies needed for any crew aboard a space station conducting long-duration missions.

The cargo ship is derived from the crewed Soyuz spacecraft but has the main difference of its lack of ability to return to Earth. Similar to the Soyuz at the time, the original Progress vessel did not use solar power but relied on battery power.

Forty-two of the original Progress spacecraft were made before its retirement in 1990. Progress-M was the second generation of Progress spacecraft, which saw its first flight in 1989. This spacecraft received several upgrades, including solar arrays. Progress M used newer systems and was tweaked over its 32 years in service. It was used for Salyut, Mir, and the ISS until it was phased out by the latest generation Progress MS spacecraft. It was used for the final time in 2021 as a propulsion module for the Prichal module. 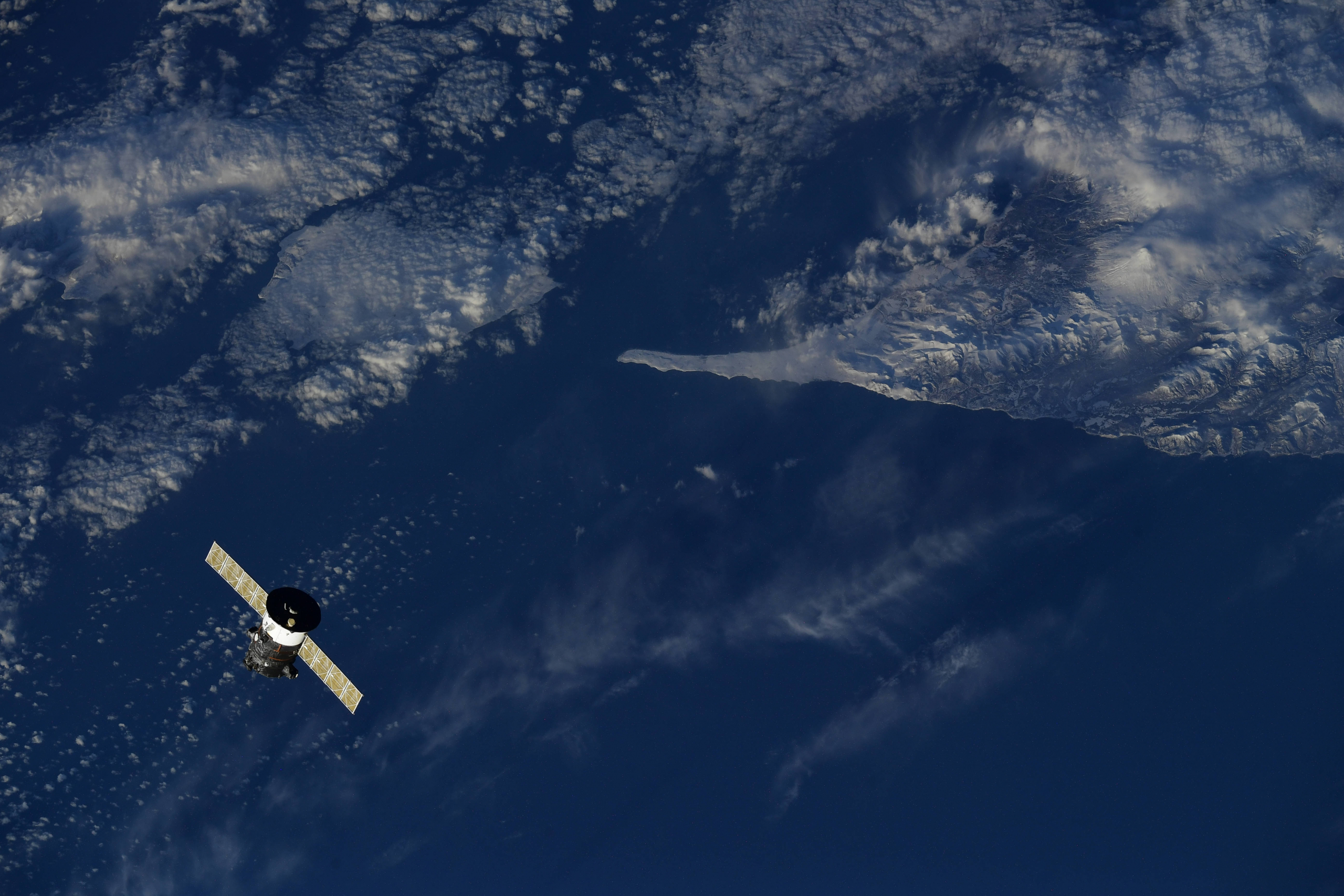 Progress M-UM departs the ISS after the docking of the Prichal Node Module. (Credit: Roscosmos)

Progress MS first launched in December 2015. Since then, Progress MS has been used as a testbed for Roscosmos. Progress MS-09 reached the ISS in a record three hours after launch. With Progress MS-18 and MS-19, new rendezvous techniques will be conducted to lower the time to just a couple of hours.

Due to the rendezvous testing, Progress MS-19 will take the standard two-day rendezvous to reach the ISS.

On Progress MS-14, the spacecraft stayed docked to the station for a record 367 days. Most stay at the orbiting lab for ~190 days. Progress MS-19 will leave the ISS once Roscosmos determines a departure date. The mission is expected to remain in space for a historic ~370 days.

Preparations for the Progress MS-19 mission began in late 2021. The spacecraft, production no. 449 was delivered to Baikonur’s Site 254. Site 254 is a repurposed processing facility for the Energia-Buran vehicle where Progress and both Soyuz rockets and spacecraft are tested. After its delivery, Progress began anechoic chamber testing. Once completed, Progress underwent a five-day leak check while using a vacuum chamber at Site 254. 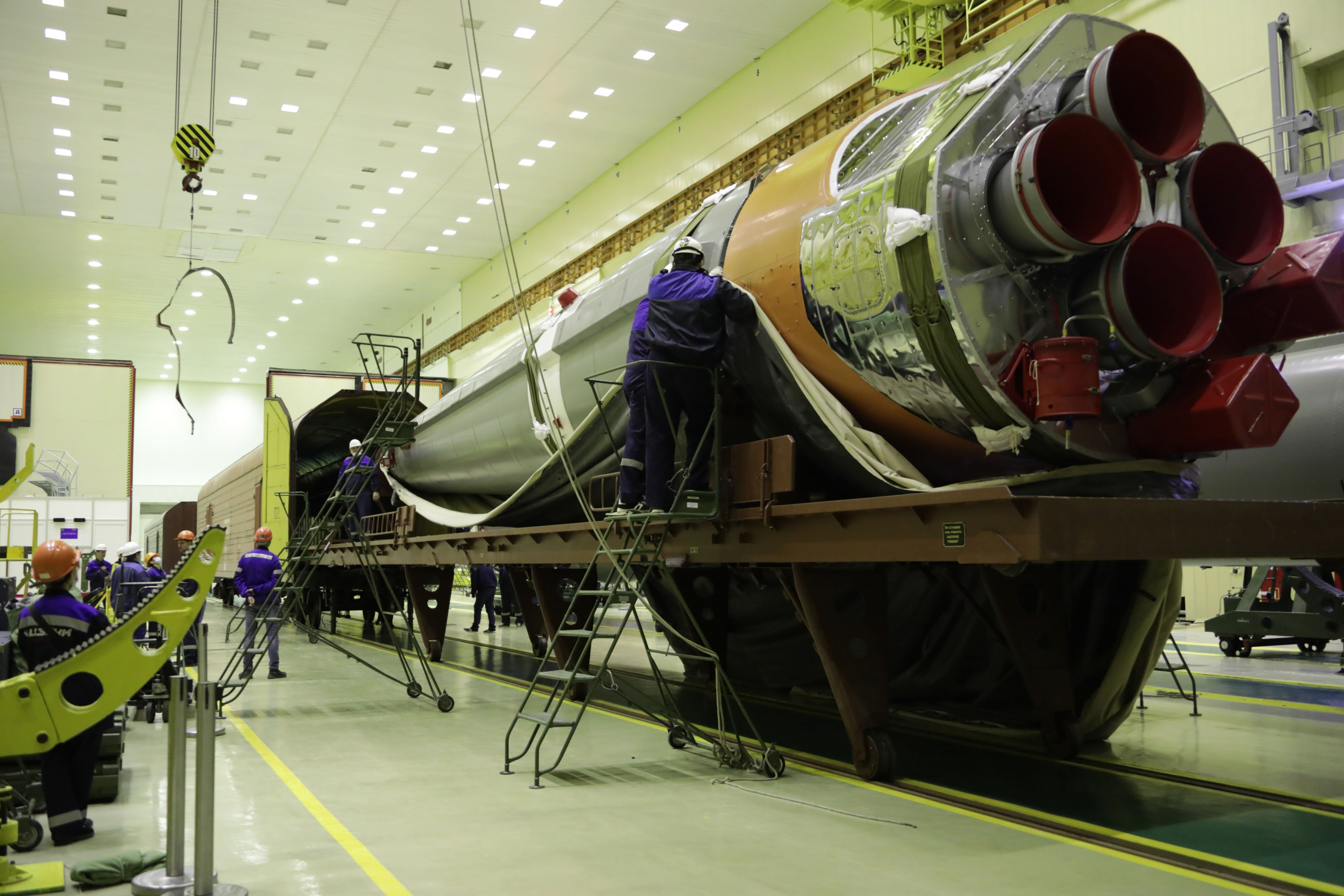 Soyuz-2.1a is a part of Russia’s latest iteration of the R7 family to replace the aging analog Soyuz rockets. The Soyuz-2 family uses updated engines while using a digital guidance computer. Three variants of the Soyuz-2 were created with Soyuz 2.1a and Soyuz 2.1b using the traditional four strap-on boosters with up to four stages.

The core stage, also known as the second stage, is called the Blok-A. Blok-A is a sustainer stage using an RD-108A that is ignited along with the first stage. It burns for 286 seconds and produces 990.2 kN of thrust with a specific impulse of 319 seconds.

Blok-I, the third stage, is the final stage of the Soyuz 2.1a. On Soyuz 2.1a, Blok-I uses the RD-0110, which was the engine used on the Soyuz-U, the most flown rocket in history. It can produce 298 kN of thrust with a specific impulse of 326 seconds and burns for 270 seconds.

General assembly completed ✅
Preparing for rollout, which will take place on Saturday ⭕️

At the #Baikonur Cosmodrome, the Soyuz-2.1a space rocket general assembly has been completed for the upcoming the #ProgressMS19 cargo spacecraft pic.twitter.com/uf9OyNdoMZ

Progress underwent its final major pre-launch testing with its power supply and solar panels. Both were isolated with lights to ensure they could generate power. The completion of the test allowed the filling of its onboard oxygen supply, propellant, and cargo loading.

On Progress MS-19, 1,600kg of both science and cargo is being sent to the ISS. In addition, to support the Russian Segment, a set of cable kits for the Nauka Multi-Purpose Science module, life-support consumables, and repair kits for the Zvezda Service Module launched onboard Progress. Other cargo includes medical, clothing, and food rations for the Expedition 66 crew.

The science on-board is a series of experiments for both long-term and any effects seen in microgravity. Neurolab kits will be used to conduct a series of medical experiments to study the impact of long-term effects of microgravity on Cosmonauts. A bioproby kit will be used to study the effect of microflora on structural material in space to develop methods for spacecraft. Additionally, a biomodul kit will study the capabilities of the production of food and oxygen from photosynthetic microalgae in microgravity. Many other experiments will study the Human immune system, cell culture, and more while in space.

Along with the science and cargo, 430 kg of ISS refueling propellant, 420 kg of water, and 40 kg of pressurized nitrogen was sent to the ISS. In addition, a set of six 3U CubeSat with handles rode with Progress. YUZGUS-55 No. 5-10 developed by Southwest State University will be hand released by Cosmonauts during a future EVA. 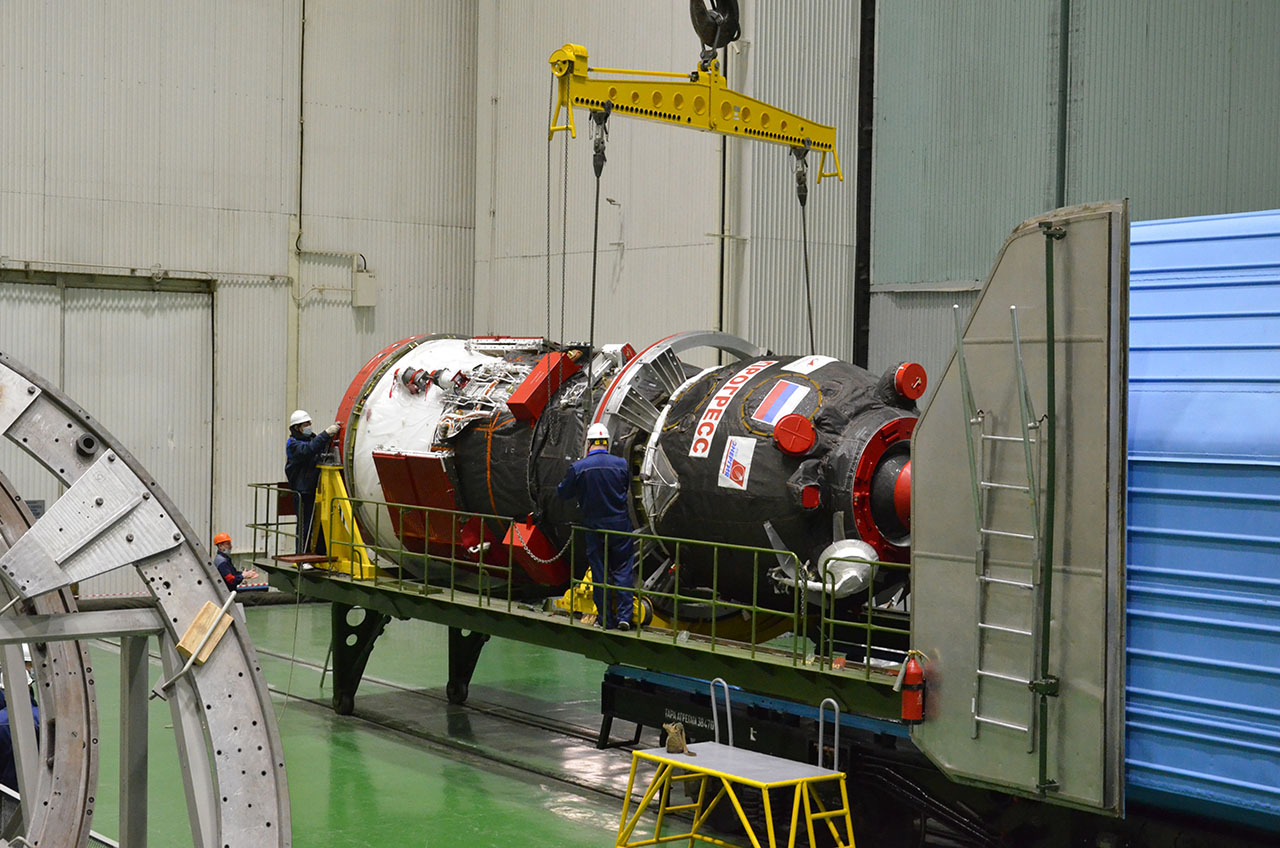 Cargo loading for Progress MS-19 was completed on February 4, 2022. A few days later, the spacecraft was mated to the third stage Blok-I adapter of the Soyuz-2.1a.

Following spacecraft integration, the payload fairing enclosed the Progress spacecraft for launch. This allowed the adapter to be attached to the Soyuz-2.1a’s third stage. Testing was completed to ensure connections from the Soyuz to the Progress were good.

On February 12, all preparations were completed to allow the rollout of the Soyuz to Site 31/6. Shortly after, the “Go” was given to roll out the Soyuz to the launch site.

Site 31/6, also known as Vostok, is Roscosmos’s primary launch site at the Baikonur Cosmodrome. First used in 1961, it is currently used as the launch site for both Progress and Soyuz spacecraft.

Soyuz 2.1a reached the launch site shortly after its rollout. It began to be raised vertically with its service structures to support the Soyuz shortly after. This allowed the teams to begin the L-3 schedule.

On launch day, RP-1/LOX loading began a few hours before launch. The service structures lowered, and the launch key was turned before launch. 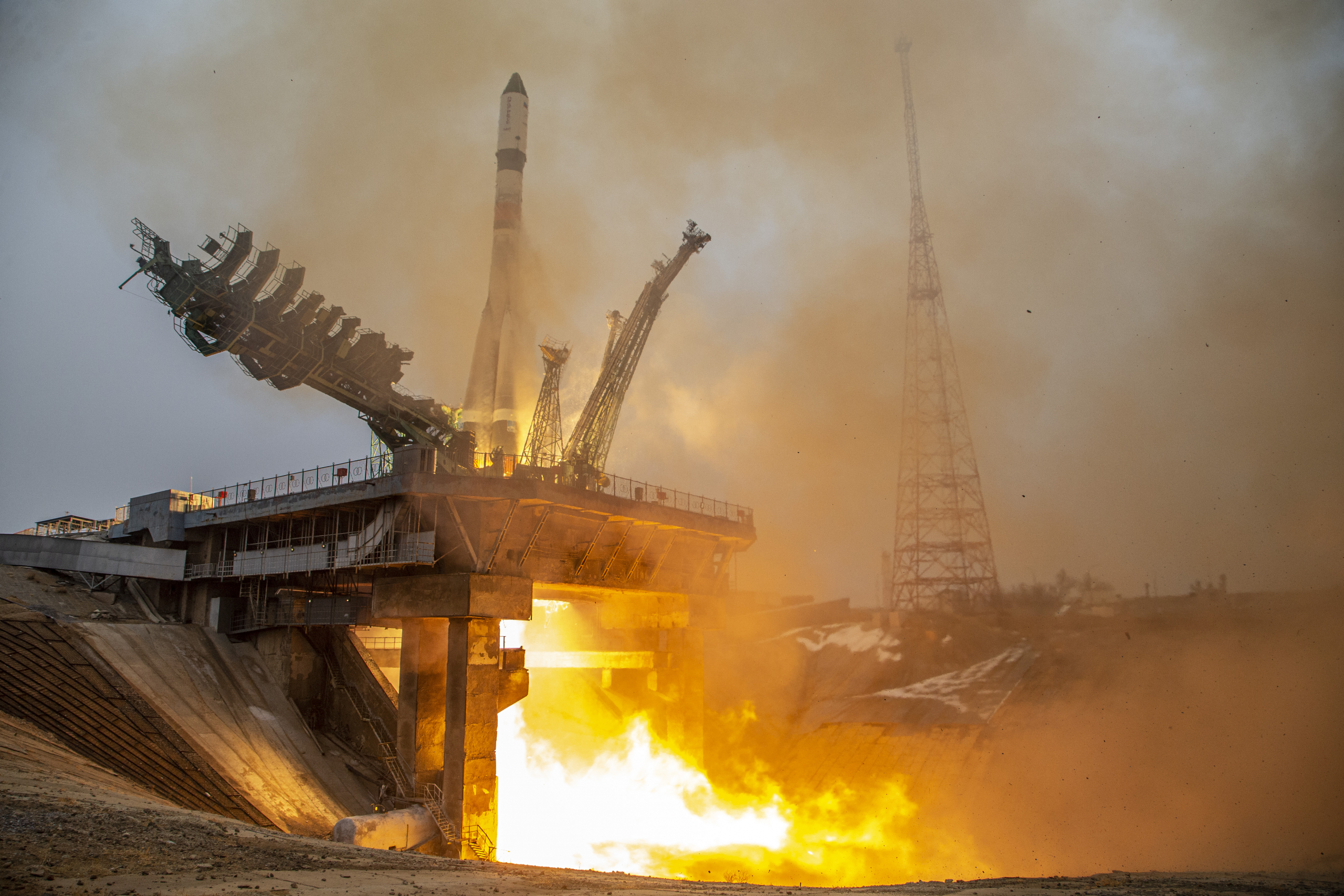 Soyuz began a pitch and roll maneuver following liftoff to reach the proper azimuth to reach the 51.6-degree inclination.

The first stage shut down and separated, following its fuel depletion just under two minutes into the flight. Shortly after, the payload fairing separated, exposing the Progress to space.

The third stage burned until it reaches its nominal orbit. From there, Progress separated and began its antenna and solar array deployments. Progress began orbit raising to reach the ISS following the successful deployment and system tests. 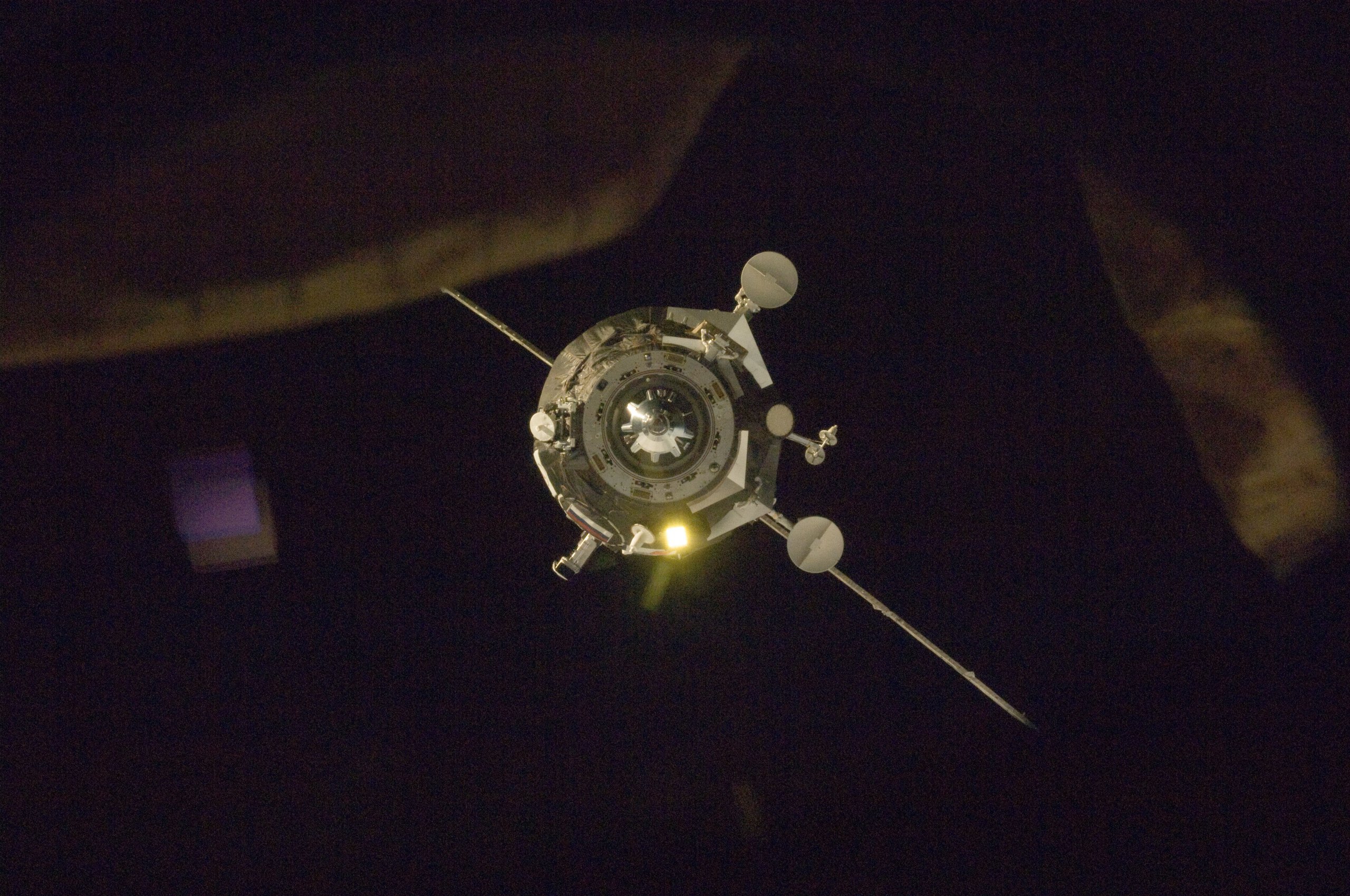 Progress MS-19 is the first of many spacecraft to visit the orbiting lab in Q1 2022. Five days after Progress’s launch, the US Northrop Grumman Cygnus NG-17 spacecraft will launch on an Antares 230+ to the ISS. Cygnus, named S.S Piers Sellers, will launch on February 19 at 12:40 pm EST.

On March 18, at 8:55 pm Baikonur time, Soyuz MS-21 will launch with a crew of three Cosmonauts as a part of the Expedition 66/67 mission. This mission will reach the ISS after six hours and will be the first to dock with the Prichal module.

The final launch of Q1 for the ISS is the Axiom-1 mission. Using the first Crew Dragon to launch three times, Endeavour, Axiom-1 will be the first all-private crew to reach the ISS. Dragon will remain at the station for eight days before returning to Earth. Axiom-1 will launch on top of a flight-proven Falcon 9 on March 30, 2:45 pm EDT.