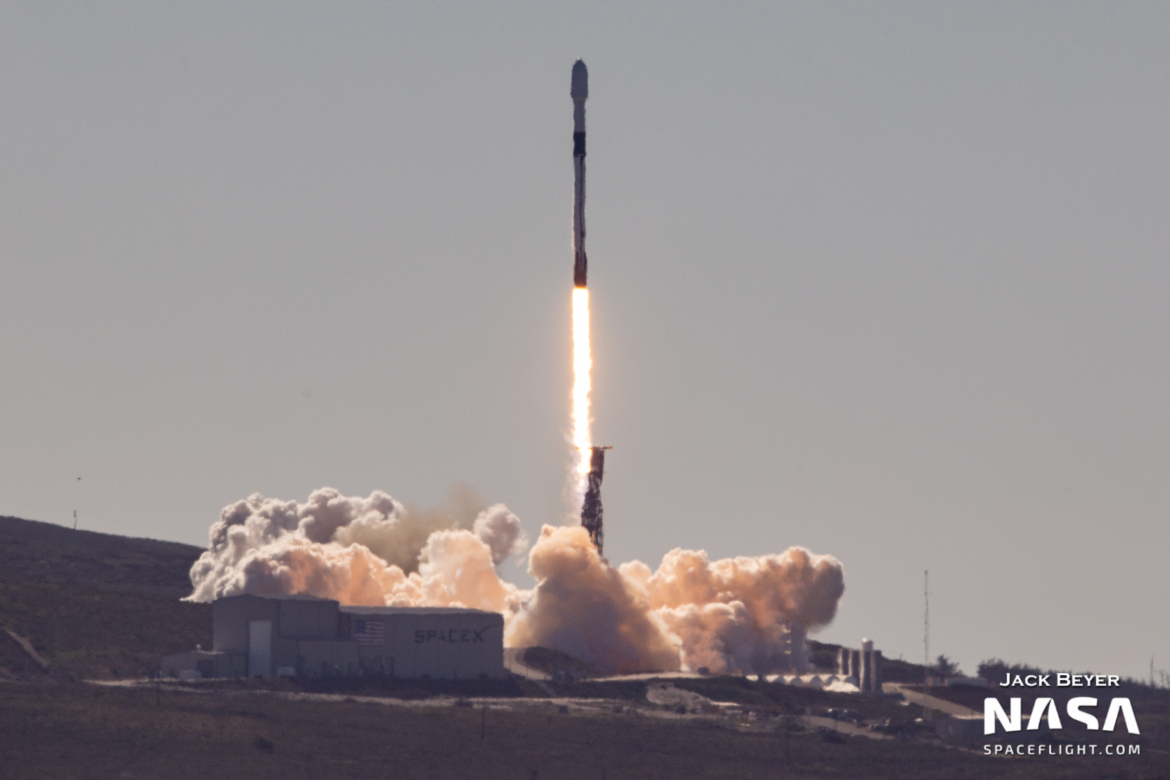 At 12:12pm EST (17:12 UTC), SpaceX launched a Falcon 9 rocket for the Starlink Group 4-11 mission from SLC-4E at Vandenberg Space Force Base in California.

Falcon 9 took a total of 50 Starlink satellites to orbit during the mission. Starlink is SpaceX’s satellite constellation designed to provide broadband internet around the globe.

Each Starlink satellite in the constellation consists of one solar array and maneuvers using hall thrusters.

The first stage of the Falcon 9 rocket landed on the autonomous spaceport drone ship Of Course I Still Love You.

The booster for this mission was be B1063-4, which had flown a total of three previous flights. Starlink Group 4-11 was the fourth mission for this booster.

The first flight for B1063-4 was the launch of Sentinel-6A Michael Freilich on November 21, 2020 from SLC-4E. The booster subsequently landed at LZ-4 (Landing Zone-4) minutes later.

The booster was then used on the Starlink V1 L28 mission, which launched on May 26, 2021. This time, the booster launched from SLC-40 at Cape Canaveral in Florida. It then landed on the drone ship Just Read The Instructions downrange in the Atlantic Ocean.

The most recent launch for B1063-4 before Starlink 4-11 was the launch of NASA’s DART (Double Asteroid Redirection Test) payload from SLC-4E on November 24, 2021. The booster then landed on Of Course I Still Love You in the Pacific.

The launch site:
The launch site for the mission, Space Launch Complex-4E (East), also known as SLC-4E, was originally built as a launch facility for the Atlas-Agena D rocket, and was constructed along the neighboring SLC-4W.

Later on, the launch site was modified for the Titan family of launch vehicles. SLC-4E was the host of Titan IIID, Titan 34D, and Titan IV launches. The final Titan launched in the form of a Titan IV from SLC-4E on October 19, 2005.

The site was then refurbished to be capable of launching Falcon 9 rockets for SpaceX. The company launched their first mission from SLC-4E on September 29, 2013 with Falcon 9 v1.1. Neighboring SLC-4W was demolished by SpaceX and is now Landing Zone-4 .

The most recent launch from SLC-4E was a Falcon 9 on February 2 on the NROL-87 mission for the National Reconnaissance Office.

SpaceX Falcon 9 B1063-4 streaking over Vandenberg SFB in California. Another batch of Starlink satellites launched to orbit.@NASASpaceflight pic.twitter.com/XThnh7P8LL

Launch:
In preparation for the launch, Of Course I Still Love You departed the Port of Long Beach in California on February 22 while under tow by Tug Scorpius. The recovery ships GO Quest and NRC Quest will also be stationed downrange of the launch site. NRC Quest will recover the two payload fairing, while GO Quest will provide support for the drone ship.

NRC Quest was previously used by SpaceX as the Dragon 1 recovery ship on the West Coast.

Prior to launch day, Falcon 9 was rolled out from the Horizontal Integration Facility and erected on the pad. At 35 minutes prior to liftoff, the launch autosequence started. Simultaneously, fueling began on the Falcon 9 starting with RP-1 kerosene on both the first and second stages. At the same time, LOX (Liquid Oxygen) began flowing into the first stage booster.

At around T-4 minutes and 30 seconds, the TE (Transporter Erector) retracted to 77.5 degrees for launch. The TE at SLC-4E has a different design compared to the ones at SpaceX’s other launch sites at SLC-40 and LC-39A in Florida. 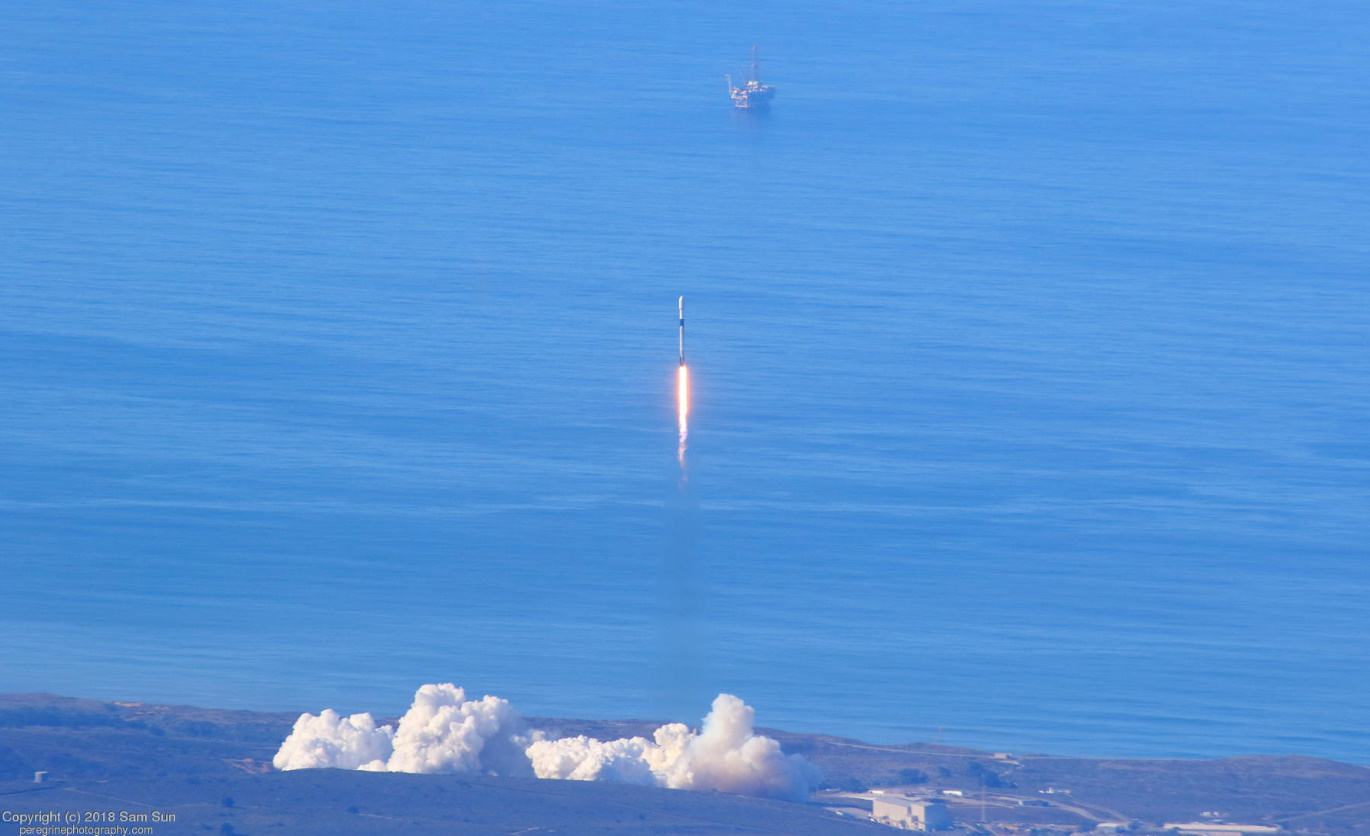 A minute prior to launch, the Falcon 9 entered a milestone known as startup, when the vehicle takes control of the terminal count. At T-3 seconds, the nine Merlin 1D engines ignited.

At T0, the holddown clamps on the launch pad released the Falcon 9, and it began its journey to low Earth orbit.

Around eight minutes 30 seconds after launch, booster B1063 landed on Of Course I Still Love You, situated in the Pacific Ocean. Shorlty after, the Merlin MVac engine shut down, placing the Starlinks into a 53.2 degree orbit.

At T+53 minutes 39 seconds, the second stage will reignite for a single second to place the stack into their final

Around one hour two minutes after launch, the second stage of the Falcon 9 will release the 50 Starlink satellites into their final drop-off orbit at 306 x 316 km. After checkouts by SpaceX, the satellites will individually raise their orbits to join the operational satellites in higher orbits in the Starlink constellation.

(Featured image: A Falcon 9 launches for the NROL-87 mission from SLC-4E on February 2. Credit: Jack Beyer for NSF/L2)