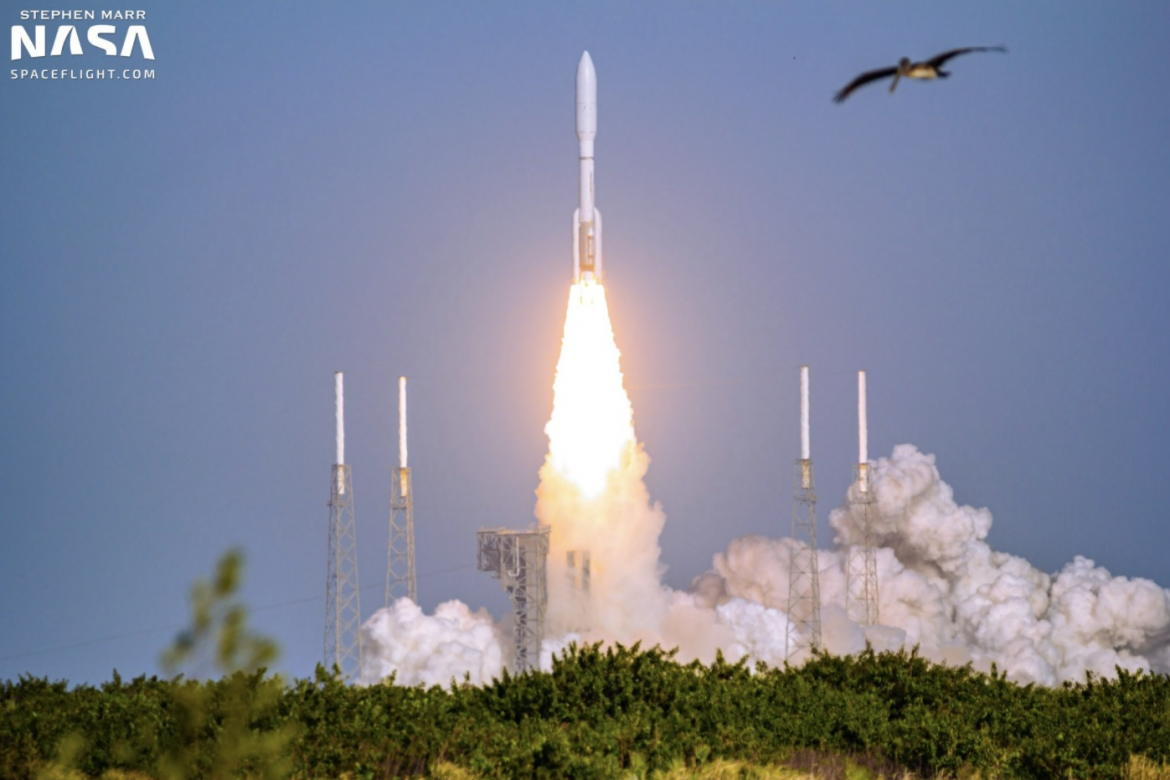 GOES-T is the third satellite in the GOES-R satellite series, the 19th overall GOES satellite, and the second Atlas V launch of 2022. Following the launch, GOES-T will become GOES-18 and will be stationed in the GOES-West position, replacing GOES-17.

The GOES satellite constellation is a NASA and NOAA joint weather constellation providing continuous weather observations of the US and its surrounding areas.

GOES has its roots in the 1960s with the Applications Technology Satellite (ATS) program. ATS was NASA’s program to test satellites in Geostationary orbit (GEO) that could be used to observe the weather. The six satellite program was successful and led to the Synchronous Meteorological Satellite (SMS) Program.

The SMS program was NASA’s operational program to have continuous weather observations of the US. NOAA later became involved with the program, and it was renamed GOES. Since then, NASA and NOAA have continued to work together on the GOES program.

NASA manages the design and construction of both the spacecraft and instruments. NASA also selects the launch vehicle for the GOES spacecraft. NOAA manages the overall program while operating the satellites in orbit.

Despite issues seen with previous satellites while in orbit, the GOES program has successfully allowed for continuous observations for nearly 47 years.

The GOES-R program became operational with the GOES-R satellite, launched in November 2016. The GOES satellites, despite having individual letter and number designations, are also referred to by their program name, which is taken from the first GOES in that new series. For example, GOES-R was the first of the GOES-R program, of which GOES-T is also a part.

GOES-R itself launched on an Atlas V 541 and was successfully placed into a Geostationary Transfer Orbit (GTO).

Following multiple days of maneuvers, it successfully placed itself into GEO, where it was renamed GOES-16. Following its year of on-orbit testing, it was moved to the GOES-East position (an orbital position designation, not a specific satellite) and began its operation.

Its twin, GOES-S, was launched on an Atlas V 541 in March 2018 and successfully made it to GTO. It later moved to GEO where it began its testing. However, in May 2018, its Advanced Baseline Imager’s (ABI’s) cooling system started having performance issues. 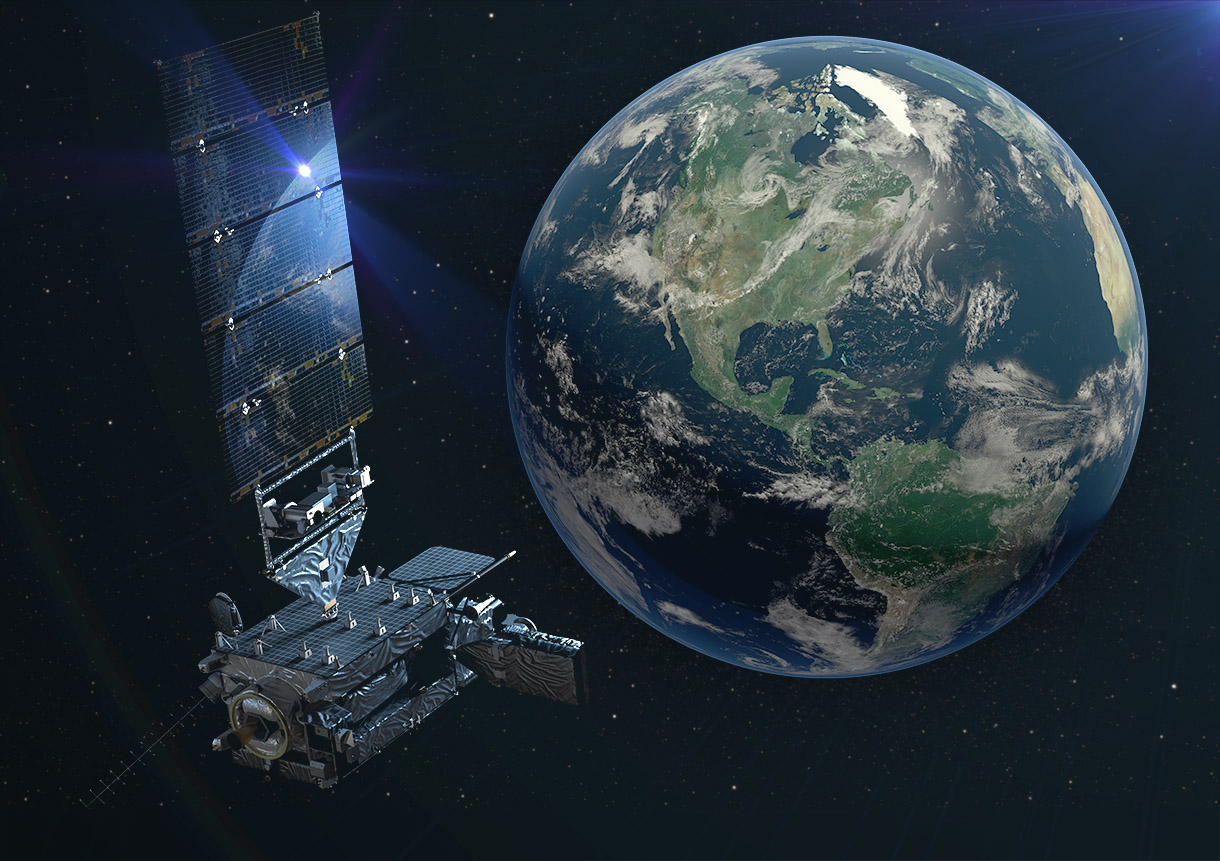 During investigations, NOAA discovered that the ABI heat pipe was not transferring heat correctly to the satellite’s radiators due to a blockage in the pipes causing a restricted flow of coolant to the ABI and thus causing it to overheat. NOAA adjusted the instrument’s operations and conducted more testing, leading to a new cooling timeline.

L3Harris, the manufacturer of the ABI, redesigned the instrument for the GOES-T and GOES-U satellites. The new design uses less complicated hardware configurations that eliminate the filters that are susceptible to debris.

Software updates have been sent to GOES-17 to help fix the issues with the ABI. Currently, GOES-14 and GOES-15 are being used as backups for GOES-16 and 17. The fates of GOES-14/15 after GOES-T enters service have yet to be determined.

For the whole GOES-R program, the ABI is the primary instrument for imaging Earth. The performance issues on GOES-S, now named GOES-17, did not impede its entering service. However, the GOES-T satellite was delayed for over a year to fix the issues with the ABI instrument.

GOES-T is the latest satellite in the GOES-R program. Like the other three in the series, the satellite is based on the Lockheed Martin A2100 satellite bus. The A2100 is Lockheed Martin’s offering for medium Earth orbit and GEO satellites. Since its introduction, the A2100 has been used for both military and commercial missions.

Taking GOES-T from its initial concept to launch was a highly coordinated and collaborative effort between @NOAA, @NASA, @LockheedMartin, @L3HarrisTech, and @ULAlaunch.

For the GOES-R program, the satellites have a dry mass of 2,857 kg. Fully fueled, each masses 5,192 kg and will have a lifetime of around 15 years.

Following the ABI redesign, the GOES-T satellite bus was completed in August 2020. Like the other A2100 satellites, GOES-T was produced and tested at the Lockheed Martin Waterton Facility in Colorado.

Pre-flight testing included thermal vacuum, acoustic/vibration, and electromagnetic examinations. These tests are used to see if the satellite can survive the harsh environments of both launch and space.

GOES-T began final preparations for launch in October 2021 when Lockheed Martin completed the Pre-Shipment and Operational readiness reviews. A month later, on November 10, GOES-T was moved from Waterton to the Buckley Space Force Base in Aurora, Colorado.

At Buckley, it was loaded onto a C-5 Super Galaxy aircraft where it was delivered to Kennedy Space Center. From Kennedy, it was moved to the Astrotech Space Operations processing facility. Here it was placed into temporary storage before continuing launch preparations.

While at Astrotech, the spacecraft underwent propellant loading for its LEROS-1c engine. The satellite was then moved into the encapsulation bay to be placed inside the Atlas V’s 5.4-meter diameter payload fairing. 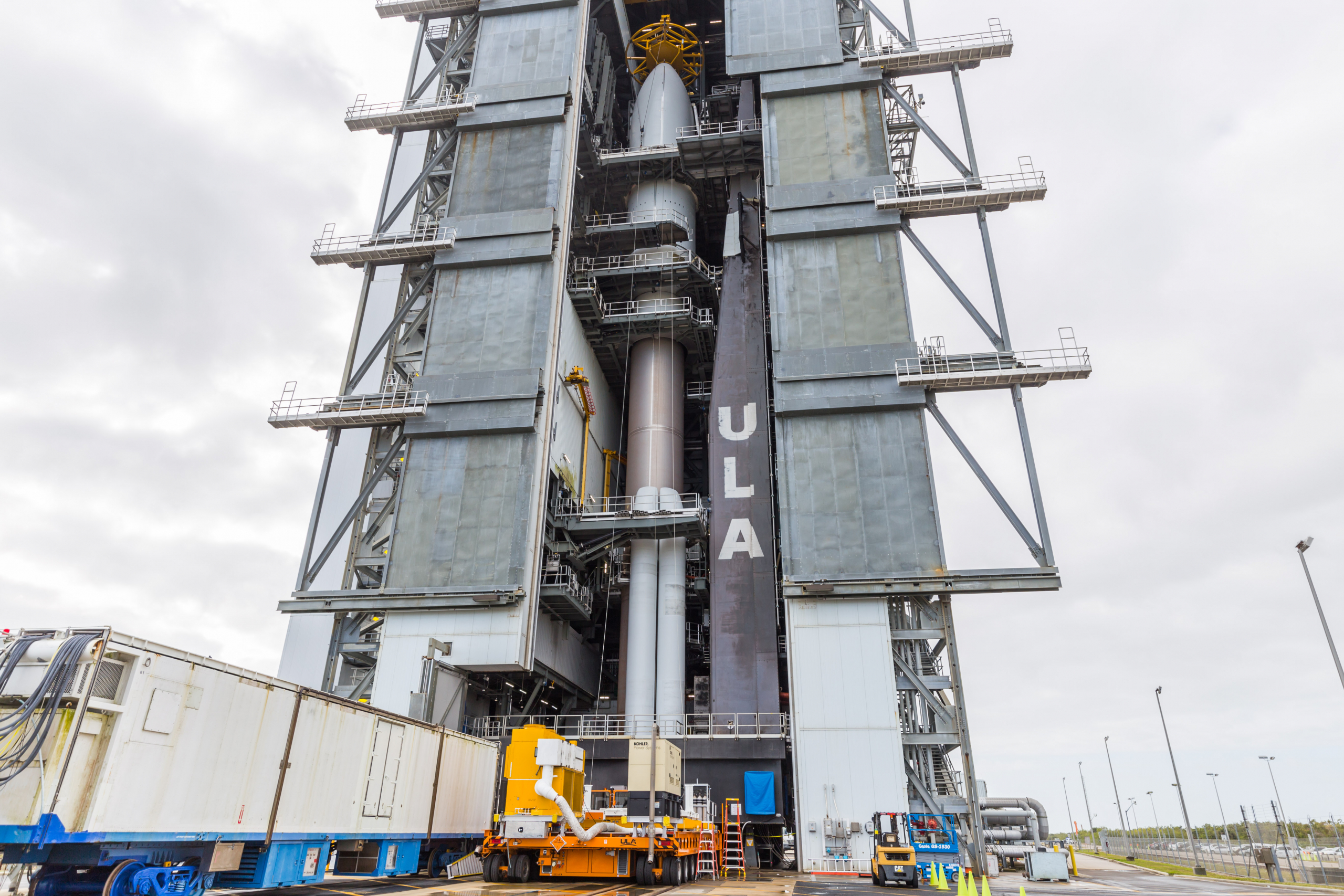 With the encapsulation complete, the payload was moved to the pad at SLC-41 where Atlas V had been stacked.

The Atlas V rocket is ULA’s workhorse rocket. First launched in August 2002 on the Hotbird-6 telecommunication mission, Atlas V has since launched 90 times, with a nearly spotless record. After GOES-T, there are 24 remaining Atlas V launches before its retirement in favor of the upcoming Vulcan rocket.

The Atlas V used for this mission is designated AV-095.

Atlas V is a two-stage liquid-fueled rocket. The first stage booster is a single-engine stage utilizing a Russian-built RD-180 engine. The RD-180 generates 3,828 kN of thrust with a specific impulse of 337 seconds. This stage is 32.5 meters in length, 3.81 meters in diameter, uses RP-1/LOX, and burns for about four minutes.

For the initial part of the flight, the first stage can support up to five GEM-63 solid rocket boosters. These boosters, first introduced on the NROL-101 mission in November 2020, are manufactured by Northrop Grumman and are smaller versions of the GEM-63XL boosters set to launch on Vulcan.

Each booster generates 1,652 kN and burns for about 94 seconds. This mission will use four boosters.