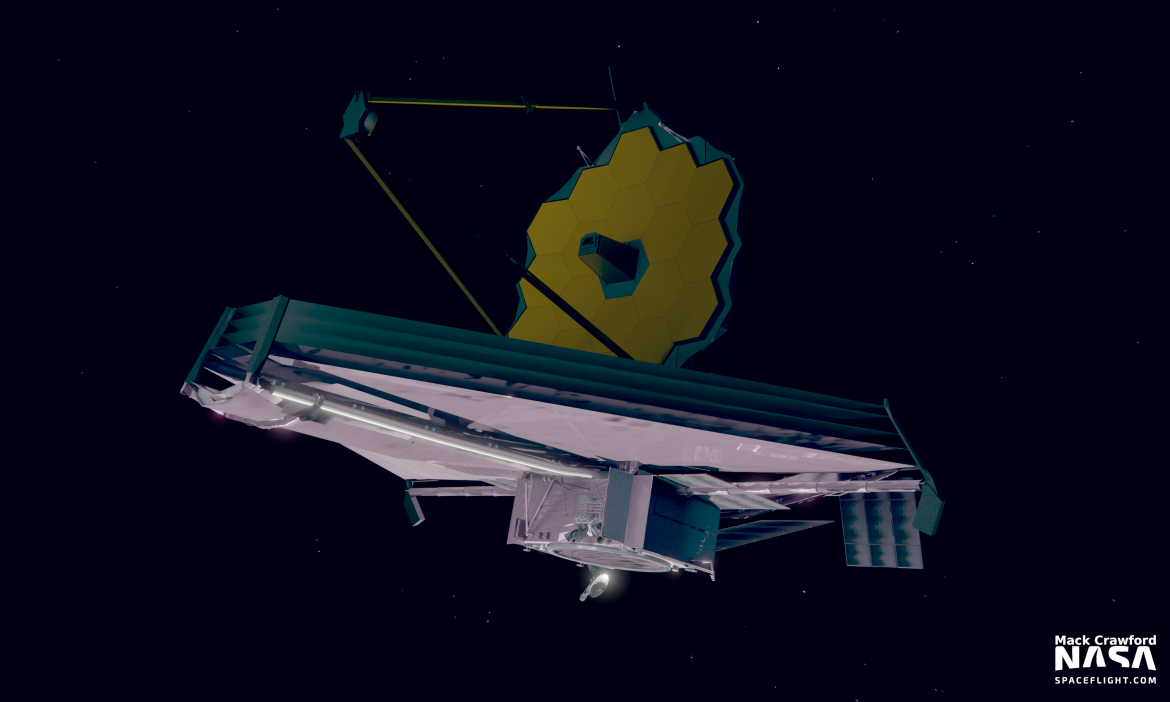 Following a historic launch in December 2021 and an incredible arrival at Lagrange Point 2 (L2) in January, James Webb Space Telescope teams have been hard at work preparing the telescope for its first observations this summer. On March 16, NASA announced that one of the most critical steps in the commissioning process had been completed — the alignment of all 18 individual mirrors on James Webb’s primary mirror.

“We have fully aligned and focused the telescope on a star, and the performance is beating specifications. We are excited about what this means for science. We now know we have built the right telescope,” said Ritva Keski-Kuha, James Webb’s deputy optical telescope element manager at NASA’s Goddard Space Flight Center.

Due to the immense size of James Webb’s mirror, it could not be flown into space fully deployed. In order to fit inside the fairing of an Ariane 5 rocket, the mirror had to be folded inwards on the port and starboard side of the observatory, creating “wings.” Once in space and en route to L2, James Webb teams successfully unfolded these “wings,” bringing the iconic primary mirror to its final form.

James Webb’s primary mirror is comprised of 18 individual hexagonal mirror segments, each covered in beryllium and gold. Each mirror segment is attached to a small motor, allowing optics teams to slightly move each mirror in nanometer increments to precisely align and “focus” the entire primary mirror.

This fine process of moving each mirror segment to align the primary mirror is what James Webb’s optics teams have been working on throughout the commissioning process thus far.

On March 11, the optics teams successfully completed one of the last procedures required for alignment. This step is called “fine phasing.” With fine phasing completed, every optical system on James Webb that has been tested and checked should be operating at or above their expectations. Fortunately, the optics team found no major issues with the mirror and confirmed that there was no contamination or blockages in any of the observatory’s optical systems.

With fine phasing completed and the primary mirror aligned, the team took an image of the star 2MASS J17554042+6551277 using the NIRCam (Near-Infrared Camera) instrument and a red filter to optimize visual contrast. The purpose of the image is to confirm that the light collected by the mirror is being transferred to the observatory’s instruments correctly. 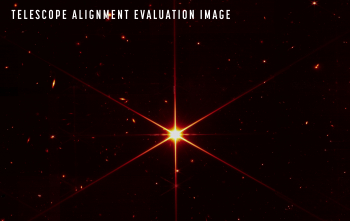 Once each mirror was aligned with the star, the optics teams focused the star in each mirror using the secondary mirror, located at the end of the Secondary Mirror Support Structure (SMSS) tripod. After focusing the mirror segments, each segment’s image was stacked on top of each other, creating an image of just a single star.

After the stacking of the images was complete in late February, teams worked to fine-tune the image and make it progressively sharper. Once complete, the aforementioned final phasing process took place.

Though the mirror and instruments are fully aligned, multiple steps still need to be completed before all of James Webb’s optical systems are fully operational. These final steps are set to be completed over the next six weeks and will consist of optics teams working to align the observatory with the NIRSpec (Near-Infrared Spectrograph), MIRI (Mid-Infrared Instrument), and the FGS/NIRISS (Fine Guidance Sensor/Near InfraRed Imager and Slitless Spectrograph) instruments. Currently, Webb is only aligned with the NIRCam (Near-Infrared Camera) instrument.

A special lens inside the NIRCam instrument took a "selfie" of Webb's mirror segments, verifying their alignment with NIRCam. The segments are bright as they are all collecting light from the same star in unison. https://t.co/RPL4OItJNA #UnfoldTheUniverse pic.twitter.com/jSrupf7i4a

During the time the observatory is being aligned with other instruments, teams will be evaluating the performance of each instrument, which will then allow instrument and optics teams to decide on final corrections that need to be done before completing the mirror alignment process. The final step in the alignment process will occur following the corrections made to instruments, wherein Webb teams will adjust any errors in the positioning of the mirrors.

Currently, James Webb teams are on track to conclude the mirror alignment process in early May, if not sooner. Once mirror alignment is complete, instrument teams will then take two months to prepare their respective instruments for science operations, which are set to begin this summer.

All four of James Webb’s instruments were successfully powered on in late January, and have been undergoing checks and tests by instrument teams to confirm that they are working properly at L2 following launch.