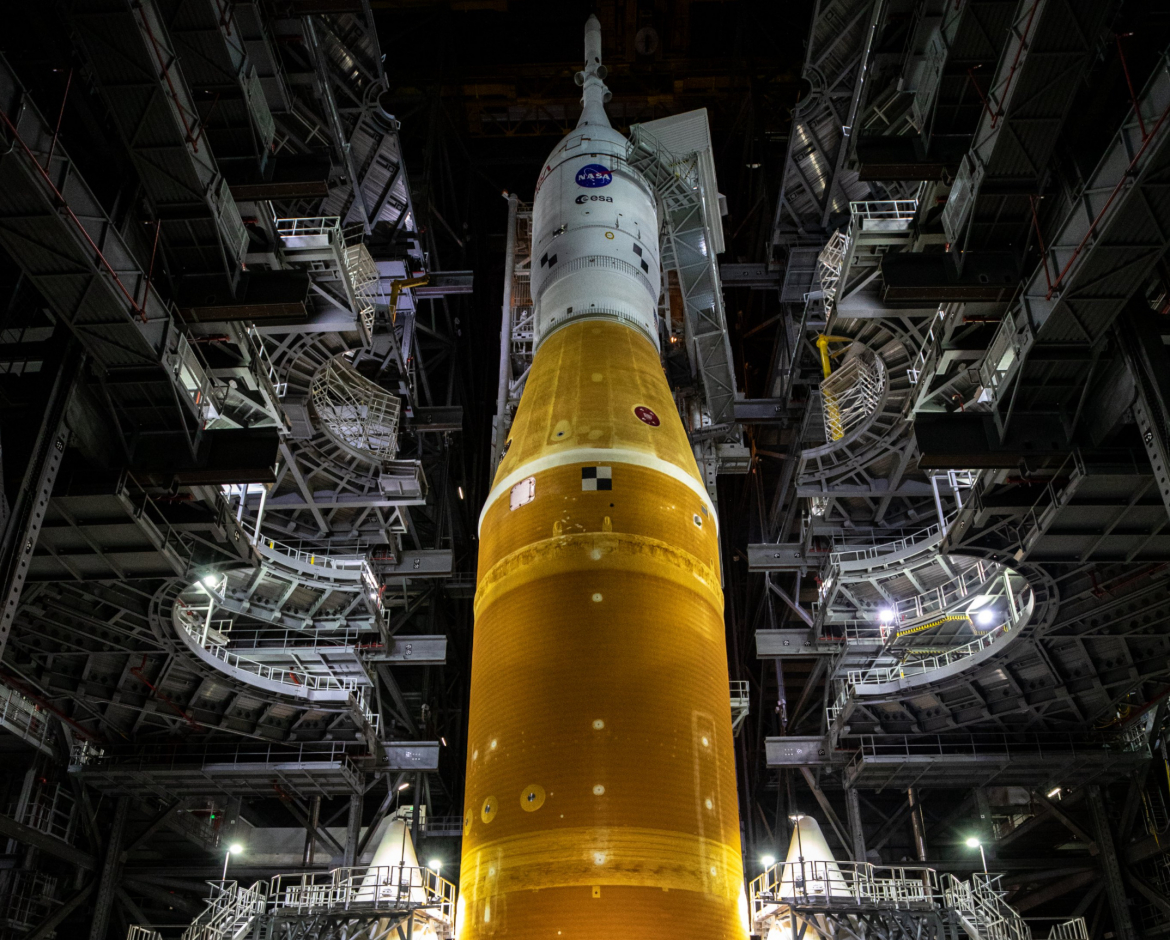 Years and billions of dollars in the making, the first Space Launch System (SLS) rocket is set to roll out to Pad 39B for Wet Dress Rehearsal (WDR) next week. While this rocket is set to launch the Artemis-1 mission, three additional SLS rockets are in various stages of preparation at the Michoud Assembly Facility (MAF), setting the stage for the return of humans to the surface of the Moon.

Since the Core Stage arrived from the Stennis Space Center on the Pegasus Barge nearly a year ago, the integrated SLS/Orion stack has been worked upon inside the Vehicle Assembly Building (VAB).

Most of the recent work has revolved around closeout work and the removal of an array of platforms that have encompassed the monster rocket inside High Bay 3 (HB3).

Another view, looking up at @NASA_SLS & @NASA_Orion today. Ground Systems teams are working to remove equipment and scaffolding away from the rocket and will continue retracting the platforms until the entire rocket is revealed ahead of the upcoming wet dress rehearsal test. pic.twitter.com/ohzJxBd1IA

“Intertank (IT) Booster fitting RT455 closeout and Engine 4 (E4) and E1 Fairing RT 455 rework and continued the required IT and Forward Skirt engineering inspections and cleaning before access kit removals get underway. The team also continues to make good progress on closing paper and is focused on wrapping up the IT and Engine Section traveled work documentation,” noted SLS processing information (L2).

The readiness is focused on three significant milestones, from the rollout to the WDR, through to the eventual rollback to the VAB once those tests have been concluded.

Most of the closeout work has gone to plan, with the final Orion power up and power down before WDR successfully completed, allowing for the internal access platforms to be removed and the hatch closed. Minor troubleshooting work on the Launch Abort System (LAS) hatch was closed going into March. 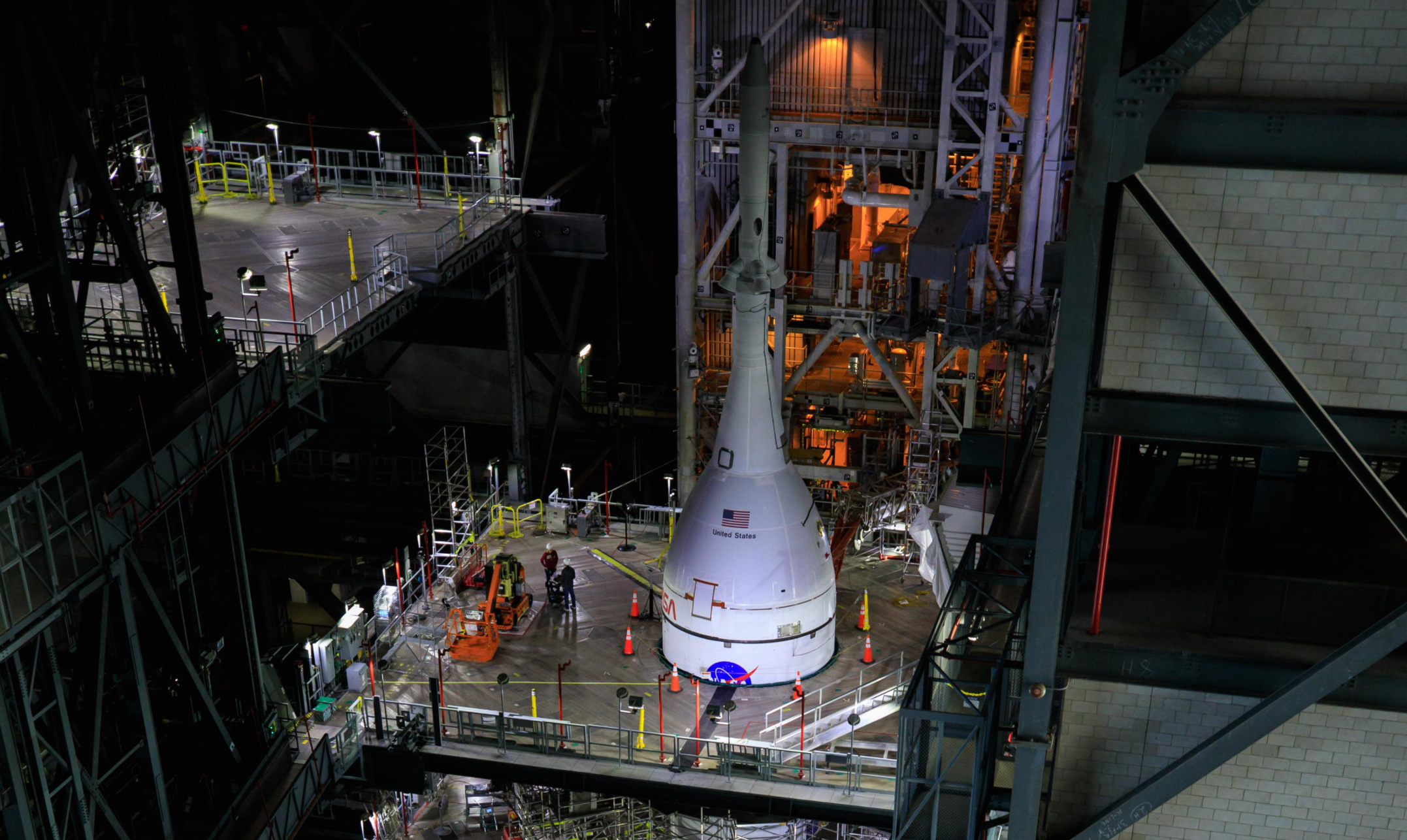 The LAS atop Artemis-1 via NASA.

The only issue of note related to the Flight Termination System (FTS), which – during stray voltage checks – showed a voltage of 1.5V when it should be zero.

“The testing demonstrates an integrated Flight Safety System (FSS) capability with the Range for Range asset command and receipt as required for range safety regulations. Upon completion of the FTS test, the TOSC team will resume platform removals and formal closeout inspections to prepare for rolling out for Wet Dress Rehearsal (WDR),” added SLS L2 Processing information.

Troubleshooting was scheduled for the weekend, with no update available at this time. However, based on NASA tweets showing continued platform retractions currently taking place this week, the rollout schedule of March 17 appears to be intact.

Once SLS rolls out to Pad 39B, preparations will pick up for a WDR test currently scheduled for April 3.

The WDR will be a significant test of the integrated stack, control teams, ML-1, and the associated Ground Support Equipment (GSE) at 39B. While ML-1 has previously visited the former Apollo and Shuttle pad, this will be the first time a launch vehicle has been hosted there since Ares I-X in 2009.

The pad has undergone major changes since its Shuttle era, with the Fixed Service Structure (FSS) and Rotating Service Structure (RSS) removed, creating a “clean pad” that the ML-1 will “plug into” when it arrives on the back of Crawler Transporter -2 (CT-2). 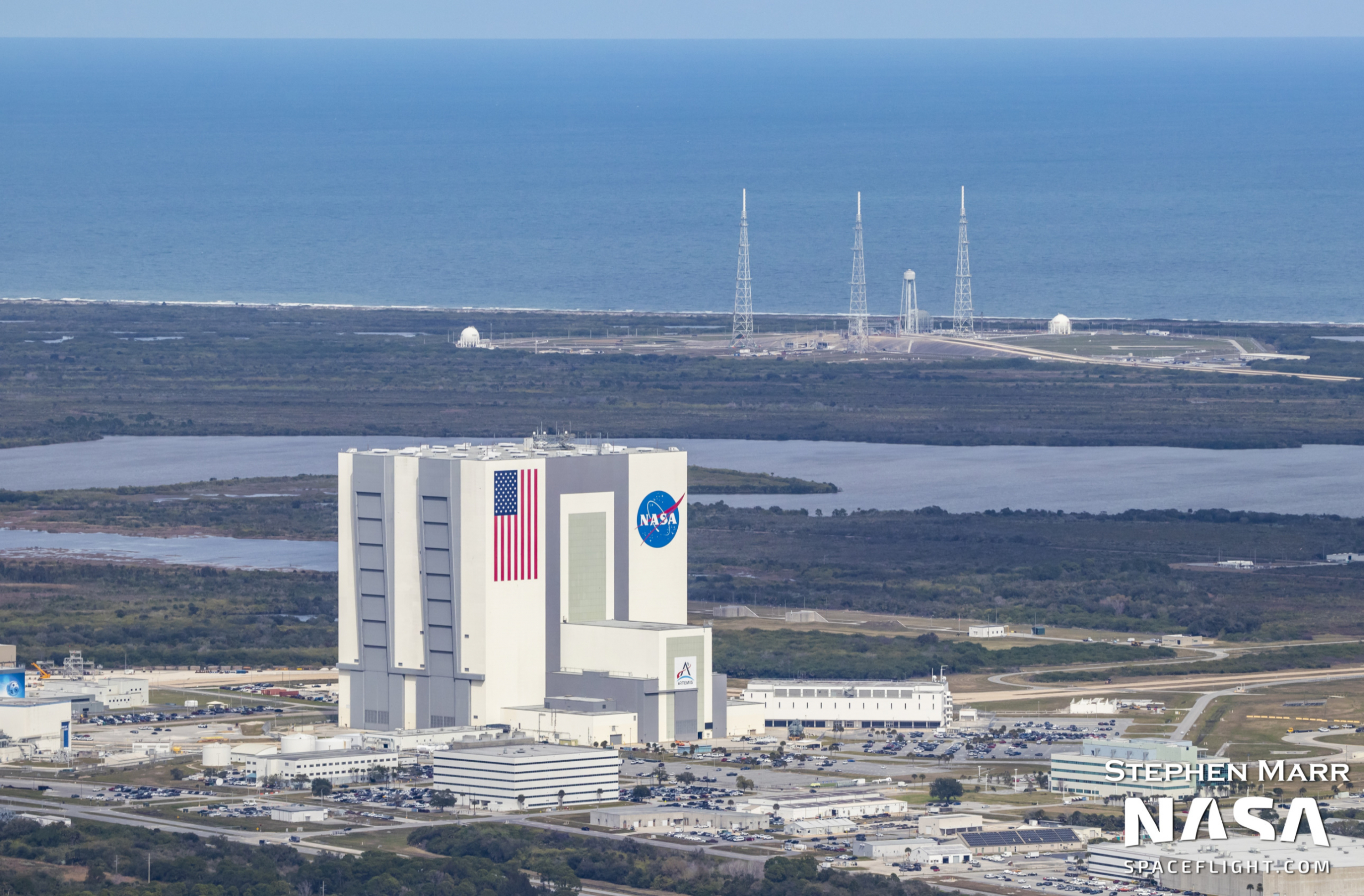 39B via NSF’s Cape Flyover video this month. Photo Stephen Marr for NSF/L2

Most of the recent work has focused on the new LH2 tank for the thirstier Block 1B SLS and preparations for crew launch.

“Reinforcement of Lightning Protection Tower 3 is underway at Pad B supporting modifications for the Emergency Egress System (EES). The EES will provide emergency evacuation via a slide-wire system for flight and ground crews from the Mobile Launcher (ML) crew access level to a landing site at Pad B. The system will support launch operations of the SLS Launch Vehicle during Artemis human spaceflight missions.”

NASA opted to go with the traditional EES instead of keeping the Roller Coaster system that was going to be used for Ares I crew launches. 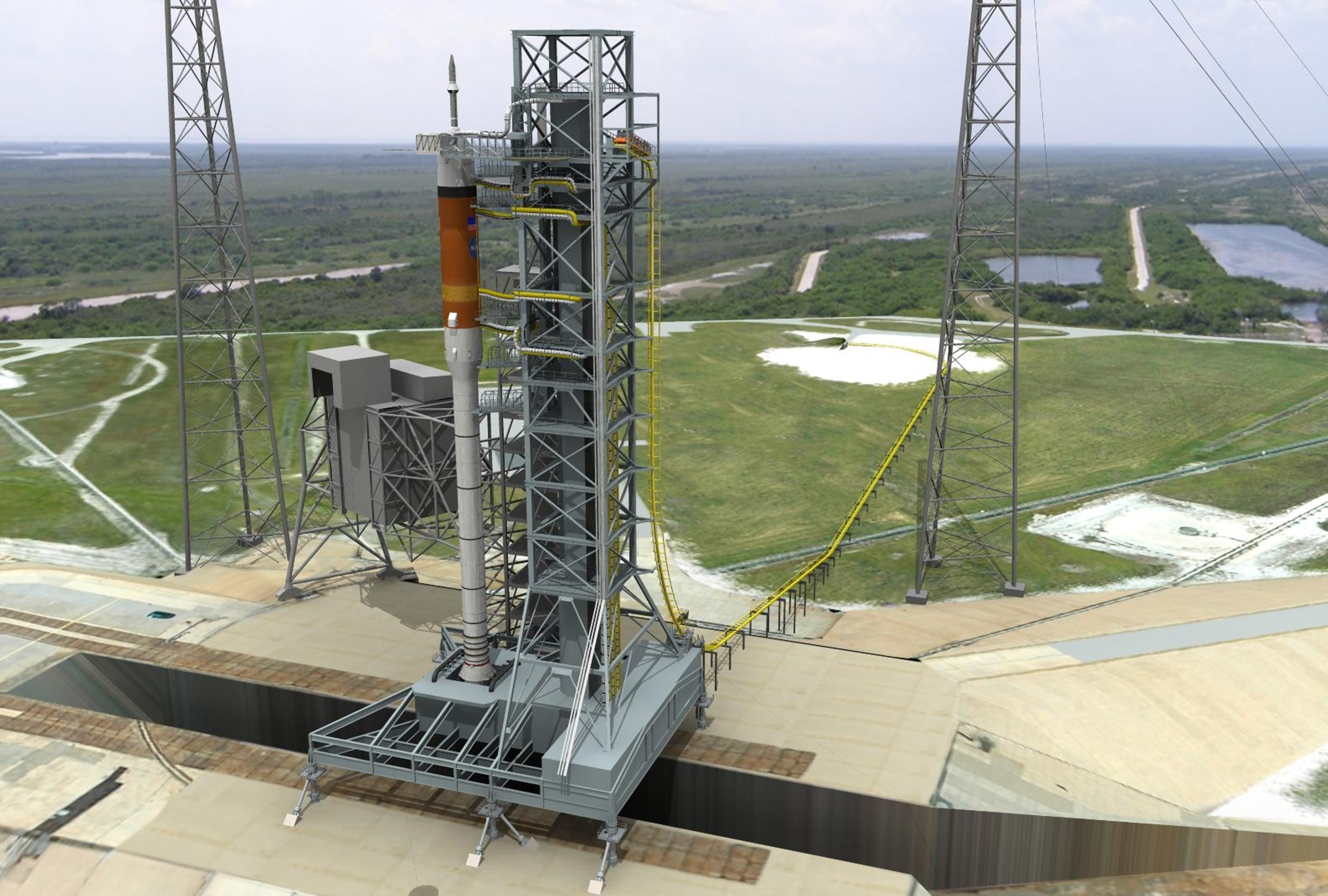 The Ares I EES Roller Coaster via NASA

For SLS, once the WDR tests have concluded, the rocket will be rolled back to the VAB, this time in preparation for its launch flow.

The rollback date is currently documented as “U/R” (Under Review), pending the path of testing at 39B. The same can be applied to the launch date, pending the results of the WDR. Currently, the launch is internally classed as “NET” (No Earlier Than) June.

While Artemis-1 moves towards its launch this summer, three additional core stages are being prepared at the Michoud Assembly Facility (MAF) in New Orleans.

Work on Core Stage -2 (CS-2) has been ongoing for some time. The Core Stage 2 Hydrogen tank was moved from Cell N and transported to Final Assembly last summer, while the CS2 Engine Section (ES) Integration team ran through an extensive sequence of preparations ahead of RS-25 engine installation. 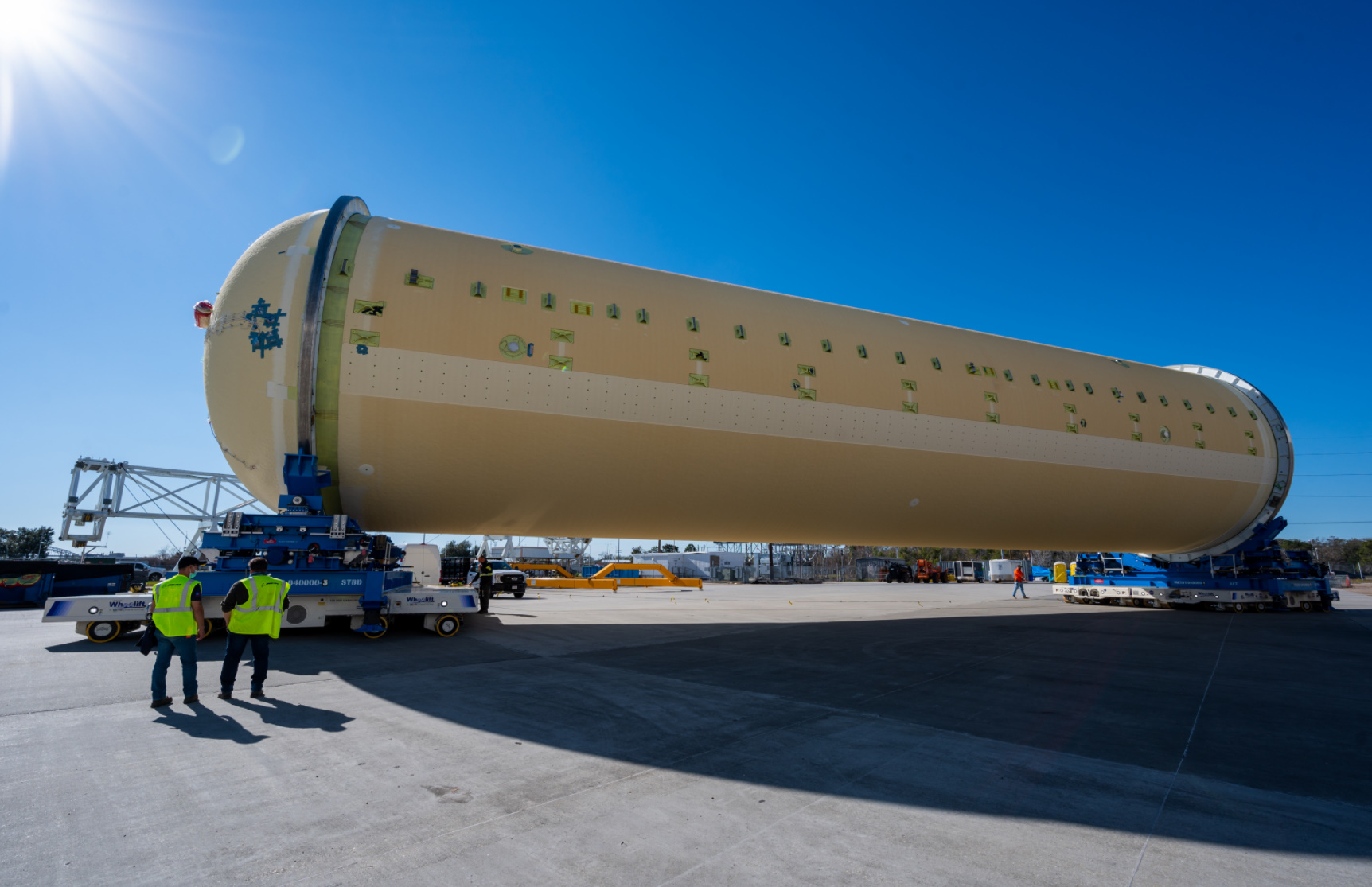 After preparations for the Top Four-Fifths mate, the CS2 Liquid Hydrogen (LH2) Tank was moved from MAF building 110 and brought to Final Assembly at the end of last month. The article is now in final prep to mate with the Forward Join (Forward Skirt, Liquid Oxygen Tank, and Intertank) to complete the CS-2 core stage.

The CS-3 team has been working on the various sections that will make up the third SLS rocket, from the Intertank to the LH2 tank, with the latter continuing preparations for proof test, completing the aft truss check out, aligning the aft truss with the tank, and completing torque, per SLS L2 Processing information.

The CS-3 Liquid Oxygen (LOX) Tank team continued upper trim of the gore body for the forward dome of the LOX tank on the circumferential dome weld tool.

Core Stage -4 (CS-4) has also entered production on its major elements, with work taking place on its engine section, intertank, and LH2 and LOX tanks. Most of the recent processing reports have focused on the early preparations of the engine section.

While CS-4 won’t be launching until the second half of this decade, MAF’s preparations show Core Stage production is unlikely to be a schedule constraint.