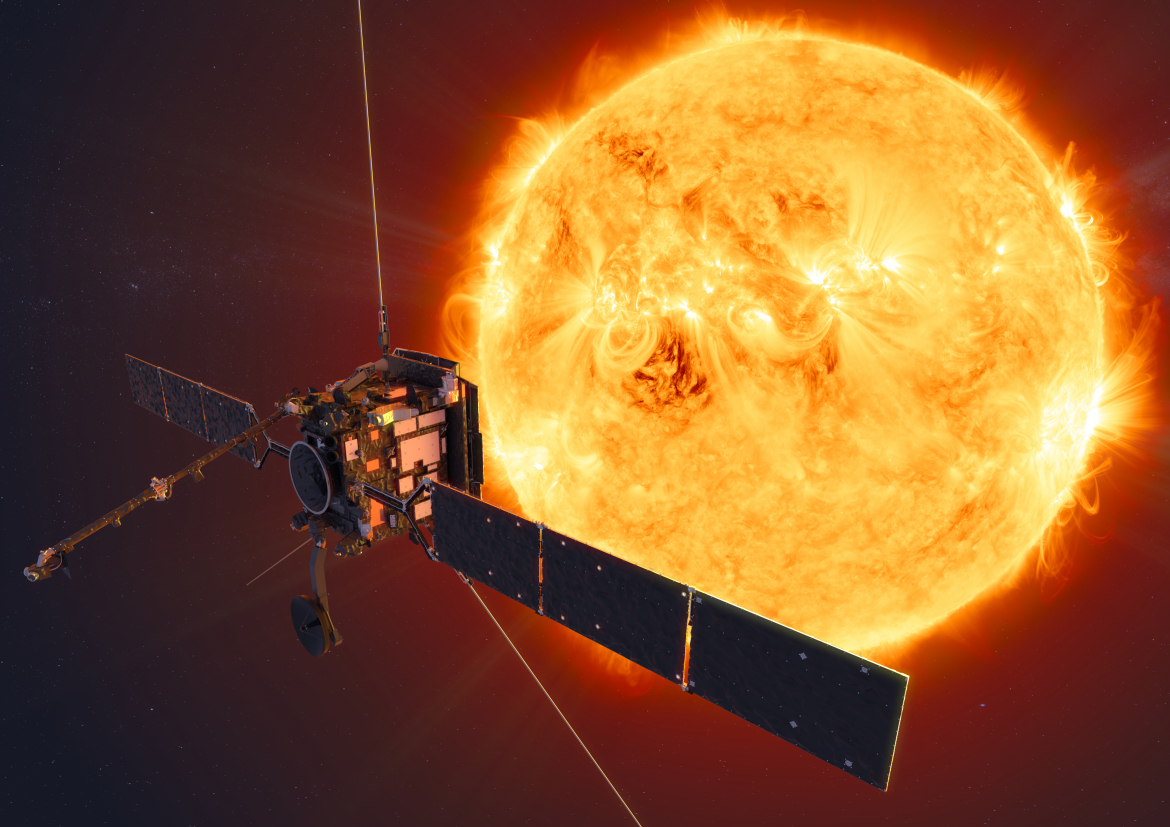 On March 26, 2022, the joint European Space Agency (ESA) and NASA Solar Orbiter spacecraft successfully completed its first close pass through the Sun’s corona, bringing the spacecraft’s specially-designed collection of instruments closer to the Sun than ever before.

During the close pass, called perihelion, all ten of Solar Orbiter’s instruments operated simultaneously, working together to gather important, never-before-seen data. The flyby brought Solar Orbiter less than one-third of the distance from the Sun to the Earth.

Solar Orbiter launched on February 9, 2020, atop a United Launch Alliance (ULA) Atlas V rocket. Since being released by the rocket’s Centaur upper stage, Solar Orbiter has been traveling through interplanetary space in a heliocentric orbit.

In order to lower its perihelion — the point in its orbit closest to the Sun — Solar Orbiter needs to perform several gravity assists with Earth and Venus to achieve a targeted perihelion of 0.28 AU. Additionally, these gravity assist maneuvers help raise the inclination of Solar Orbiter’s orbit, allowing the spacecraft to provide the first views of the Sun’s uncharted polar regions. During its primary mission, Solar Orbiter’s orbital inclination will increase from 0° to 24°.

As Solar Orbiter made its close approach to the Sun, all ten of its instruments were operating and collecting valuable data on the Sun’s characteristics. Now that the flyby is complete, Solar Orbiter scientists from ESA and NASA will spend weeks scouring over and analyzing these data and images.

During the March 26 flyby, Solar Orbiter made its closest approach yet at 48 million kilometers from the Sun’s surface – less than one-third of the distance between the Sun and the Earth.  Solar Orbiter crossed the orbit of Mercury on March 14 and will pass back through it on April 6 as it moves farther from the Sun again. The images of the Sun taken by Solar Orbiter will be the closest images of the solar surface ever taken, and are expected to be released in a few weeks.

Taking images at the Earth-Sun line will allow scientists to compare data and images from Solar Orbiter with other space-based and ground-based solar telescopes. One of the mosaic images Solar Orbiter captured is the highest-resolution image of the Sun’s corona and full disk ever taken. 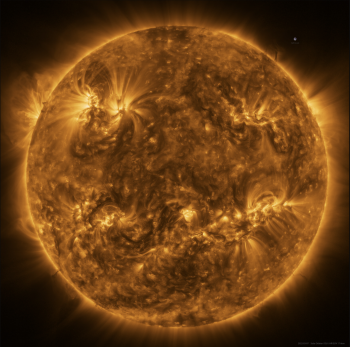 In the image, two dark “prominences,” which are large, bright features extending outward from the Sun’s surface, can be seen at the two o’clock and eight o’clock positions on the Sun (relative to the direction of the image). These prominences are often prone to erupting, ejecting massive amounts of solar material out into the solar system in events called coronal mass ejections (CME). These CMEs are what typically cause “solar storms” on Earth.

Recently, one of these CMEs caused a geomagnetic storm to occur in Earth’s magnetosphere, which led to the loss of approximately 40 SpaceX Starlink satellites.

The EUI was not the only instrument taking data and acquiring images of the Sun at the Earth-Sun line. The Spectral Imaging of the Coronal Environment (SPICE) instrument captured a variety of mosaic images in varying wavelengths of extreme ultraviolet light, including an image of the Sun at the Lyman-beta wavelength of ultraviolet light — the first of its kind in nearly 50 years. SPICE is designed to measure the many layers of the Sun’s atmosphere, all the way from the upper corona to the lower chromosphere.

SPICE imaged the Sun in wavelengths corresponding to four different temperatures, each corresponding to emissions caused by a certain element in the Sun’s atmosphere: 10,000°C (hydrogen), 32,000°C (carbon), 320,000°C (oxygen), and 630,000°C (neon). For comparison, each element is shown in a different color: hydrogen is shown in purple, carbon in blue, oxygen in green, and neon in yellow. 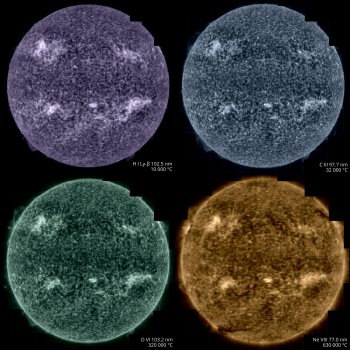 Using SPICE’s images and other instruments and systems aboard Solar Orbiter, solar physicists will be able to pinpoint the exact layers at which solar prominences erupt and trace them to their origin. Additionally, SPICE will allow solar physicists to gain a better understanding of how heat rises through the Sun’s atmosphere — one of the most puzzling mysteries in heliophysics.

Generally, as you move away from a heated object, the amount of heat it emits decreases the farther you get from the source of the heat. In the Sun’s case, its core is the source of its heat, so it’s easy to assume that the Sun’s outermost atmospheric layer, the corona, would be cooler than the surface.

However, this is not the case.

In reality, the corona is around one million degrees Celsius, while the surface of the Sun is only 5,000°C — a startling and extremely puzzling mystery that solar physicists have been trying to solve for years. Determining the exact cause of this phenomenon is one of the key objectives of Solar Orbiter’s seven-year primary mission.