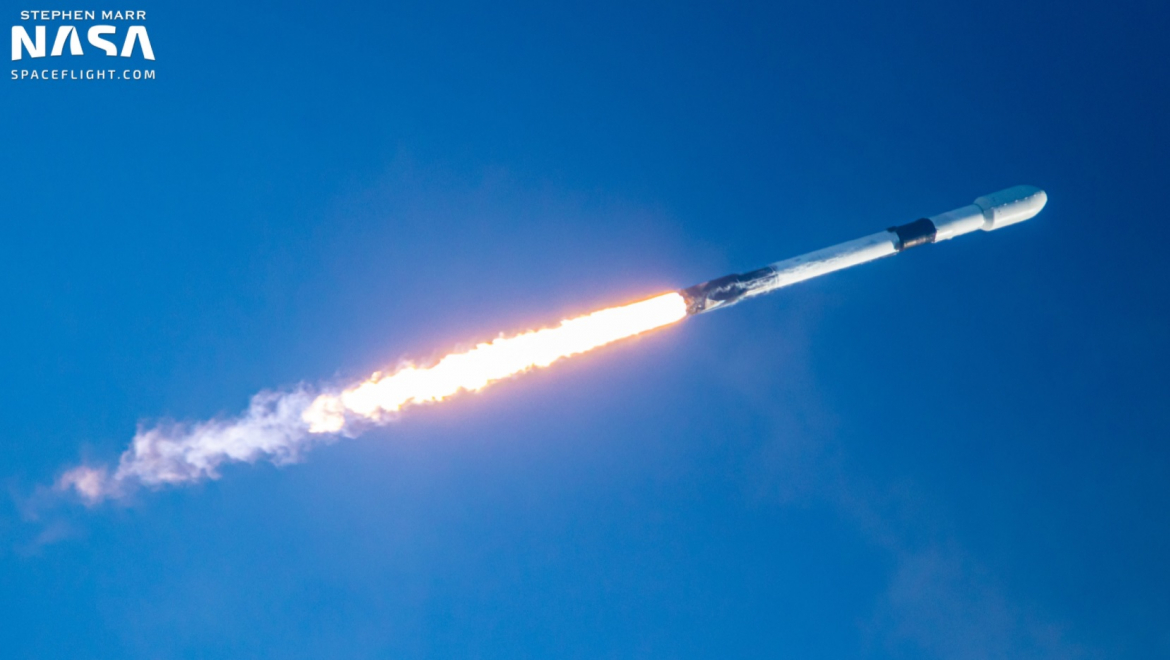 The 45th Weather Squadron, in its launch mission execution forecast for Starlink Group 4-10, predicted an 80% chance of favorable weather for launch. The probability of favorable launch weather stayed at 80% in the backup window just under 24 hours later, but the launch occurred on time on Wednesday.

Following the launch, the Falcon 9 first stage landed 635 km downrange on SpaceX’s autonomous spaceport drone ship (ASDS) A Shortfall of Gravitas. The ASDS was tugged downrange by SpaceX’s multi-purpose recovery ship Doug, which is also serving as ASDS support. Once Doug towed ASOG to the landing zone, it traveled another ~7 km downrange to recover the fairings.

The Starlink satellites were placed into a 317 x 305 km orbit at 53.22° inclination. The satellites will now spend several months raising their orbits to a 540 km circular low Earth orbit using their onboard ion propulsion.

As the Falcon 9 lifted off, it hugged the coast of the Bahamas then turned farther south once clear of land. This maneuver, called a dogleg, allows SpaceX to place satellites into orbits that would otherwise require them to overfly populated areas. Starlink Group 4-10 will be the final Starlink launch out of Florida to fly on this descending node for this year. The next Starlink mission, Starlink Group 4-12, will launch northeast on the ascending node.

The Falcon 9 booster supporting Starlink Group 4-10 is B1052-4. B1052 first flew as the Minus Y (My) booster on the Arabsat-6A and STP-2 Falcon Heavy missions, meaning it was positioned in the negative Y direction from the center core. Following STP-2, the booster was converted from a Falcon Heavy side core to a Falcon 9.

This process consisted of removing the nose cone, mounting the interstage, and removing the forward and aft pushers. As the name implies, B1052-4 has supported three previous missions; interestingly, the booster landed on land on all three previous flights, making this flight the first time it landed on an ASDS.

Starlink is SpaceX’s low Earth orbit satellite internet constellation. With the goal of providing low latency, high-speed internet around the entire globe, Starlink currently consists of over 2,000 satellites in orbit:

This mission boosted the total number of working Starlink satellites to over 2,000, the first time in history that a satellite constellation has reached this milestone. SpaceX is hoping to completely fill the fourth shell of Starlink by the end of the year with about 40 Starlink missions in 2022.

The Falcon 9 uses super-chilled liquid oxygen and sub-cooled RP-1 kerosene. By further chilling – and therefore increasing the density of – propellants, SpaceX is able to get more performance out of the Falcon 9.

At T-1 minute the Falcon 9 entered startup. This means that the vehicle is in charge of the launch countdown: all technical aborts from this point forward are handled by the Falcon 9 itself. Additionally, the pressure in all of the vehicle’s tanks increases as they prepare for the stresses of launch.

At T-2.7 seconds, Falcon 9 commanded the start of its engines. The engines ignite in pairs to reduce startup transients on the vehicle. Once the vehicle has verified that all systems are nominal, the Falcon 9 commands the launch clamps to release, letting the rocket lift off of the pad.

The first stage powered the initial ascent, and after separating from the upper stage made a landing on A Shortfall of Gravitas. Once the second stage has reached orbit and deployed the satellites, the stage will perform a deorbit burn.

SpaceX has two more launches scheduled for March: Starlink Group 4-12, launching on B1051-12 in mid-March, and SpaceX’s first private mission to the International Space Station, Axiom-1, on March 30.