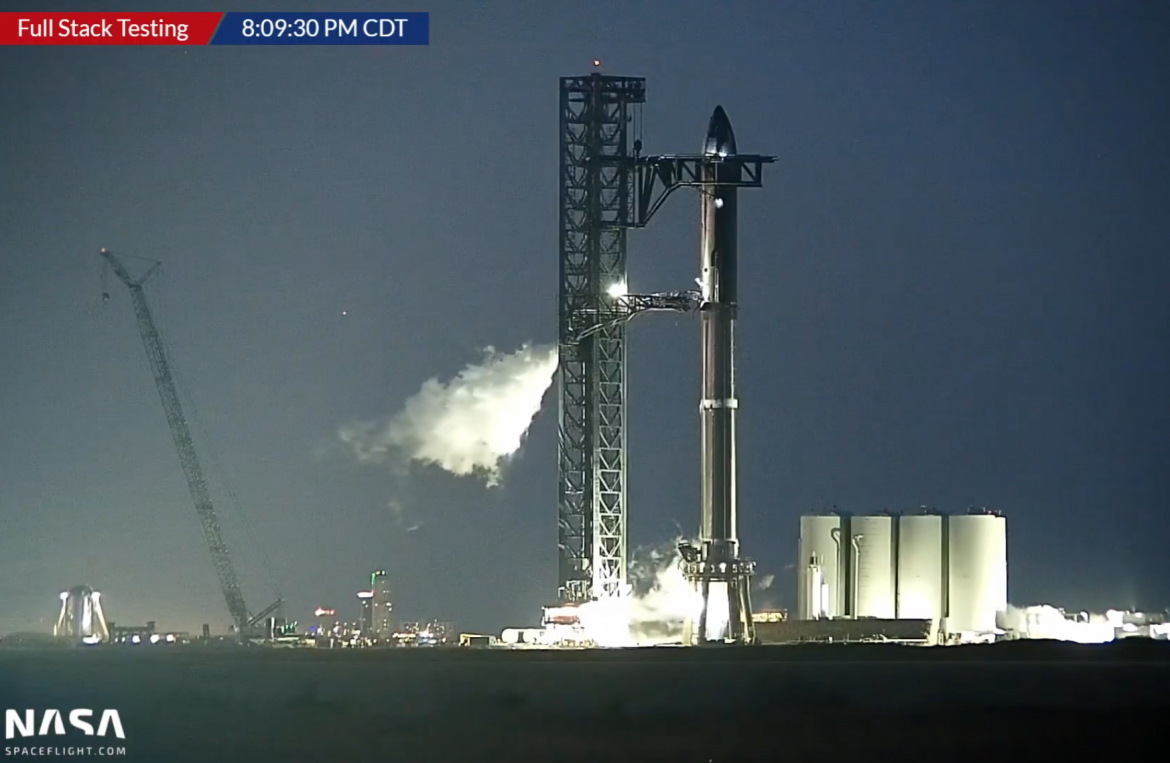 Preparations are underway for the next milestone for the Starship program, following the stacking of Ship 20 atop Booster 4. For the third time, the second using the Mechazilla chopstick system, Starbase has a full-stack at the Orbital Launch Site, this time setting up a cryoproofing test with both the Booster and Ship stacked together.

With Booster 7 waiting in the wings, along with sections for Booster 8 and 9, the current duo is paving the way for a potential orbital flight test, likely with one of the future stacks.

Meanwhile, groundwork at the Kennedy Space Center (KSC) continues apace, focusing on the launch tower that will rise out of the ground at the historic LC-39A.

Although Elon Musk is yet to officially update the status of Booster 4 and Ship 20, even if it becomes confirmed the duo won’t be conducting the orbital velocity test, they will have provided a wealth of ground test data.

Having first been stacked last summer via an LR11350 crane for an initial fit check and photo opportunity before being destacked, the second full-stack provided a crucial test of the Mechazilla system.

The second stacking provided a backdrop for Musk’s most recent program overview, as much as it did not give any reference to the orbital velocity test being conducted by the vehicle behind him.

The vehicle was soon destacked before Booster 4 and Ship 20 underwent cryoproof tests as standalone vehicles, which preempted the likely next step in the test program.

With Ship 20 moved into position and “grabbed” by the chopsticks, the lift took place Tuesday night for a stunning sunset mate with Booster 4 for a third full-stack.

This time the full-stack is likely to test “Stage Zero” systems for loading LN2 into Ship 20 via the Ship QD (Quick Disconnect) plumbing, which will be a new first for the impressive launch tower.

Booster 4 will either join in with the loading of LN2 or at least be highly pressurized to cope with Ship 20 receiving a bellyful of nitrogen.

Once this test is complete and providing all goes to plan, the next test step would be to load LOX (Liquid Oxygen) and CH4 (Liquid Methane) into the vehicle.

This would set the stage for a Static Fire test, although it is still far from certain that the test will be conducted with Booster 4 despite having its full suite of Raptor engines.

The primary indicator of an upcoming Static Fire test will be an overpressure notice delivered to Mary (@bocachicagal) as one of the nearby Boca Chica Village residents.

These letters inform residents there is always a tiny chance the vehicle could fail during such a test and thus advise to stay away from windows when the police siren sounds at T-10 minutes. This has become the leading indicator of a Static Fire test, with no letter delivered during the evening equating to no Static Fire test the following day.

Past the current duo out at the Orbital Launch Site (OLS), Booster 7 is now stacked inside the High Bay, all while Booster 8 has also begun the stacking process.

SpaceX’s typical advances in design were on show during the preparations on Booster 8, with the aft section flip showing the bottom of the Booster Header Tank. Also on view were the Methane Manifold and pipes for the 13 inner Raptors.

Additional design changes are down the line, with Mary (@bocachicalgal) spotting the more rounded dome design alongside some of the other domes at the Production Site this week.

Can you spot the new dome design? 🤩🚀@NASASpaceflight pic.twitter.com/viT1IqIKeQ

With parts for Booster 9 also spotted, SpaceX is preparing to line up several vehicles ahead of the hope of FAA approval for launches out of Starbase, with the results of the Environmental Assessment still expected at the end of this month.

They will be hosted in Starbase’s growing capacity, such as the “Wide Bay,” which continues to grow into the South Texas skyline with extra sections added this week. 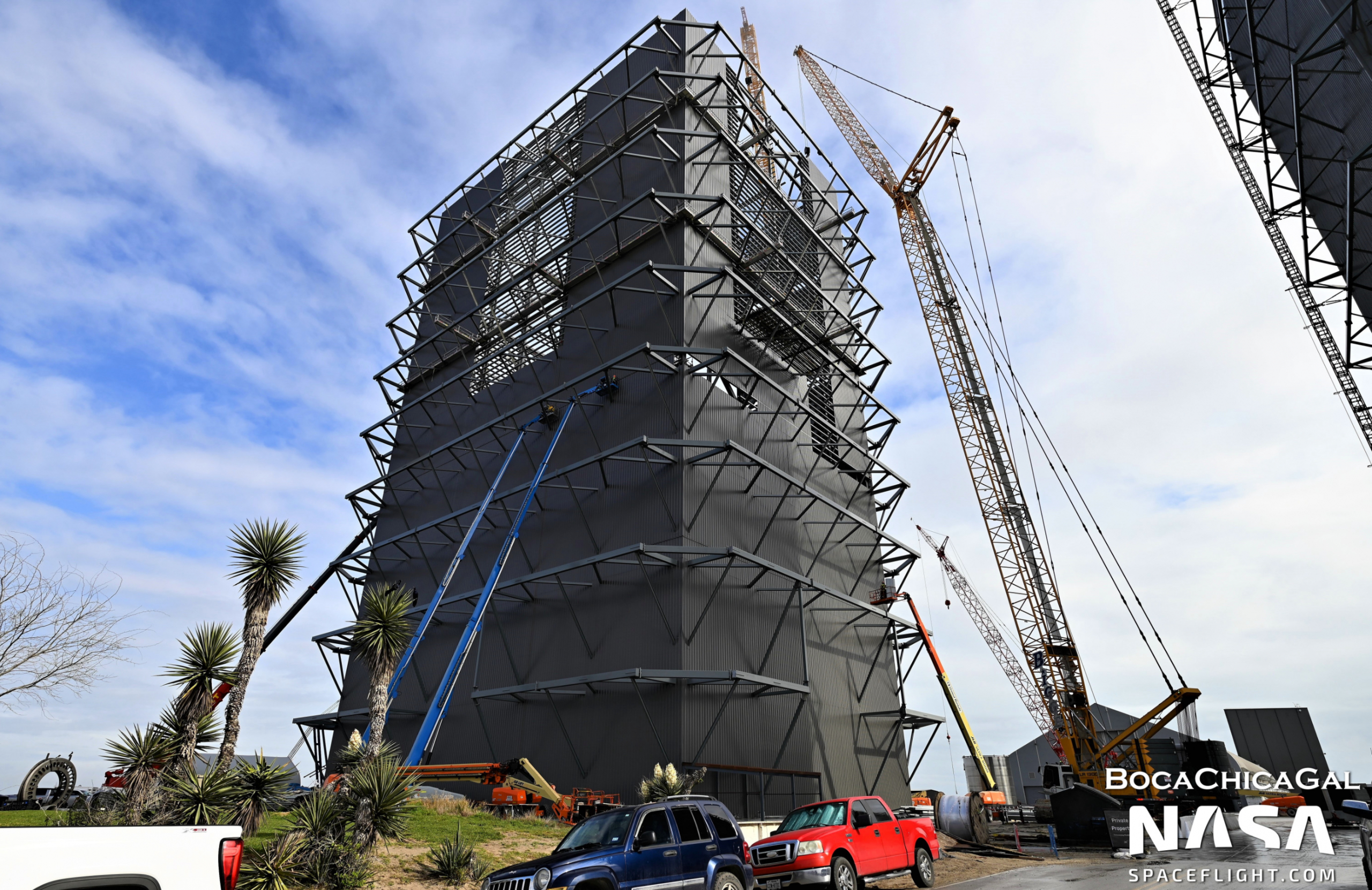 One potential bottleneck for SpaceX hitting the ground running should the FAA assessment come back positive is the supply of Raptor 2 engines.

Although production of the engines has increased, SpaceX still needs a fleet of flight-ready units to be installed into these future boosters.

Testing of the engines is taking place on a daily basis at SpaceX’s McGregor test facility, although it is currently unknown how many have passed the test phase for shipping to Starbase. 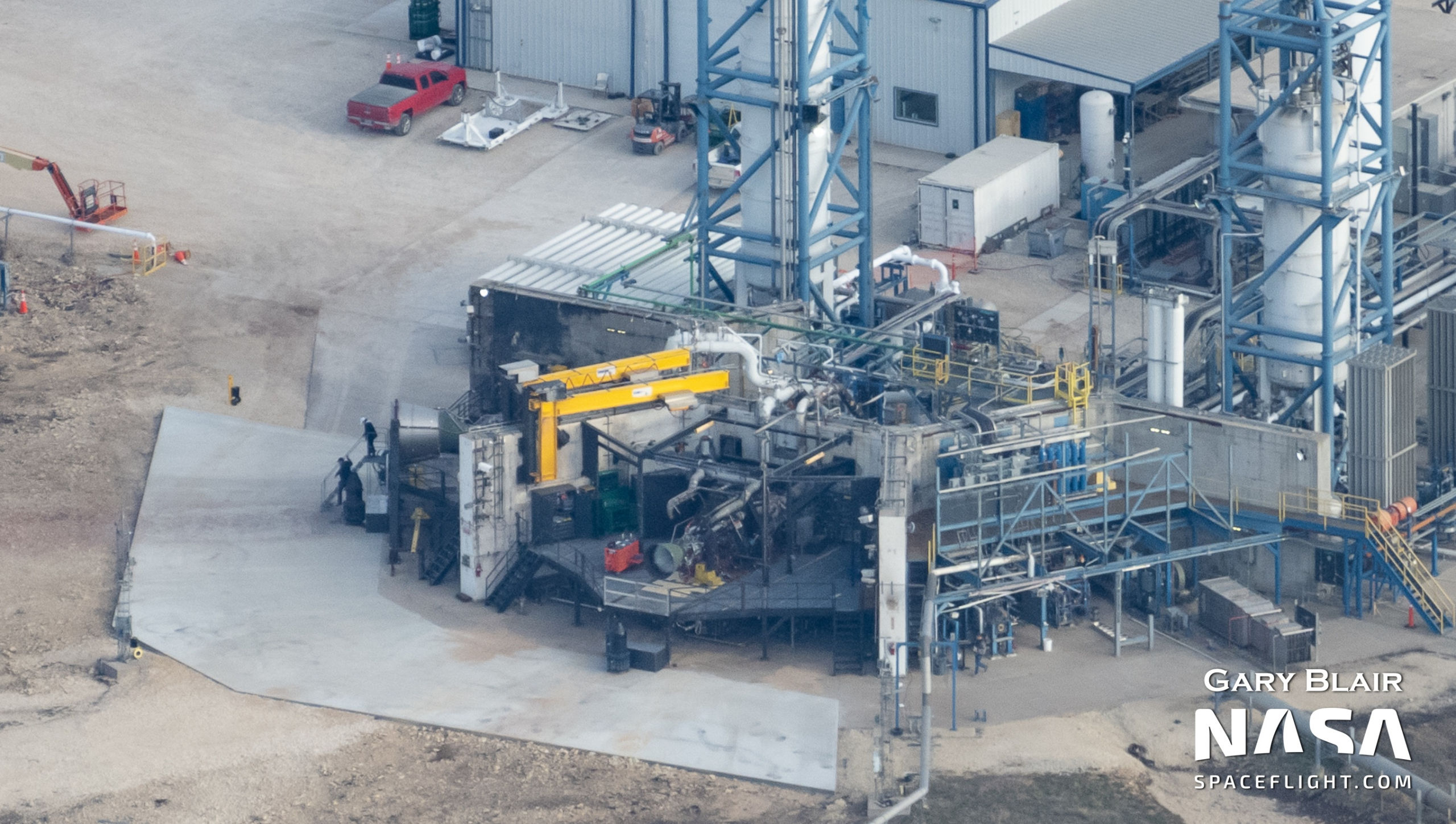 Raptors on the test stand via Gary Blair for NSF/L2.

As of this week’s flyby from NSF’s Gary Blair for L2’s McGregor section, sea level Raptors and an RVac were in the test stand bays, although their serial numbers weren’t clearly visible.

With the Kennedy Space Center (KSC) confirmed to be Starship’s East Coast launch site, work is now in full swing in preparing two areas of the Space Coast to cater for SpaceX’s monster rocket.

SpaceX’s Roberts Road facility has cleared a vast area of land next to its Falcon 9 facility to prepare for constructing a Starship build site. However, they are wasting no time utilizing the area, with the fabrication of the launch tower sections already taking place.

These sections will head out to the nearby KSC launch facility for installation at 39A. The Starship area next to the pad’s ramp is undergoing concrete pouring to set the stage for the mount and tower similar to the one already constructed at Starbase.