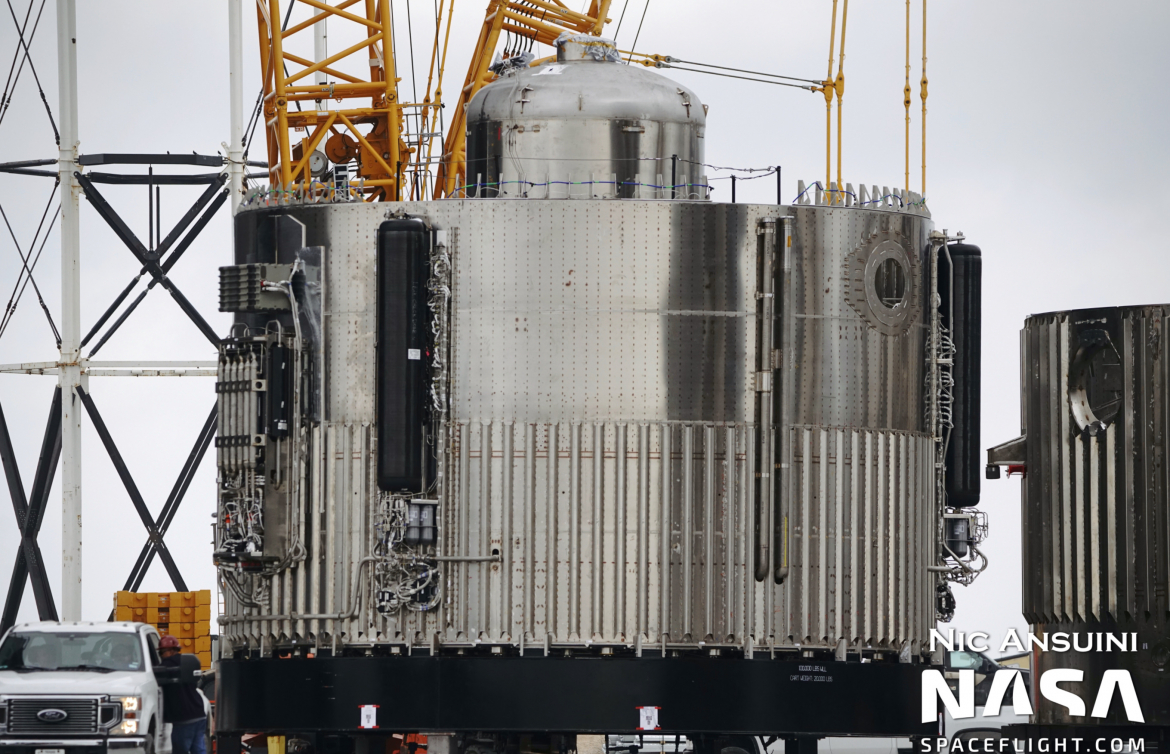 Future vehicles are continuing to take shape in what appears to be a multi-flow of preparations at SpaceX’s Starbase facility in South Texas. While Booster 4 and Ship 20 continue to provide valuable ground test data at the launch site, modifications are being employed on future Boosters and Ships undergoing preparation down the road at the production site.

Over in Florida, the opening elements of Starship’s East Coast future are focusing on the infrastructure for production and launch.

While Elon Musk is yet to officially rule out a test flight for Booster 4 and Ship 20, the duo was always going to provide milestone objectives via ground testing.

This has now included two full-stack milestones, one via a crane and the most recent via the use of the Mechazilla chopstick “stack and catch” system.

Since being destacked, both Ship 20 and Booster 4 have enjoyed a series of cryo proofing tests, mainly with the former.

Utilizing Liquid Nitrogen (LN2), the tests provide data on the vehicle and the Ground Support Equipment (GSE) plumbing that supplies the vehicle. Booster 4’s cryo proofing test involved the Orbital Launch Mount (OLM) on which it still resides, with fueling taking place via connections attached from the Quick Disconnect (QD).

A key future test will be a full-stack proof test, with Ship 20 being supplied with commodities from the Ship QD located halfway up the Launch Tower.

SpaceX will also want to fully test the OLS Tank Farm, which now includes several new CH4 tanks that are currently being installed.

With the forward plan yet to be revealed, along with the fluidity of SpaceX’s test program plans, the potential of Booster 4 then conducting a Static Fire test on the OLM remains an open question. 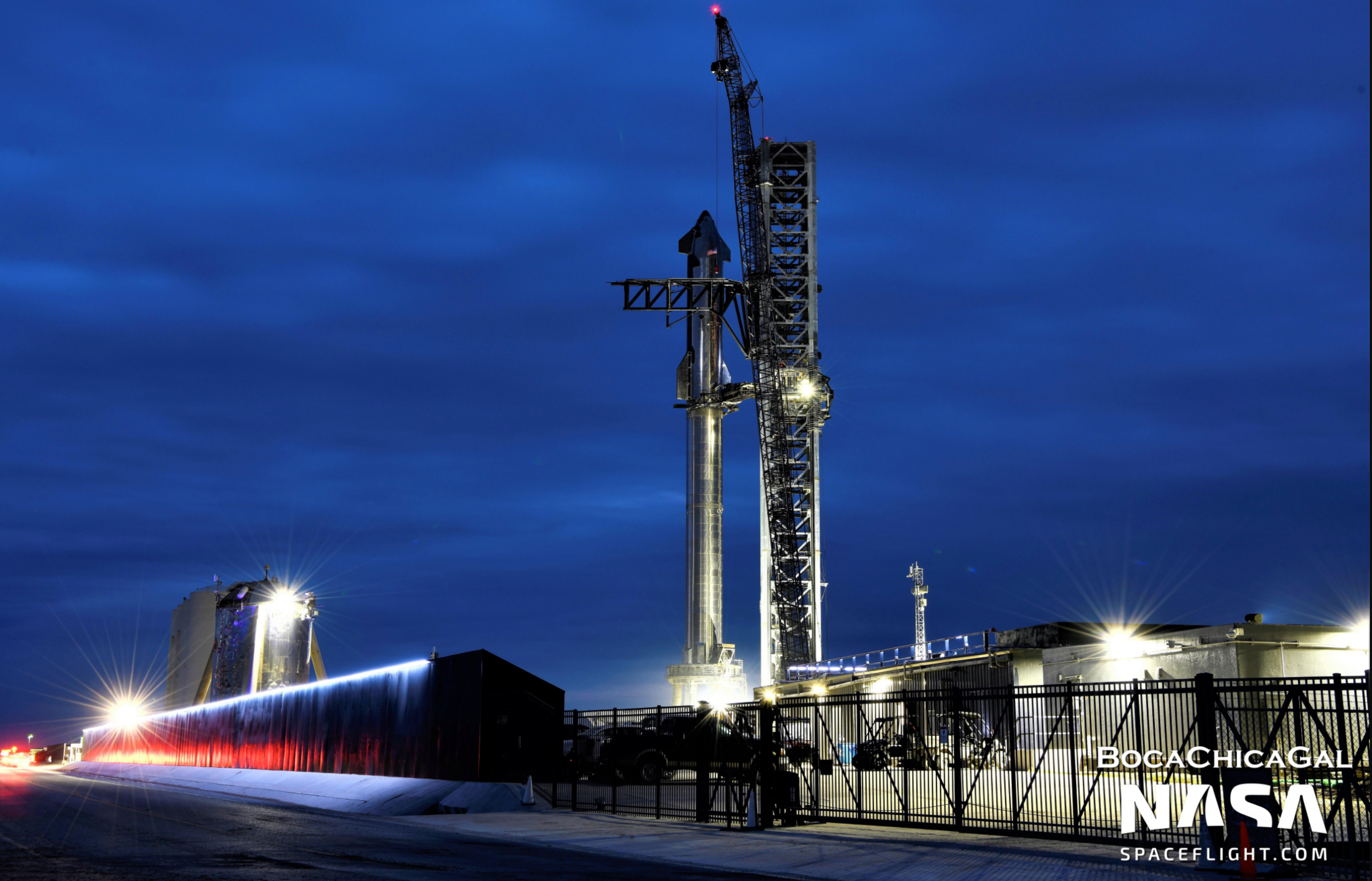 Should SpaceX opt to conduct a series of Static Fire tests with Booster 4, the current record of a six-engine firing – an honor that went to Ship 20 when it fired up its three Sea Level and three RVacs last November – would likely be broken.

The path would likely see an incremental increase of engines firing up ahead of the ultimate goal of all 29 Raptors currently installed in its aft.

The alternative scenario sees SpaceX conclude its current ground testing objectives with Booster 4 and Ship 20 before their retirement and likely relocation at the ever-growing Rocket Garden near the production site, currently occupied by Ships SN15, 16, and 22 along with Booster 5.

SpaceX’s evolution of its prototype vehicles has been at the center of its Starbase roadmap.

With Starhopper – the “OG” of Starbase – watching the comings and goings of numerous vehicles, the progress made since its 150-meter hop is already astounding. However, the last liftoff from the Boca Chica site was over ten months ago.

The pause in test launches is in part thanks to the success of SN15, concluding the high altitude test flight objectives, allowing SpaceX to press toward the full-stack orbital velocity test.

However, such a test requires numerous worlds to align, from a vehicle readiness standpoint – again noting the Super Heavy Booster has yet to conduct a multi-engine Static Fire test – along with paperwork, with a continued wait for the FAA to complete its report.

The only reference to a “delay” came just a few days ago, with Musk citing the need for SpaceX to prioritize “cyber defense & overcoming signal jamming” in relation to unspecific concerns revolving around the use of Starlink in Ukraine.

Musk has not yet clarified if the “slight delays” include the immediate test program or just the initial operational missions of Starship.

Will cause slight delays in Starship & Starlink V2.

The initial operational launches will be tasked with launching large batches of Starlink V2 satellites.

Regardless, there is a high likelihood the orbital velocity test will be refocused to Booster 7, likely with Ship 24.

This would increase the chances of success via the incremental upgrades employed on future vehicles based on lessons learned from ground testing.

Preparations for Booster 7 are being carried out in the High Bay, with a highlight of its production flow involving the rollout and stacking of its aft/thrust section.

With a large Header Tank inside the section and sporting a highly designed Quick Disconnect (QD) plate, the section also has its Hydraulic Power Unit (HPU), and Composite Overwrap Pressure Vessels (COPVs) are already installed onto the side of this section.

While parts for Booster 8 and Ship 25 have also been observed at the Production Site, the focus on Booster 7’s assembly was further amplified by the arrival of its four grid fins.

The continued pace of production shows SpaceX is ready to hit the ground running once it gains permission to conduct orbital launches from Starbase.

Numerous domes are the main clue, with a collection already outside the production tents and far more behind closed doors. 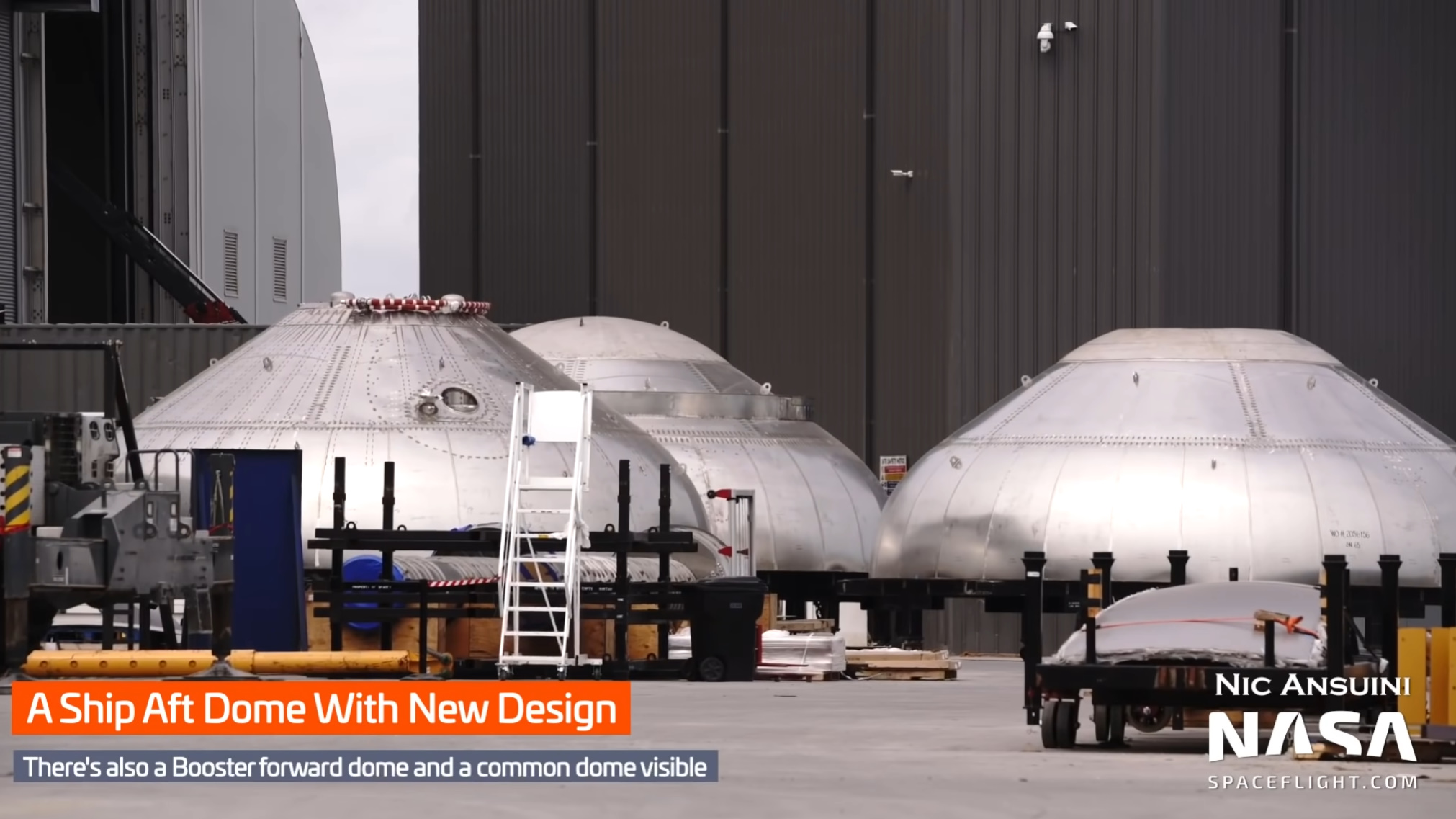 With a variety of welding robots hard at work inside the production tests, Starbase is staging parts for numerous upcoming vehicles.

Several nosecones are being worked on, including cargo payload door prototypes required for operational launches with Starlink satellites.

Additional production capacity is also being created, with the Wide Bay now taller than its High Bay neighbor, aided by an increased stretch of the LR11000 “Bucky” crane that now towers over the build site. 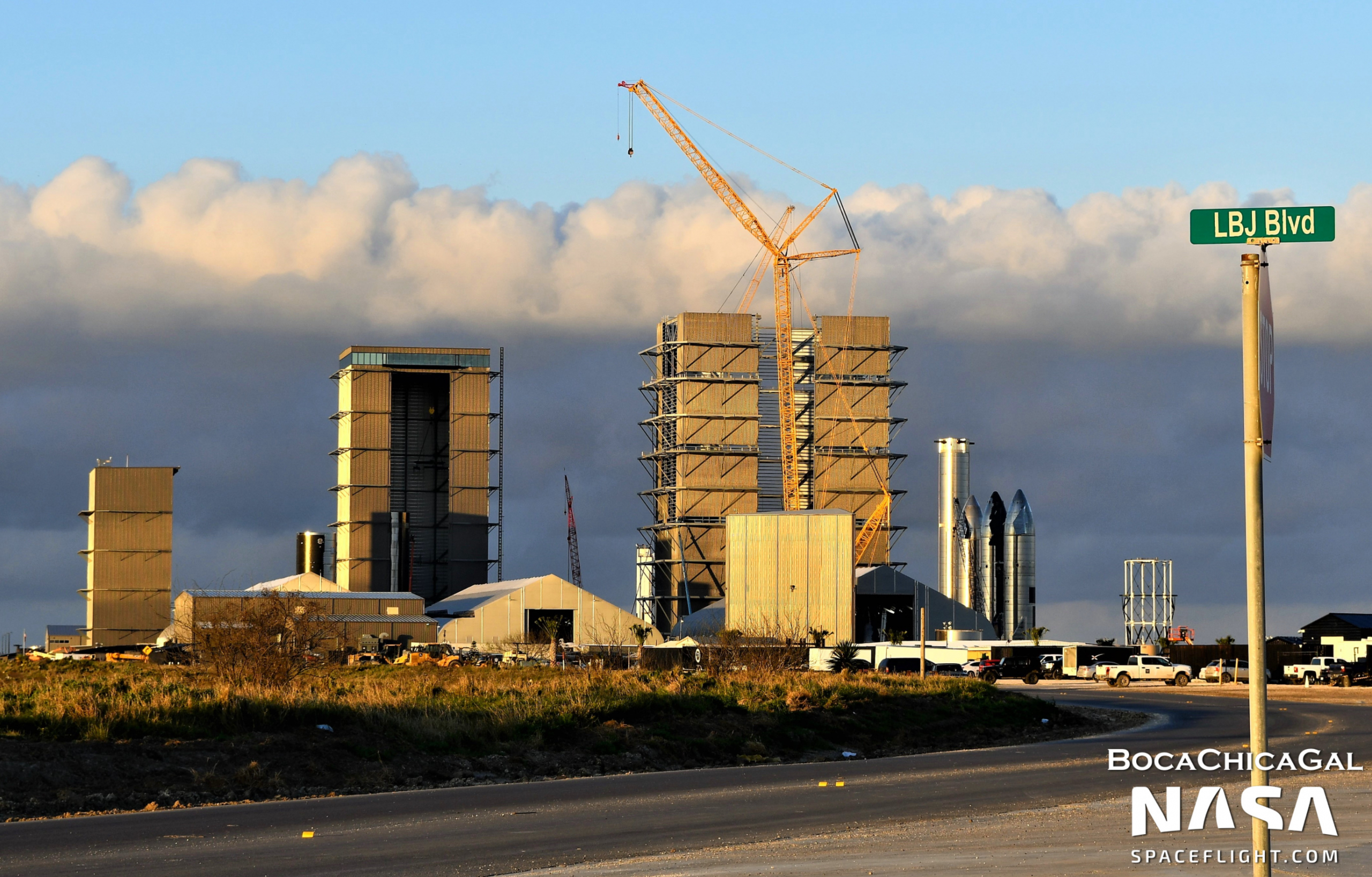 In tandem, space is being cleared to build a new production facility that will take over the role of the tents.

This is a further sign that, despite the concerns Starbase will become more of an R&D facility, as per Musk’s recent update presentation – it will be capable of the impressive production and launch cadence that had been previously envisioned.

Over at the East Coast site, Roberts Road is continuing to prepare to construct a vast production facility to cater to the Florida Starship ambitions.

Most of the work has been groundwork, although SpaceX is wasting no time in utilizing the area to start construction of the sections that will make up the launch tower for LC-39A.

The KSC pad will host a Starship tower, allowing for launches to take place alongside Falcon 9 and Falcon Heavy launches. While Musk noted there would be some differences, it will still be a near-mirror of the Starbase tower, with its Mechazilla stack and catch system.

Oceans-based assets are also back in play, with Deimos departing South Texas for refurbishment work alongside Phobos.

Lone Star was incorporated in June 2020, just before the two rigs were purchased, and a principal of the company is Bret Johnsen. He is also the CFO and President of the Strategic Acquisitions Group at SpaceX.

Phobos was the first to make the trip to Pascagoula, Mississippi – where most of the work has involved stripping it of its infrastructure.

Deimos will undergo the same operation prior to both being updated with the latest alliteration of a launch tower on deck.