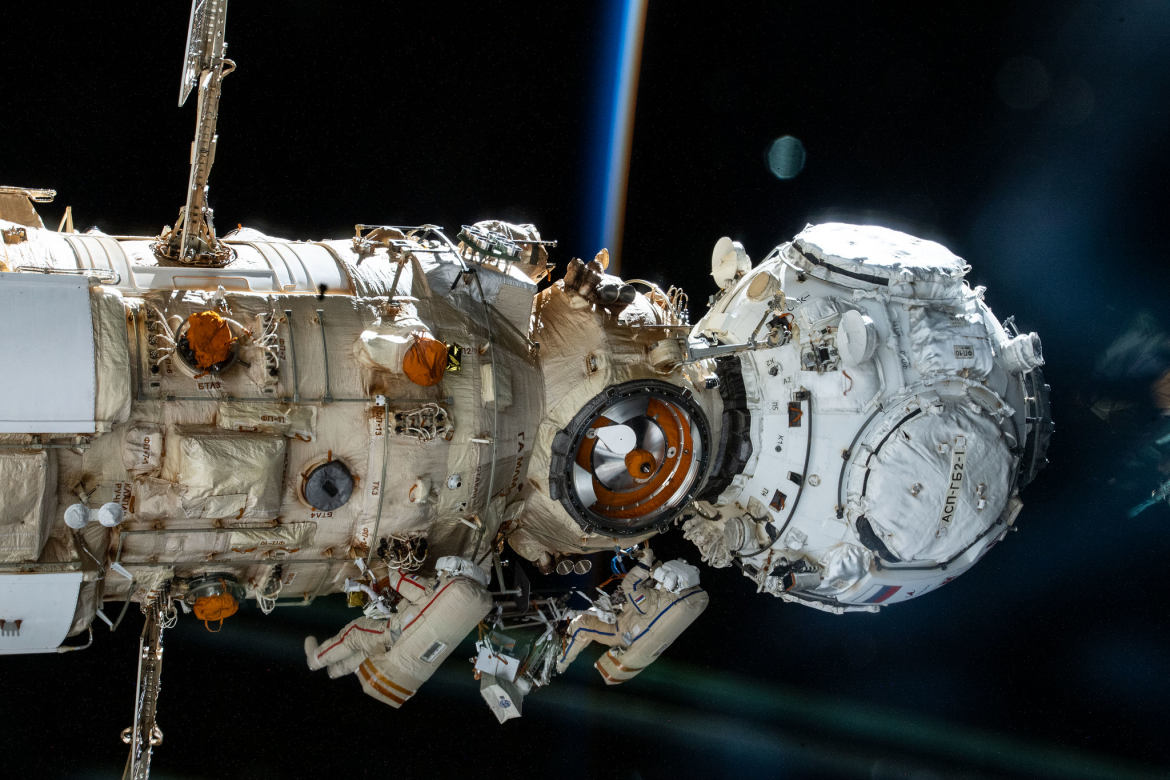 Russian cosmonauts Oleg Artemyev and Denis Matveev carried out a spacewalk on April 18 to prepare the International Space Station’s new European Robotic Arm for use.

The cosmonauts exited the Poisk module’s airlock at around 15:00 UTC and spent over six and a half hours working outside the station to complete their objectives, completing the spacewalk at 21:37 UTC.

Monday’s spacewalk, or extra-vehicular activity (EVA), was the first since Expedition 67 began aboard the International Space Station (ISS) at the end of March.

Designated Russian Segment EVA 52 (or RS VKD #52 – vnekorabelnaya deyatelnost – in Russian), it marked the 52nd Russian EVA made from the ISS and was part of a series of spacewalks to commission the Nauka and Prichal modules that were added to the Russian Orbital Segment last year.

Spacewalks have played an important role in the construction and ongoing upkeep of the International Space Station, with astronauts and cosmonauts performing work outside of the outpost’s pressurized modules to connect equipment, install and relocate hardware. or carry out inspections and repairs. This was the 249th EVA made at the ISS to date, including from the station’s own airlocks as well as from visiting Space Shuttles before their retirement.

Monday’s spacewalk was the first of two planned for April to begin commissioning the European Robotic Arm (ERA). Artemyev and Matveev will venture outside the station again next Thursday to continue work on the robotic arm. A follow-up EVA is then planned for mid-May when Artemyev and ESA astronaut Samantha Cristoforetti will put the ERA through its paces. 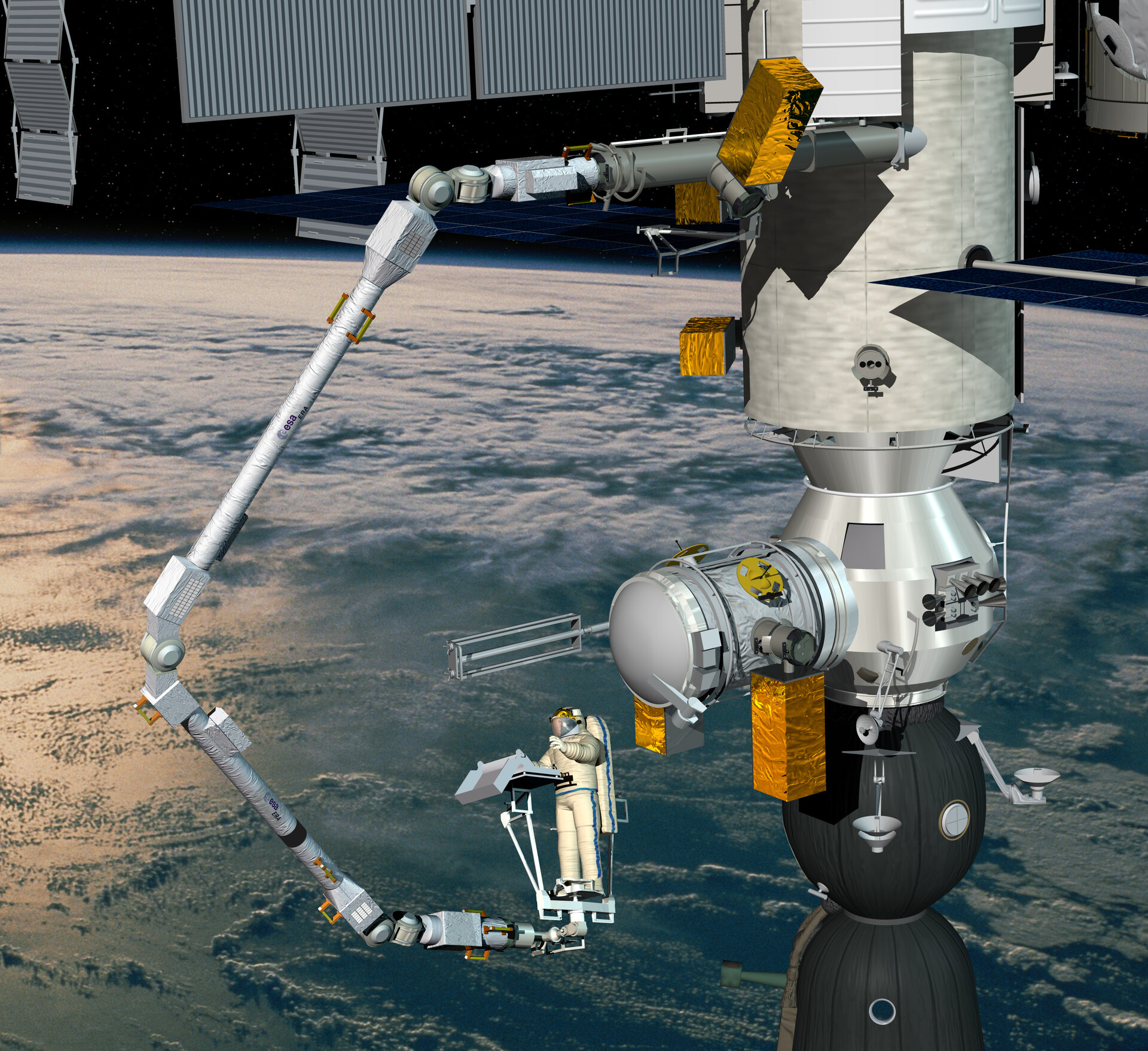 Render of a cosmonaut using the ERA, note this does not show the Prichal module now docked to Nauka (credit: ESA)

Contributed by the European Space Agency (ESA), the European Robotic Arm is one of three remote manipulator systems (RMS) aboard the ISS that can be used to grapple and relocate objects outside the station.

It will join the Space Station Remote Manipulator System (SSRMS), also known as Canadarm2, which can translate across the US segment of the station and has been instrumental in constructing and maintaining the outpost, and a smaller robotic arm on the Japanese Kibo module that is used to tend to the experiments on that module’s exposed facility. There are also a pair of hand-operated Strela telescopic cranes attached to the Russian Orbital Segment.

The ERA launched along with the Nauka module last July, having been delayed many years as the host module’s launch date kept slipping. The arm had been initially planned to launch with the Science Power Platform (SPP), a module that would have provided the Russian Orbital Segment with independent power generation capabilities. Roscosmos reached an agreement with NASA to draw power from the US Orbital Segment instead, leading to the SPP’s cancellation and the transfer of the robotic arm to the Nauka module.

Commissioning Nauka has been a focus for many of Russia’s recent spacewalks at the ISS, with April’s work on the robotic arm marking a significant milestone for the new module’s activation. Once the ERA has been made operational, it will be used to help this process by aiding the transfer of equipment from the Rassvet module which has been in orbit for over a decade awaiting Nauka’s arrival.

Rassvet was delivered to the space station in May 2010 by Space Shuttle Atlantis during its STS-132 mission. This carried with it several pieces of hardware in preparation for Nauka’s arrival, including an experiment airlock, a deployable radiator, and a spare elbow joint for the ERA. The robot arm will be used to help install the radiator and airlock on Nauka later in the commissioning process. 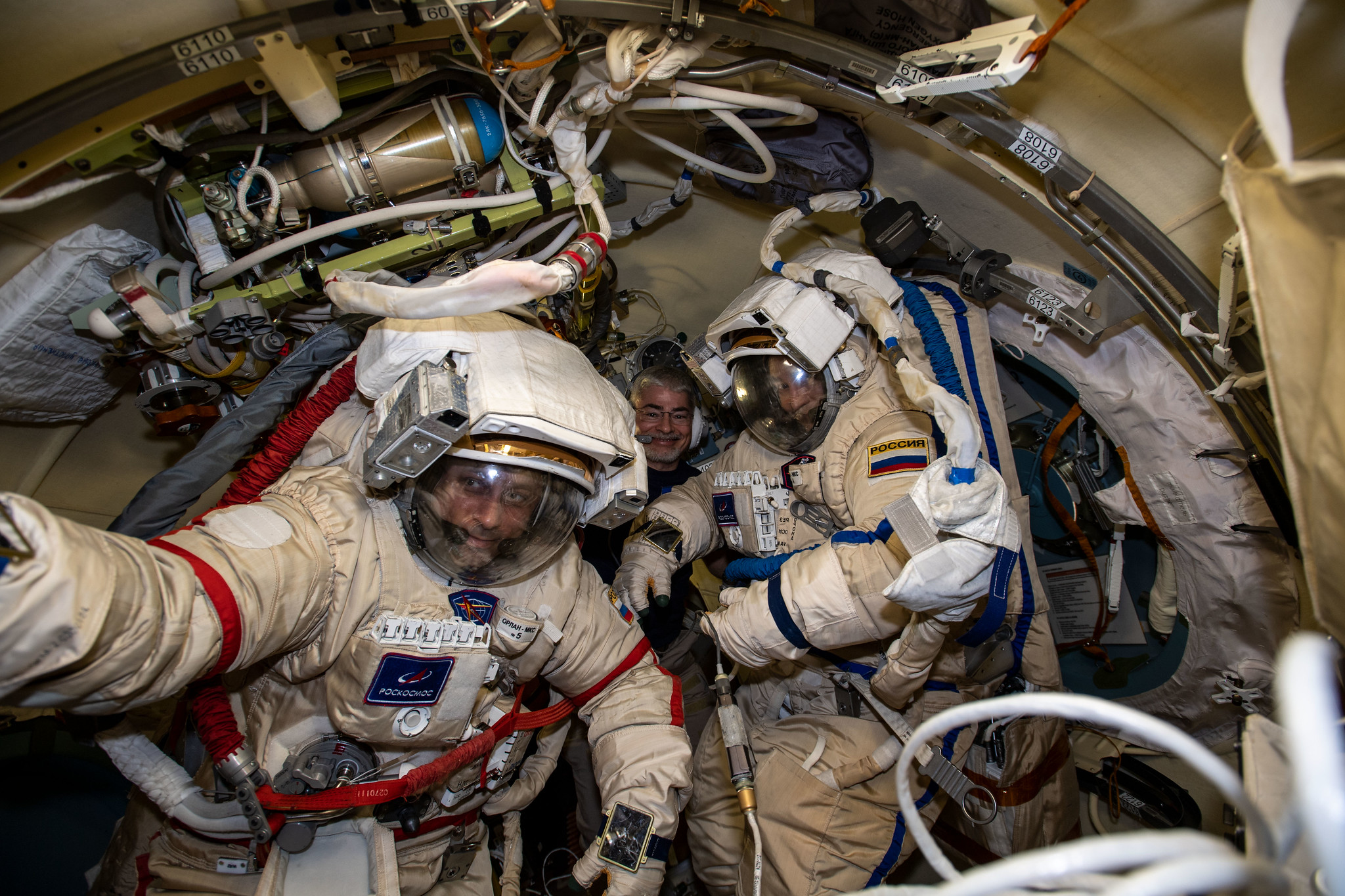 Cosmonauts prepare for a previous spacewalk aboard Poisk (credit: NASA)

For Monday’s spacewalk, the cosmonauts wore Orlan-MKS spacesuits. Oleg Artemyev’s suit, No.5, was marked with red identification stripes, while Denis Matveev wsa wearing suit No.4 which had blue stripes. Both cosmonauts arrived at the station on March 18 aboard Soyuz MS-21. Artemyev is a veteran of two previous missions, having served aboard the ISS during Expeditions 39 and 40 and again during Expeditions 55 and 56. Monday is his fourth spacewalk while it is the first for Matveev, who is on his first space mission.

The cosmonauts began the EVA by exiting the Poisk airlock module — located on the zenith, or Earth-opposed, side of the Zvezda module. Poisk is one of the space station’s two crew airlocks, used for Russian EVAs, while the Quest airlock is used for US spacewalks. Poisk replaced the earlier Pirs module as the station’s Russian airlock and also serves as a docking module.

Preparations for the EVA began well ahead of the spacewalk itself, with the cosmonauts undergoing fitness checks, preparing and inspecting their spacesuits and the tools and equipment they would take outside with them, and installing pressurization tanks in the airlock.

The US astronauts aboard the station provided assistance to their Russian colleagues, gathering tools and equipment from the US Orbital Segment. These included power adaptors, helmet lights and cameras, and tethers used to ensure spacewalkers and their equipment cannot drift off into space. Tool gathering activities took place between April 6 and 7, with the hardware being handed over to the Russian Orbital Segment to support Monday’s EVA.

Russian EVAs begin with hatch opening and end when the hatch is closed, in contrast to US EVAs which are timed based on when the astronauts’ spacesuits were on internal power. After egressing the Poisk airlock, the cosmonauts traversed to their worksites on the Nauka module, which is docked on the opposite side of Zvezda at the nadir – Earth-facing – port, with the aid of one of the Strela cranes. 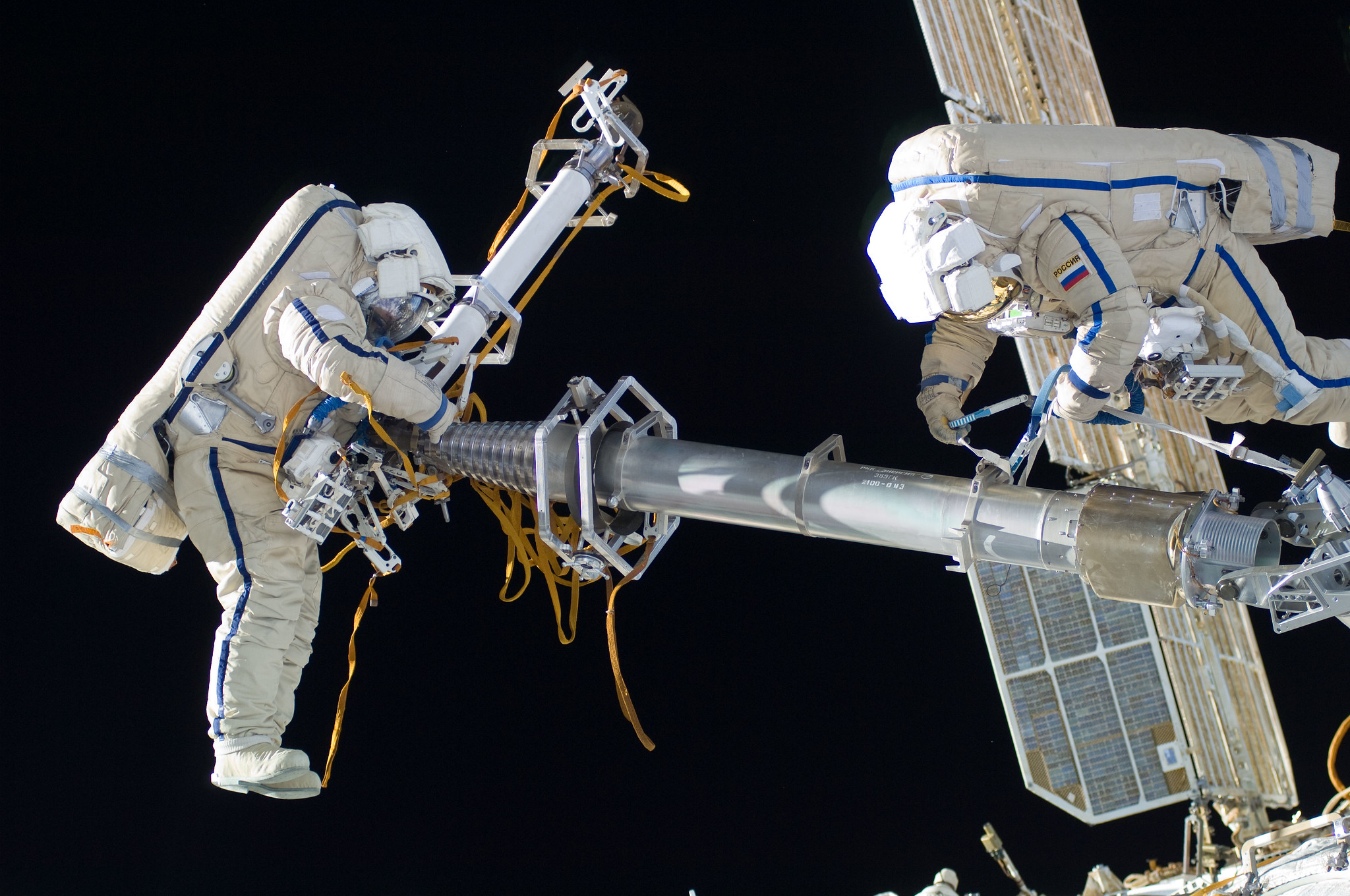 Cosmonauts perform maintenance on a Strela crane in 2012 (credit: NASA)

The cosmonauts had several key objectives to complete to bring the European Robotic Arm closer to operation. They installed an external remote control panel – the EVA Man-Machine Interface (EMMI) – and connected it up to the arm. Artemyev and Matveev were also tasked with removing covers that protected the ERA during launch and its early time in orbit.

The EVA also saw the cosmonauts install handrails to support future work using the robotic arm. In all, they spent six hours 37 minutes outside, returning to the Poisk module once the planned activities were complete.

This spacewalk came during a particularly busy time for the Expedition 67 crew aboard the International Space Station, who are also preparing for the departure of Crew Dragon Endeavour from the station on Tuesday. Endeavour is due to return to Earth at the end of the Axiom-1 mission, which has been the first dedicated commercial scientific mission to the outpost.

The next EVA, continuing work to prepare the European Robotic Arm, is currently scheduled for next Thursday. In the meantime, another Crew Dragon is scheduled to arrive at the station in the form of the new Freedom spacecraft on the Crew-4 mission, which will be bringing four new astronauts to crew the US Orbital Segment. This crew rotation on the US side of the station will be completed when Dragon Endurance returns to Earth at the end of the month.

(Lead image: Cosmonauts work outside the Nauka module during an EVA earlier this year — credit: NASA)