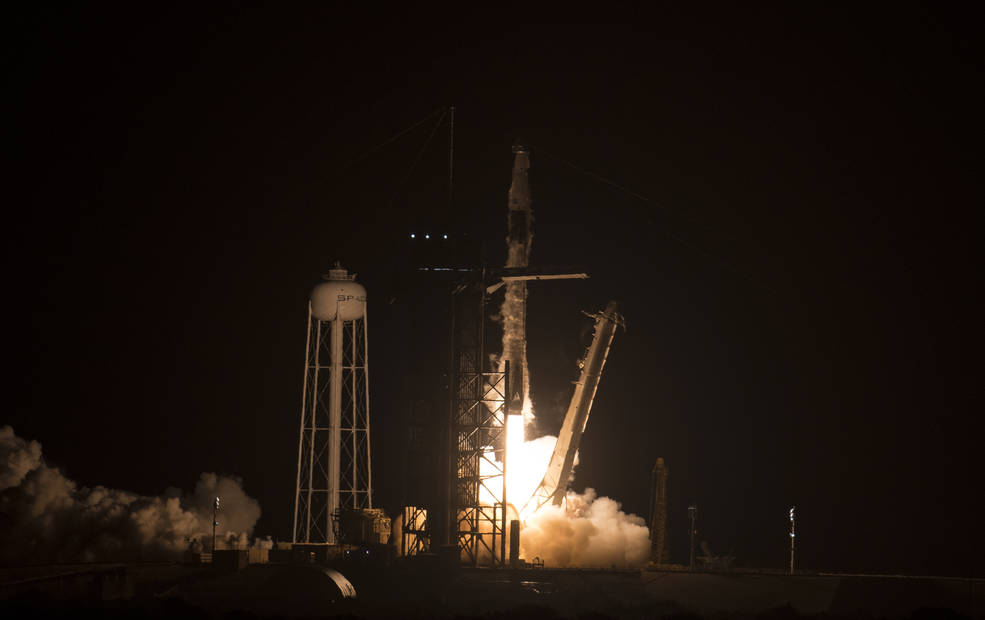 Crew-4, the seventh flight of the Crew Dragon vehicle with people on board, flew three NASA and one ESA astronaut to space for a scheduled six-month tour aboard the veteran space station, the oldest modules of which are close to their 24th year in orbit.

The Crew-4 spacecraft is commanded by Kjell Lindgren, flying his second mission to space and the International Space Station. Lindgren, 49, born in Taipei, Taiwan to a US Air Force service member and his Taiwanese wife, became a medical doctor and flight surgeon, with multiple degrees in medicine as well as a minor in Mandarin Chinese at the Air Force Academy.

Dr. Lindgren joined NASA in 2007 and was chosen as an astronaut candidate in the 2009 Group 20 class after serving as deputy flight surgeon for STS-130 and ISS Expedition 24. He made his first flight on July 22, 2015, aboard Soyuz TMA-17M after serving as the capsule communicator lead for ISS Expedition 30 and working in the extravehicular activity branch.

Lindgren joined Expedition 44 after the Soyuz docked with ISS six hours after launch and conducted two spacewalks with astronaut Scott Kelly (on his 340-day mission of his own) to prepare ISS for the International Docking Adapters that the Crew Dragon now uses, as well as to conduct repairs on critical ammonia cooling systems.

Lindgren spent 141 days in space before landing on the Kazakh steppe at night. Later he also commanded the NEEMO 22 mission on an underwater base, 19 meters under the surface, known as the Aquarius Reef Base, 9 kilometers off Key Largo, Florida in June 2017.

Crew-4’s pilot is USAF Lt. Col. Robert Hines Jr., 47, born in Fayetteville, North Carolina. Chosen as an astronaut candidate in Group 22 in 2017, he will be making his first flight into space. Like the other Crew-4 astronauts, he will be a flight engineer for Expeditions 67 and 68 aboard ISS.

Bob Hines is a decorated veteran fighter and test pilot, having flown 76 combat missions while also having over 3500 hours of flight time in 50 different aircraft types. He has earned several medals related to his service, including combat service in Operations Enduring Freedom and Iraqi Freedom.

Hines, a father of three as well as a ham radio operator, also served as a USAF and FAA test pilot before joining NASA. In 2012, Hines became a research pilot at the Johnson Space Center in 2012, flying the WB-57, Gulfstream GIII, and the DC-9 parabolic “vomit comet” microgravity training aircraft before becoming part of the Group 22 astronaut class.

Mission Specialist 1 Samantha Cristoforetti, 44, born in Milan, Italy, is an Italian ESA astronaut making her second space flight. Chosen as an ESA astronaut in 2009, she launched to the ISS aboard Soyuz TMA-15M on November 23, 2014, and served on the Expedition 42/43 crew. 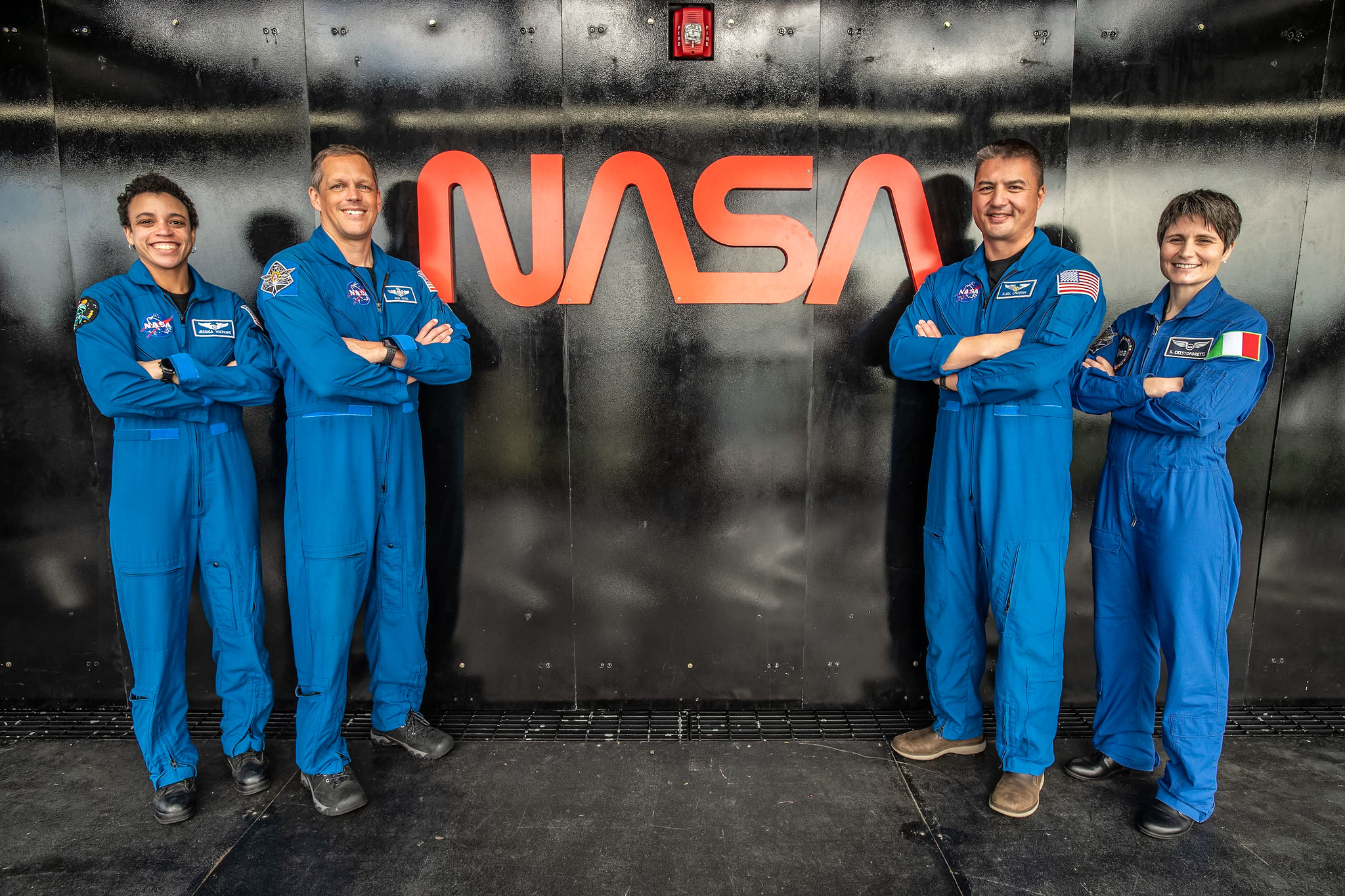 After 199 days in space on the “Futura” mission, setting a new endurance record for women at the time, Cristoforetti landed back on Earth on June 11, 2015. Cristoforetti also served as the NEEMO 23 crew commander in 2019, conducting a ten-day mission underwater at the Aquarius Reef base, with fellow Crew-4 astronaut Jessica Watkins as one of the crewmembers.

Cristoforetti, a mother of one, became one of Italy’s first female fighter pilots while serving in the Italian Air Force, and has degrees in mechanical engineering as well as aeronautics sciences. She is also the second Space Camp alumnus to fly into space, having been an exchange student in the United States when she was eighteen.

Cristoforetti’s current mission aboard ISS is known as Minerva, in keeping with ESA’s tradition of naming its astronauts’ tours of duty aboard ISS. She will serve as the USOS (US Segment) lead while aboard ISS, responsible for all activities on the USOS, and will support many European and international experiments aboard the station.

Mission Specialist 2 Jessica Watkins, 33, of Lafayette, Colorado, is making her first flight into space. Like Bob Hines, Dr. Watkins is a member of the 2017 Group 22 astronaut class. She earned a doctorate in geology from UCLA and has worked as a science team member on the Mars Curiosity rover team.

Watkins was involved in daily rover activity planning as well as testing of Mars rock physical properties and multi-scale investigations of Gale Crater’s geologic history. In addition to her work on Curiosity, Dr. Watkins also served as chief geologist for the Crew 86 NASA Mars analog mission conducted in 2009 at the Mars Desert Research Station in the southern Utah desert near Hanksville.

Watkins also was involved in the NEEMO 23 underwater mission in 2019, at the Aquarius Reef base off Key Largo with Samantha Cristoforetti as the mission commander. She joins other ISS astronauts who have worked on these undersea analog missions, and also will become the first Black woman to live and work on the ISS as a member of an expedition crew.

This is nearly thirty years after Dr. Mae Jemison flew on the Space Shuttle Endeavour aboard the STS-47 Spacelab-J mission, becoming the first Black woman to fly into space. 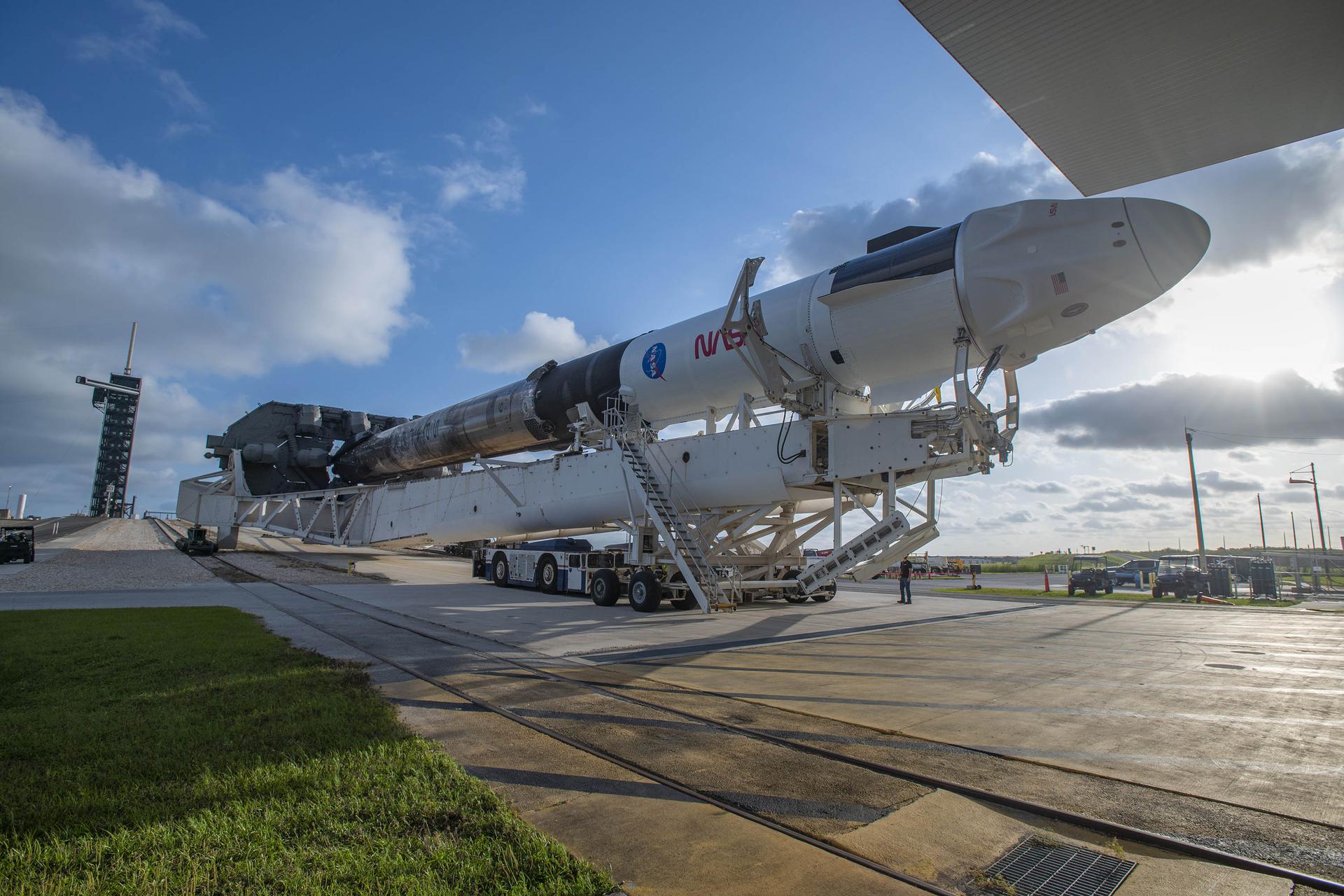 Crew-4 is the first flight of the fourth operational Crew Dragon spacecraft, known as Freedom. Freedom, named to honor Alan Shepard’s Freedom 7 capsule, will be the last Crew Dragon built as per current SpaceX plans, though cargo Dragons will continue to be built. Freedom joins Endeavour, Endurance, and Resilience in the fleet.

Freedom was launched into an orbit inclined 51.6 degrees to the equator and will conduct a series of maneuvers that will take it to the vicinity of the International Space Station. Docking will take place approximately 19 hours after launch.

Crew-4 will use the IDA-3 zenith docking port on the Harmony module on ISS. This port was first used by a crew spacecraft on the Axiom-1 mission that launched on April 8th with Crew Dragon Endeavour.  Endeavour splashed down in the Atlantic off Florida on Monday, April 25th.

Axiom-1’s late return to Earth due to weather in the seas off Florida caused several delays in the Crew-4 launch, as the zenith port is needed for Freedom to dock since Crew-3 is using the forward-facing IDA-2 docking port on the Harmony node module. SpaceX and NASA also want to analyze data on Axiom-1’s flight before launching Crew-4.

As per a tweet by Kathy Lueders, “We want about 2-days between #Ax1 return & Crew-4 launch for @NASA & @SpaceX to complete data reviews & stage recovery assets. In this case, 39-hours between operations gives us enough time to finish up the work. If needed, we’ll adjust Crew-4’s launch to ensure we are ready.” 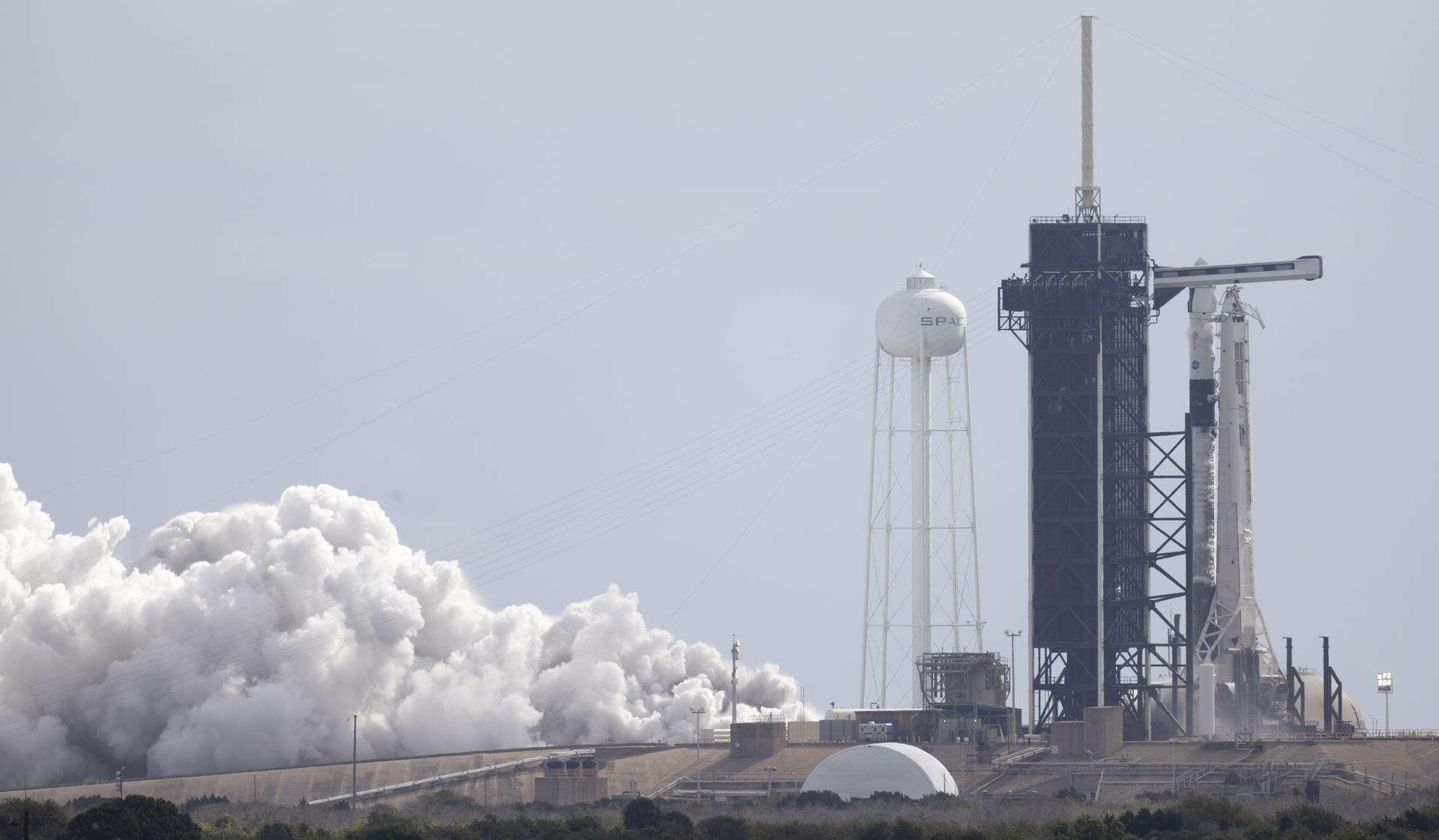 The Falcon 9 booster 1067 has flown three flights, CRS-22 in June 2021, Crew-3 in November 2021, and Turksat 5B the following month. The booster will attempt a landing downrange on the drone ship A Shortfall of Gravitas, while the Crew Dragon Freedom and the second stage reach orbit approximately nine minutes after liftoff.

The weather forecast for Wednesday’s launch attempt is currently 90% go, while the backup day on Thursday is only forecasting a 40% chance of acceptable launch conditions, returning to 80% go for Friday. The launch criteria for Crew-4 not only include weather at LC-39A and the downrange recovery site but abort zones along the flight path if they are needed for an emergency at any point during the launch.

Crew-4 is the sixteenth Falcon 9 launch of 2022 as well as the fourth crewed launch of this year, following Soyuz MS-21, New Shepard NS-20, and Axiom-1. It is also the first of this year’s two USCV (US Commercial Vehicles) crew rotation launches to ISS from the United States.

While Crew-4 is flying on its six-month mission, the NASA Commercial Crew Program continues to prepare for the upcoming, long-delayed Boeing Starliner OFT-2 launch to help certify another human-carrying spacecraft to join the Crew Dragon in operations. A decade after the Space Shuttle fleet was retired to museums across the US, the return of human spaceflight to US soil is now proceeding into a new phase.