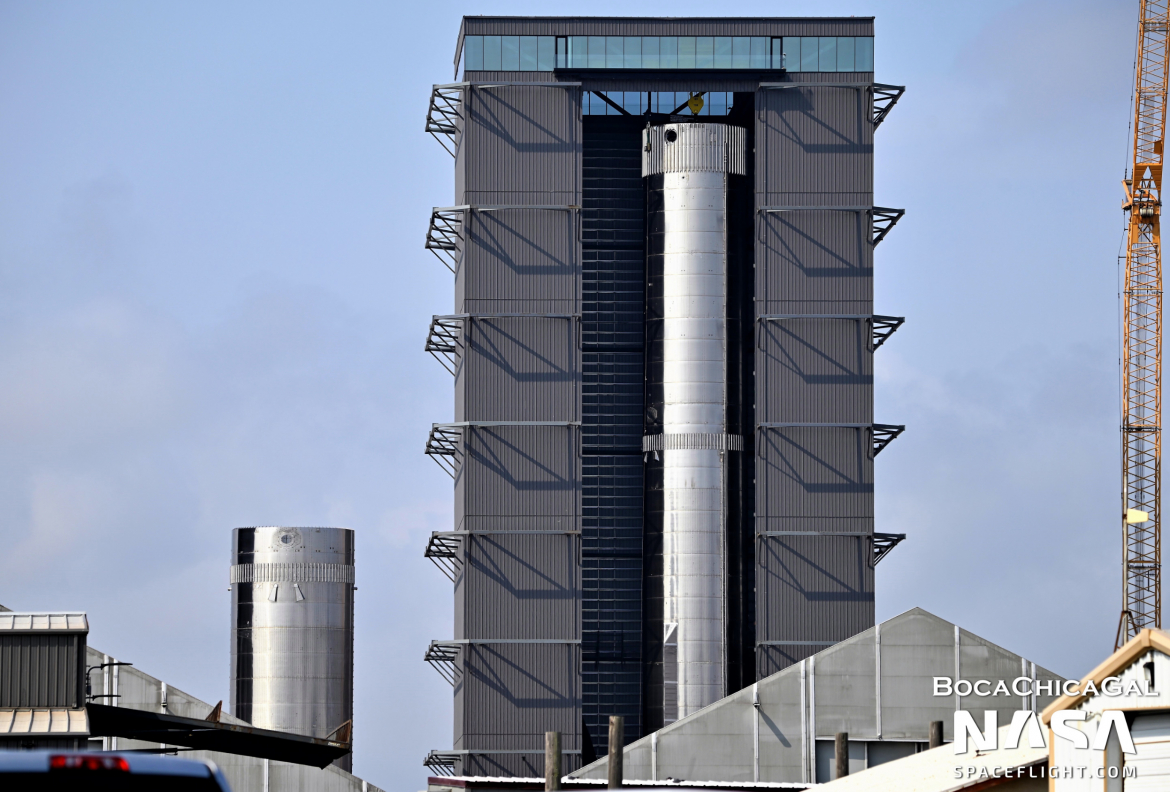 Booster 7 has been returned to the High Bay after undergoing two ambient tests and a cryogenic test at the orbital launch site. Teams have, in the meantime, continued progress on the construction of Booster 8, while welcoming new Raptor 2 engines to Starbase in support of the eventual orbital test flight for Starship and Super Heavy.

At the Kennedy Space Center in Florida, SpaceX has begun construction of their east coast production facility, and groundwork for the Starship launch pad at LC-39A has continued.

Ship 24’s nosecone has had its payload bay attached and has been prepared to be stacked on the rest of Ship 24, including the liquid oxygen (LOX) tank which was moved to the High Bay. This ship is expected to be paired with one of the aforementioned boosters for the first orbital test flight.

Booster 7, back from its round of proof testing, awaits work to address any findings from those tests and preparations for the next round, potentially including Raptor 2 engine installation for static fire testing.

Crews have begun scrapping Ship 21. The Ship’s demise follows its months-long stay at the rocket garden, with that design now considered obsolete following Ship 20’s testing and the upgrades made to Ships 24 and forward.

The newly delivered Raptors are of the updated Raptor 2 design, which is a crucial part of orbital flight readiness.

One of the new Raptors was identified as number 42, which is a huge jump from the previously highest number spotted which was 25. Then, on Thursday, Raptor 51 was spotted via the delivery of three more Raptor 2 engines.

A new booster stand is under construction, allowing for more boosters to be produced and enabling rapid development and iteration.

Construction on the new High Bay continues as the final level has been installed and about a third of the roof has been completed. This will allow for some production of ships and boosters to be moved to what is now documented as High Bay 2, giving SpaceX even more room to assemble the many vehicles in the works.

Nearby, a new tent and a new factory building are being built to expand production capabilities, and modifications to the existing High Bay are being made. This includes removing the construction elevator from the northern side of the High Bay and the possible addition of a proper elevator inside the building.

The old GSE (Ground Support Equipment) plumbing was removed from the Orbital Launch Tower and new plumbing was installed. Meanwhile, Ship 20 was moved to Suborbital Pad B and will not undergo any more testing.

Both the Chopsticks and the Quick Disconnect (QD) arm underwent a variety of movement tests after the QD arm returned to the Launch Site, though it still does not have its “claw” reattached which allows it to grab onto Starship during fueling.

Finally, several domes were moved to the scrap yard while a new flatter dome was spotted. It is still unknown which vehicle will receive this new dome design.

Over at the Kennedy Space Center (KSC), the walls for the expansion of Hangar X have been completed, as well as the loading dock which will allow for deliveries of Falcon 9 parts, Merlin engines, and fairings, in addition to Starship components.

On the western wall of the extension, two doors have been installed which seem to be the perfect size for payload fairing halves, allowing for SpaceX to complete the refurbishments of the fairings in-house.

The road north of the facility is being paved to support transport and traffic related to both Falcon and Starship.

Cutouts for concrete footings for the KSC Starship factory, the future birthplace of tank sections, domes, and nosecones, are now visible, marking the start of the east coast production site.

Plans also show that a High Bay will be part of future construction and evidence has shown that construction of this may be beginning soon. This will play a crucial role in getting a Starship program up and running in Florida, as obviously there needs to be an assembly building for the vehicles. These bays are expected to closely resemble the new High Bay in Texas. 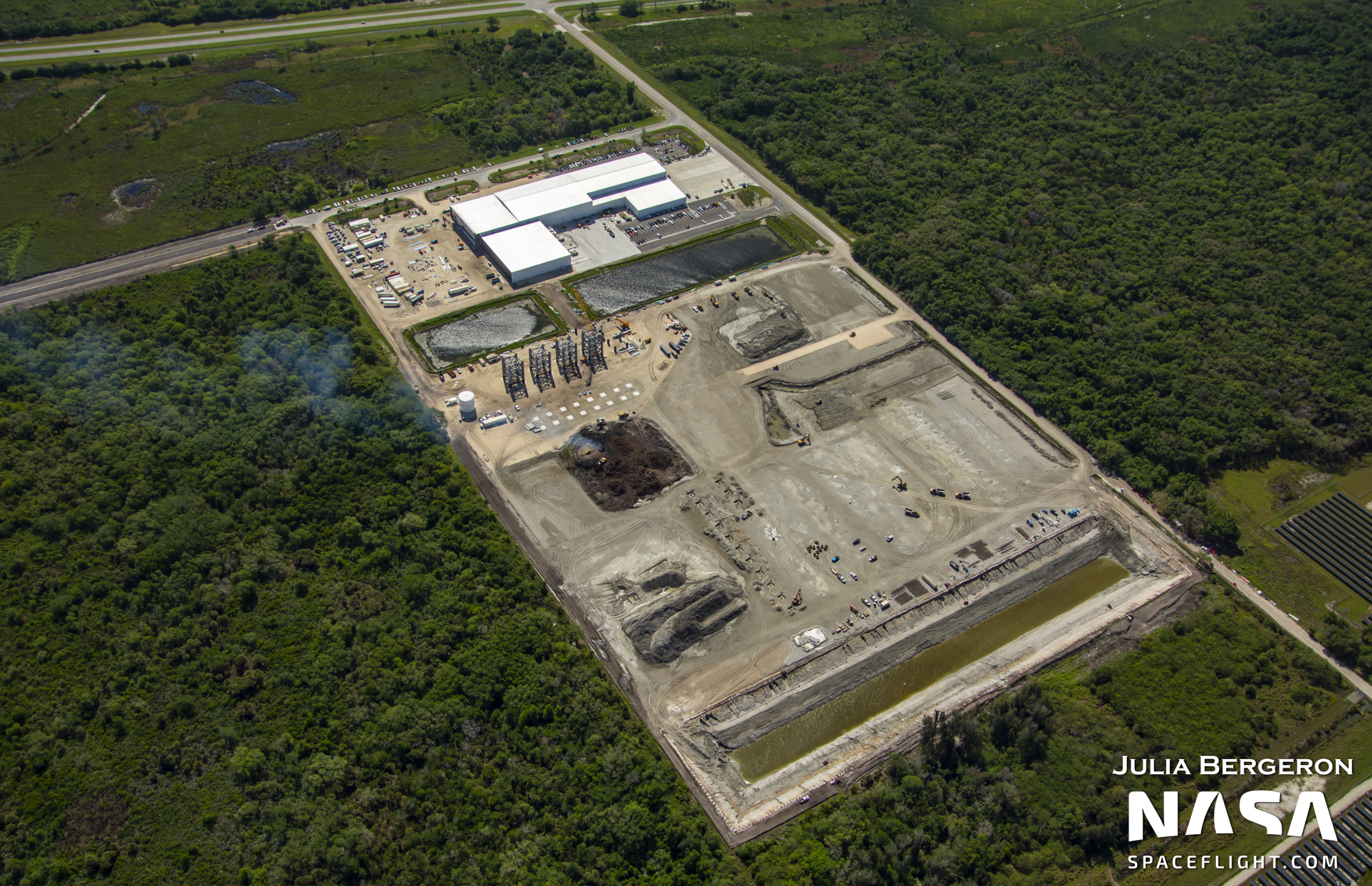 Regarding the Orbital Launch Tower in KSC, the third and fourth tower segments are under construction, which include a bumper stop for the Chopsticks and an elevator shaft. The “feet” to be used for the construction of a fifth segment are already installed, and the feet for segment six were also spotted nearby, indicating the construction of these two components is imminent.

It appears the tower in Florida will be the same, or at least very similar, as the one in Texas, and preparations have been made for the production of the remaining segments. However, unlike in Starbase where they rolled out each segment individually as they were built, it seems this time SpaceX is building all eight of the segments before assembling the Orbital Launch Tower.

At the historic Launch Complex 39A, the concrete base for the tower is beginning to rise in preparation for the stacking of the tower segments. The first stage of concrete filling for the tower base appears to be complete, and the foundations for the orbital launch mount are being built. 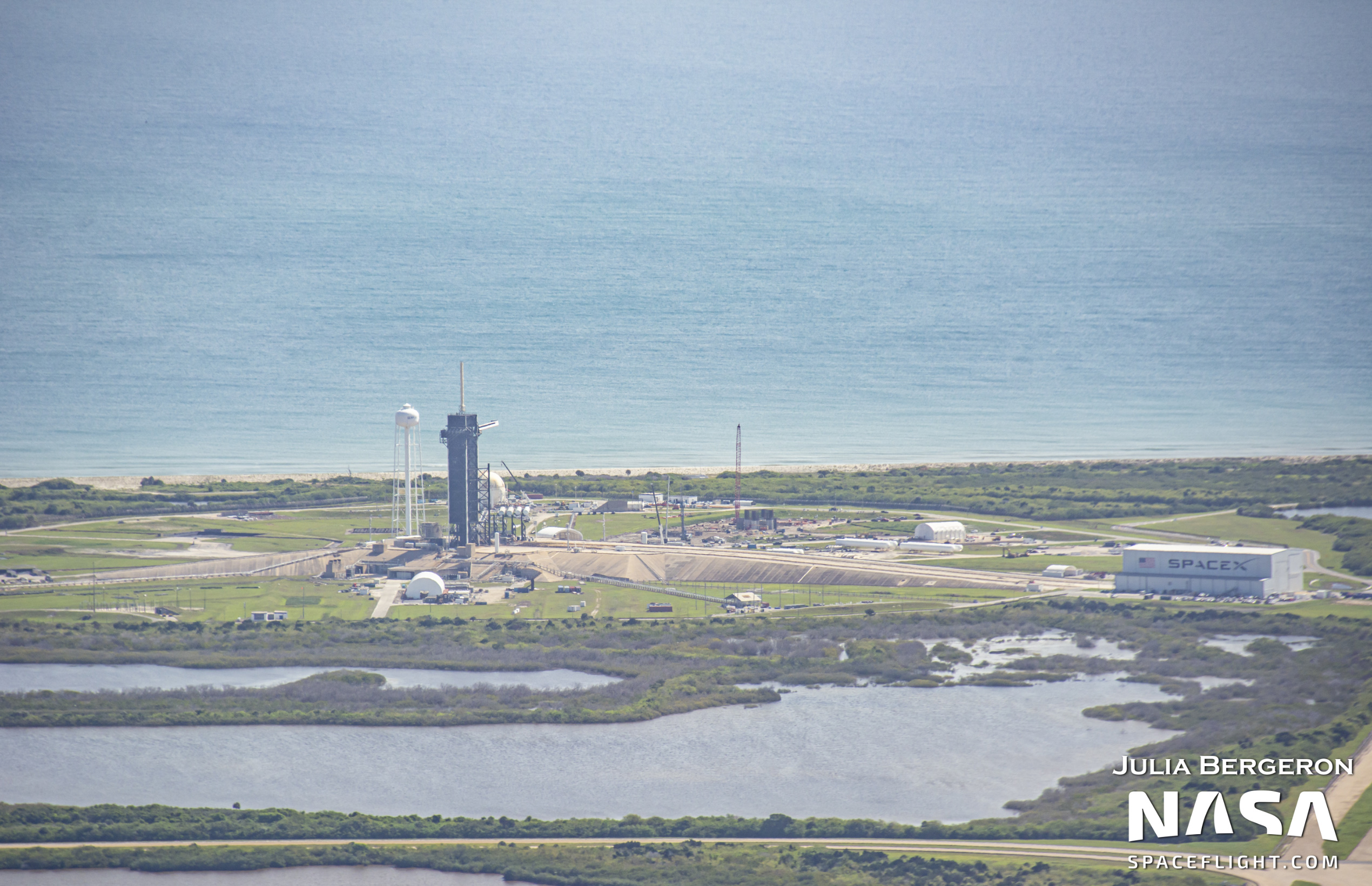 Starship Pad at 39A via Julia Bergeron for NSF L2

There has also been work done on the hydrogen storage sphere at the complex, likely to become part of future methane storage. There also appears to be a LOX tank farm being developed to support Starship operations at 39A.