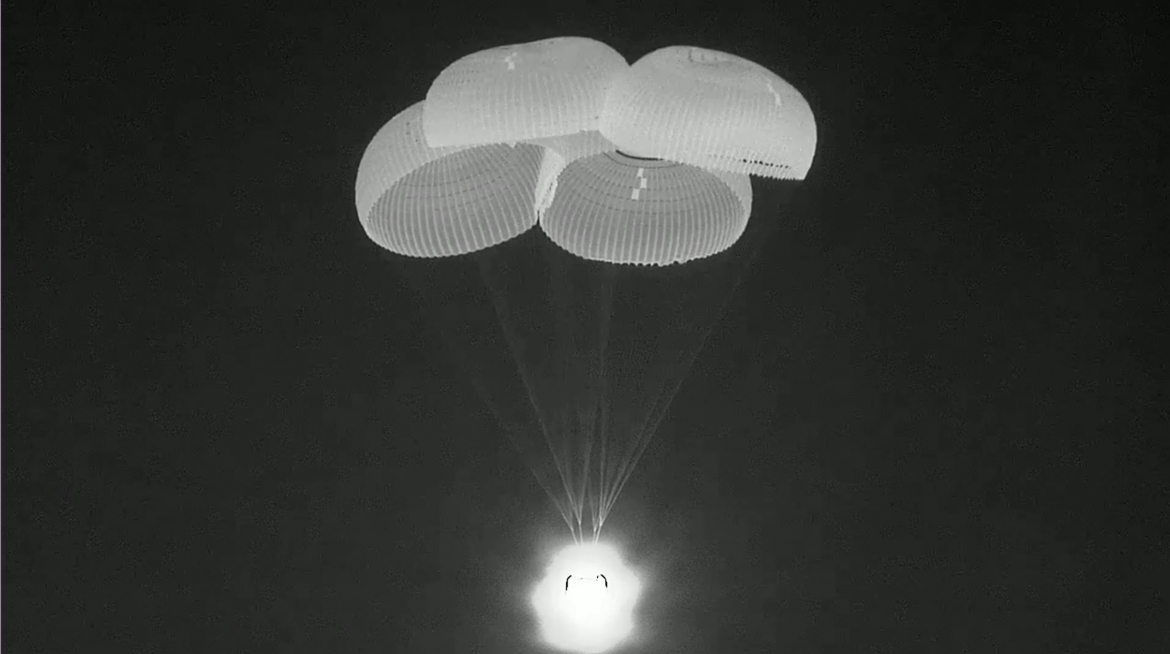 Endurance undocked from the forward-facing port of the station’s Harmony Module at 05:20 UTC (01:20AM EDT) on Thursday, before a splashdown on Friday at 04:43 UTC (00:43AM EDT) off the coast of Florida.

Launched on November 11, 2021, from historic Launch Complex 39A at the Kennedy Space Center, Crew-3 was the third operational Commercial Crew mission to the International Space Station to be flown by SpaceX. It was the first flight of the Crew Dragon Endurance.

The mission was commanded by NASA Astronaut Raja Chari, who along with mission specialist Kayla Barron, became the first astronauts of Group 22 (nicknamed The Turtles) to launch to the ISS. This was a swift mission assignment for the two astronauts after they graduated from NASA’s Astronaut Corps in 2020.

Also aboard Endurance was veteran NASA Astronaut Thomas Marshburn, who had already logged more than 146 days in space prior to Crew-3, and who completed his fifth spacewalk during the mission — bringing his total spacewalk time up to 31 hours. A physician who was selected as a NASA astronaut in 2004 as a part of Astronaut Group 19, Marshburn previously flew aboard Space Shuttle Endeavour during STS-127 and Soyuz TMA-07M as a part of the ISS Expedition 34 and 35 crews. 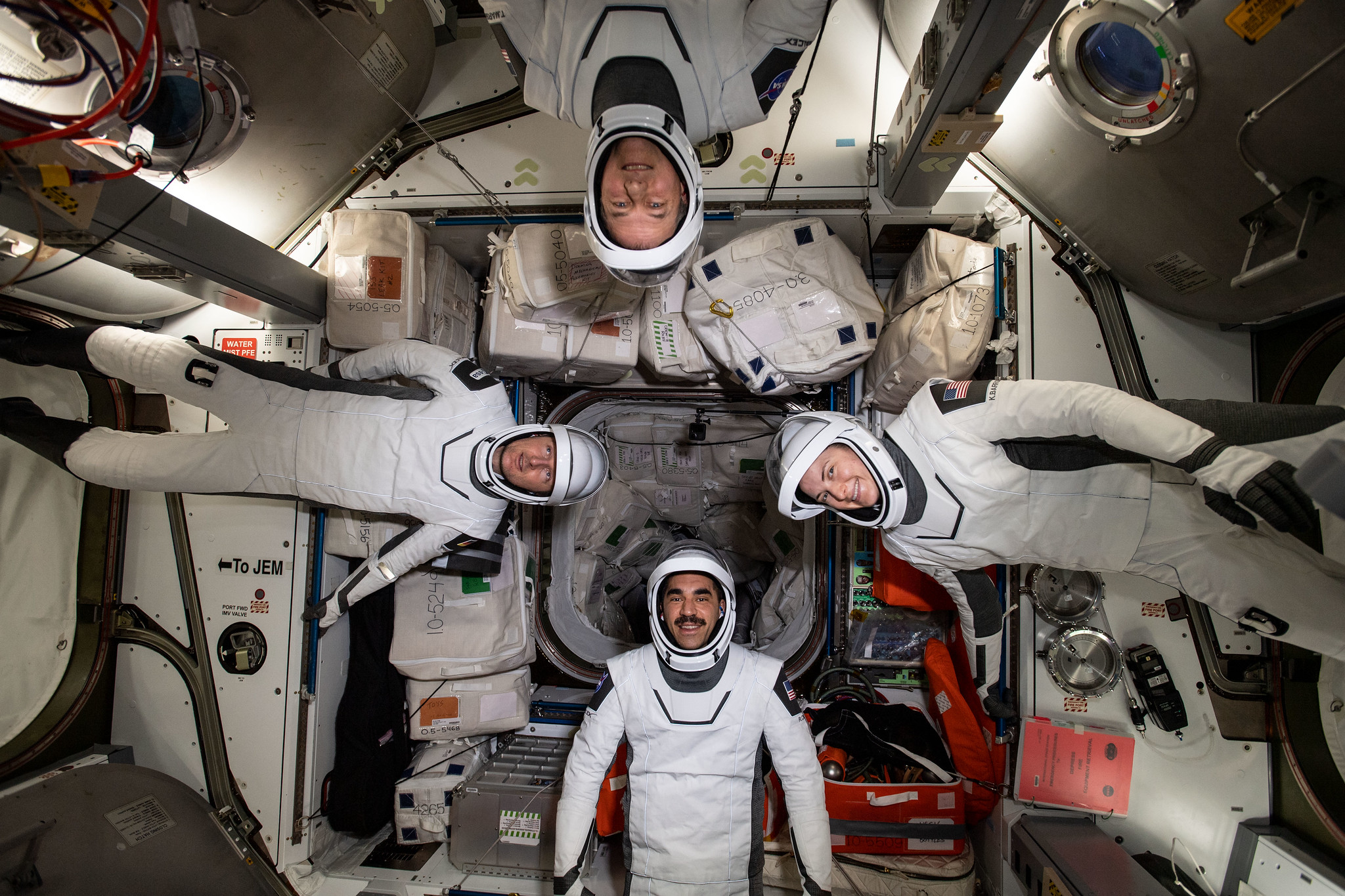 The Crew-3 astronauts during a fit check of their SpaceX spacesuits aboard the ISS (credit: NASA)

Endurance‘s crew was rounded out by another rookie astronaut, Matthias Maurer of the European Space Agency (ESA). The German was initially a crew support engineer for the Columbus module’s flight control team and later had a lead role in ESA Astronaut Centre projects before formally joining the European Astronaut Corps in July 2015. He is the second ESA astronaut to fly aboard Dragon, following Thomas Pesquet who flew to the ISS aboard the Crew-2 mission last year.

The Crew-3 astronauts served aboard the ISS as part of the Expedition 66 and Expedition 67 crew increments. Thomas Marshburn was a flight engineer for Expedition 66, taking over as the space station’s commander at the start of Expedition 67 in March. Before departing the orbiting laboratory, Marshburn handed over command of the station to Roscosmos Cosmonaut Oleg Artemyev during a traditional change of command ceremony on May 3.

Crew-3’s return to Earth came a few days after Dragon Freedom arrived at the space station on the Crew-4 mission, with four astronauts to join Expedition 67. By waiting until after Freedom‘s arrival for Endurance to depart, NASA was able to carry out a direct handover aboard the outpost.

Endurance docked to the ISS with over 180 kilograms (400 pounds) of supplies and hardware for the outpost. Over 70 kg (150 lb) of this cargo was comprised of research experiments to be carried out in the orbital laboratory. These included:

During their six months aboard the @Space_Station, #Crew3 contributed to hundreds of experiments to help improve life on Earth. Catch up on their scientific journey before their return to Earth: https://t.co/BUIGaO5rqg pic.twitter.com/wn1k8w81fb

NASA and SpaceX teams have designated seven splashdown zones for Crew Dragon. These include four in the Gulf of Mexico: Pensacola, Panama City, Tallahassee, and Tampa; and three in the Atlantic Ocean: Jacksonville, Daytona, and Cape North. Two weeks before the return, teams selected the primary and the alternate landing sites, pending weather conditions.

In addition to the seven designated splashdown sites, a backup unsupported landing site with suitable weather conditions is also identified to mitigate the risk of weather changes, and to ensure a minimum of two landing sites are identified at all times. In the unlikely scenario that it is required, responsibility for recovering Endurance and the Crew-3 astronauts will fall to the U.S. Department of Defense. 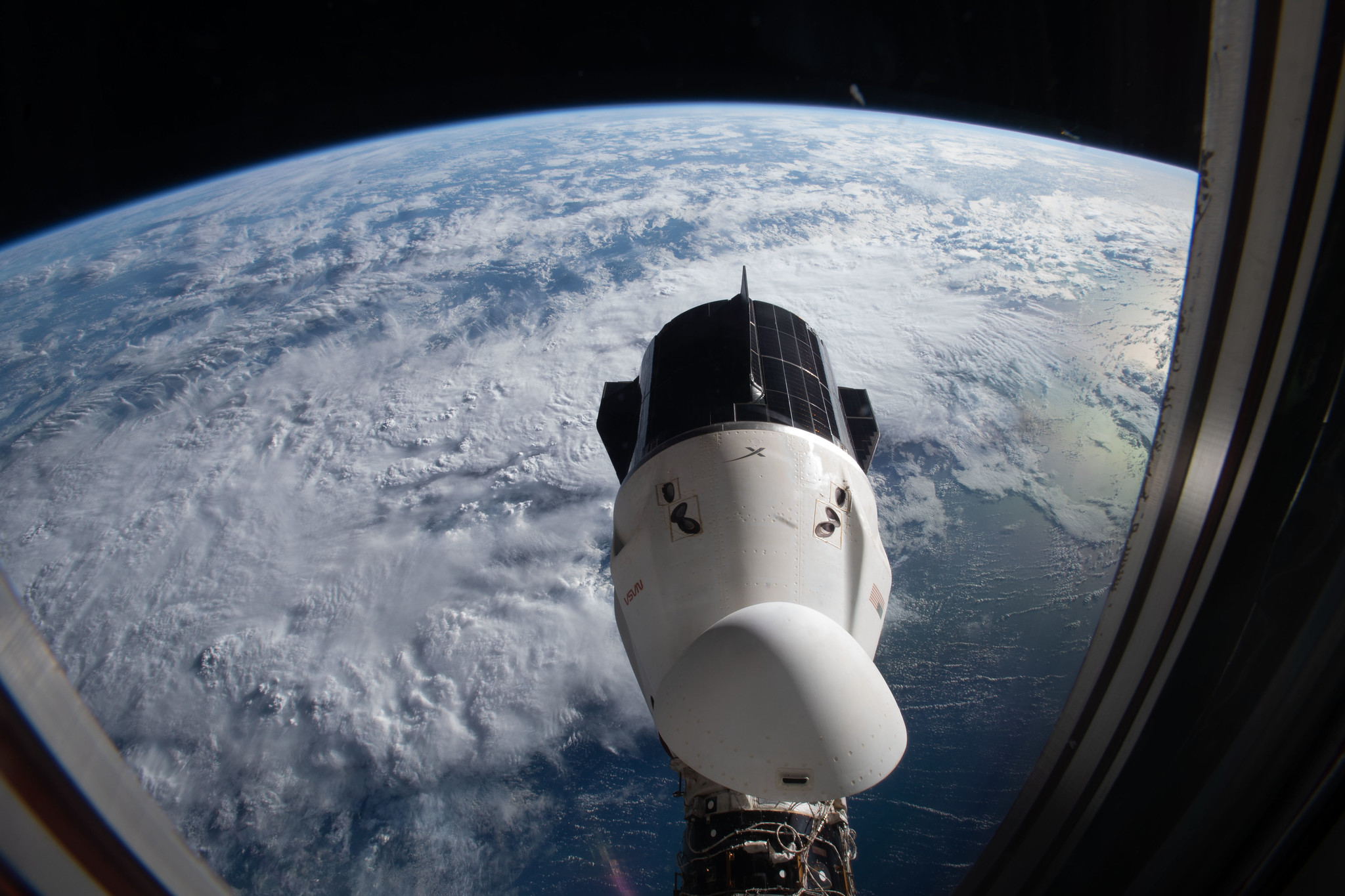 Endurance prior to its departure from the ISS (credit: NASA)

A final decision to depart the space station was made jointly by teams at SpaceX and NASA, about 48 hours before the planned splashdown based on the weather conditions of the landing sites. Additional weather briefings and go/no-go decisions take place as Endurance passes important milestones during the return flight.

Weather monitoring plays a crucial role in determining where and when Crew Dragon could return to Earth. About six hours before departure, NASA and SpaceX made the final decision on the primary splashdown target based on the latest weather updates. For the Crew-3 mission, the primary splashdown site was near Tampa.

SpaceX continued to monitor for any changes in conditions at the recovery site until about two and a half hours before the scheduled undocking. If conditions changed and were no longer acceptable for landing, SpaceX and NASA would have made a joint decision on whether to delay the crew’s departure.

Ahead of undocking, Tuesday saw the astronauts finish packing up their belongings and experiments, stowing them inside Endurance for the return to Earth. On Wednesday they said their goodbyes to the other members of Expedition 67 before boarding the Dragon capsule.

Completing Dragon suit checkouts & a view of our @SpaceX Crew Dragon capsule Endurance 🐉🚀 Soon it's time to head back to Earth & I'm looking forward to home, but also getting a bit wistful that it'll soon be time to say goodbye. #Crew3 #CosmicKiss pic.twitter.com/HTLA2J44uo

Dragon’s crew donned their SpaceX flight suits and closed the hatch between Endurance and the ISS, while the crew remaining aboard the space station closed the hatch on their side of the docking mechanisms. Once the Crew-3 astronauts had strapped themselves into their respective seats, depressurization of the vestibule — the narrow area between the hatches of the docking ports on the ISS and Dragon — could begin.

Mission control teams carried out a final go/no-go poll for undocking of Crew Dragon Endurance while the vestibule was being depressurized. With depressurization complete and flight controllers having verified that everything was “go,” Endurance undocked from the space station before performing the first in a series of short duration thruster firings to maneuver itself away from the ISS.

About two hours after undocking, Endurance performed the first of two long-duration in-orbit burns. This was the Departure Phase Burn, which significantly reduced the spacecraft’s orbital altitude. The second, the Prop Wasting Burn, is designed to expend surplus fuel, reducing Dragon to just the propellant levels needed to deorbit itself safely, while also lowering the orbit further in preparation for Trunk separation.

Dragon proceeded with these burns regardless of any late changes to weather conditions at its planned landing sites. This allows it to preserve the landing opportunity should they change again and become acceptable once more.

With this phase of the flight complete, controllers received another weather briefing for the landing sites. At this point, had conditions not be suitable for a landing attempt, they could take a decision to wave off the landing. In this scenario, Dragon would remain in orbit with further landing attempts possible 24-48 hours later. However, SpaceX and NASA teams proceeded with the deorbit sequence, starting with two important events which take place back to back.

At 03:47 UTC (11:47PM EDT), the Claw — which connects thermal control, power, and avionics system components located on the Trunk to the Dragon capsule — separated. Shortly afterward, the Trunk, which contains the Solar Panels and radiators for thermal control, was jettisoned. After separation, the Trunk will likely remain in orbit for well over a year before it decays from orbit naturally and is destroyed as it re-enters Earth’s atmosphere.

Endurance performed its final nine-minute-long deorbit burn at 03:53 UTC (11:53PM EDT), beginning the spacecraft’s descent towards Earth and its primary landing site off the coast of Tampa.

After the deorbit burn, Endurance’s protective nose cone — which covers the forward bulkhead thrusters, docking ring, and sensors crucial for autonomous approach and rendezvous — closed as the capsule prepared for its fiery atmospheric re-entry.

Dragon reentered the atmosphere, with a temporary loss of signal and communication from the craft as an envelope of ionized air forms around the spacecraft created by the extreme heat of reentry, when temperatures can rise to 1,930° C (3,500° F). 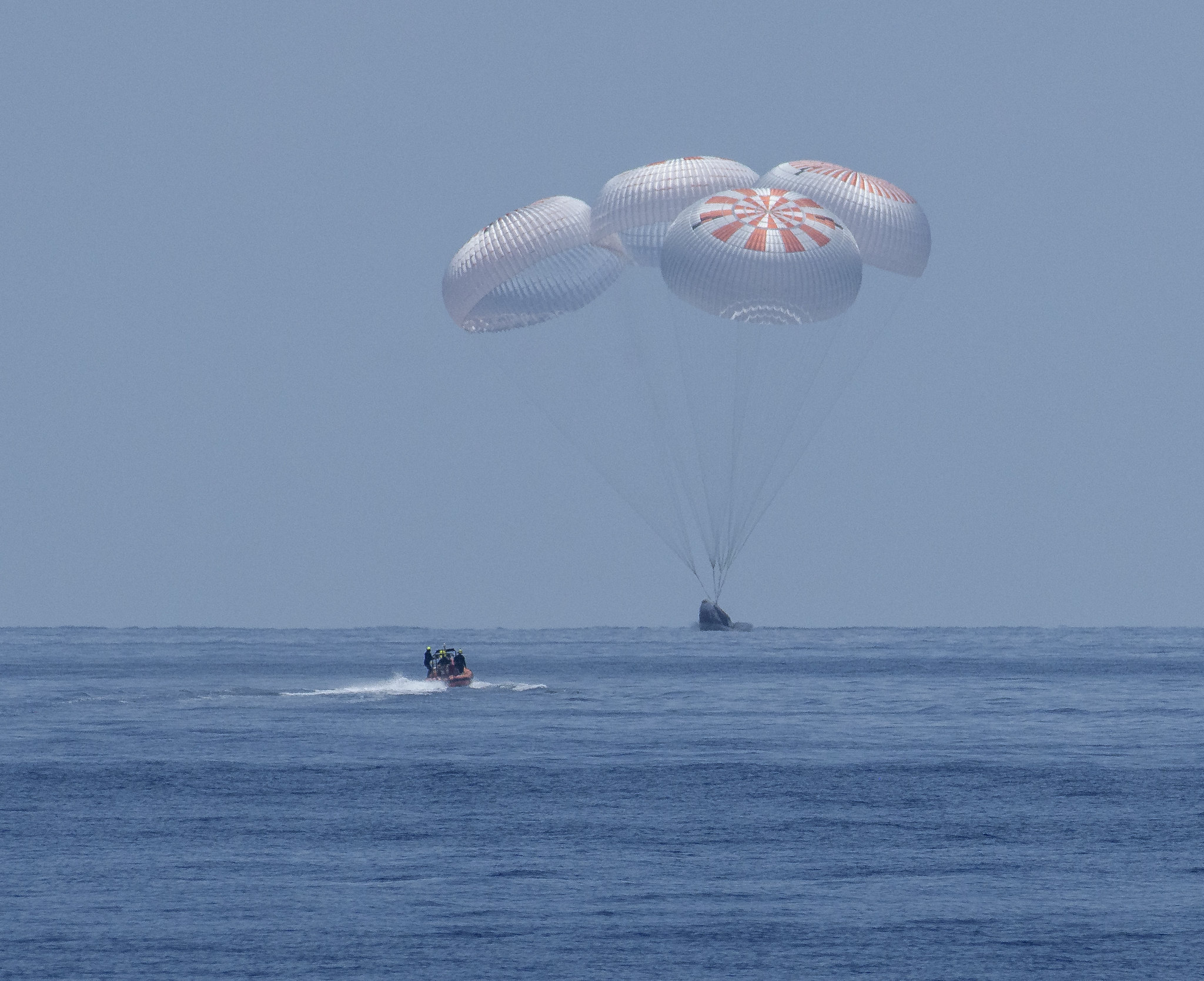 Communications were reestablished once Dragon passed through this phase of reentry. The next major milestone in its return was the deployment of its drogue parachutes, around 04:39 UTC (12:39AM EDT). These helped to slow the spacecraft down, with the drogues making way for the four main parachutes about 47 seconds later. At 04:43 UTC (12:43AM EDT), Endurance splashed down in the Gulf of Mexico.

Once the capsule was in the water, recovery forces descended on Endurance. Recovery operations were assisted by over forty trained NASA and SpaceX personnel, including spacecraft engineers, water recovery experts, medical professionals, the crew of the recovery ship crew, and NASA payload experts.

Endurance was winched aboard the SpaceX recovery ship, Megan, which was in position at the Tampa splashdown site. The astronauts will be assessed in a medical area on the recovery ship before they are returned to shore and subsequently flown back to Houston to begin post-flight activities.