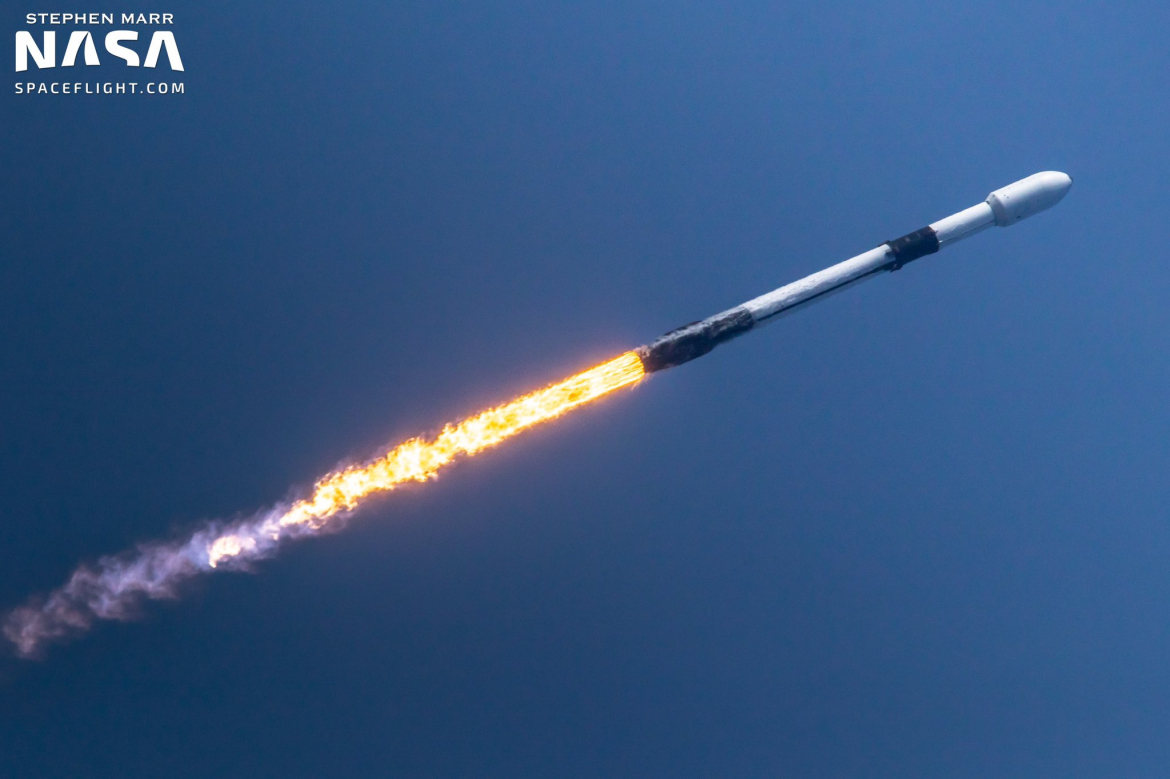 SpaceX launched its workhorse Falcon 9 rocket with the Nilesat-301 satellite into a geostationary transfer orbit (GTO) on Wednesday. Lifting off from Space Launch Complex 40 at the Cape Canaveral Space Force Station, Falcon 9 embarked on its first GTO mission of the year at 5:04 PM EDT (21:04 UTC).

Flying this mission was first stage booster B1062-7, making its seventh flight. After it completed its main task of lifting the second stage and payload out of the atmosphere, the booster landed on SpaceX’s drone ship Just Read the Instructions. B1062 was first launched as part of the GPS-III SV04 mission in November 2020; it has gone on to launch GSP-III SV05, Inspiration 4, Axiom-1, and two Starlink missions.

It is unknown if the fairings that protected Nilesat-301 during its ascent — and which will be recovered on this flight by SpaceX’s ship Bob — had flown on a previous Falcon 9 mission.

The single satellite payload on this mission is Nilesat-301, a multi-purpose broadcasting satellite owned and operated by the Egyptian company Nilesat. The 4,100-kilogram spacecraft was built by Thales Alenia Space in France and is based on their Spacebus 4000B2 satellite bus.

The satellite will operate in a geostationary orbit, occupying a slot at 7° West. From there, it will deliver television, radio, and internet to customers across North Africa and the Middle East. While it will be available to urban users, the internet service has a large focus on commercial and industrial use, such as in remote oil fields.

Nilesat-301 will work alongside and eventually replace its predecessor, Nilesat-201 — which is expected to be retired in 2028. The new satellite features more frequencies and will serve a larger area.

It will deliver Ka-band (26.5–40 gigahertz – portions of the 5G network operate in this frequency range) coverage to all of Egypt and Ku-band (12 to 18 gigahertz – most commonly used by communications satellites, by NASA for ISS and Tracking and Data Relay Satellite communications, by SpaceX for Starlink frequencies, and by law enforcement for radar traffic speed measurements) to the rest of its aforementioned service area.

The new satellite is expected to have a service life of over 15 years, which will begin once it raises itself into geostationary orbit and Thales Alenia Space completes all of its checkouts and tests of the craft. 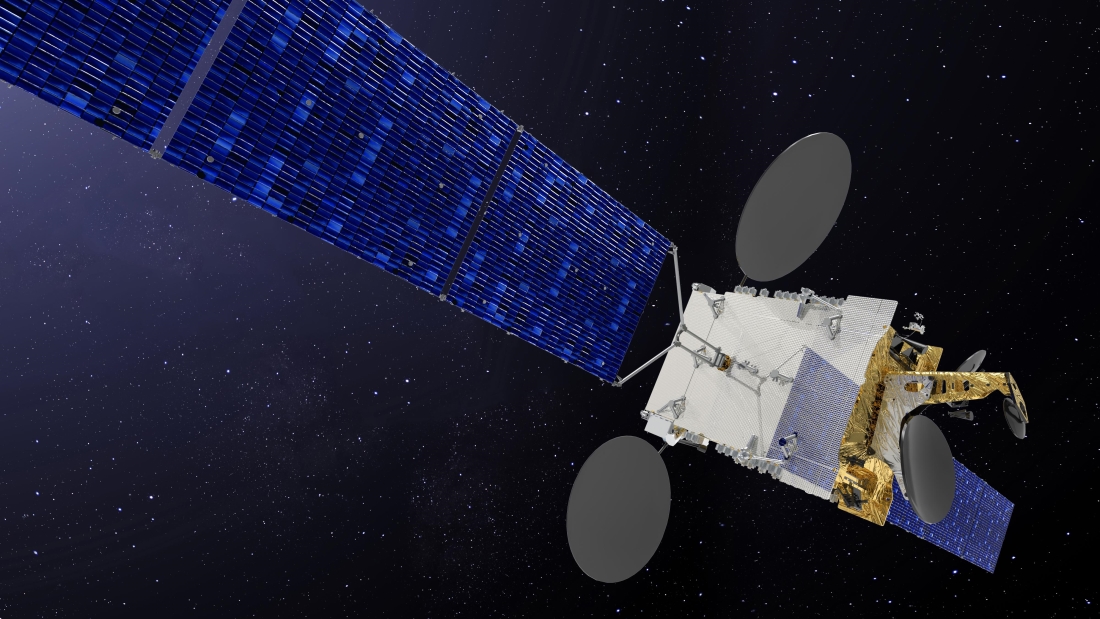 Nilesat-301 was delivered to Florida by sea, hitching a ride with SES-22 — which also will launch on a Falcon 9 later this month. This method of transportation is fairly slow and quite uncommon for spacecraft. Satellites are usually transported by plane — often by the large Antonov-124. However, many of these Ukraine-built planes are now being used for logistical purposes in the ongoing Russo-Ukrainian war, leaving them little time for other activities.

Falcon 9 will inject Nilesat-301 into a geostationary transfer orbit (GTO) — an orbit with a low perigee and high apogee. The satellite’s onboard propulsion will then be responsible for transiting to a geostationary orbit.

But before any orbital corrections are needed, Nilesat-301 needed to actually launch. 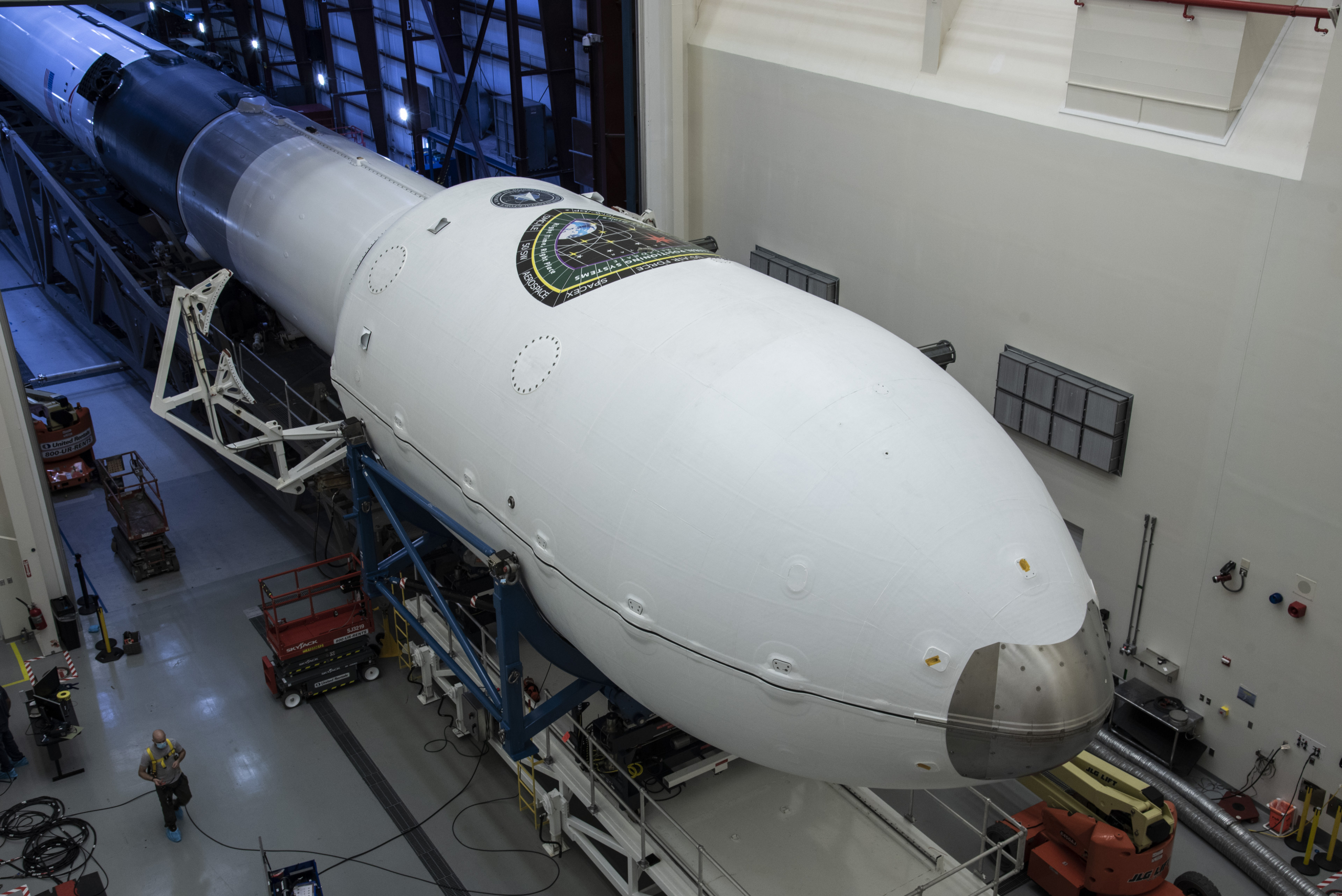 Falcon 9 residing in the Horizontal Integration Facility before rolling out for a previous mission. (Credit: SpaceX)

The day before launch, Falcon 9 rolled out from the Horizontal Integration Facility to the launch pad at Space Launch Complex 40 (SLC-40). It was raised vertical by the strongback and powered up. For this mission, SpaceX did not conduct a pre-launch static fire test, an event that is becoming rarer and rarer with each Falcon 9 launch campaign.

Assuming favorable weather, following polling of launch controllers, propellant loading on Falcon 9 began at T-35 minutes when chilled RP-1 fuel begins flowing onto both stages of the rocket. Liquid oxygen starts flowing into the first stage during this time as well.

Once propellant loading began, there was limited opportunity to hold the count and recycle due to the need to chill the propellants and keep them at the right density so that the correct amount needed for flight is properly loaded onto the vehicle.

At T-22 minutes, RP-1 loading into Stage 2 was completed and followed by the T-20 minute vent, when boiled off gaseous oxygen as well as gaseous nitrogen used to purge the Erector’s propellant lines as part of the switch between loading RP-1 and liquid oxygen into the second stage are vented away from the stack.

At T-16 minutes, liquid oxygen loading on to the second stage began.

Four minutes and 30 seconds before liftoff, the strongback retracted slightly away from the vehicle. At this point, the rocket’s tanks were partially pressurized to support their own weight without the need for the strongback.

At T-1 minute, the rocket’s flight computers took control of the countdown and Falcon 9 pressurized its tanks to flight levels.

The nine Merlin 1D engines on the first stage ignited at T-3 seconds, and — following an automated checkout of the engines — the vehicle was released from the pad at T0.

Falcon 9 followed an eastward trajectory for this mission, like all other GTO flights. Geostationary orbits have a zero-degree inclination relative to the equator, so SpaceX wants to send Falcon 9 directly east so as not to create any additional orbital inclination than the natural 28.6 degrees — the lowest possible inclination — achieved by going due east from the Cape during the initial ascent to orbit. 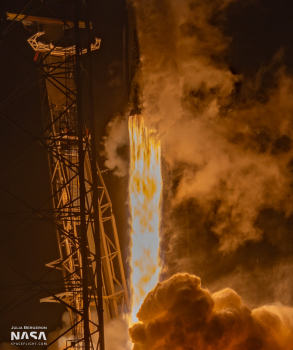 Falcon 9 seconds after lifting off on a previous mission. (Credit: Julia Bergeron for NSF)

Just over one minute into the flight, the vehicle passed through Max-Q, the moment of maximum aerodynamic pressure on the vehicle. As the name suggests, this is often one of the harshest moments of the ascent. To deal with the stresses, the first stage engines are throttled down momentarily for this period of flight.

Approximately two and a half minutes after liftoff, the first stage engines shut down in a process called Main Engine Cutoff (MECO). The two stages separated a few seconds later, followed by the ignition of the second stage’s Merlin Vacuum engine. Finally, the fairing will separate nearly a minute later. The two fairing halves parachuted into the Atlantic Ocean for recovery.

The second stage continued the primary mission, carrying Nilesat-301 to a parking orbit.

Meanwhile, the first stage reoriented itself and prepared for landing. It deployed its grid fins shortly after separation, and performed its three-engine entry burn around six and a half minutes after liftoff. This burn simultaneously slowed down the stage and actually uses the engine exhaust as a heat shield. This method — first investigated by NASA for potential use in Mars landings — is known as “supersonic retropropulsion.”

The exact timing of these burns can vary by a few seconds from pre-launch predictions based on day-of performance from the rocket engines.

The stage ignited its center Merlin engine for the landing burn around eight minutes and 19 seconds into flight. It deployed its landing legs and touched down on the drone ship Just Read the Instructions in the Atlantic Ocean. 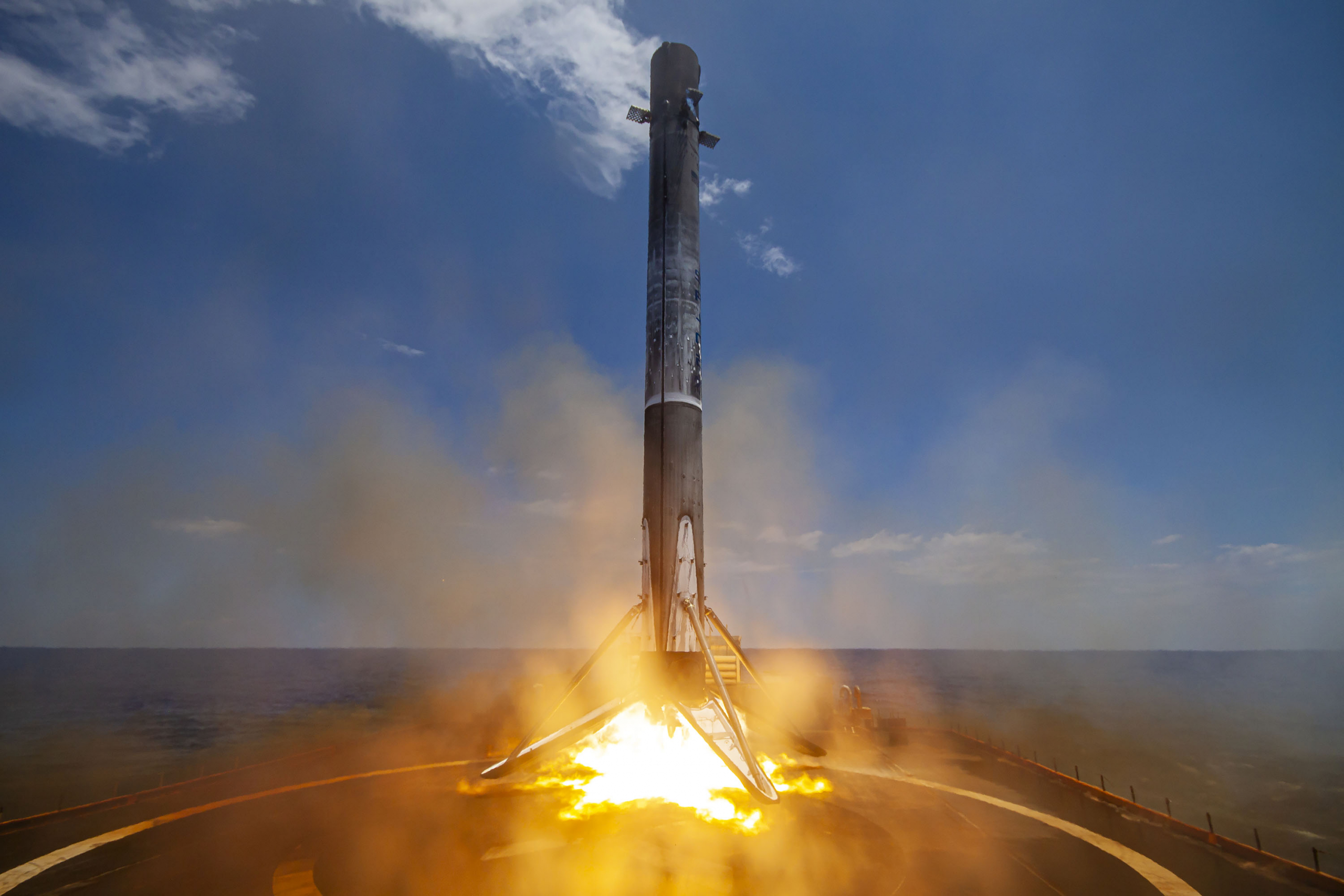 The second stage completed its first burn: an event that is designated Second Stage Engine Cutoff (SECO-1). After this, the stage coasted for a period of time before restarting its engine for an approximately one-minute burn, sending itself and the payload into a geostationary transfer orbit. The satellite will separate from the stage following this burn, beginning its months-long orbit raising and commissioning campaign.

The Nilesat-301 mission was SpaceX’s 23rd launch of 2022, in what is expected to be their busiest year yet. In fact, SpaceX may launch up to six additional Falcon 9 missions this month alone — but schedules can fluctuate.

One of these launches — which will be the next out of SLC-40 — is expected to carry an unknown payload that only recently appeared on permit filings. Its purpose, orbit, and customer are unclear, but it is potentially a highly classified government satellite — similar to the infamous Zuma.

NASA rolling Artemis 1 back to the pad to finish WDR