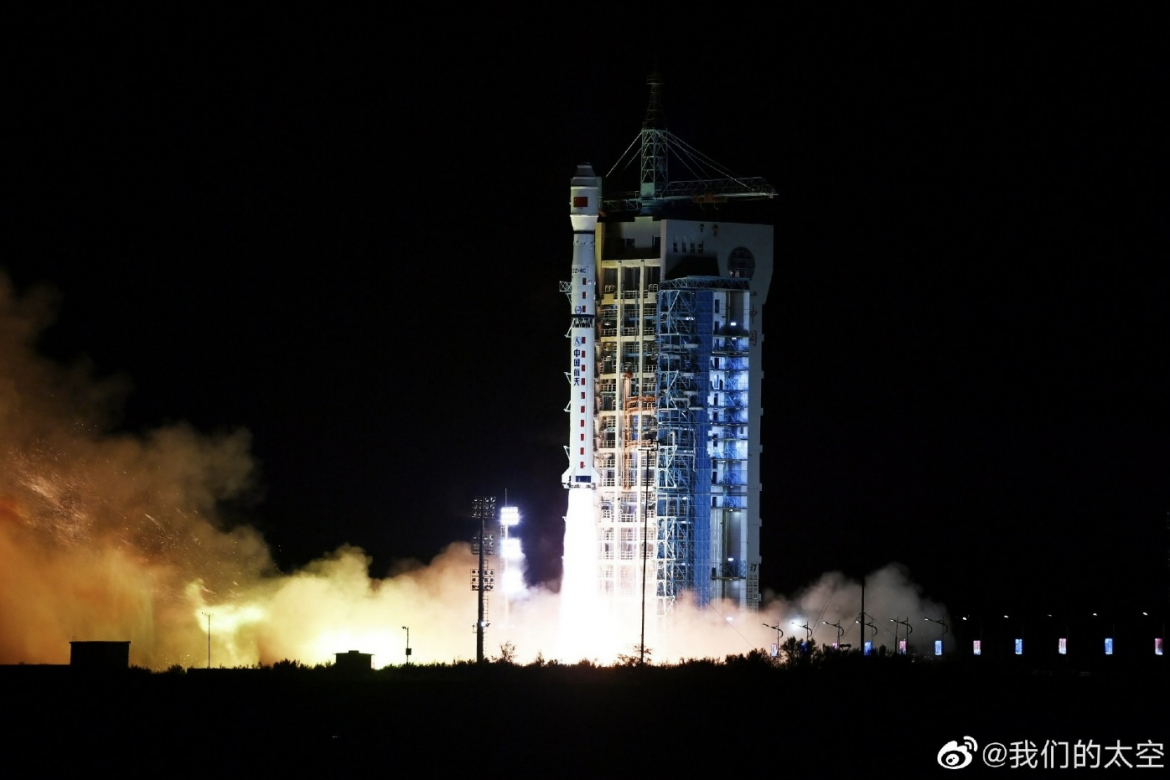 China launched the Gaofen-12 03 mission on board a Chang Zheng 4C today at 15:46 UTC. The launch occurred from the Jiuquan Satellite Launch Center (JSLC) in China and was confirmed to be a success minutes after liftoff. The satellite launched to a Sun-Synchronous Orbit (SSO).

Gaofen (meaning “high resolution”) is the name for remote sensing satellites that are part of the China High-definition Earth Observation System (CHEOS), which started in 2010 with the establishment of the Earth Observation System and Data Center of the China National Space Administration (EOSDC-CNSA). Originally the program was proposed in 2006 before being advanced to the full-scale program later.

The program covers weather, global surveillance, disaster protection, and monitoring, and uses all kinds of air and space vehicles to fulfill that goal, ranging from satellites, airships, and planes, to other observation vehicles.

In April 2013, the first Gaofen satellite launched on a Chang Zheng 2D. Since then, over 20 more satellites were launched on a variety of rockets. They are varying in size, orbit, and specific use case.

The last Gaofen mission was the 3-03 mission, also from Jiuquan, which launched in April 2022 on a CZ-4C as well.

For this mission, the payload is suspected to be radar imagery satellites, as both of its partners, 12A and 12B, had that suspicion as well.

The first Gaofen 12 launched in November 2019 from the Taiyuan Satellite Launch Center in Shanxi and used the same rocket configuration as today’s launch. It was confirmed a successful mission.

The second Gaofen 12 launched in March 2021 from the JSLC on board a CZ-4C as well. Back then, the function of the satellite was given as “land census, urban planning, land right disputes, road network design, crop estimation, and disaster prevention”, however, with Chinese missions it is never clear if there is not another purpose of a satellite, that is hidden with these texts.

Video of the 22nd Chinese satellite launch of the year, exactly half of which originates from Jiuquan SLC – though of these 11 many were micro satellite launches (Electron/Pegasus class)! pic.twitter.com/dq1LNj6Yz9

All Gaofen 12 satellites are equipped with microwave high-resolution sensing systems on a sub-meter level. The weight and size of the payloads are not specified.

As the launch vehicle, Chang Zheng 4C (also known as Long March 4C) was used. It is a 45.8 meters tall and 3.35 meters wide launch vehicle with a liftoff mass of about 250,000 kg. It consists of three stages.

The CZ-4C can bring up to 4,200 kg into Low Earth Orbit (LEO) and 2,800 kg into SSO. So far it launched 44 times with 42 of these being successful. It has launched for the sixth time already in 2022, making it the second most flown rocket configuration in the world this year so far, behind the far-and-away leader of the SpaceX Falcon 9.

For the first stage, the rocket has a mass of 182,000 kg, which mostly consists of fuel and oxidizer. This is of course dinitrogen tetroxide and unsymmetrical dimethylhydrazine, as it is in every early Chang Zheng rocket, such as CZ-2 and CZ-3.

The second stage is 10.9 meters long and features the same diameter as the first stage. It also uses the same propellant combination and has a single YF-24C module installed for propulsion. 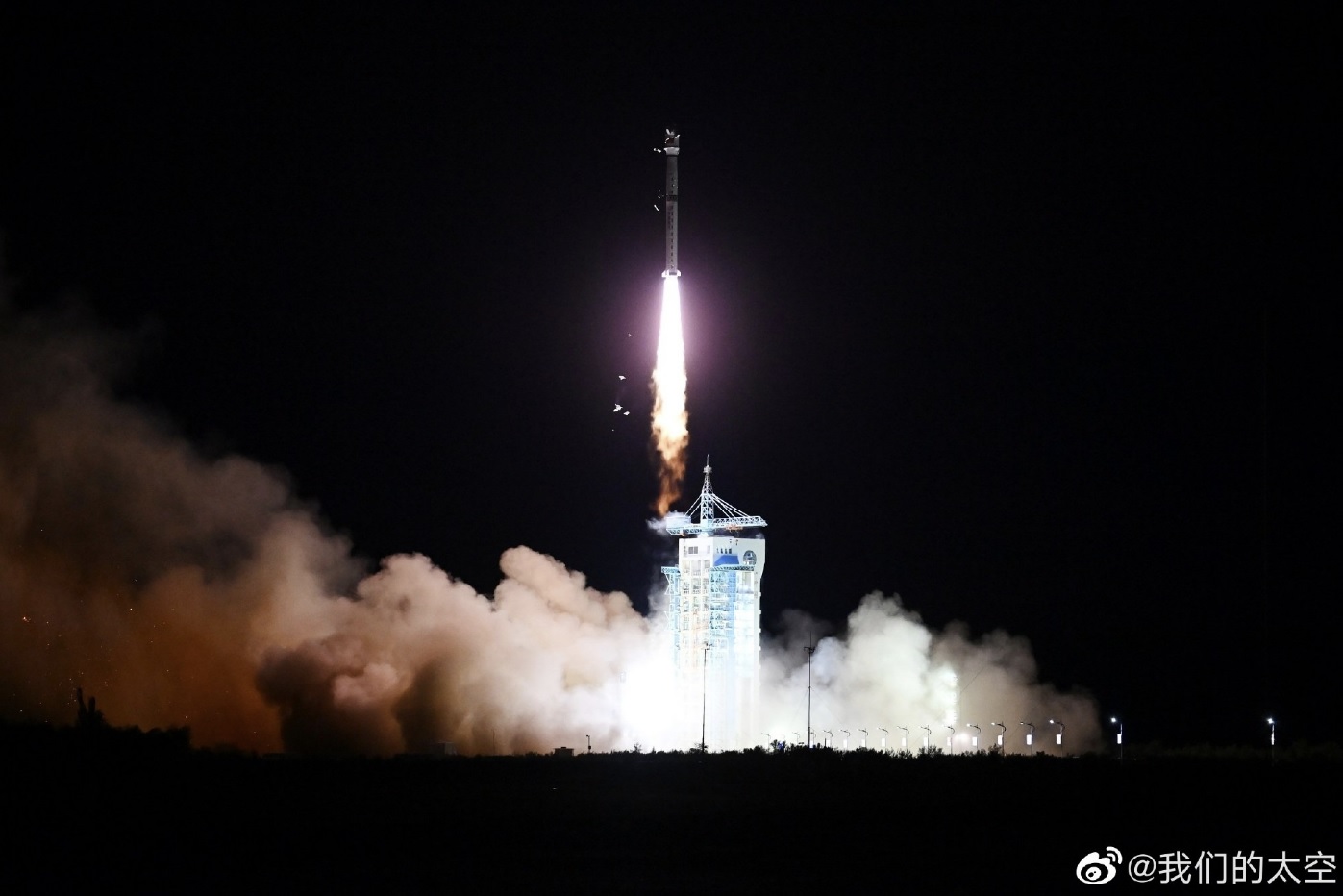 Insulation panels fall from CZ-4C’s payload fairing, as planned, as the rocket climbs from Jiuquan

This module consists of a single YF-22C engine with a thrust of 742.04 kN, and four YF-23C vernier engines that allow the second stage to steer in space. The four vernier thrusters feature 47.1 kN of thrust each and run on the same fuel as the main engine. This kind of module is very commonly used on Chinese rockets.

With the last stage, the diameter shrinks to 2.9 meters. It has a length of 14.79 meters and runs on a single YF-40 engine. This engine has a high specific impulse of 412 seconds and provides 100 kN of thrust during the final stages of the flight. It is used to accurately place the payloads in orbit.

After the third stage is done with its job, the rocket released the Gaofen satellite in its desired SSO orbit, which will allow the satellite to have consistent light conditions over the day.

The launch today was conducted from the JSLC, China’s oldest spaceport. It is in the Gansu Province and features a lot of launches from private and governmental rockets, including CZ-2/CZ-4 and CZ-11.

Compared to modern spaceports, such as Wenchang, this is inland, so during the launch it can endanger populated areas. In the past, China experimented with using grid fins on some rockets to steer the rocket on its way down, but it seems that this never was fully implemented, or has not reached every rocket design.

Overall, this was the 22nd launch from China this year, of which 21 were successful.