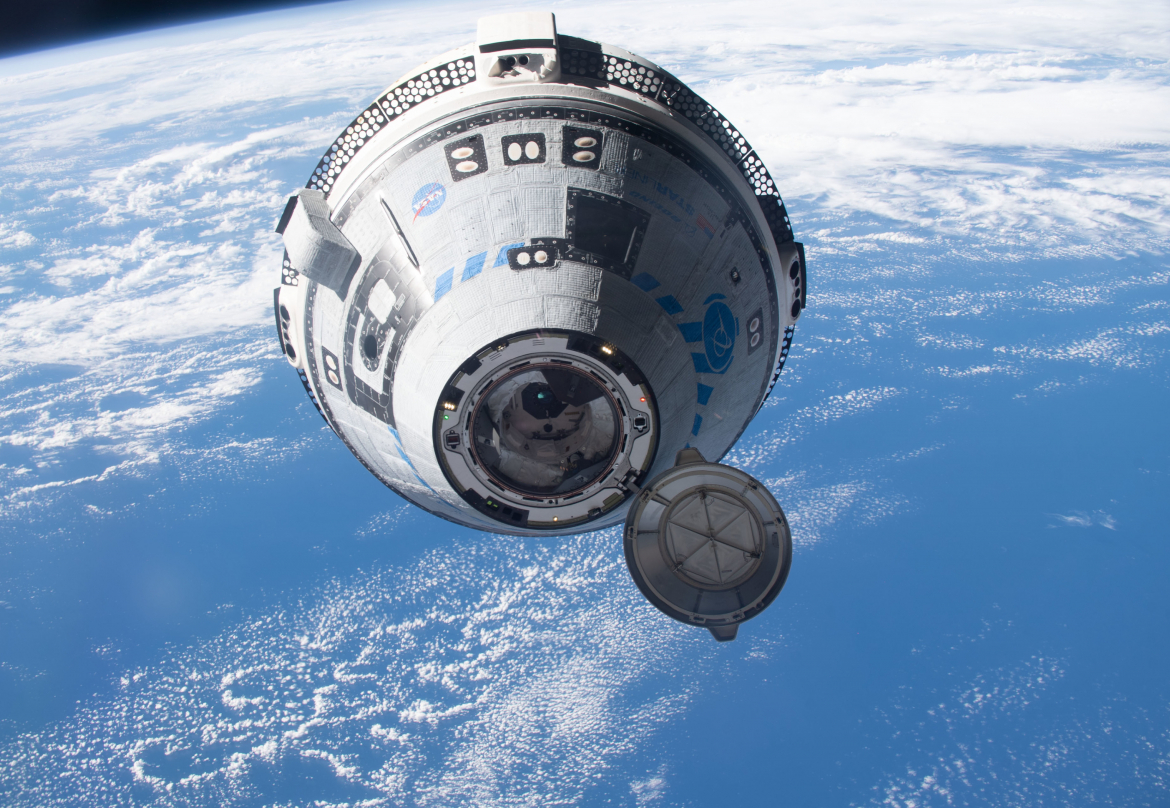 May 2022 was an eventful and important month for the future of the International Space Station as well as the Commercial Crew program designed to support it. The astronauts of the SpaceX Crew-3 mission returned to Earth aboard Crew Dragon Endurance after handing over operations to the recently arrived Crew-4 members. Also, the Boeing Starliner made its long-awaited first arrival at ISS.

NASA is looking at extending the station program to 2030, while the ISS crewmembers worked their usual experiment and maintenance activities, even as geopolitical tensions intensified on the ground.

While the Crew-4 astronauts were familiarizing themselves with the space station and collecting baseline data on themselves for human research programs, Crew-3 packed up the Crew Dragon Endurance for the trip home with experiment samples and other cargo. 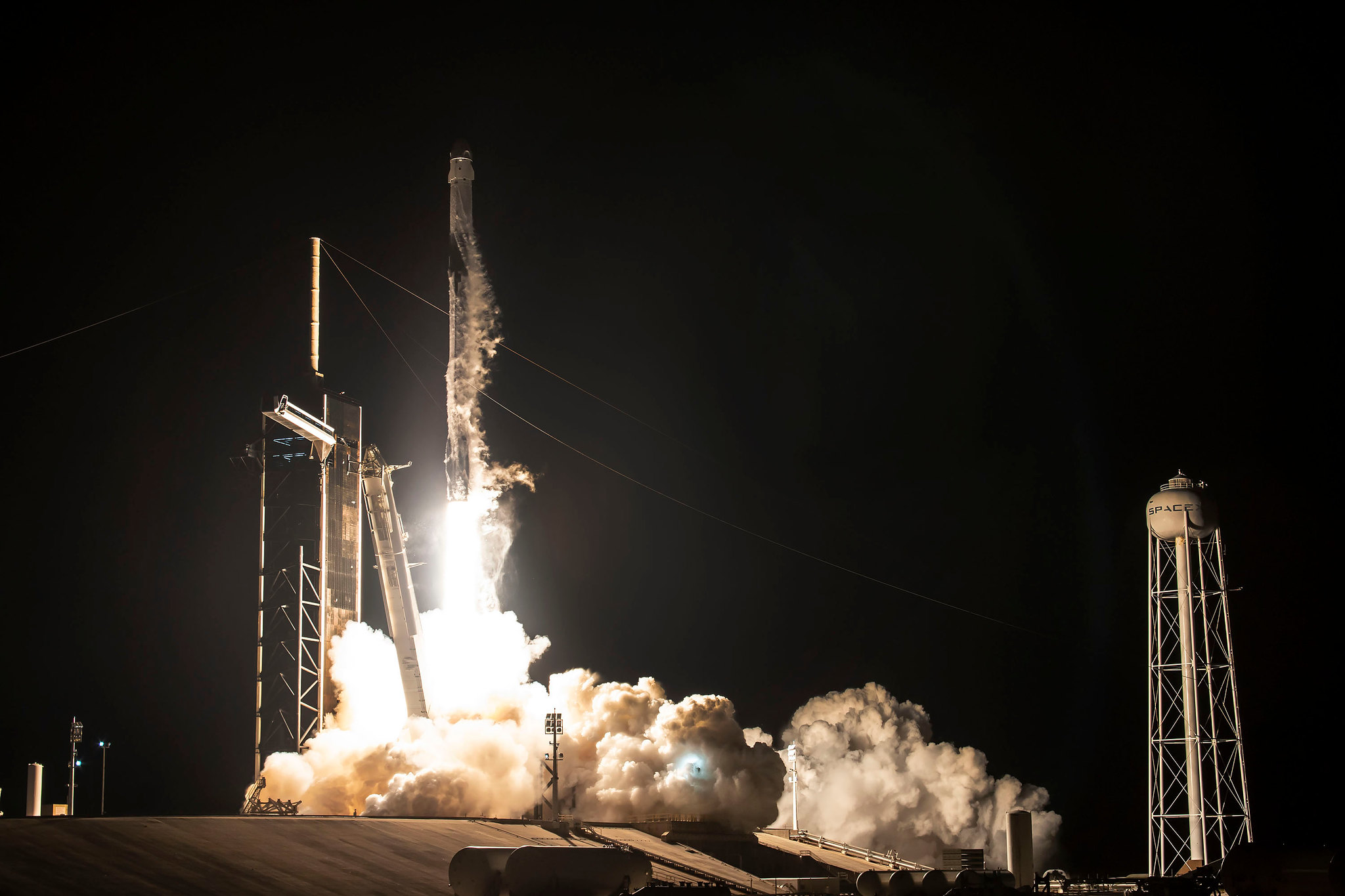 The day before Crew-3’s departure featured the traditional change of command ceremony, as outgoing ISS commander Tom Marshburn handed over the station to Russian cosmonaut Oleg Artemyev, who came aboard ISS on Soyuz MS-21 in March. Artemyev, a veteran of three space flights, will command the station and the Expedition 67 crew until this fall.

Crew Dragon Endurance successfully re-entered Earth’s atmosphere. It splashed down in the Gulf of Mexico west of Tampa, Florida during the very early morning hours of May 6. The Crew-3 astronauts were quickly transported to Houston while time-sensitive cargo was offloaded during the spacecraft’s first hours back on Earth.

The Crew-4 astronauts settled into life aboard the station. They began preparing for the arrival of the Boeing Starliner spacecraft on its critical Orbital Flight Test-2 mission. At the same time, they conducted their usual daily routine of photography, experiments, and maintenance tasks interspersed with public affairs and ham radio events. 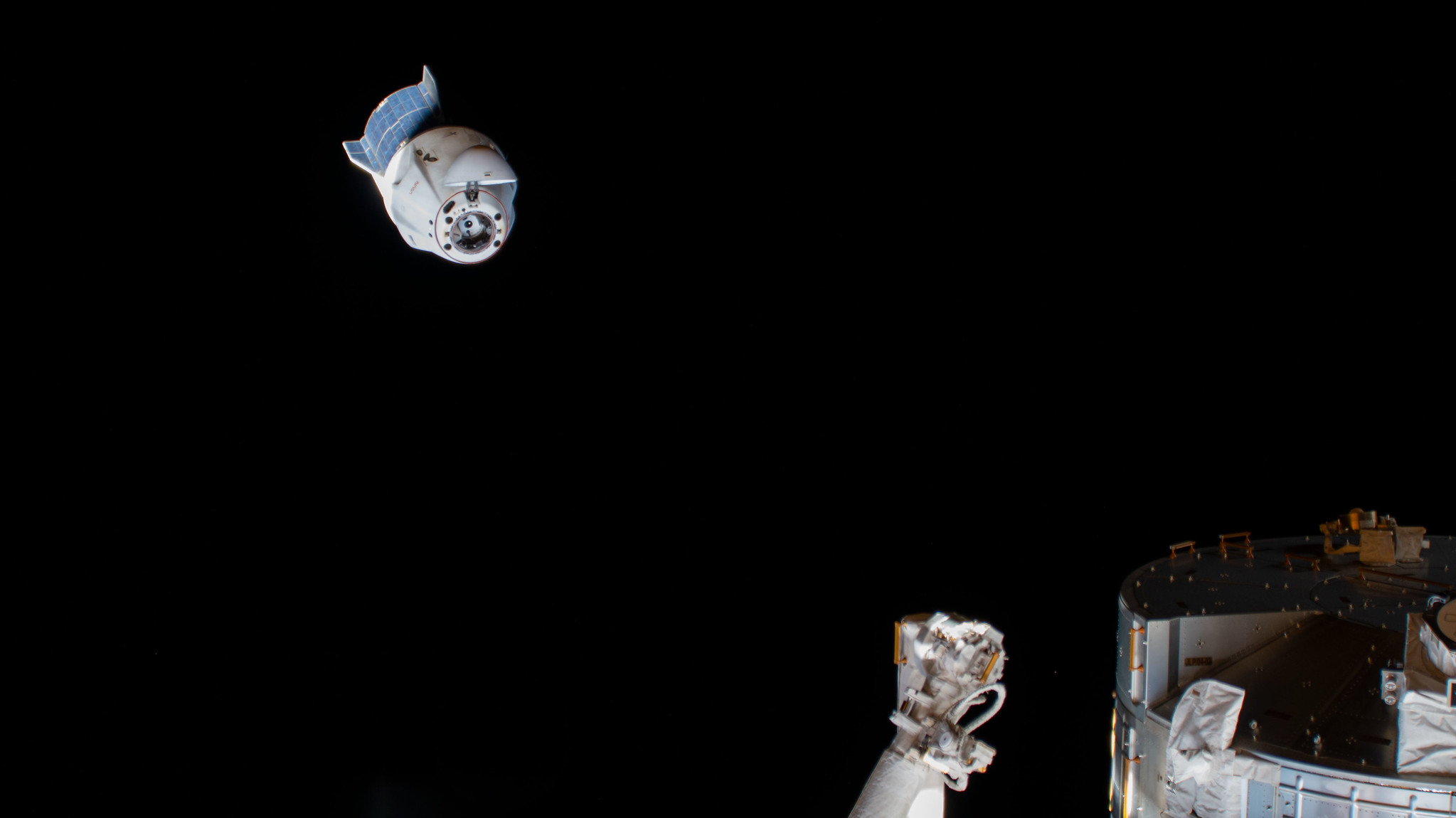 In mid-May, before the Starliner OFT-2 flight, the astronauts had to work through an issue that kept the Waste and Hygiene compartment – the US segment’s toilet facility – out of action for two days – and successfully brought it back online on May 14. The WHC issue was caused by the cap gasket blocking the flow path at the connector from the pre-treat tank after preventive maintenance was performed on May 12.

The astronauts also needed to work with the exercise devices. They performed the six-month and yearly maintenance tasks for Treadmill 2 including inspecting hoses, the umbilical panel, bungee shackle key mount witness marks, tread belt slats and screws, vacuumed inside the rack, and greasing the axles. The ARED resistance exercise device also had various issues during the month that needed work, including frayed ropes and a cable coming out of its detent.

On the Russian segment, the three Soyuz MS-21 cosmonauts (Denis Matveev, Oleg Artemyev, and Sergey Korsakov) continued working through an issue with attaching one of the European Robotic Arm (ERA)’s endpoints to the Base Arm Attachment Point 3 mounted on the Nauka module. The ERA unsuccessfully tried to latch onto the attachment point on May 5 and had to move to a “park” position while specialists on the ground worked on analysis and a forward plan to proceed.

Also on the Russian segment, the Progress MS-18 spacecraft performed an 11-minute, 25-second reboost burn on Saturday, May 14, to set the ISS up for Progress MS-20’s arrival on June 3. The burn’s total velocity change was 1.1 meters per second.

At 6:54 PM EDT (22:54 UTC) on May 19, the Boeing Starliner, also known as the CST-100, launched to the International Space Station atop an Atlas V N22 on the long-delayed and very important uncrewed Orbital Test Flight-2 mission. Unlike Starliner’s previous flight in December 2019, the craft was cleared to proceed to the station after entering a good orbit with its OMACS thrusters. 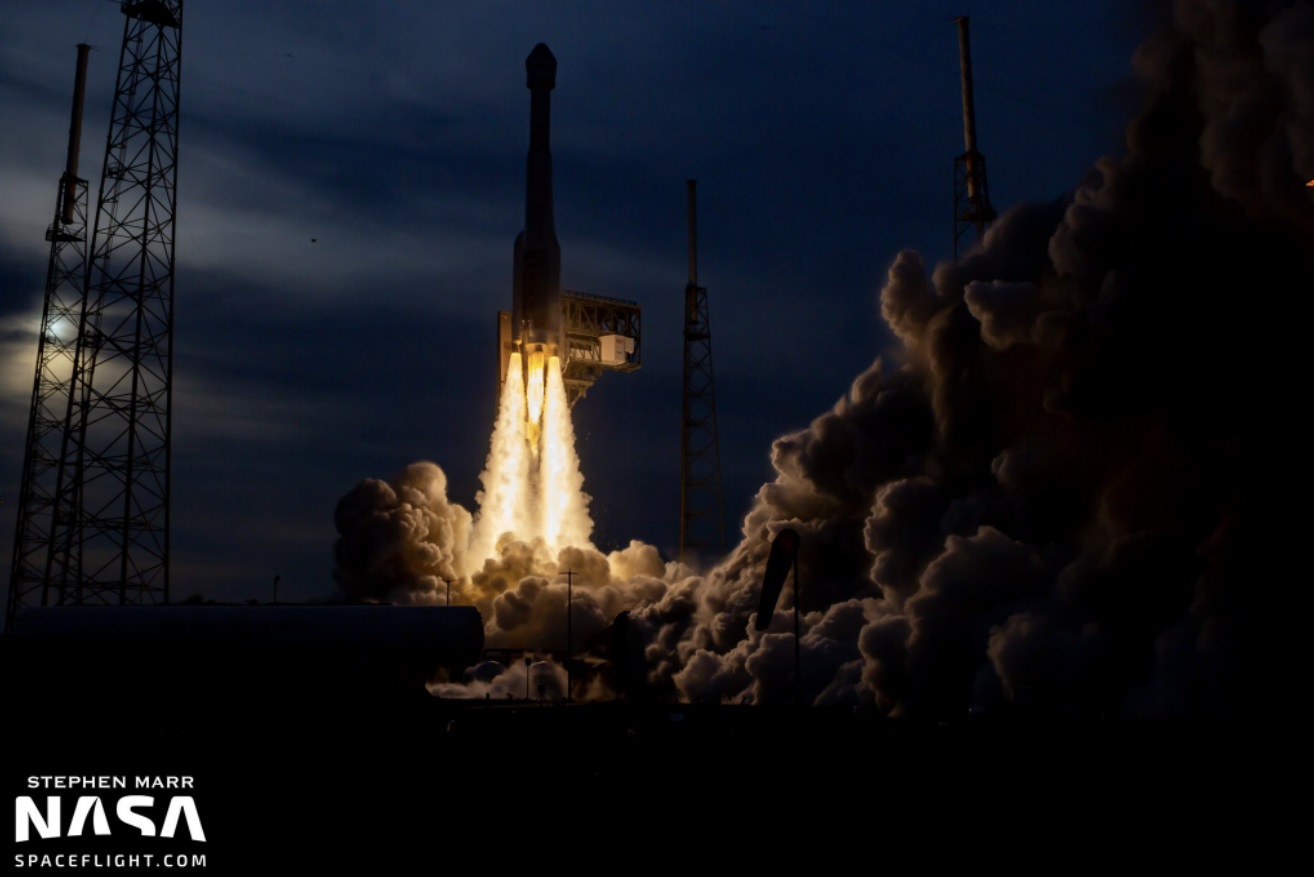 Remote photo of the launch of OFT-2 to the ISS. (Credit: Stephen Marr for NSF)

Despite issues with two OMACS thrusters and moisture in the cooling loops of the spacecraft, Starliner completed its rendezvous with ISS. Docking had to be delayed due to an issue with the spacecraft’s docking system’s deployment, but controllers on the ground rebooted it. After redeployment, the system worked successfully, enabling the spacecraft’s first-ever docking at ISS.

The Starliner docked at the Pressurized Mating Adapter-2 (PMA-2) on the forward port of the Harmony (Node 2) module at the ISS on May 20 at 8:28 PM EDT (00:28 UTC May 21) after a day-long journey to the station and a series of tests along the way that ensured Starliner could approach and dock safely with ISS.

The Starliner, after its successful hard mate to the docking port mounted onto the Shuttle-era PMA-2, stayed undisturbed until the next day when astronauts Kjell Lindgren and Bob Hines prepared to enter the crew module. The module contained five hundred pounds of cargo, mainly food and non-critical items, while the “Rosie the Rocketeer” manikin and a Jebediah Kerman plush “zero-g indicator” were also aboard the spacecraft.

At 12:04 PM EDT (16:04 UTC) on May 21, astronauts opened up the hatch to Starliner. Lindgren and Hines entered the spacecraft, wearing masks as a precaution against floating dust and debris that could have entered the spacecraft during ground processing. They were able to take off the masks after finding the air in Starliner was free of contaminants.

It’s wonderful to see astronauts inside the #Starliner spacecraft @Space_Station for the first time! Great job to the @NASA & @BoeingSpace teams that worked so diligently to make this a reality. It’s a thrilling moment for a new spacecraft that is getting ready to fly crew. pic.twitter.com/FACWHsSHwi

Starliner was placed in quiescent mode while the Expedition 67 crew continued to work on their experiment and maintenance schedule for the next few days. Being in quiescent mode is key for the spacecraft being able to support a six-month-long rotation at the ISS, and the capability was one of many tested on Starliner during OFT-2.

After nearly five days docked to ISS, Starliner successfully undocked on May 25. The spacecraft backed away from the station and departed its vicinity while controllers on the ground prepared it for the critical deorbit burn and reentry before a land landing at White Sands, New Mexico.

Starliner successfully deorbited using the remaining OMAC thrusters at 6:05 PM EDT (22:05 UTC) with a one-minute burn. The spacecraft reentered the atmosphere near Baja California before touching down on its deployed airbags, underneath three good parachutes, at 6:49 PM EDT (22:49 UTC) on the evening of May 25.

Before Starliner left the ISS, the Expedition 67 crew loaded it with six hundred pounds of return cargo, including three Nitrogen Oxygen Recharge System tanks that provide breathable air to the ISS. These tanks will be refurbished and reflown back to ISS on a future flight. The reentry and landing went well, with the only concern being the failure of a pair of RCS thrusters on the crew module. Other thrusters on the module worked to stabilize the spacecraft. 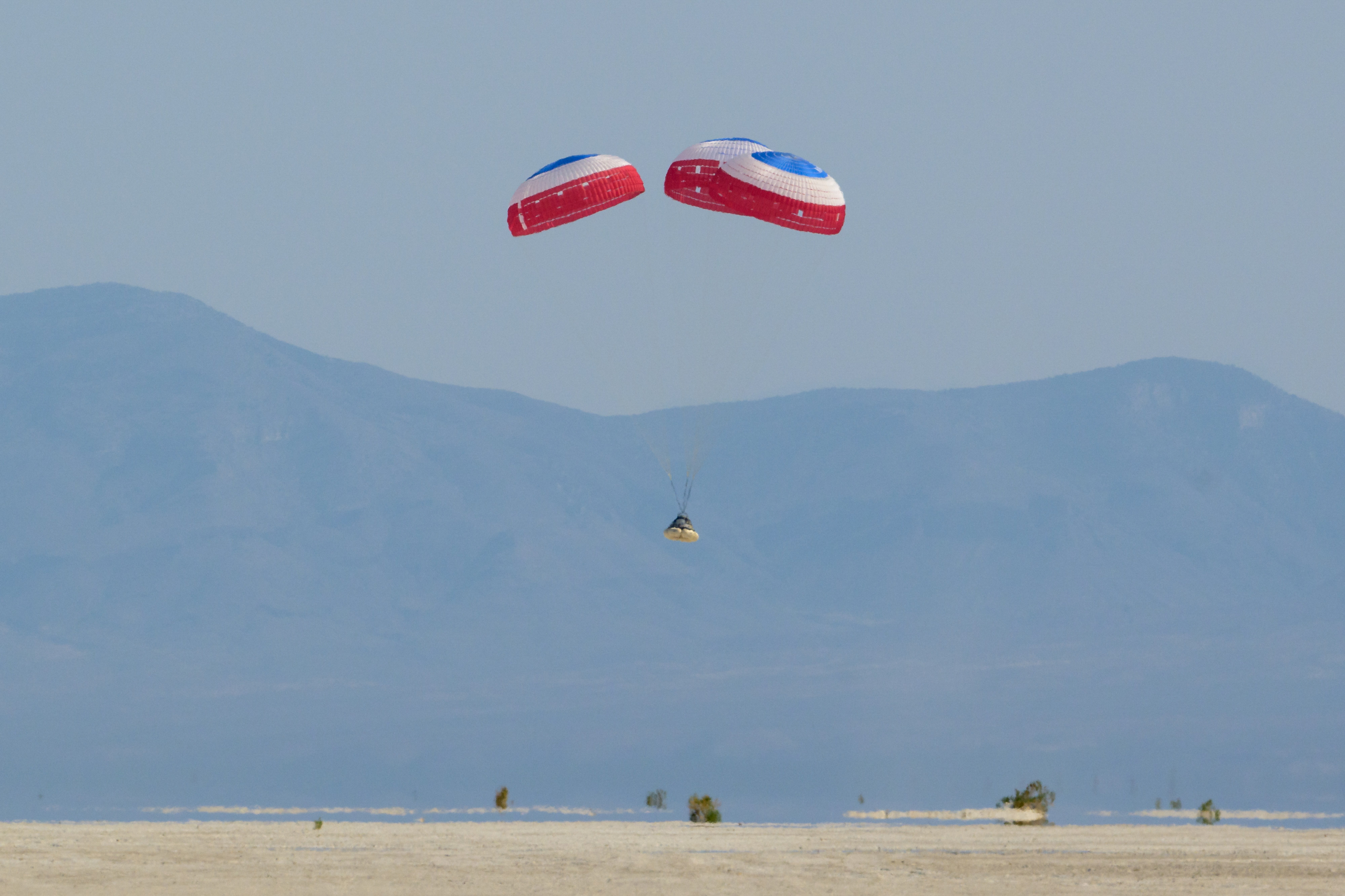 Boeing and NASA officials celebrated the success of the OFT-2 flight and stated that there was no reason they could not proceed to the CFT crewed demonstration flight, which NASA is currently aiming for at the end of the year.

However, the spacecraft’s overall performance, as well as the issues that did show up on the OFT-2 flight, such as the cooling loop and thruster issues, will be reviewed before any approval is given to proceed. CFT crew naming is not expected until later this summer, and officials have stated they are several months away from any decision regarding the CFT approval and launch date.

Starliner would join the SpaceX Crew Dragon as a spacecraft that would launch crews from to ISS from the US, and it offers a critical backup capability for NASA crew transport should any issue result in a grounding of the Crew Dragon or the Falcon 9 launch vehicle for any length of time. The only other crew capability to ISS at this time is through the Russian Soyuz spacecraft and launch vehicle operated from Baikonur Cosmodrome in Kazakhstan.

During the month of May, several experiments that could prove important for future crewed space missions, as well as future enhancements for life on Earth, were performed aboard the orbiting complex.

The ongoing Vascular Aging investigation found that life in microgravity can accelerate aging-like changes in arteries and found these changes in many ISS crewmembers. There is also emerging data that shows a link with cardiovascular disease risk, carotid artery aging, insulin resistance, bone metabolism and blood biomarkers, and radiation. Astronauts undergo artery ultrasounds and blood sampling and have their wearable sensors analyzed, among other measures, to gather more information.

The XROOTS (eXposed Root On-Orbit Test System) tested ways to grow plants without soil or other growth media, using hydroponic and aeroponic technologies. Astronauts worked with this experiment for much of May, though issues with microbial growth on two cartridges meant those cartridges needed to be disposed. It is hoped that this experiment results in ways to grow larger crops for longer space missions. 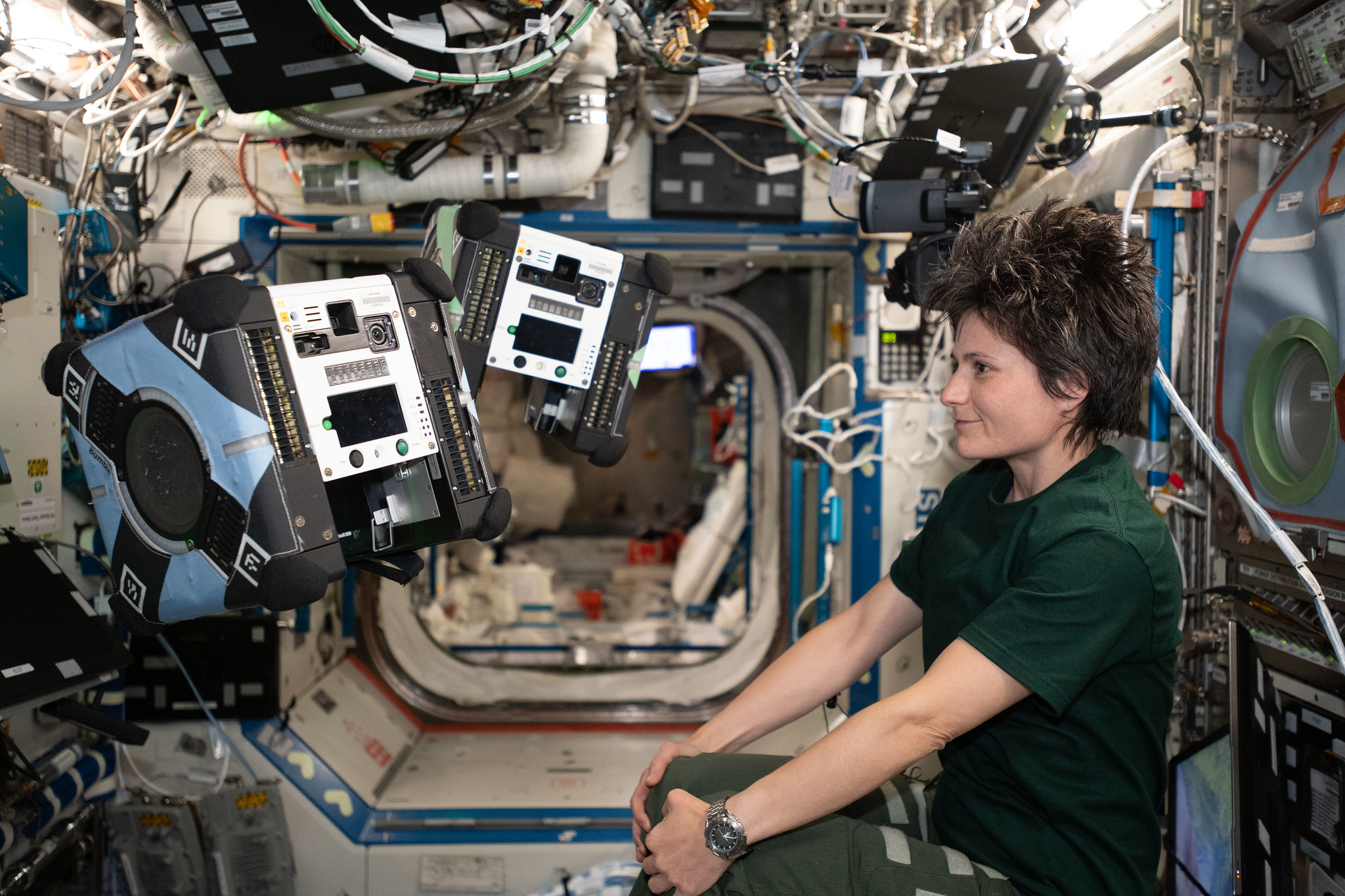 The Astrobee experiment, meanwhile, featuring three cube-shaped free-flying robots, was also tested in May. The autonomous robots, using fans as propulsion as well as vision-based navigation, can be used to monitor astronauts and to give mission control eyes and ears inside the station. They can also be used to assist astronauts in tasks and conduct sampling activities.

Other experiments that crewmembers worked on during the month included an experiment with nutrition monitoring (NutrISS), the Cold Atom Lab that can produce clouds of atoms chilled to about one ten-billionth of a degree above absolute zero, two augmented Raspberry Pi computers with visible or infrared cameras that can monitor the ISS environment and movement through space, as well as crystal growth in transparent liquids and many other experiments.

The Expedition 67 crew also assisted with the investigation into the US EVA-80 anomaly that happened on March 23, when Matthias Maurer’s spacesuit leaked water which ended up covering 30-50% of his faceplate. The pad that had been placed in the spacesuit in the wake of Luca Parmitano’s close call in 2013 was found to be damp.

EVAs from the US segment have been suspended until the investigation is complete and the issue(s) that caused the water leak has been resolved. On May 26, the crew ran tests on the EMU helmet to examine how water forms inside to try to find the origin of the leak.