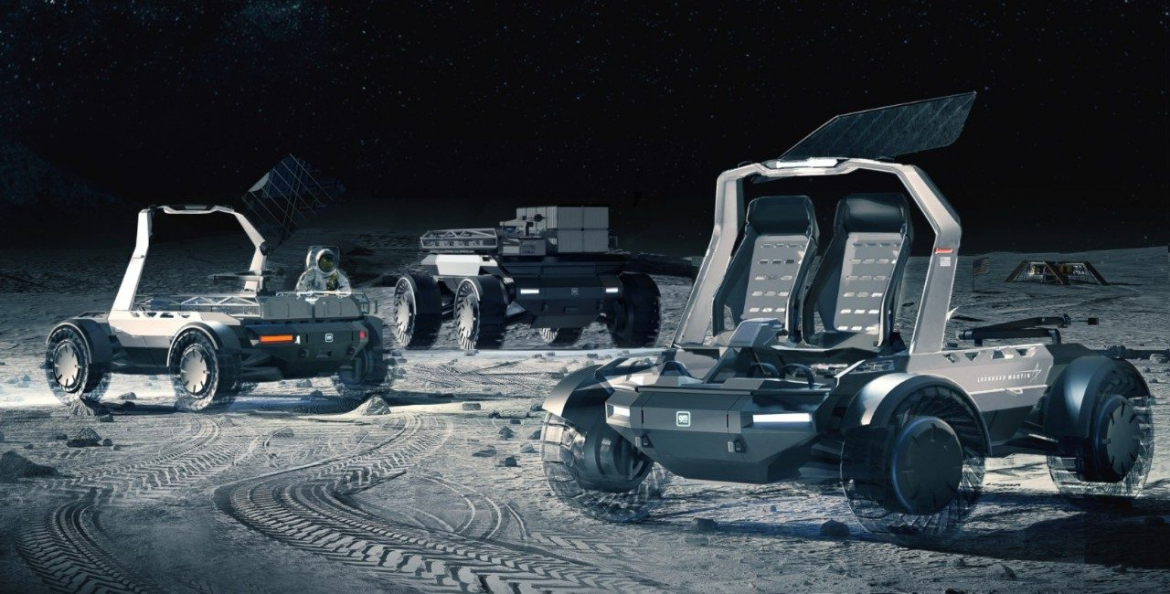 With over 21 years of service onboard the International Space Station, Canadarm2, along with Dextre and the OBSS (Orbiter Boom Sensor System), has served as a mission-critical tool in support of the construction of the orbital outpost and its ongoing maintenance.

Now, as Canadarm’s developer, MDA, works toward developing Canadarm3 for the Lunar Gateway, the company is also looking closely at the Moon via a partnership with Lockheed Martin and General Motors to provide robotics for a new, large lunar rover — a commercial spinoff of the still-under-development Canadarm3 robotic advancements.

“MDA joining the industrial partnership is really an iconic moment for us,” said Holly Johnson, Vice President of Robotics and Space Operations, MDA. “We’re leveraging the Canadarm space technology, which just stands on its own in terms of what it has enabled in human spaceflight and space exploration over the past many decades.”

“Leveraging that and creating commercial spinoffs [for the lunar surface] right on the heels of the development of Canadarm3 is an exciting partnership for us with Lockheed Martin and General Motors where we really feel that creating this basic infrastructure and establishing the [commercial] infrastructure of mobility on the Moon is something that will enable not only government missions.”

So what is this arm in MDA’s partnership with Lockheed Martin and General Motors and how does it relate to the ongoing MDA initiatives with Canadarm3 and the Canadian Space Agency’s LEAP (Lunar Exploration Acceleration Program) rover?

The concept for the new and large Lunar Terrain Vehicle involves a robotic arm 2.5 meters in length that features numerous internal control systems and software leveraged from Canadarm, Canadarm2, Dextre, the OBSS, and Canadarm3.

Moreover, the arm has to be both controllable by astronauts using the rover as well as completely autonomous to support operations when astronauts are not present.

“When you think about robotic systems in space that have proven to be very safe interacting with astronauts, that’s a pretty key requirement. And that’s something that we can leverage because we’ve done that so frequently, and we’re experts in the field,” noted Johnson.

“The architecture of control and operation is still in development,” related Johnson. “So the teams right now are doing an optimization strategy. We’re going to create a framework that will assess the level of autonomy required.”

“If there’s a relatively simple task that can be done with prepared interfaces that’s repeatable in a constrained environment, that leads you to one direction.” 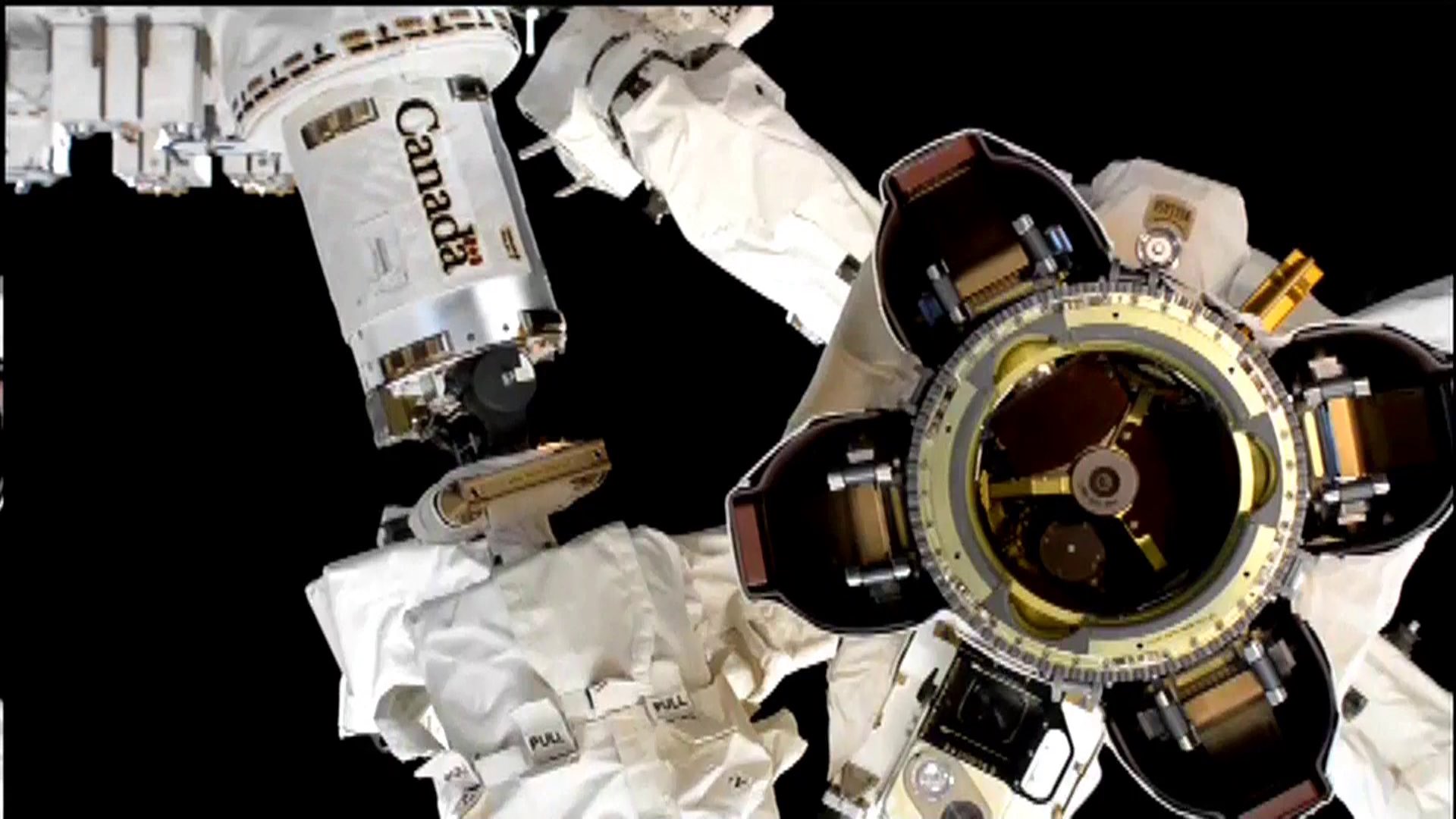 One of Dextre’s Latching End Effectors (or “hands”) used to grab hold of various objections on the Station. This is a view captured by a Station camera operated by the Communications RF Onboard Networks Utilization Specialist (CRONUS). (Credit: CSA/NASA)

“If there’s a more complex task, whether humans are involved or not, that may lead you to another direction.”

And all of that knowledge and ability stems from the long history of MDA space robotics, specifically the control and operational software developed, tested, and implemented over decades across the various arms used on NASA and NASA-led programs.

“When you look at the types of operations that Canadarm2 performs today compared to what it was originally designed to do, we’ve really evolved the operational modes,” noted Johnson. “We’ve evolved the types of tasks that it can do. And really that’s leveraging the control base and the software base that the teams have built up.”

What’s more, MDA has incorporated some of the enhancements being designed for and used on Canadarm3 for the upcoming Lunar Gateway outpost in the new Lunar Terrain Vehicle with Lockheed Martin and General Motors.

This represents a direct commercial application of Canadarm3 technology… while Canadarm3’s own development is ongoing.

Drawing on Shuttle/Station history, @MDA_space has begun development of #Canadarm3 for #Gateway. As initial requirements are set, the company is also working parallel developing of new commercial space robotics.

“This is really exciting!” related Johnson. And Canadarm3’s software isn’t the only area where it could — and likely will — assist MDA’s other commercial robot arm offerings.

AI will play a key role as well.

“As we look at Canadarm3, which [will be] 1,000 times further away from Earth than Canadarm2, the need to adapt autonomy and artificial intelligence for that system to understand its environment, make real-time decisions, execute on tasks from a higher level command, and then navigate different scenarios… that’s critical,” said Johnson.

“And in some cases, there may be decision making that it can do. In other cases, it might pause and wait to hear back from Earth.”

That AI is directly applicable to an autonomous lunar rover arm’s need to assess the local area so that it can pick up or interact with a target without bumping into other objects or being confused by a shadow on the lunar surface.

But that brings up another question: What will the end effector — the hands, so to speak — of this lunar rover arm look like when it might have to pick up rocks on Monday and then need to use a scientific tool to investigate a different rock on Tuesday? 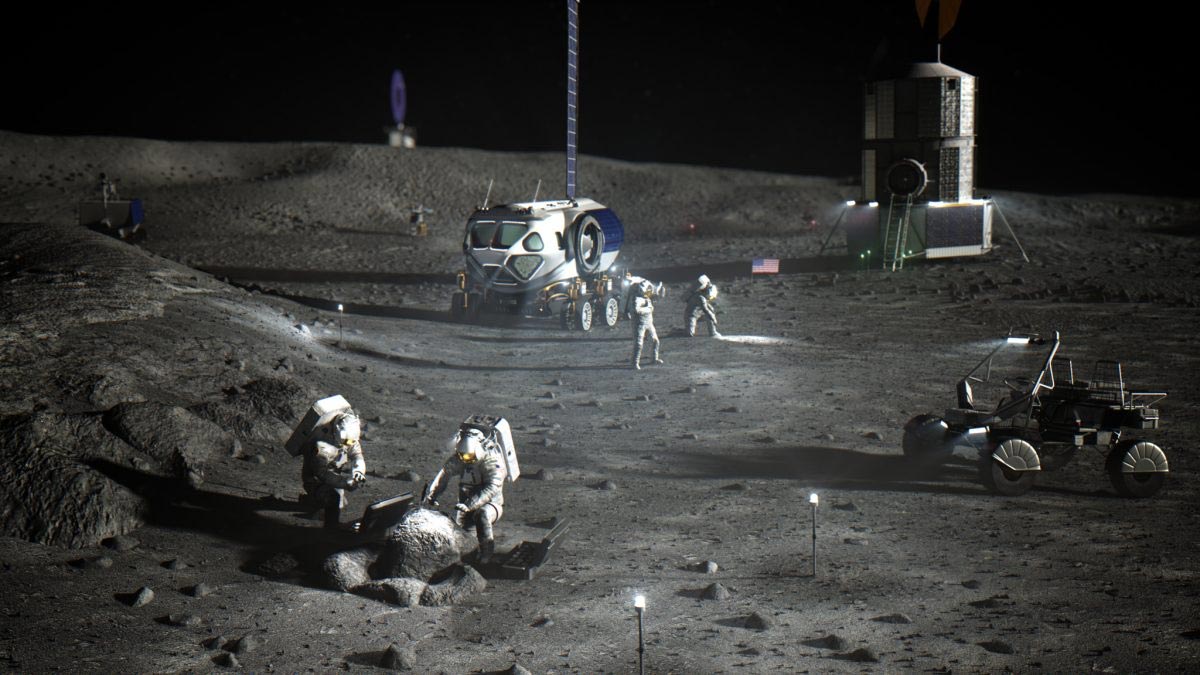 “That’s a really good question, and we have developed a commercial line of robotic interfaces and end effectors for that exact purpose,” said Johnson.

“Having a common interface that has actuation/power/data capability that can interact with payloads, with other rovers, with different toolsets… if you have that standardized robotic interface, you can design tools and payload.”

“So it’s kind of a multipurpose end effector, augmented with different tools.”

In this way, the arm is nearly universal in terms of what it can enable, as long as the tools properly interface with the end effector. In theory, this type of universality could allow for multiple tools to be taken on a rover — tools the arm could individually grab to perform a task before grabbing a different tool for a different task.

“If we have a standardized interface, we can work with commercial providers who have payloads, who have scientific instruments,” said Johnson. “But it won’t be necessarily on us to provide all of the exact utilities or the features that the customer requires.”

“The goal is to be adaptable so we can accommodate as many of those use cases as possible.”

In other words, MDA seeks to give the industry a universal attachment from which various tools — including mission-specific ones — can be used.

And that’s really just the start, according to MDA. “As increased interest goes to the lunar surface, whether that’s government or commercial, [the goal is] to look at supporting a wide range of customers for their mobility needs — NASA and Artemis being one of those, but other commercial and government customers following after,” added Johnson.

The new initiative with Lockheed Martin and General Motors is separate from MDA’s ongoing participation in the Canadian Space Agency’s LEAP initiative, which seeks to advance Canadian lunar technologies and activities via a lunar rover.

And, in large part, the LEAP and Gateway programs (the latter of which necessitated Canadarm3’s development) were designed from CSA’s standpoint to do exactly what MDA is now seeing — especially with Canadarm3: to advance technology and industry that can then be used in commercial applications.

“You can really feel the pace of commercial advancement,” enthused Johnson. “And when you look at new infrastructures in orbit and eventually as everyone kind of turns their head from the Moon to Mars, we really think that robotics is a key enabler of space infrastructure.”

How Lockheed Martin, NASA will send a rocket to Mars to launch samples off the planet to a waiting European Orbiter