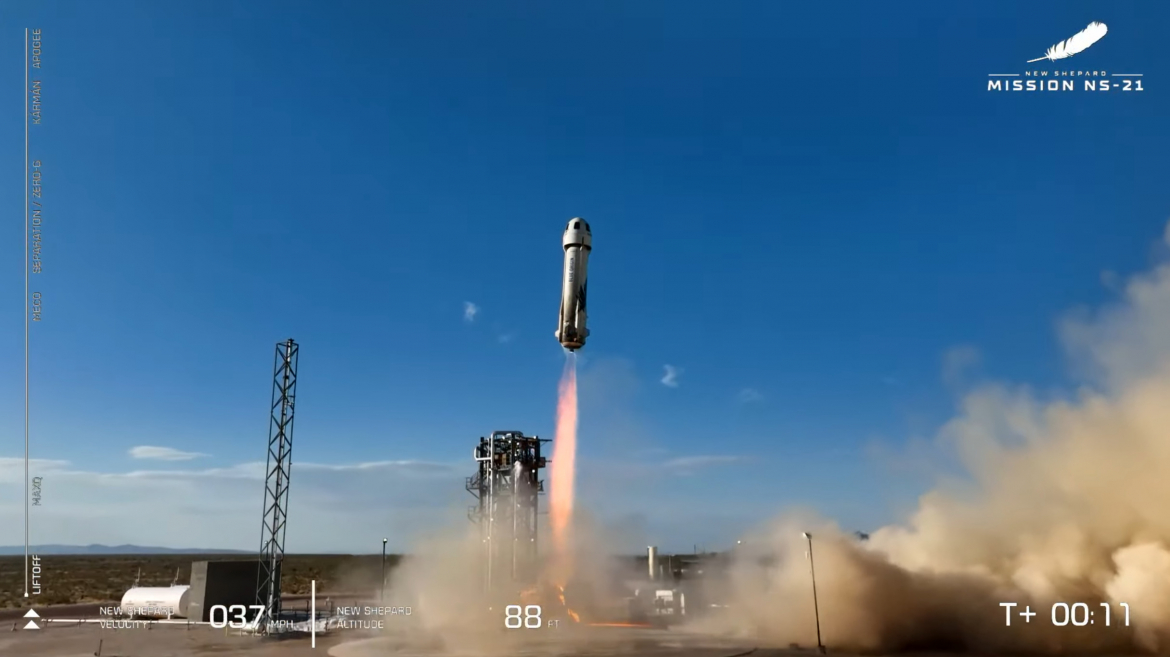 Blue Origin’s New Shepard system for launching tourists and experiments on short, suborbital journeys into space conducted its fifth crewed flight. After a delay last month to fix a backup system that was not meeting performance expectations, NS-21 is scheduled to launch on Saturday, June 4th at 8:25 AM Central Daylight Time (13:25 UTC).

The launch took place at the Blue Origin launch facility known as Launch Site One. The complex resides in the Jeff Bezos-owned Corn Ranch land parcel near Van Horn in the west Texas desert. The site has hosted twenty previous New Shepard launches along with numerous firing tests of Blue Origin-designed engines.

NS-21’s six-person crew included a veteran of a previous New Shepard launch. Evan Dick flew above the Karman line on the NS-19 mission in December 2021 alongside former NFL star and ABC Good Morning America host Michael Strahan, Alan Shepard’s daughter Laura Shepard Churchley, and three other passengers. This is Evan’s second flight into space in the past six months.

Evan, an investor and former senior executive for D.E. Shaw and Highbridge Capital, is also an engineer, sailor, diver, motorcyclist, and licensed pilot who volunteers for Starfighters Aerospace. He is currently the Managing Member of Dick Holdings, LLC, a holding company.

Dick came up with the patch concept for this mission because he described reaching space aboard NS-19 as being above the ocean after a lifetime of living under the surface. In addition, several NS-19 crew members have been on undersea voyages. 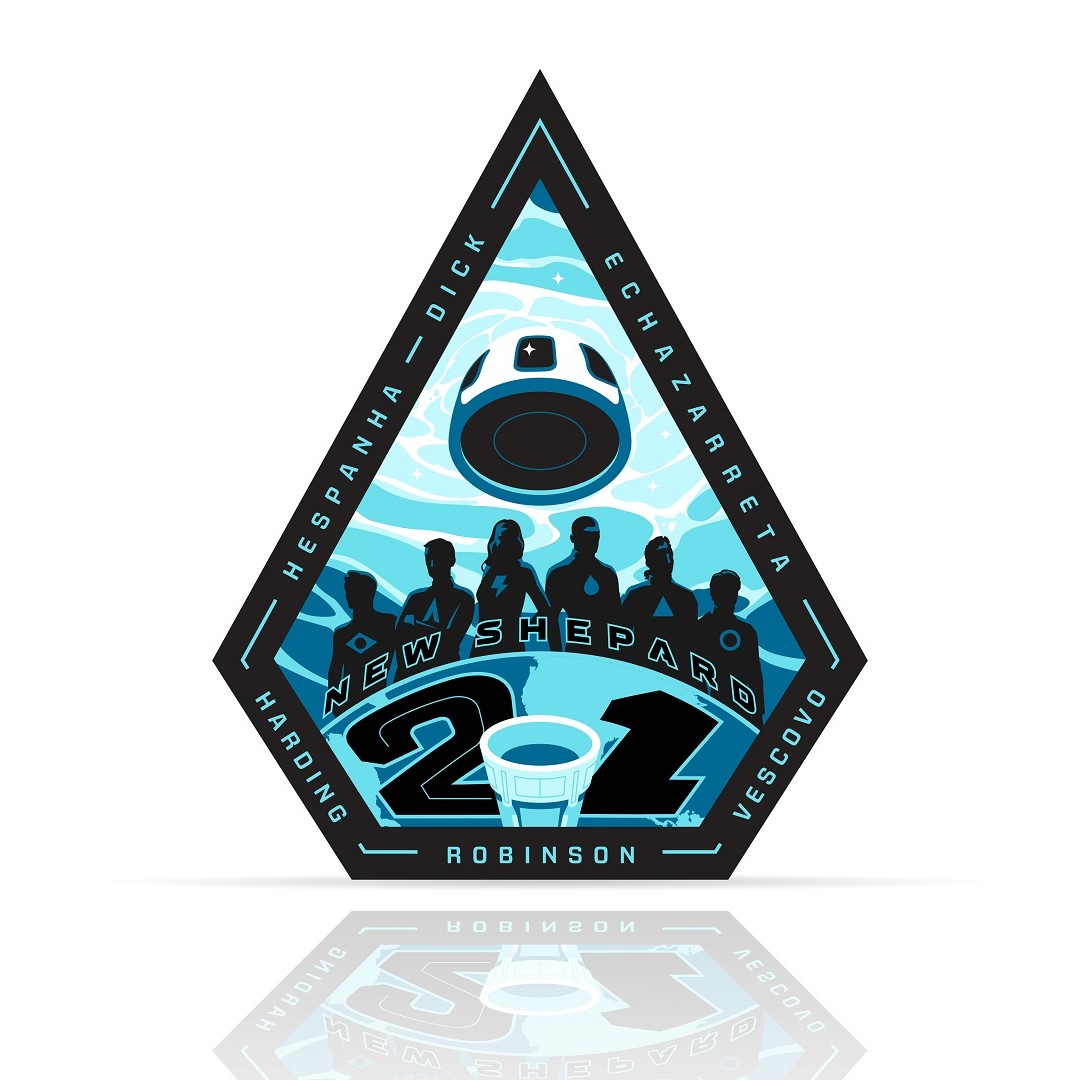 The mission patch for the NS-21 mission. Each crew member’s silhouette contains a symbol related to their background. Via Blue Origin

Also aboard NS-19 was Katya Echazarreta, age 26, born in Guadalajara, Mexico. Katya, also known as Kat, graduated from UCLA with a bachelor’s degree in electrical engineering while also becoming an intern at the Jet Propulsion Laboratory (JPL). She became a full-time engineer at JPL, working on five spacecraft missions including the Perseverance rover and the upcoming Europa Clipper mission.

Echazarreta is currently working toward a master’s degree in electrical engineering at Johns Hopkins University while also guiding other girls and women wanting to work in STEM fields. She will become the first Mexican-born woman to fly into space. Kat was chosen out of 7,000 applicants by the nonprofit organization Space Humanity to fly on this mission.

Hamish Harding – a Briton born in 1964 – is the chairman of Action Aviation, a business aviation sales and operations company, as well as an accomplished pilot and explorer. He is a graduate of Cambridge University with degrees in natural sciences and chemical engineering.

Harding was the pilot and mission director of One More Orbit, a flight aboard a Gulfstream G650 that circumnavigated the Earth around both the North and South Poles in 46 hours, 40 minutes, and 22 seconds – setting a new world record for the fastest round-the-world trip over the poles. The flight took off from and landed at the Kennedy Space Center’s Shuttle Landing Facility. 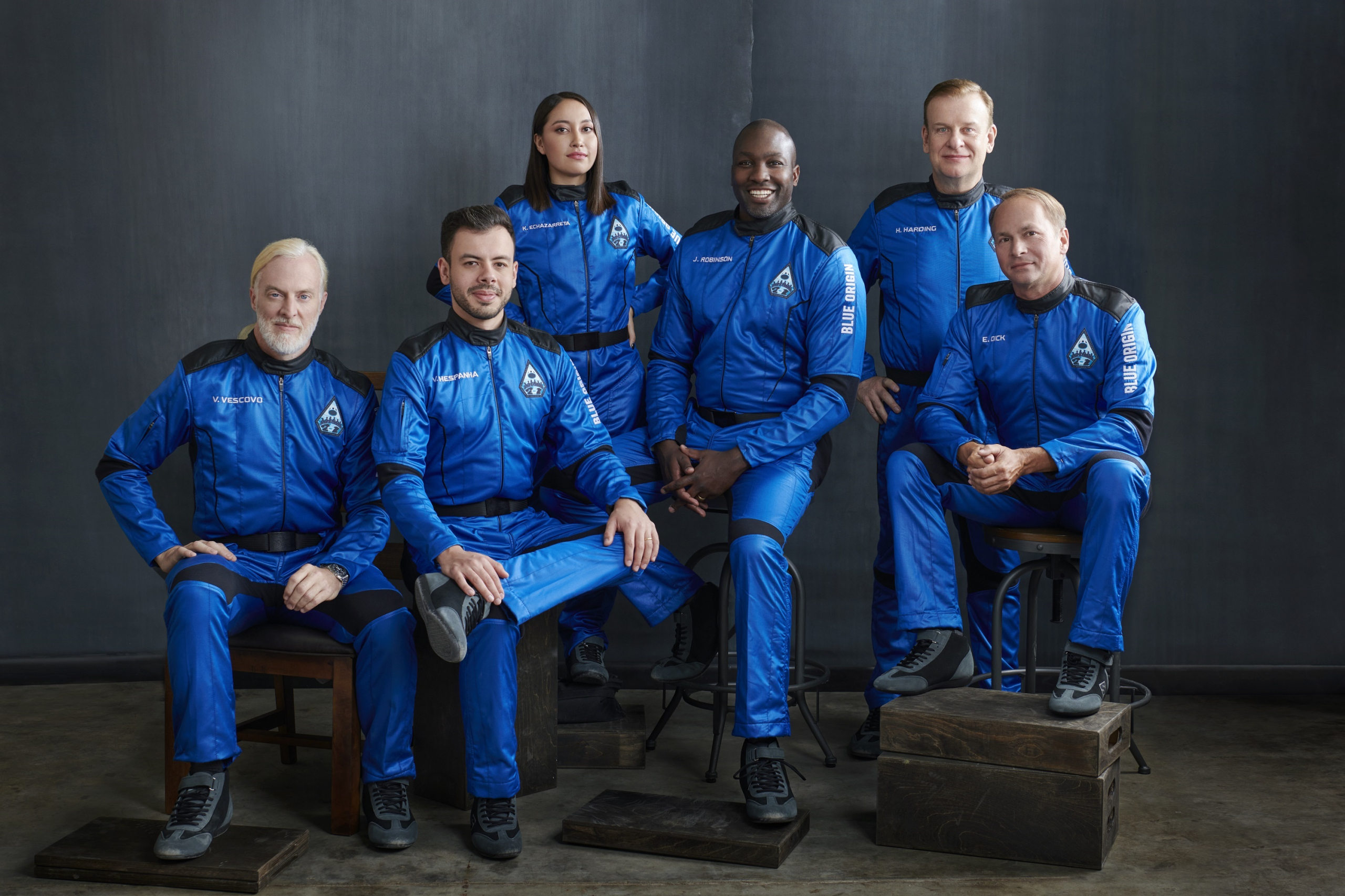 The official crew portrait for the six-person NS-21 mission. Via Blue Origin

One More Orbit flew on July 9-11, 2019, with Harding, former astronaut Terry Virts, former cosmonaut Gennady Padalka, and five other people of various nationalities. Harding has also visited the deepest point on Earth, the Challenger Deep in the Pacific, in a submersible alongside fellow NS-21 passenger Victor Vescovo.

Victor Correa Hespanha, 28, from the state of Minas Gerais in Brazil, is a civil production engineer and the second Brazilian to travel in space after Marcos Pontes in 2006. He will become the first-ever Brazilian space tourist, as Pontes was a professional astronaut for the Agencia Espacial Brasileira (AEB – the Brazilian space agency).

His seat is sponsored by the Crypto Space Agency, which is an organization that wants to combine space technology with innovation and financial power from the cryptocurrency market. He is billed as the world’s first “cryptonaut”.

Hespanha won the seat aboard NS-21 in a draw after he invested in an NFT (non-fungible token) through the Crypto Space Agency. He had a childhood dream to be an astronaut and is now about to fly into space as a tourist.

Jaison Robinson, 41, from Chicago, Illinois is an athlete, investor, reality TV star, and explorer. He is the founder of JJM Investments, a commercial real estate company. He and his wife Jamie have also founded DVV (Dream Variations Ventures) which funds technology and sports startup companies.

Robinson earned a bachelor’s degree at Stanford as well as a JD (law degree) from the University of Chicago. While at Stanford, he played on the water polo team and was also on the US National Team for the sport. He was a finalist on the TV show Survivor: Samoa in 2009, has hiked in Antarctica and to the top of Angel Falls in Venezuela, and is a scuba diver and skydiver. 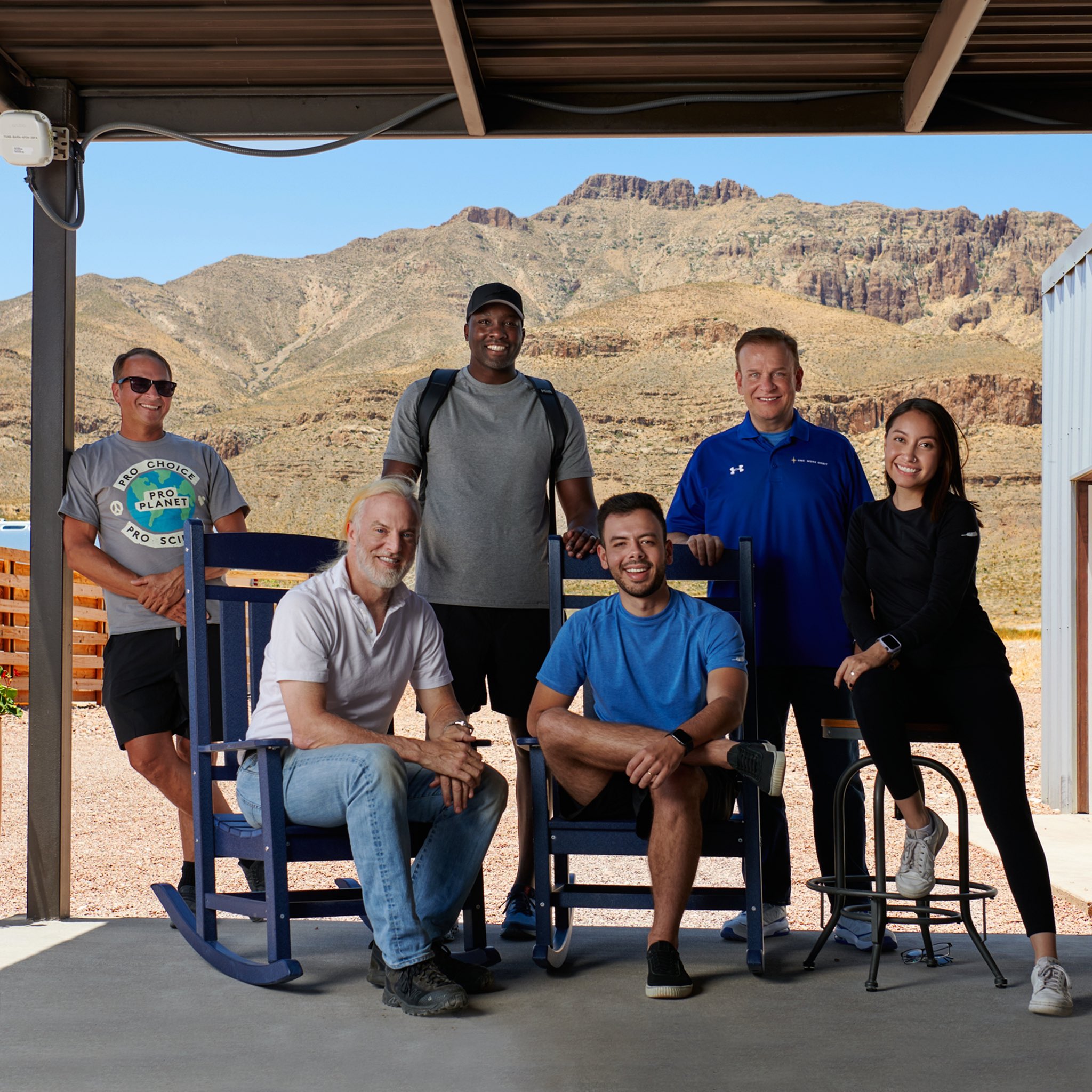 The crew of NS-21 poses for a picture while staying in Astronaut Village, Blue Origin’s crew quarters at their West Texas launch site. Via Blue Origin

Victor Vescovo, 56, of Dallas, Texas, is a private equity investor, an explorer, and a US Navy veteran who has been to the summit of Mt. Everest and to the bottom of Challenger Deep. Vescovo has degrees from Stanford, MIT, and Harvard Business School, and served 20 years in the US Naval Reserve as an intelligence officer. He is a certified submersible test pilot as well as a multi-engine jet and helicopter pilot.

As an explorer, he has climbed to the highest point of all seven continents, skied on the North and South Poles, and has been to the deepest point of the world’s five oceans. During the Five Deeps Expedition, he not only visited Challenger Deep but became the first human ever to reach the Molloy Deep in the Arctic Ocean.

He has completed the Explorer’s Grand Slam (Last Degree) and holds the record for being the human being that has covered the greatest vertical distance without leaving Earth’s surface, at 64,869 feet (19,772 meters). Vescovo currently is the managing partner of Insight Equity, a private equity investment firm he co-founded.

The six NS-21 crewmembers were originally scheduled to fly on May 20th, but Blue Origin announced on May 18th that the flight had been delayed to fix an issue with a backup system aboard New Shepard. They were already on location at the Corn Ranch astronaut village and would have undergone two days of training before their flight.

Prior to liftoff, the New Shepard booster was fueled with liquid hydrogen and liquid oxygen about three hours before launch, and the crew boarding process began around forty-five minutes before the scheduled liftoff time.

The crew gantry arm retracted after the T-2 minute mark. The New Shepard booster’s single BE-3 engine, capable of up to 110,000 lbs of thrust, ignited at T-0. The rocket was held down for six seconds to ensure that the engine was performing correctly, then released from its launch restraints.

The capsule separation took place at the three-minute mark of the flight, and the New Shepard capsule spent about four minutes in microgravity. During this time, the crew members were able to float around the cabin while looking out the large windows by their seats for a few minutes.

The capsule passed the Karman line at 100 kilometers (62 miles) altitude, which is the boundary of space recognized by the Federation Aeronautique International (FAI).

The booster deployed its circular ring and wedge fins during its descent, and fired its BE-3 engine near the ground for a touchdown on the north landing pad around the T+7:30 mark. The capsule descended on parachutes and touched down in the desert around 10 minutes and 30 seconds after liftoff, with a small retrorocket firing before touchdown to soften the landing for the crew. 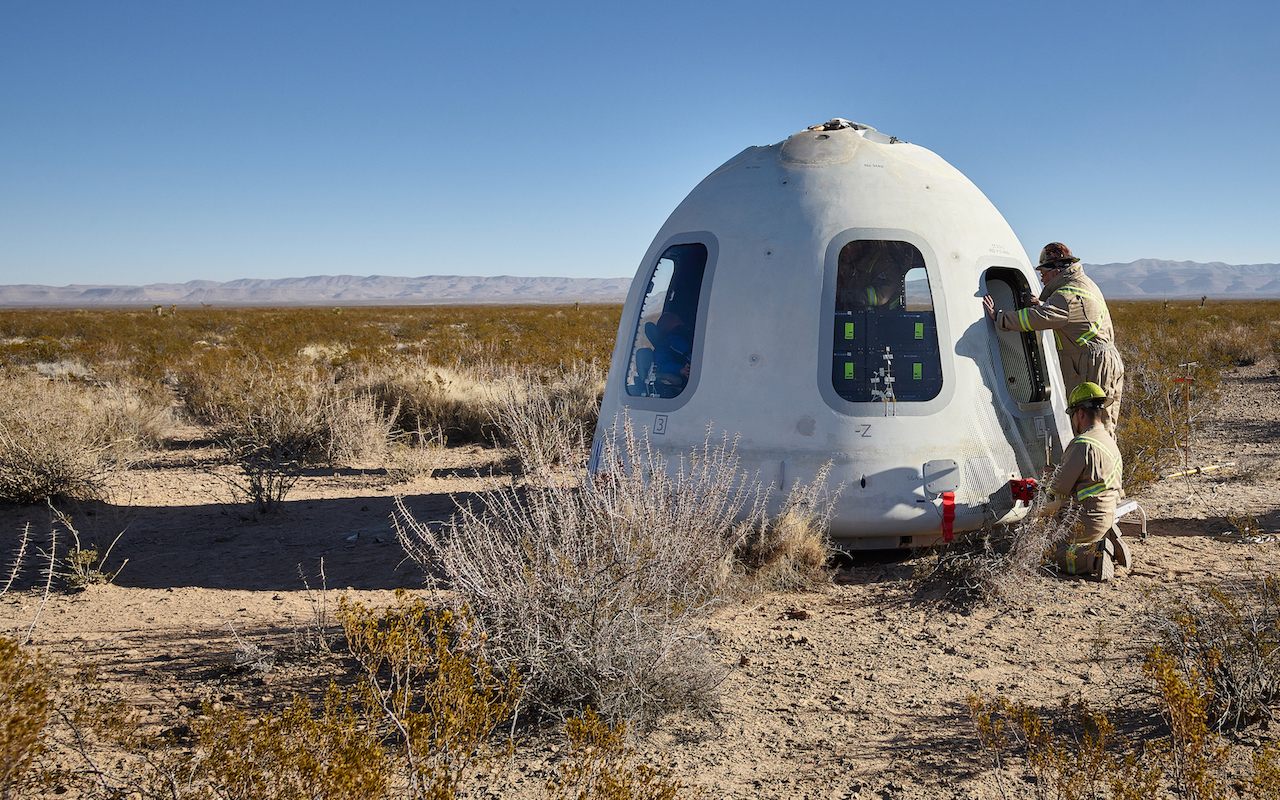 Recovery crews were driven to the landing site along with family members of the crew, and the recovery team safed the spacecraft after its touchdown. The capsule and booster will be returned to the processing facilities to be prepared for their next flight, in a process similar to what has been done after past New Shepard flights.

The NS-21 mission was the fifth crewed launch for Blue Origin. NS-21 was also the second New Shepard flight of the year.

After a long test campaign and a slow ramp-up of crewed flights, space tourism is finally entering a regular operational cadence for Blue Origin, while competitor Virgin Galactic plans to resume testing later this year.