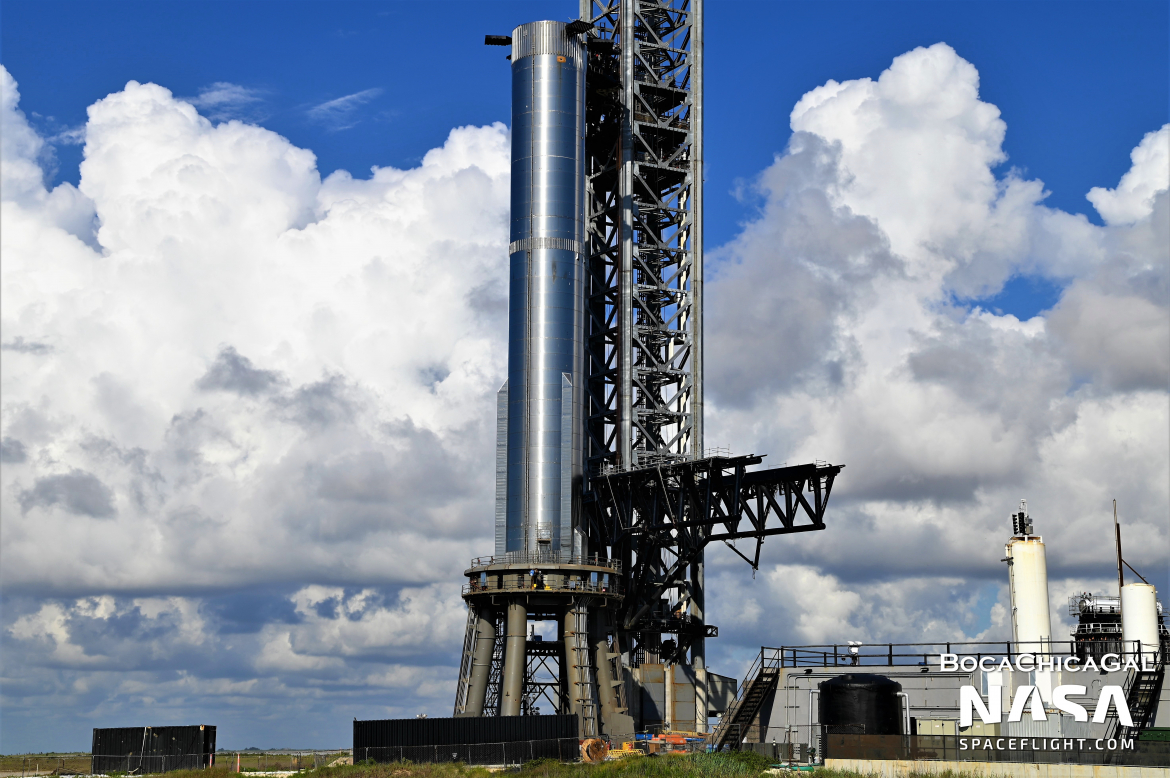 SpaceX has entered the next phase of preparations to send Starship to orbit. Following the key milestone of passing the Federal Aviation Administration’s (FAA’s) Programmatic Environmental Assessment (PEA) with a mitigated Finding Of No Significant Impact (FONSI), SpaceX rolled out Super Heavy Booster 7 to the Orbital Launch Site for a third time to begin its static fire test campaign which will set the stage for Starship’s first Orbital Test Flight – paired with Ship 24 – later this year.

SpaceX moved Super Heavy Booster 7 out of the Mega Bay on June 23, rolling out to the orbital launch site shortly after. This was the vehicle’s third rollout to the launch site, following two previous trips down Highway 4 back in April and May.

For this rollout, unlike the previous ones, Booster 7 sported an impressive suite of 33 Raptor 2 engines on its aft section.

The latest flow inside High Bay 2 also put the finishing touches to the booster’s full launch configuration. The vehicle now has all four grid fins installed, all four chines, and the Hydraulic Power Units (HPUs) are also covered with their respective aerocovers. Teams also appear to have installed debris and heat shields around the engines.

This indicates that this may well be Booster 7’s last trek to the orbital launch site before the long-awaited Starship Orbital Test Flight, which Musk indicated should happen in July. However, this is likely to be delayed, as first-time operations and tests will likely provide some challenges on the path to launch day.

SpaceX is already achieving new milestones with Booster 7, including the first use of the Launch Tower arms – nicknamed “the chopsticks” by Musk- to lift and place a Super Heavy booster into the Orbital Launch Mount.

This complex lifting process began earlier in the day, with the Ship QD (Quick Disconnect) arm retracted to allow the arms to move past the booster’s height.

The second stage of the lift involved the use of the arm stabilizers, which are located below the arms and help stabilize either the boosters or the ships during lift operations. They allow the arms to more carefully control the lift and reduce the sway of the vehicles as they hang several meters off the ground.

These stabilizers moved inwards against the booster and into another set of sockets located in the methane tank of the vehicle. Once this was complete, the guiding pins at the bottom disconnected, and the arms started lifting the booster once again.

Full Chopstick lift of Booster 7. The first time a Super Heavy has been lifted by Mechazilla.

This carefully choreographed sequence of events, as complex as it might seem, will likely save SpaceX several hours of operations and work in the future as cranes will not be needed to lift boosters and ships anymore. Usually, crane lifts require intensive human labor and also necessitate daylight operations for safety considerations.

Booster 7, now resting on the orbital launch mount, is being prepared for its static fire test campaign — with other tests of smaller scale – such as igniter tests – planned to happen ahead of this. 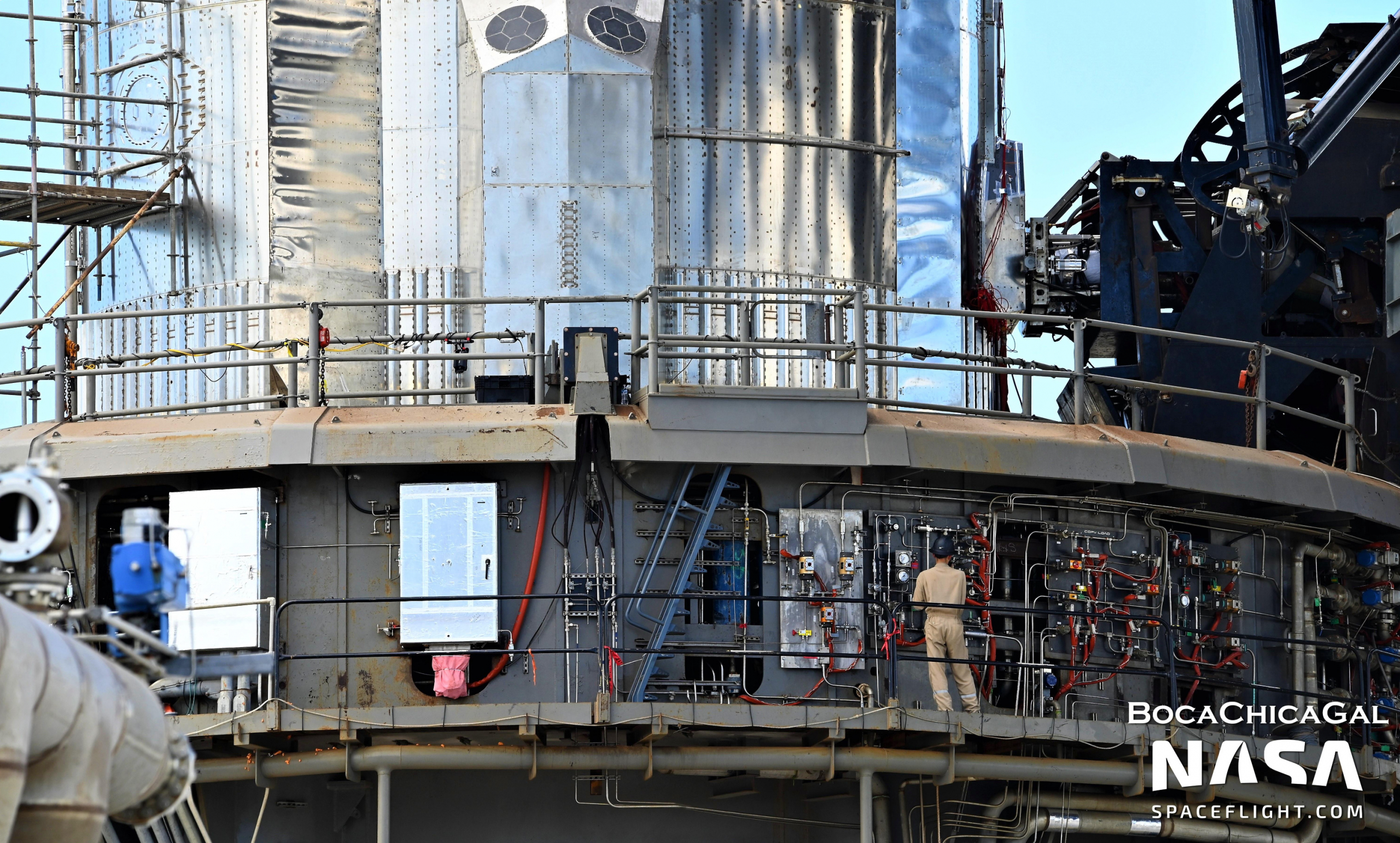 Although road closures and marine hazard notices are in place for Monday through Thursday, the actual schedule won’t be known until Mary (@bocachicagal) receives an “overpressure notice” from SpaceX, which has been the traditional way of informing the last remaining residents of Boca Chica Village of a Static Fire test and the possibility the vehicle could explode at the pad, which has the potential to break a few windows.

It is still unknown what the test campaign will look like overall. However, it is expected to be short and will likely involve only the number of static fires needed to gather data for launch readiness as the company and, in particular, Musk, are pushing ahead for a launch as soon as next month.

With the FAA’s PEA returning a mitigated FONSI finding, SpaceX has taken a significant step toward being ready to fly Starship into orbit. Still, several key tests lie ahead that could introduce more delays into the program, and the readiness of both Booster and Ship for flight could also be at play with schedules.

Booster 7 will be the first to execute a Static Fire test campaign on the orbital launch mount. As such, several key components and systems of the entire Starship enterprise will also be tested, including the new orbital fueling farm and fueling systems. Any of these systems could reveal an issue that needs to be addressed before continuing with the test program.

Ship 24’s readiness is also an important watch item. Residing in the High Bay, the expected partner of Booster 7 is currently undergoing the installation of its six engines.

While Starbase teams have a level of experience testing Ship systems, Ship 24 introduces several design upgrades and will be the first one equipped with Raptor 2 engines.

Ship 24 has a fresh new paint job!!! Clean lines between the tiles! 🤩

Another highly notable change with Ship 24 is its payload PEZ system which will allow the option for the first integration of Starlink v2 satellites into its payload bay for deployment into orbit should the Ship achieve that milestone on first flight.

While Ship 24 and Booster 7 will be in the spotlight for the next few weeks, Ship 25 and Booster 8 are being readied at the production site.

Booster 8’s LOX tank section is in the Mega Bay while its methane tank is over in the Mid Bay — each undergoing its own processing. Stacking of these two major pieces of the booster is expected to occur in the next few days.

Meanwhile, Ship 25’s common dome and mid LOX sections sit in the Mid Bay, also being worked on in preparation to continue stacking back in the High Bay in the next few weeks.

Additionally, SpaceX recently rolled out another test tank, B7.1, to the launch site. B7.1 was placed in the structural test stand and put on a compression cap to allow the teams to further test the structure of Super Heavy vehicles.

A new Ship aft dome, believed to be for Ship 27, was also spotted at the production site while another booster aft cap was delivered as well for a future booster.

This surge in activity was expected now that the FAA PEA is complete and could increase more over the coming months as the production site in Texas may not only have to supply vehicles for launches from their site next door but also for the launches set to occur from Florida on SpaceX’s Starship launch site at LC-39A.

Across the Gulf of Mexico, progress at SpaceX’s launch site in Florida continues in earnest as well. The company has rolled out the first three segments of the Launch Tower and has already begun to stack them at the historic complex. 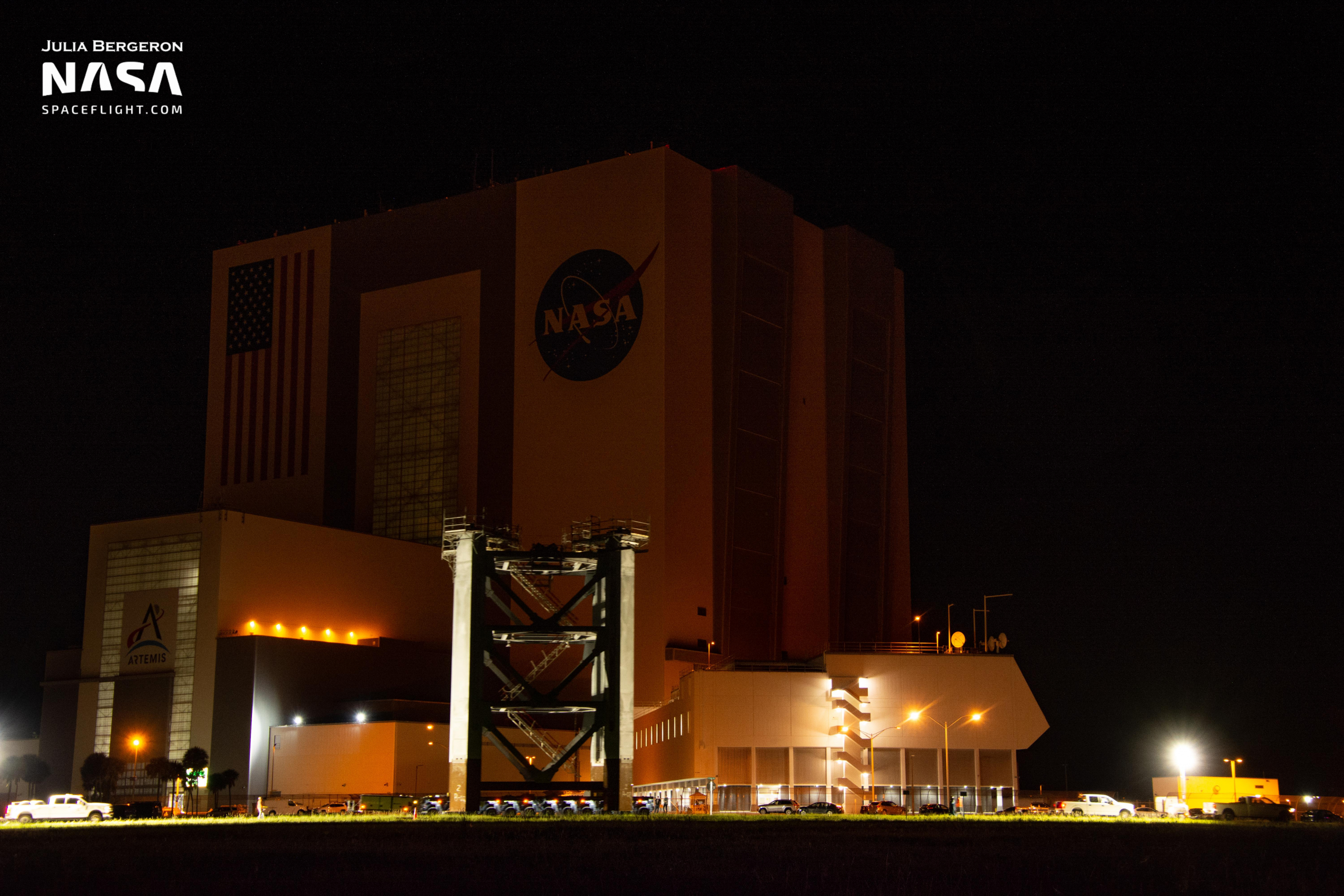 Stacking is being undertaken by the newly built LR11350 crane, a similar model to the one used at Starbase for stacking of their Launch Tower and nicknamed Frankencrane by employees. The nickname was largely an effect of the crane having all parts made up of different segments from other cranes with non-matching colors. This time though, the crane at LC-39A is entirely yellow.

Also, pieces of the tower arms were seen by observers around KSC, indicating SpaceX is getting ready to put together them in the near future.