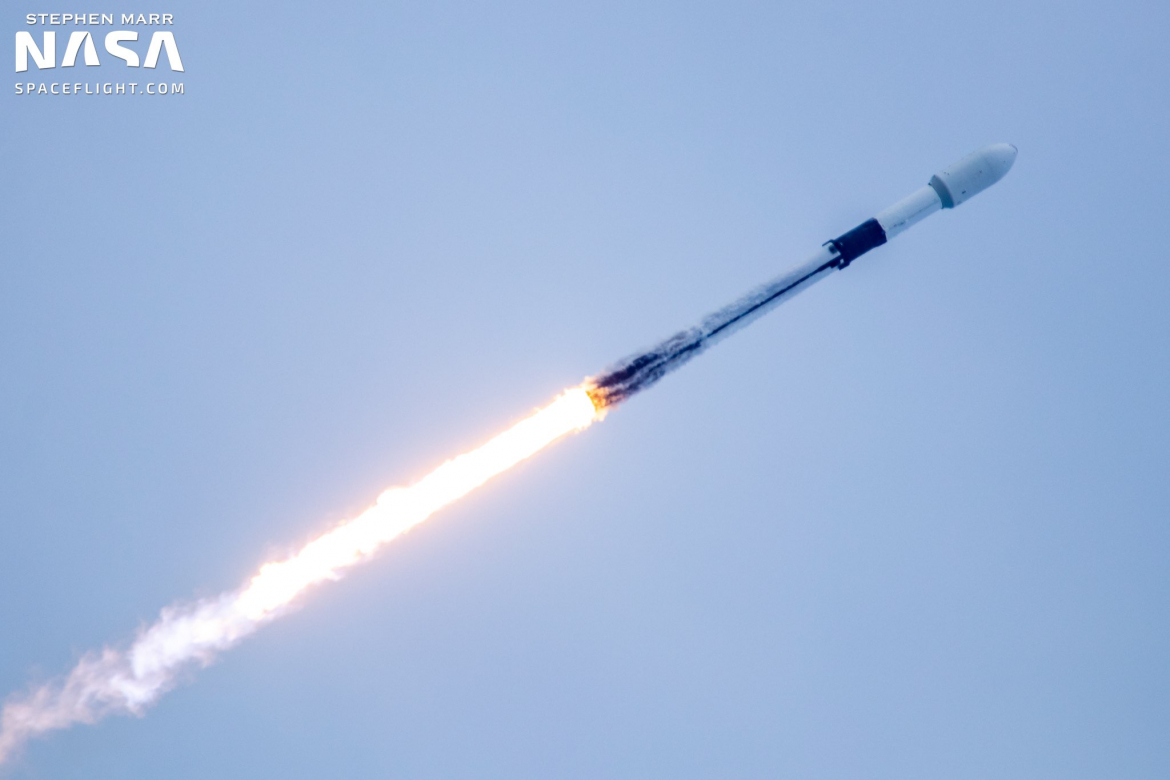 SpaceX has launched the SES-22 communications satellite to geostationary transfer orbit on the 27th Falcon 9 launch of 2022. The launch occurred on Wednesday, June 29, at 5:04 PM EDT (21:04 UTC). This was the beginning of a two-hour and 10-minute launch window from Launch Complex 40 at the Cape Canaveral Space Force Station.

The Falcon 9, booster 1073, launched on an eastbound trajectory in the usual flight path for satellites launching to a geostationary transfer orbit from Florida. The first stage landed on the drone ship A Shortfall of Gravitas in the Atlantic, while the fairing halves are to be retrieved by the support ship Doug.

This was booster 1073’s second flight. Its first was on May 14, also from Launch Complex 40. Booster 1073 flew the Starlink Group 4-15 mission, launching 53 satellites. This same booster also landed on the drone ship Just Read The Instructions. The turnaround time for B1073 between Starlink Group 4-15 and SES-22 was 46 days.

The second stage injected the SES-22 satellite into its needed geostationary transfer orbit and released the spacecraft, which will coast to its apogee and then fire its own engines to circularize the orbit. The spacecraft will end up over the equator in a slot at the 135 degrees West location and will support direct-to-home C-band telecommunications services for the United States.

The 3.5-ton SES-22 satellite was originally built as a ground spare as part of a two-satellite contract with Thales Alenia Space. The SES-22 and SES-23 satellites under this contract are based on the Spacebus 4000 B2 bus, which is a proven platform used by satellites like Bangabandhu-1, Nilesat 301, Telkom 3S, and others.

SES-22’s status as a now-launching spare stems from a Federal Communications Commission’s (FCC’s) requirement years ago that satellite operators clear the 280 MHz range of C-band spectrum, plus a 20 MHz guard band, for 5G mobile services in the contiguous United States. A portion of the C-band spectrum was to be made available to mobile operators as early as last December while the agency’s full (Phase II) accelerated relocation deadline for satellite operators is December 5, 2023.

Two months later, SES ordered the SES-22 and SES-23 platforms from Thales Alenia Space as backup “spare” satellites to help the company meet the FCC’s C-band spectrum clearance deadline if the other satellites suffered a launch failure or other issues.

Northrop Grumman encountered construction delays with the SES-18 and SES-19 satellites due to COVID-19 pandemic related supply chain constraints and component reliability issues, so SES-22 was scheduled for launch as it had been completed.

SES-22 is the first of several to help SES transition its services to a different portion of the C-band.

After SES-22, the Boeing-built SES-20 satellite is slated to be launched along with its sister spacecraft, SES-21, no earlier than this coming August on an Atlas V. The Northrop Grumman satellites (SES-18 and 19) are currently scheduled to fly no earlier than this October, though a quarterly report filed by SES with the FCC states “there is a significant risk the satellites will not be commercially available by the end of 2022.”

SES and Thales Alenia Space have had to work around pandemic and Ukraine war-related difficulties to get the SES-22 satellite built and shipped to the launch site. Since no Antonov An-124 heavy lift cargo planes were available, SES-22 and Nilesat 301 were shipped to Port Canaveral aboard the Dutch cargo ship Celtic.

SES-22 and Nilesat 301 being unloaded at Port Canaveral today, ahead of launch later this year atop a Falcon 9.https://t.co/cPTKbURbfR https://t.co/ieZOSqQOaw pic.twitter.com/kNP8SWg1z5

The SES-22 spacecraft will take approximately 10 days to complete its launch and early orbit phase (LEOP) and is scheduled to begin operations sometime in August. Starting with this satellite, SES will be able to meet the FCC’s requirement to clear the lower 300 MHz of the C-band. SES-22 and its sister satellites will move the company’s services to the upper 200 MHz of the C-band.

SES-22 is the 11th Spacebus 4000 B2 satellite to be built, while SES-23 is the 12th. It is not currently known what the disposition of the SES-23 sister satellite will be, though it is also a spare satellite to cover for contingencies that would otherwise cause SES to risk missing the December 2023 C-band clearance deadline.

The geostationary satellite launch market had been in a slump in the latter part of the last decade, but there was an uptick in orders for new spacecraft in 2019 and 2020. The six SES satellites were part of this wave of orders, as they and Intelsat need new spacecraft to transition their services from the lower portion of the C-band for use by 5G mobile networks.

Although low earth orbit communication satellite constellations like Starlink and OneWeb are becoming more prominent, geostationary satellites are still needed to provide services in America and around the world.