SLS readies for roll back to VAB; final launch preparations to begin 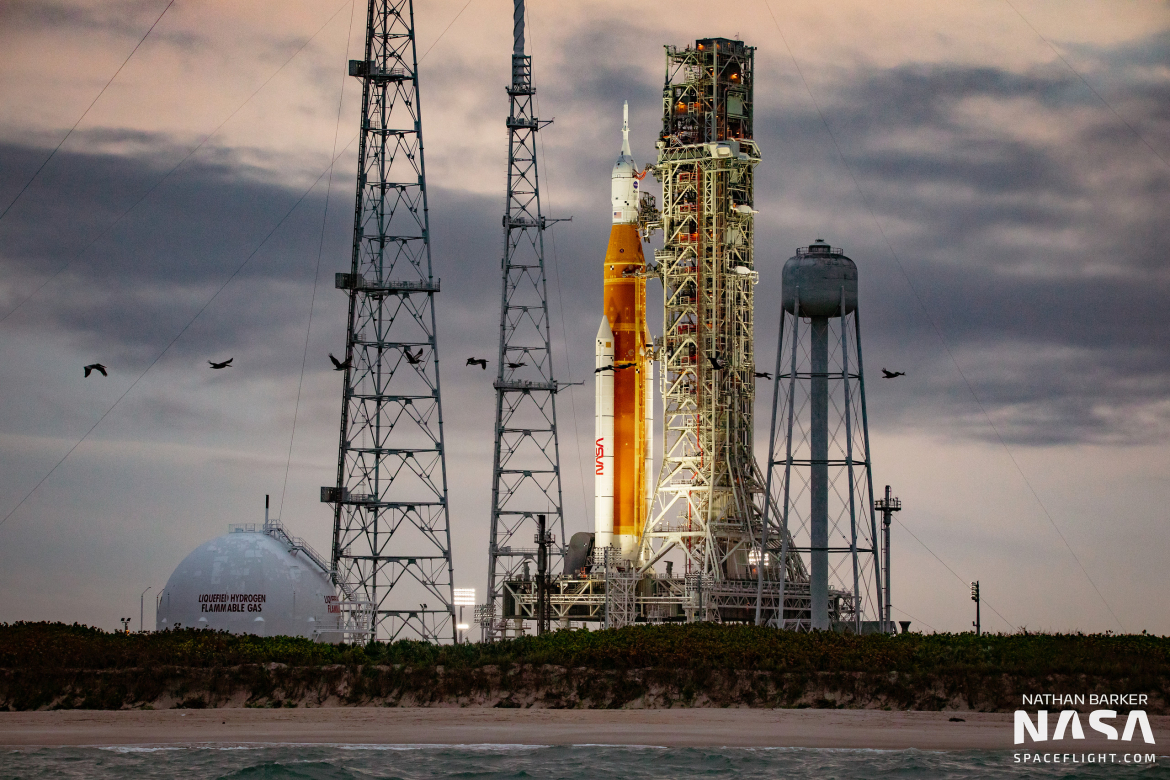 With Wet Dress Rehearsal successfully behind them, NASA will now roll the SLS rocket back to the Vehicle Assembly Building (VAB) for final launch preparations ahead of the historic Artemis 1 mission to send the Orion capsule on an uncrewed test flight around the Moon.

While this milestone brings the SLS closer to launch, significant work remains inside of the VAB, where workers will perform launch configuration work, checkouts on the overall system, and fix the liquid hydrogen bleed line connection that leaked during the fourth and final Wet Dress Rehearsal on June 20.

In all, the Wet Dress Rehearsal conducted on Monday, June 20 was a tremendous success for NASA and the SLS and Artemis teams, with all but a few minor commands not exercised (such as turning off the power in the electrical lines that run from the T0 umbilicals into the rocket).

During the June 20 test, teams took SLS through a full cryogenic tanking and near-full countdown that ended with an expected cut-off of the automated sequence at T-29 seconds.

Looking down at the Core Stage liquid oxygen (left) and liquid hydrogen Tail Service Mast umbilicals. The leak in the liquid hydrogen bleed line that runs through the mast will be repaired in the VAB. (Credit: NASA)

This leak on the Core Stage side of the quick disconnect prevented the liquid hydrogen bleed flow that thermally conditions the engines for ignition from being performed.  The valves were kept closed to prevent hydrogen from leaking, and without the ability to complete the engine chill down procedure, some of the launch commit criteria for RS-25 ignition were “masked” or hidden from the ground computers by the teams so that the 10-minute terminal count demonstration run could take place.

Teams were unable to mask the issue from the SLS’s flight computers, however, so when those computers checked the state of all four RS-25 engines at T-29 seconds, they identified the criteria violations and issued a countdown cutoff as they should.

Crucially, this took place after the critical need to demonstrate the ground computers’ ability to hand off control of the countdown to SLS’s Autonomous Launch Sequencer (or onboard flight computers).

In a briefing on the subject, NASA officials stated earlier this week that they would review the data obtained from Monday’s test to determine a forward path.

That review has now concluded with the understanding that the needed information was gathered during the Wet Dress Rehearsal campaigns to allow SLS to move safely into its next phase of launch preparation. 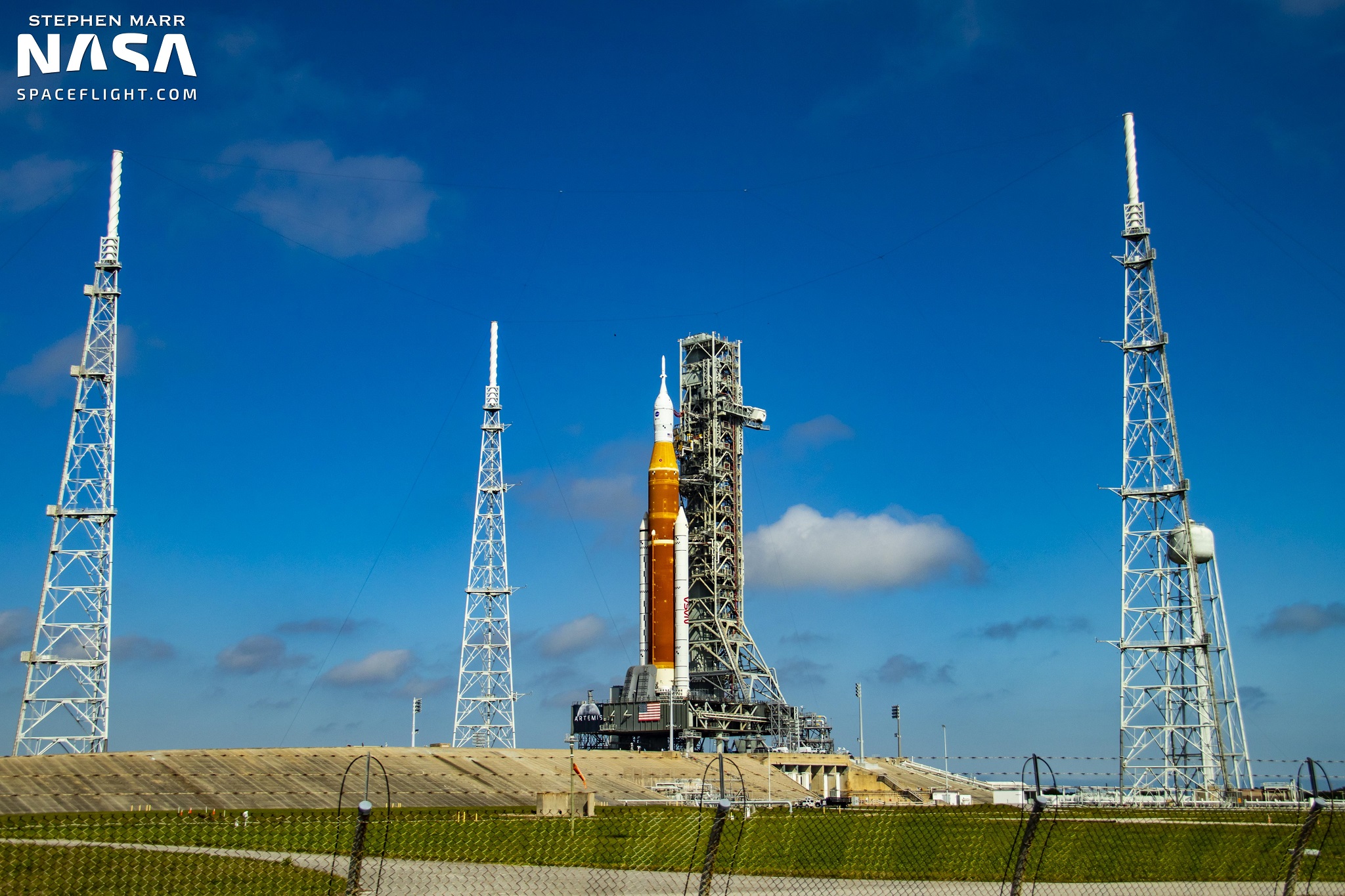 SLS on LC-39B at the Kennedy Space Center. (Credit: Stephen Marr for NSF)

During a news conference on June 24, NASA further elaborated on an issue that the Orion capsule faced during the June 20 rehearsal. A video playback unit failed on the capsule, and while this was not needed for the test, it will be needed for launch.

NASA quickly confirmed that they already have a preplanned and approved contingency procedure to deal with such a video playback issue and that during a launch campaign this would have resulted in a brief hold at T-6 minutes to execute the preplanned procedure before picking up the count for launch.

The root cause of this issue will be addressed and corrected in the VAB to hopefully prevent its reoccurrence during the Artemis 1 launch campaign.

Before coming back to the VAB, however, teams will first perform a Solid Rocket Booster (SRB) Hydraulic Power Unit (HPU) hot fire test at the pad.

This will exercise the SRB systems that are started after the T-29 second point in the countdown and will verify their operational readiness ahead of SLS’s first launch campaign. 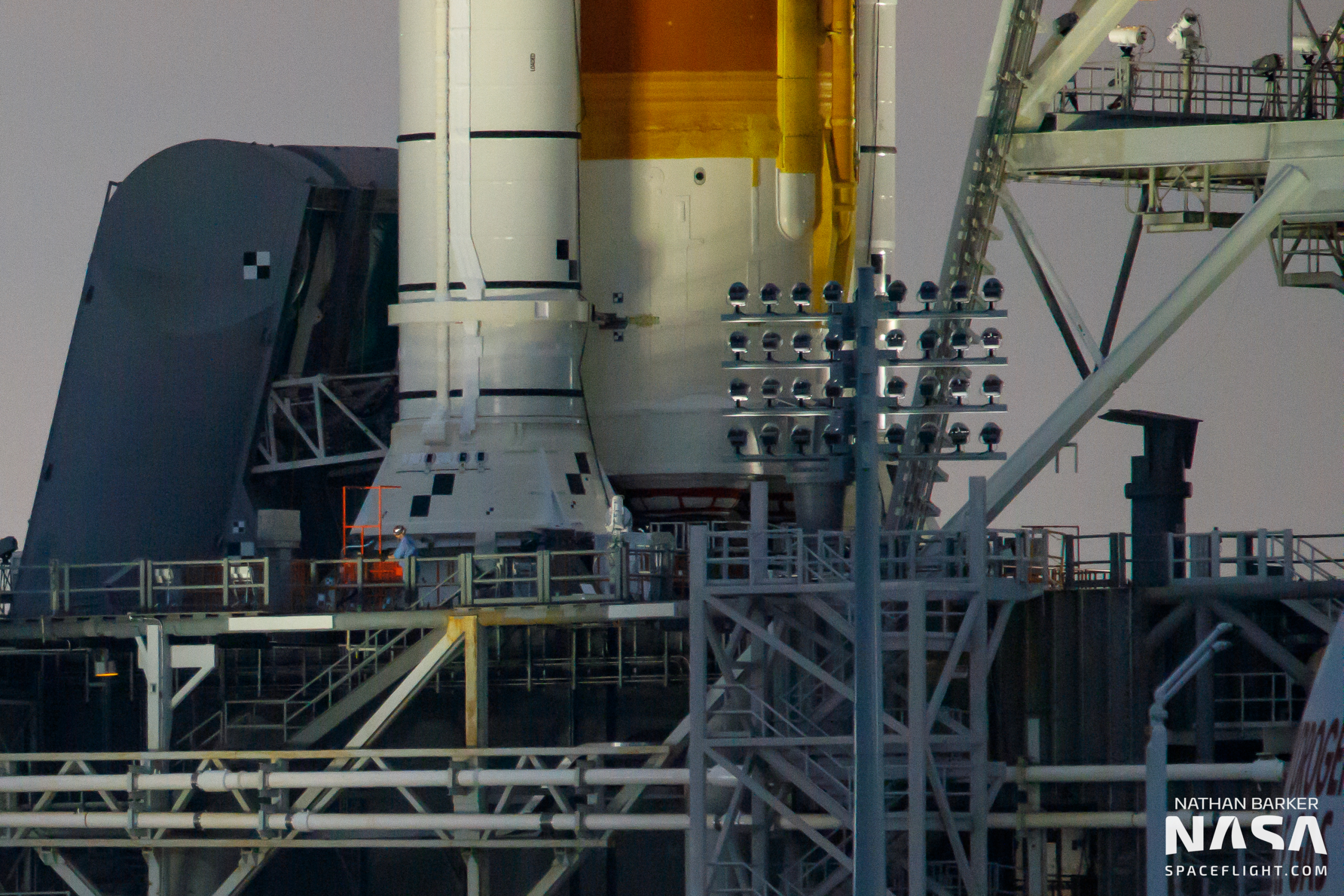 The aft skirt of the right-hand Solid Rocket Booster. In this skirt, the booster’s HPUs provide the hydraulics needed to move the SRB nozzle to steer SLS during the first two minutes of flight. (Credit: Nathan Barker for NSF)

NASA officials noted that the only reason they did not get this piece of data during the Wet Dress Rehearsal is due to the start time of the HPUs being after the cutoff at T-29 seconds.

The HPU hot fire test will be conducted beginning on June 24 and could push into June 25, with teams testing one set of HPUs on one booster before moving on to the next.

De-servicing of the hydrazine fuel for the HPU system in preparation for rollback to the VAB will then take place over the weekend and into Monday, June 27. At this point, teams will configure SLS and Mobile Launcher 1 for rollback.

The roughly 11-hour process from first motion off the pad to hard down (when the Mobile Launcher 1 is resting all of its mass on the support posts in the VAB) is expected to take place no earlier than July 1, with first motion at 12:01 AM EDT (04:01 UTC).

Crawler Transporter 2, the only one of the two crawlers upgraded to carry the full SLS stack, will once again be called upon to bring the vehicle the 7 km (4.3 miles) down the crawler way to its destination.

Once back in the VAB, NASA currently estimates approximately six to eight weeks of work to fully prepare the Artemis 1 launch vehicle for rollout to the pad for its inaugural mission.

17/x: Per drain leak, the seal was the same one used at Stennis and pad, so they think the seal might just be old and needs replacing. They're also looking at changing other seals on the core stage liquid hydrogen umbilical just in case.

This work will include already planned objectives such as connecting and performing final tests of the Flight Termination System with the Eastern Range, installing ordnance to separate the Solid Rocket Boosters and various stages from one another during flight, and performing final vehicle closeouts and checkouts.

Additionally, teams will work on the Orion issue as well as perform late-stow operations for Orion’s payloads.

However, a good deal of previously unplanned work will be required on the liquid hydrogen Tail Service Mast umbilical to fix the leak in the drain line.

In the June 24 update, NASA noted that the leading theory for the cause of the leak is the seal’s age. This Teflon seal has not been replaced for over two years (itself not an error or omission in processing) as it was present on the vehicle during its Green Run campaign at Stennis throughout 2020 and the first four months of 2021 and during the wet dress rehearsals at the pad as well.

NASA also noted that they might preemptively replace other seals on other portions of the fueling system that have also been installed for some time as an added measure to protect against future possible leaks during a launch campaign. 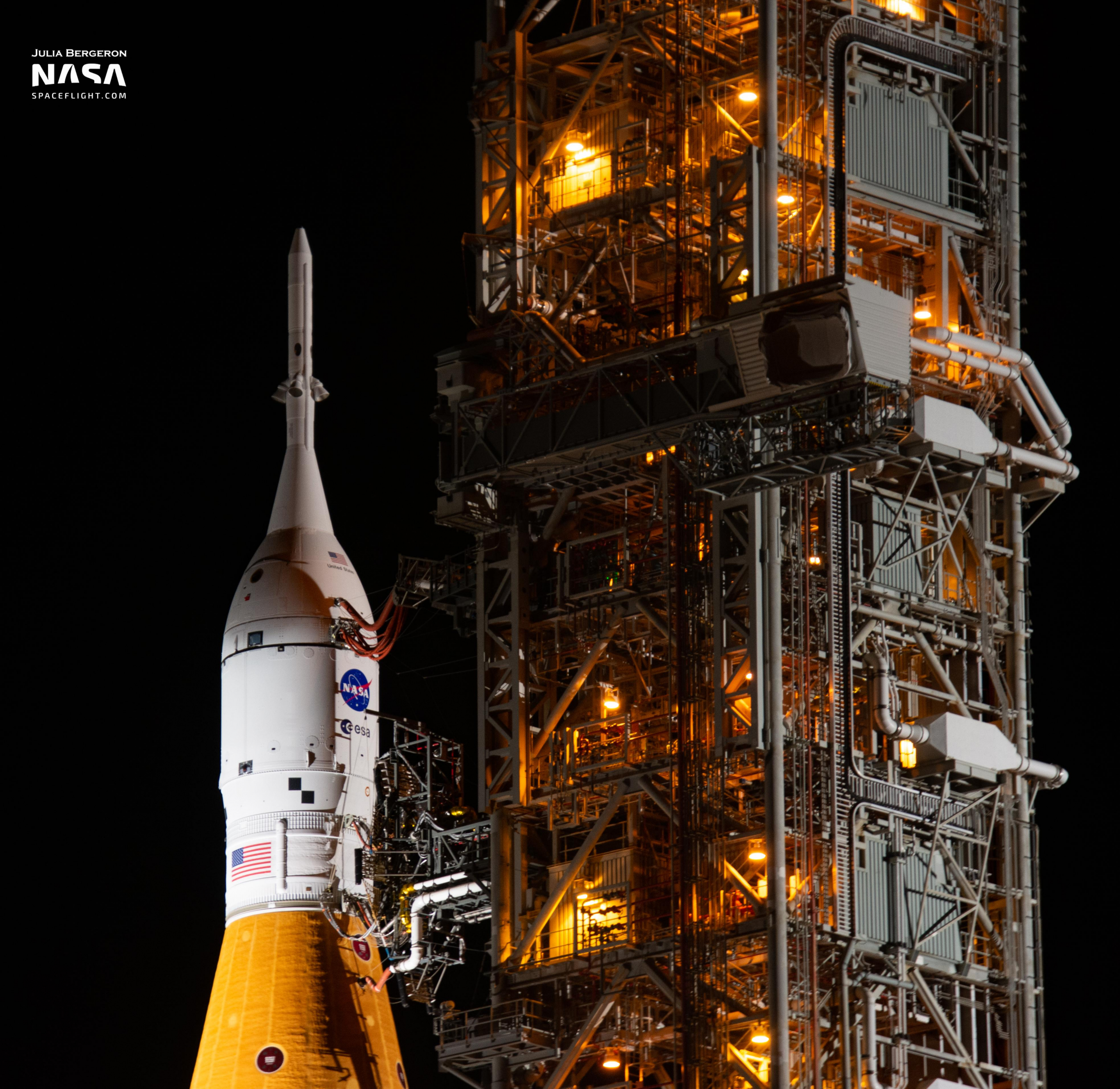 SLS will take the Orion spacecraft (seen here shrouded by its Launch Abort System) on a four to six-week mission to the Moon on the Artemis 1 flight. (Credit: Julia Bergeron for NSF)

All told, the six to eight weeks of work required in the VAB means that the late-August/early-September launch period that opens on August 23 and closes on September 6 is still viable from a timeline perspective.

However, NASA cautioned that they are not yet ready to select a launch period, let alone a launch date, until SLS is back in the VAB and teams have had a chance to evaluate the progress of forward work as well as the repair efforts to Orion and the liquid hydrogen umbilical line to the core stage.

When discussing how teams will arrive at a particular date, SLS program managers noted that the most important things are the technical readiness of the vehicle as well as Range availability and various constraints that pop up on given days during a launch period.

Of note, NASA officials said that while Launch Director Charlie Blackwell-Thompson would certainly prefer to target days that have two hour-long windows (the middle portions of each launch period) to give teams time to work through any issues that might come up on launch day, NASA itself might opt to initially target the opening of a launch period where the daily launch windows are generally shorter.

The Artemis 1 mission will be the first full-up test flight of the SLS rocket and Orion system architecture and will send the Orion crew capsule on a four to potentially six-week-long mission into a Distant Retrograde Orbit of the Moon.

The exact duration of the mission is dependent on when in a given launch period the flight lifts off.