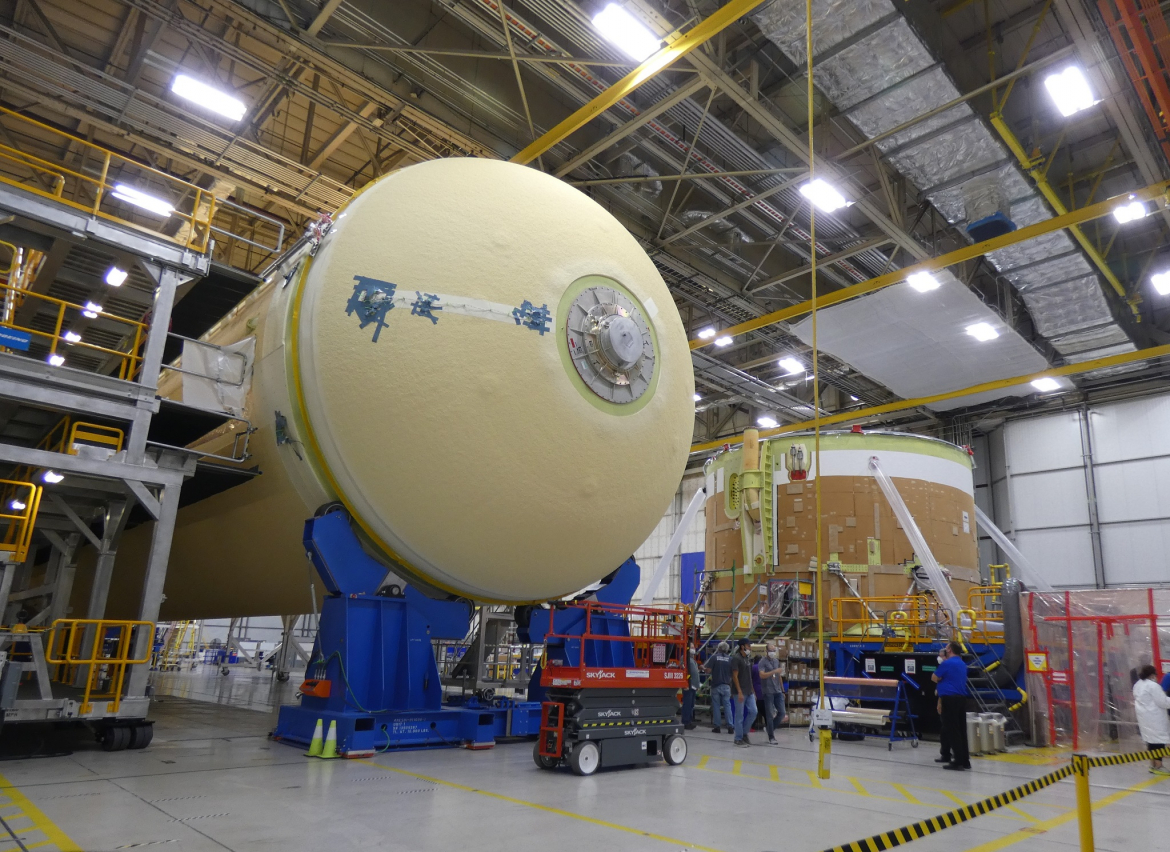 Road to completion next year

Observed from the outside, the pace of the final phases of Core Stage-2 assembly and production will be a little different from the first build. Currently, the stage delivery to NASA is planned for March 2023. “[The] forecast is March 14th,” Burroughs said.

The current situation and circumstances for the final stretch of integration and testing for the second Core Stage contrast with the circumstances for the first build when it reached this phase in 2019. Boeing was learning how to put together an engine section with the first unit and completion of integration work was much later than expected, causing Core Stage-1 to fall farther behind the rest of the Artemis 1 elements.

Boeing and NASA devoted additional resources to work around the clock to finish production of the first Core in 2019 so it could be delivered just after 2020 started. 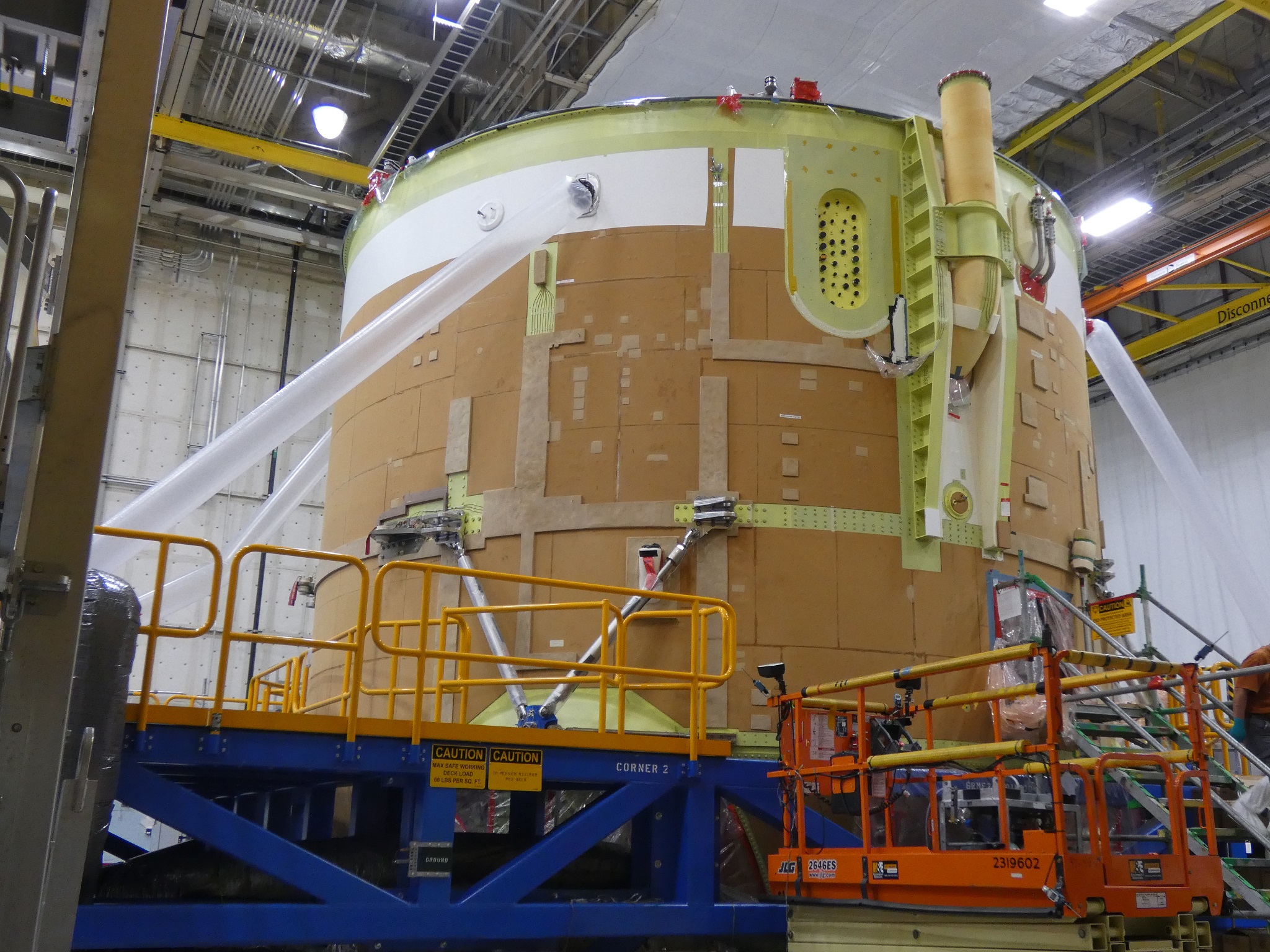 (Photo Caption: The -Z side of the engine section/boattail assembly is seen on the work platform/transportation tool where integration and functional testing are being performed. Four “quad pods” help support and anchor the assembly in the tool. The bottom of the systems tunnel is seen to the left of a segment of one of the LOX feedlines; to the right of the feedline, sections of the two smaller-diameter pressurization lines can be seen.)

Boeing has been incorporating lessons learned from the first build throughout the Core Stage-2 build and the team has more experience and institutional knowledge to leverage this time. The engineering support requirements and “footprint” are also smaller. “It’s smaller since we built it the first time, we had a lot higher engineering support the first time [and now] we’ve been able to really reduce that,” Gertjejansen said.

“And we’re sharing resources between the volumes, where in the past we had the engine section team and the four-fifths team were kind of independent,” Burroughs added. “We’ve consolidated those, we call it our ‘One Team’ approach.”

“It’s really worked out very well, it’s been very efficient since we moved over here and we got that team consolidated,” Burroughs noted. “If we run into a constraint on one volume, we can take those technicians and move [them] over to another scope of work pretty quickly.”

Core Stage-2 is not the critical path item for Artemis 2, so completing production will require fewer people and fewer workhours than the first build but the work will be spread out a little more on the calendar. It should also not be necessary to work extended overtime hours through the end of the year holiday period, as was done for Core Stage-1.

While the LH2 tank aft manifold and second systems tunnel cable tray run are being installed on the four-fifths part of the stage, engine section/boattail functional testing is expected to be completed in the early Fall leading to a readiness to perform the final major join of the stage. 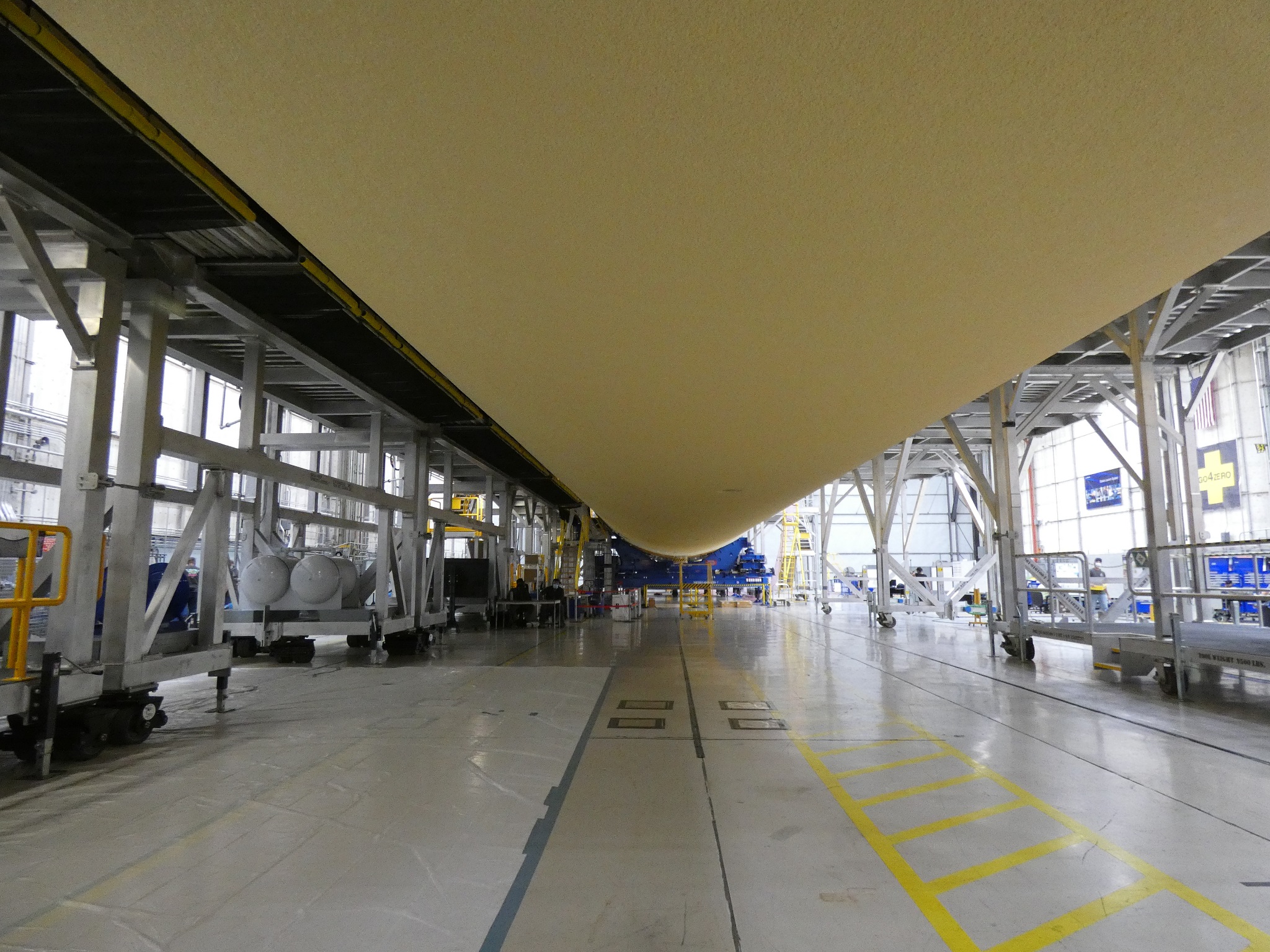 (Photo Caption: A view looking towards the forward end of the upper four-fifths of Core Stage-2 at MAF on July 20. In the distance is a “tank” Rotation Assembly and Transportation Tool (RATT) that is supporting the aft end of the LOX tank; the integrated four-fifths of the stage is also currently supported by a “stage” RATT attached to the forward skirt and a Passive Roller Stand (PRS) on the aft end of the LH2 tank. As the name implies, the RATTs and PRS allow the stage to be rotated to different orientations to assist with production work.)

At that point, once the stage is fully mated, it will be held by two Rotation Assembly and Transportation Tools (RATT) at the front and back which will be used to move the stage from the Area 48 work cell over to the Area 47 work cell in the Area 47/48 final assembly duplex.

“As soon as we mate the engine section and remove the PRS (Passive Roller System stand), we move over and then we start work,” Gertjejansen said. “We’ll break the stands down for engine section mate and then we’ll put the stands back up [after the move], so we’ll actually move over here before we start mating [LH2] prevalves or any of that [work].”

After the whole stage is situated in Area 47 (where the engine section/boattail are currently), internal and external connection work will resume. “The first thing is mating the feedlines inside, the hydrogen feedlines,” Burroughs noted.

Connecting the four LH2 prevalves on the tank aft manifold to feedlines that run to each RS-25 engine LH2 inlet, along with connecting the fill and drain line that runs from the manifold to the LH2 tail service mast umbilical plate, was a task that was originally designed to be performed while in a vertical orientation. The work was deferred for Core Stage-1 until it arrived at Stennis for Green Run in early 2020, but Boeing has designed a new tool to finish that work at MAF in the horizontal for subsequent builds.

Since the tooling is new and can only be assembled for use after the individual pieces are inside the cramped engine section, the final assembly team is going to run through assembling it outside first. “It’s a pretty complicated tool to get it in there and get it installed; that’s why we’re going to build it up on the factory floor, do some white-light scans of it and the engine section to make sure that if we have to do any kind of modifications, we catch those early,” Burroughs explained.

“[We have] a lot of critical hardware in there and you want to wring out those issues on the bench before you go in,” Eldridge added.

While that work goes on inside the engine section, other workers will start connecting the two large LOX feedlines on the outside that run from the bottom of the LOX tank down opposite sides of the stage. The LOX feedlines are installed in sections and held by brackets; in contrast to the first build, installation and connection of the LOX feedline sections will be completed later in the final assembly process, after the four RS-25 engines are installed and leak checked.

With the feedlines fully connected during Core Stage-1 final assembly, the engine leak checks were consuming a lot of helium used to do the test. “When we were trying to pressurize for those engine leak tests, the helium was leaking back into the LOX tank and then out into free space,” Burroughs explained.

“With helium shortages the way they are right now we decided to stop putting feedlines on, blank off the feedline for that [engine leak check] test, and then finish up our feedlines before we mate them all the way up to the LOX tank.”

Finishing up the inside and outside connections and installing the engines will be in preparation for the Final Integrated Function Testing (FIFT) of the full stage. “[We’ll] finish off some systems tunnel work once you’re mated, finish up some connections, and then get into FIFT,” Gertjejansen said. 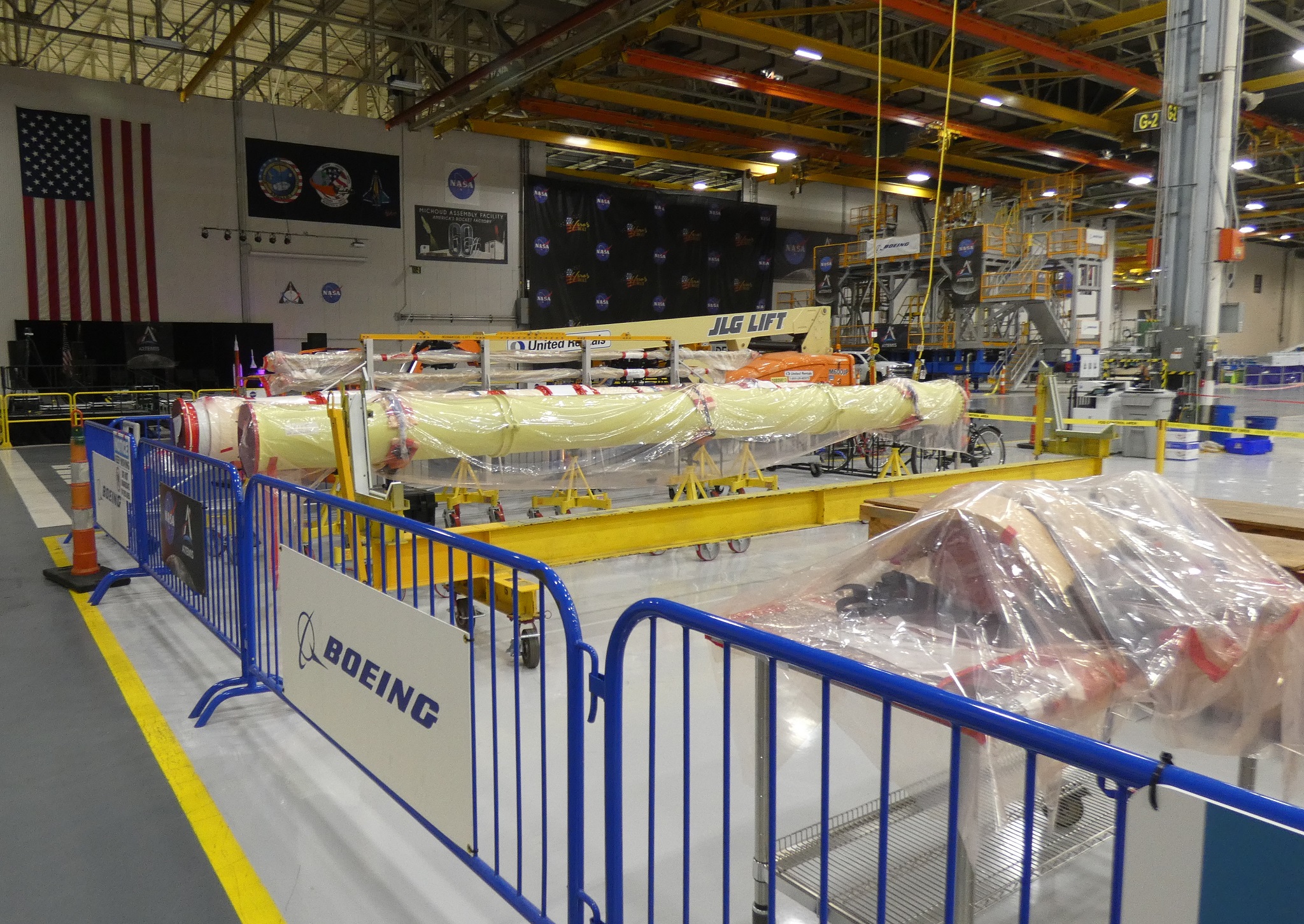 The four engines for Core Stage-2 and Artemis 2 are in storage at Aerojet Rocketdyne’s facilities at Stennis in their shipping containers and will be transported to MAF in the Fall when the stage is ready for installations. “Right now, the way the schedule lays out [we would be] ready for install [around] the week before Thanksgiving, so we’ve been telling them have them here ready to go by Thanksgiving,” Burroughs said.

“I’m not sure when AR is bringing them over, I heard like mid-October.” After engine installation near the end of the year, final connections, integrated testing, and final detailing on the outside of the stage will continue into early 2023, pointing towards the March 14 estimated completion date.

When will Artemis 2 need the Core Stage?

Following delivery in early 2020, the first Core Stage still needed to play the role of the propulsion test article for the Green Run design verification campaign that was then performed at Stennis Space Center in nearby southern Mississippi. Following the 16-month campaign, Core Stage-1 was transported to Kennedy Space Center (KSC) in late April 2021.

For Core Stage-2, production has not been the critical path item for Artemis 2 launch integration. When the stage is completed, there will be no Green Run or acceptance test firing to perform at Stennis, so the stage will be shipped directly from MAF to KSC.

If the stage were to arrive at Kennedy in Florida in the early Spring of 2023, it may have a long stay in the Vehicle Assembly Building (VAB) Transfer Aisle waiting to be stacked for Artemis 2. The current official forecast for launch readiness for Artemis 2 is no earlier than May 2024, but that forecast will likely need to be re-evaluated when Artemis 1 finally launches, which is currently targeting the end of August.

The Orion spacecraft for Artemis 2 will be reusing some avionics components from the returning Artemis 1 Crew Module, with a return from the Moon and splashdown for Artemis 1 currently no earlier than mid-October. The final assembly of the Artemis 2 Crew Module can’t be completed until after Artemis 1, which also pauses the schedule for the final assembly of the spacecraft and handover for launch processing. 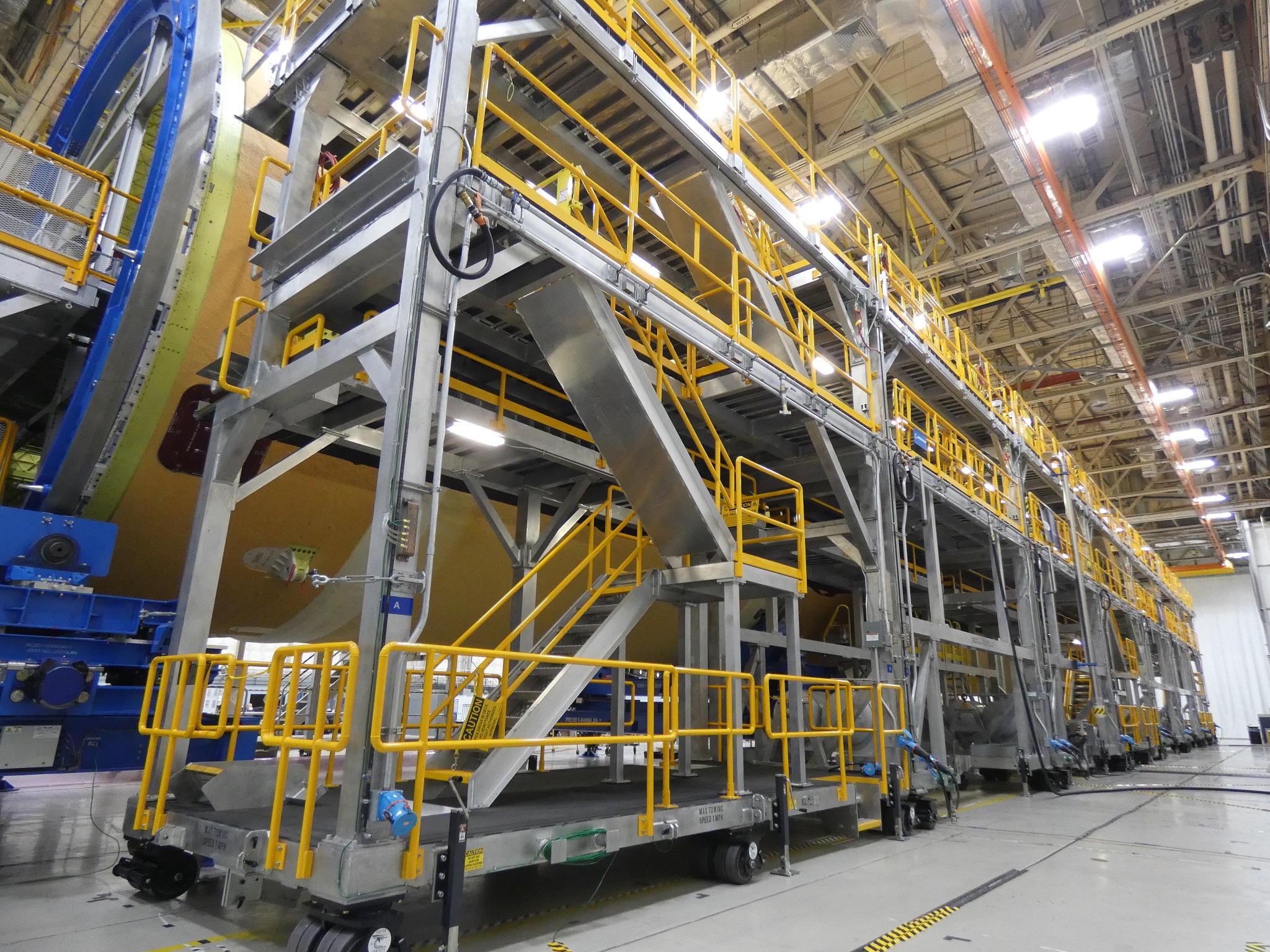 (Photo Caption: The forward end of the upper four-fifths of Core Stage-2 is seen at MAF on July 20. Movable work platforms obscure the -Z side of the stage, where the systems tunnel, pressurization lines, and one of the LOX feedlines run along the exterior of the stage. The external platforms also provide a pathway to an access kit that is currently installed inside the intertank.)

Likewise, Mobile Launcher-1 needs a series of modifications for Artemis 2 that can’t begin until after Artemis 1 launches. It’s possible that Orion production and the Mobile Launcher modifications will be in work through the first half of 2023 or longer, so it may be necessary to store Core Stage-2 somewhere for months before stacking of the Artemis 2 vehicle can begin.

The 10 motor segments of the SLS Solid Rocket Boosters (SRB) for Artemis 2 are already completed and currently remain in storage at their Northrop Grumman Promontory, Utah, production facility and delivery may again be on hold until closer to the planned launch readiness date. Even with that delay in shipping the SRB segments for Artemis 1, the Boosters have been stacked for much longer than their generic 12-month stack life limit.

If NASA wanted to stick with the generic analysis and avoid a long SRB stack life for the Artemis 2 vehicle, they may want to defer stacking the Boosters and shipment of the segments before that. A similar question may come up with Core Stage-2 — deliver it “in place” at MAF next March or ship it to Florida and garage it in the VAB Transfer Aisle?

Now that Core Stage-1 and the Artemis 1 vehicle are getting close to their first launch countdown, the need to use Core Stage-2 for spare parts should be concluded. “We’re pretty much done with giving Kennedy stuff; they’re wrapped up,” Eldridge said.

“We’ve given them a few parts but [we’re] hoping, cross our fingers, they’re done with it,” Burroughs added. 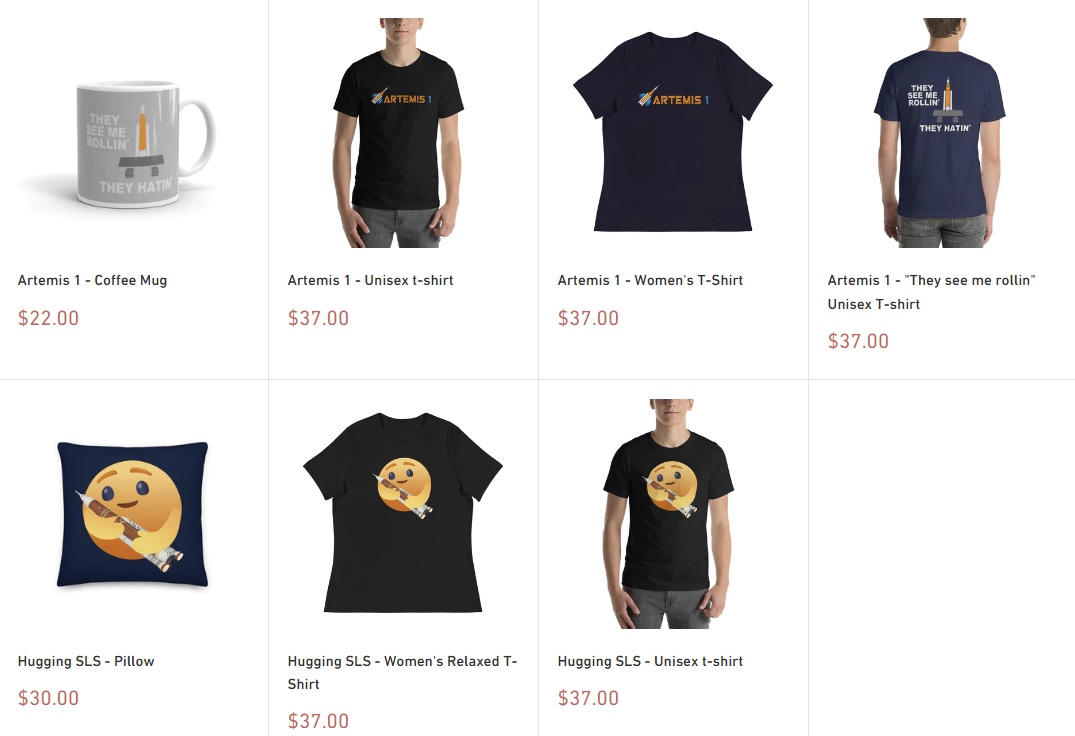