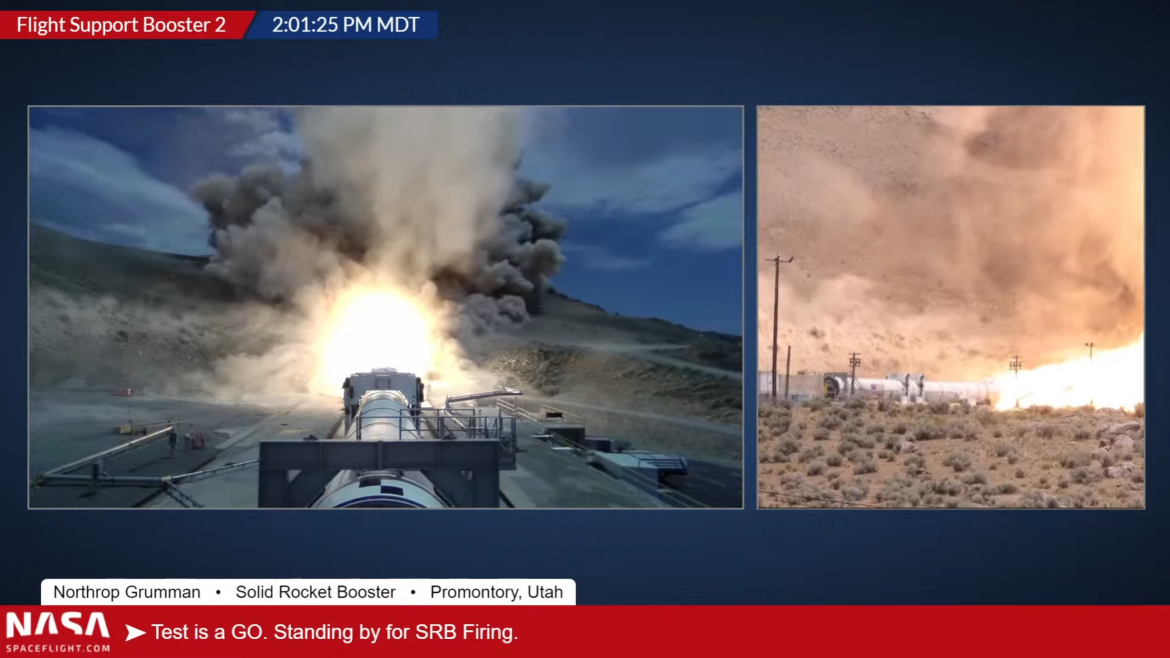 As the Space Launch System (SLS) rocket prepares for its first flight as soon as late August, Northrop Grumman conducted the program’s Flight Support Booster-2 test firing on Thursday at its facility in Promontory, Utah.

The Flight Support Booster-2 test is part of an ongoing program to ensure the continued safety and flight-worthiness of the large solid rocket boosters (SRBs) that will provide 75% of the SLS system’s total thrust through its first two minutes of flight. 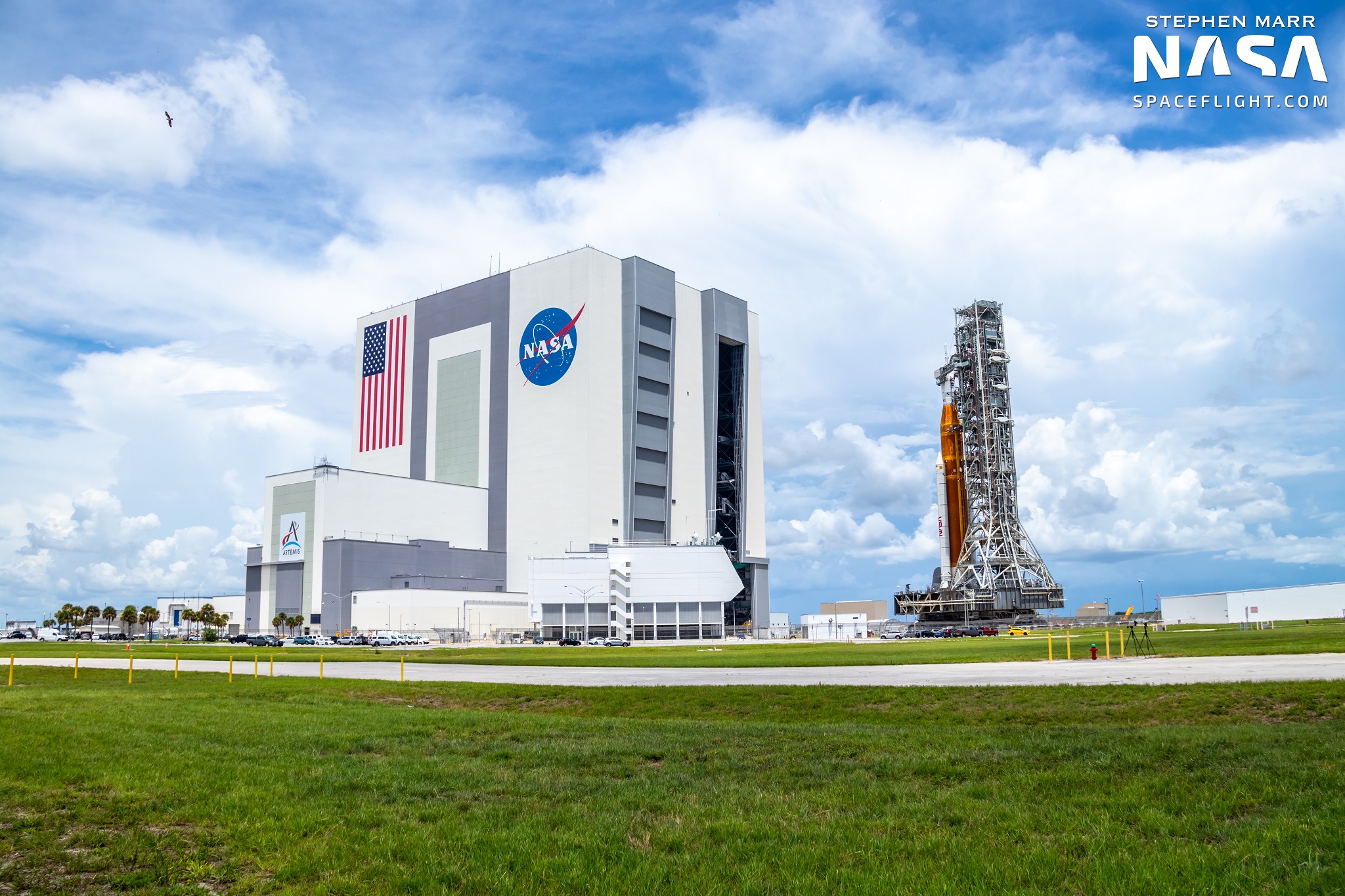 Artemis I SLS rolls back to the VAB for final launch preparations after the completion of its Wet Dress Rehearsal. (Credit: Stephen Marr for NSF)

These boosters were designed and built at the former Thiokol facility in Promontory. Via several name changes, splits, and merges, Northrop Grumman now owns the SRB system. Thiokol won the contract to build the Space Shuttle’s solid rocket boosters on November 20, 1973, and the Promontory facility has been designing, building, and testing some version of the SRB design ever since.

During the Space Shuttle program, Thiokol and its successors routinely conducted static test firings of its solid rockets to test manufacturing process quality, changes, and booster modifications. This was part of ensuring the continued safety of flight for the Shuttles. Overall, 52 full-scale static firings of the Shuttle solid rocket boosters took place between July 1977 and February 2010.

Northrop Grumman, who bought out Orbital ATK in 2018, continues these ground test firings for the SLS program. The SLS’s five-segment solid rocket booster underwent two qualification tests, the first in March 2015 and the second in June 2016.

Before the SLS program was officially started, the five-segment SRB concept was proven out with three development motor (DM) firings in 2009, 2010, and 2011. This development was part of the now-canceled Constellation program.

Those previous firings flight-qualified the five-segment SRB. Now, the Flight Support Booster (FDB) tests examine overall process quality, changes, and modifications. FSB-1 occurred on September 2, 2020, and tested a new cleaning solvent to be used on the booster nozzles and new materials and manufacturing processes to be used on future boosters.

This test also had the booster cooled to 15.5°C (60°F), which stressed the booster more than warmer temperatures did.

Unlike FSB-1, the FSB-2 booster was tested at ambient temperature.

Specifically, FSB-2 tested a newly qualified motor ignition system along with qualifying a new ablative nozzle lining. A new thrust vector control (TVC) system will also be tested, as part of early testing related to the Booster Obsolescence and Life Extension (BOLE) boosters that will go into service on the SLS Block 2 variant, planned to fly from Artemis IX onwards. 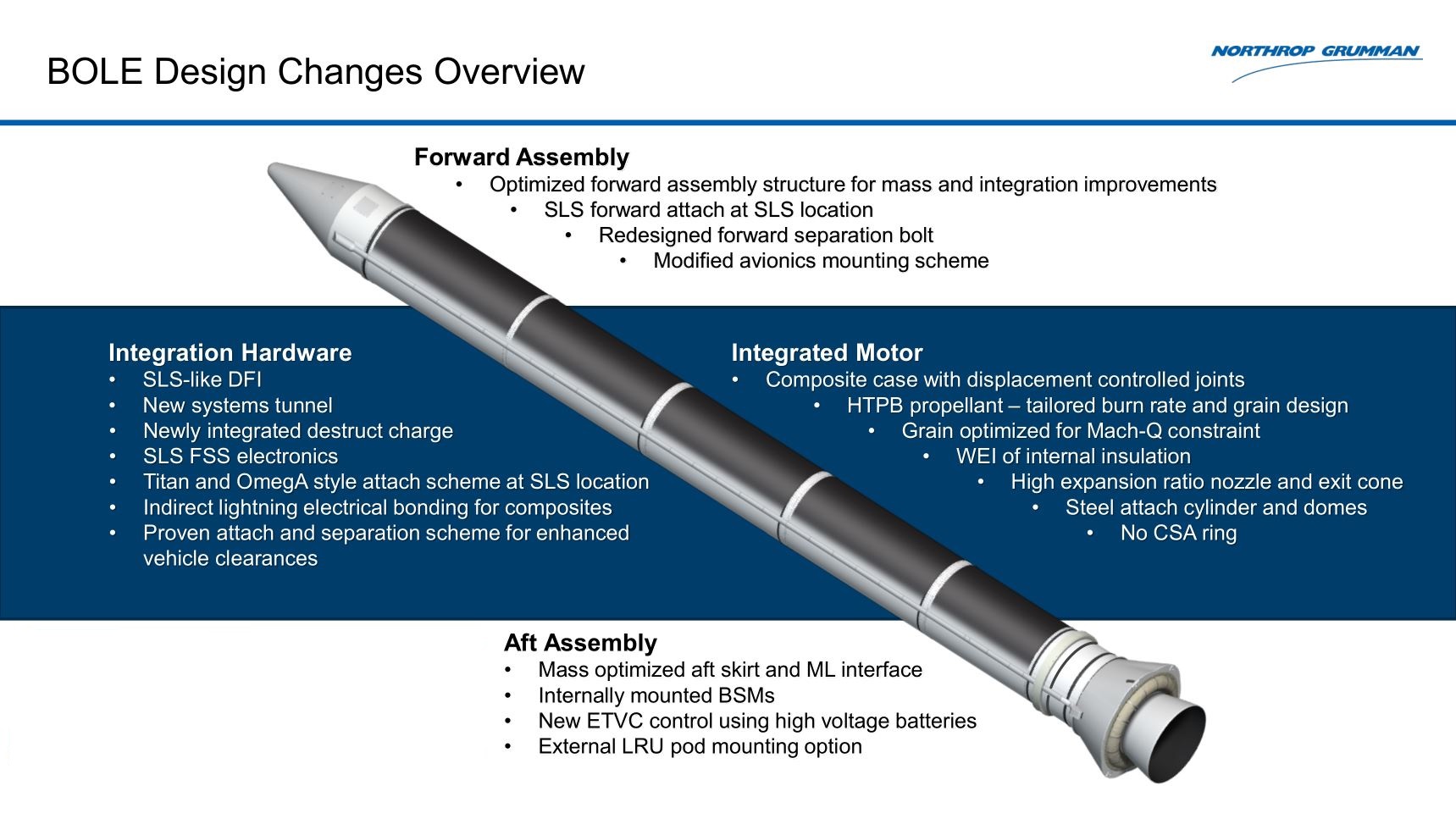 There are enough Shuttle-era SRB steel casings and other equipment for eight SLS flights; since the SLS SRBs will not be reused, new composite casings will be needed once the flight-heritage segments are used. The BOLE boosters will use the filament-wound casings to save mass.

The new boosters will also have an electric TVC system that will replace the current one that uses toxic hydrazine. This system was originally developed and tested for the now-canceled OmegA launch vehicle project. It is being tested on FSB-2.

The BOLE booster will also have a denser solid propellant mix, for additional fuel and increased chamber pressure within the same volume. This is enabled by the lighter composite cases. In addition, the BOLE booster’s “thrust trace” (how the propellant grain is shaped) will be optimized for the SLS as opposed to the current booster which was originally designed for the canceled Ares I launch vehicle.

For Thursday’s test, the FSB-2 booster was cast and produced on the same production line as the Artemis boosters, using the same methods and personnel. The booster’s propellant, a mixture of fuel and oxidizer particles combined into a substance with a rubber-like consistency, was cast in large mixers at the Promontory site.

The throat plug blasts free from Qualification Motor 2 during a static firing test of the five-segment SLS booster in June 2016. (Credit: Northrop Grumman)

The propellant is called polybutadiene acrylonitrile, or PBAN for short.

The steel SRB casings, which flew on Space Shuttle missions in the past, were cleaned and prepared to receive the propellant mixture, and the propellant was poured in and cured in a large autoclave. Once the segments were finished, they were stored until Northrop Grumman was ready to “stack” them for the test.

The booster was assembled horizontally (instead of vertically when they are stacked for launch) in a building at the test stand and readied for the FSB-2 test, with hundreds of channels of telemetry available to record data and parameters.

A siren sounded at T-1 minute to warn all nearby personnel, and at T-0, the booster will be fired in a horizontal position with the plume climbing up a hillside.

Temperatures at the test area turn nearby soil into glass.

The FSB-2 booster fired for its full duration of just over two minutes, with a maximum thrust of 3.6 million pounds. After the booster burnt out, a carbon dioxide system quenched the fire to preserve the state of the booster, and the test data was evaluated.

NG classed the test as a success several hours later.

“Continuous product improvements and obsolescence mitigation helps NASA achieve its long-term mission to utilize SLS for its Artemis program,” said Wendy Williams, vice president, propulsion systems, Northrop Grumman. “This opportunity for early learning on next-generation systems will help us develop an enhanced booster that is ready to support the greater payload demands of the SLS rocket through 2031.”

FSB-2 was the seventh five-segment Reusable Solid Rocket Motor V (RSRMV) booster to be test fired at Promontory. The series of Flight Support Booster test firings, as well as BOLE development and qualification motor tests, will continue through this decade.

(Lead image: The five-segment SRB for the FSB-2 test in the firing stand in Utah. Credit: Northrop Grumman )