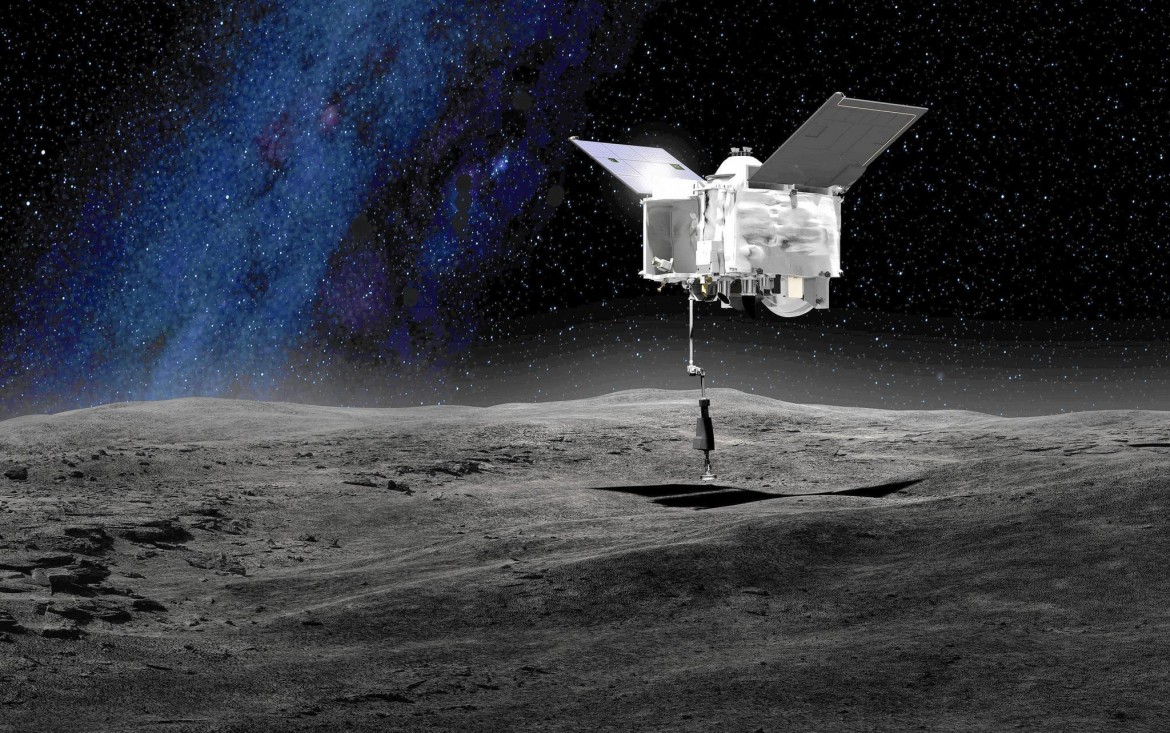 Recently analyzed data from an asteroid surface-sample collection performed by NASA’s OSIRIS-REx mission has revealed that asteroid 101955 Bennu’s surface regolith is much looser than previously thought. Had OSIRIS-REx not fired its thrusters to back away from Bennu after collecting its sample, the spacecraft likely would’ve sunk straight into Bennu’s surface.

What’s more, additional data from OSIRIS-REx’s sample collection revealed that surface regeneration occurs much quicker on asteroids than on Earth.

Since its sample collection, OSIRIS-REx has left Bennu and is currently en route to Earth. Just before it flies by Earth, it will release the sample capsule into the atmosphere for retrieval by NASA teams following a touchdown at the Utah Test and Training Range in the United States.  However, scientists have been continuously analyzing the data collected by OSIRIS-REx during the sample collection procedure.

In a new study led by OSIRIS-REx principal investigator Dante Lauretta, scientists have discovered that the outer particles of Bennu’s surface are extremely loose and lightly bound, so much so that if a person were to step onto Bennu’s surface, they would feel little to no resistance and sink into the asteroid’s surface — similar to a plastic ball pit on Earth.

“If Bennu was completely packed, that would imply nearly solid rock, but we found a lot of void space in the surface,” said OSIRIS-REx scientist Kevin Walsh of the Southwest Research Institute in San Antonio, Texas.

Furthermore — to the surprise of the OSIRIS-REx team — if the probe had not fired its thrusters to back away from Bennu after collecting the surface sample, it likely would have continued sinking into Bennu’s surface until it hit a compact object.

The effect of OSIRIS-REx’s sample collection on Bennu’s surface was also clearly seen in up-close imagery of Bennu’s surface taken by the spacecraft after collecting its sample.

“What we saw was a huge wall of debris radiating out from the sample site,” Lauretta said.

The wall of debris created by the spacecraft was larger than expected and had an unusually high abundance of pebbles and other surface regolith, especially since OSIRIS-REx barely tapped the surface. Additionally, a large eight-meter crater was left on Bennu’s surface from the sample collection. This observation was quite bizarre to OSIRIS-REx teams, as every time they had tested the sampling system on Earth, the spacecraft barely made a divot in the testing area.

“Every time we tested the sample pickup procedure in the lab, we barely made a divot,” Lauretta said.

“Our expectations about the asteroid’s surface were completely wrong. We were like, ‘Holy cow!’”

In order to gain a better understanding of the sample collection and what occurred on Bennu’s surface during the procedure, teams had OSIRIS-REx swing back around to the sample site to gather more imagery of the crater and surrounding areas.

Using images taken before and after the sample collection, scientists were able to determine the volume of debris at the impact site, named “Nightingale,” before and after OSIRIS-REx collected its surface sample. Scientists also analyzed acceleration data from the spacecraft during touchdown. The data showed that as OSIRIS-REx touched Bennu’s surface, it experienced very little amounts of resistance and was sinking into Bennu’s surface by the time the spacecraft fired its thrusters.

“By the time we fired our thrusters to leave the surface we were still plunging into the asteroid,” said mission scientist Ron Ballouz of the Johns Hopkins Applied Physics Laboratory in Laurel, Maryland.

Mission scientists continued to run hundreds of computer simulations based on OSIRIS-REx images and acceleration data to understand the density and cohesion of Bennu’s surface. Teams varied the surface cohesion in each simulation until they got a value that closely matched real-life data collected by OSIRIS-REx.

Having precise information on the cohesion and nature of Bennu’s surface allows scientists to better interpret asteroid observations, both from Earth and spacecraft. Additionally, the Bennu data could prove useful for developing upcoming missions to asteroids and methods to protect Earth from possible asteroid collisions. Loose asteroids like Bennu could pose a different kind of threat when entering Earth’s atmosphere than asteroids that are more solid.

“I think we’re still at the beginning of understanding what these bodies are, because they behave in very counterintuitive ways,” said OSIRIS-REx scientist Patrick Michel, director of research at the Centre National de la Recherche Scientifique at Côte d’Azur Observatory in Nice, France.

Lauretta et al.’s research on Bennu’s surface was released on July 7 in the journals Science and Science Advances.

The Lauretta et al. study isn’t the only recent study to use high-resolution up-close imagery from OSIRIS-REx to uncover the many secrets of asteroid evolution. A new study led by Marco Delbo of Université Côte d’Azur, CNRS, Observatoire de la Côte d’Azur, Laboratoire Lagrange in Nice, France, has revealed that asteroids regenerate their surfaces much faster than Earth does — meaning asteroids “age” faster.

Using up-close imagery of the surface of Bennu, scientists were able to determine that the heat from the Sun can fracture rocks on Bennu’s surface in just 10,000 to 100,000 years — much quicker than scientists previously thought.

“We thought surface regeneration on asteroids took a few millions of years. We were surprised to learn that the aging and weathering process on asteroids happens so quickly, geologically speaking,” said Delbo.

Though jarring and enormous natural disasters — such as volcanic eruptions, landslides, and earthquakes — can rapidly change a landscape on Earth, widespread changes to Earth’s surface happen gradually, typically by wind, temperature changes, and water. These natural occurrences can change and shape Earth’s surface extensively over the course of a few million years as they erode surface layers gradually. A great example of this occurrence is the Grand Canyon in the United States, which was shaped, molded, and layered by flowing rivers and other bodies of water, meaning that its top layers are its youngest while its lowest layers are around 1.8 billion years old.

Some asteroids are aged early by the Sun, with surface rocks fracturing in just 10,000-100,000 years. Analysis of images from our #OSIRISREx mission revealed a weathering process that happens fast, geologically speaking: https://t.co/EupmNjFsKe pic.twitter.com/gFfkIhQXgV

On Bennu, quick temperature changes create internal stress, causing fractures to form in its surface rocks, leading to the rocks being broken down after further stress.

So just how quickly does the temperature change on Bennu?

When first investigating the OSIRIS-REx images of fractured rocks, Delbo et al. immediately noticed the temperature shock signature in the fractured rocks imaged by the spacecraft.

“A distinct signature that temperature shocks between the day and the night could be the cause (was seen in the rock images),” said Delbo.

Delbo et al. then measured the length and angles of more than 1,500 rock fractures in rocks seen in the OSIRIS-REx images. Interestingly, the size of the fractures varied immensely, with some being as small as a tennis racket and others being as large as a tennis court. The group of researchers found that the rock fractures mainly align in the northwest-southwest direction, which is a major indication that they were formed by the Sun’s heat — confirming that the Sun is a primary force in shaping the landscape of Bennu.

“If landslides or impacts were moving boulders faster than the boulders were cracking, the fractures would point in random directions,” said Delbo. 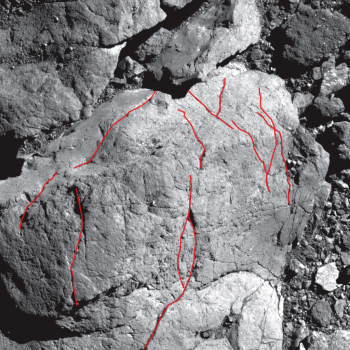 In this image from OSIRIS-REx, deep, dark, and long fractures can be seen in rocks, with some major fractures being outlined in red. (Credit: NASA/Goddard/University of Arizona)

“The thermal fractures on Bennu are quite similar to what we find on Earth and on Mars in terms of how they form. It is fascinating to see that they can exist and are similar in very ‘exotic’ physical conditions [low gravity, no atmosphere], even compared to Mars,” said co-author Christophe Matonti of Université Côte d’Azur, CNRS, Observatoire de la Côte d’Azur, Géoazur, Sophia-Antipolis, Valbonne, France.

Though new rocks and surface features form relatively quickly (geologically speaking), it’s important to remember just how old these asteroids are and why we study them.

“Keep in mind, the topography of Bennu is young, but the rocks on the asteroids are still billions of years old and hold valuable information about the beginning of the solar system,” said OSIRIS-REx mission scientist Jason Dworkin of NASA’s Goddard Space Flight Center in Greenbelt, Maryland.

Delbo et al.’s research was published in June in the journal Nature Geoscience.