SpaceX and NASA launch CRS-25 mission to the ISS 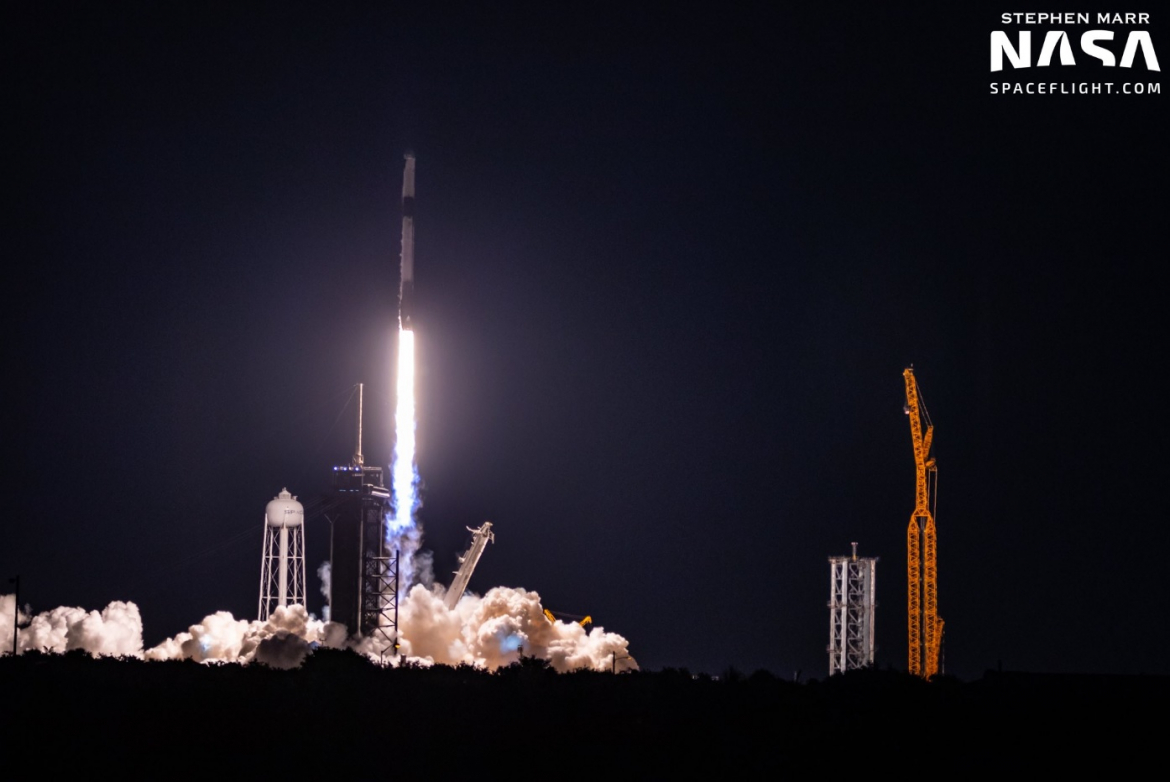 CRS-25 was the third Dragon mission, SpaceX’s second CRS mission, and the overall 30th launch of the year.

With 29 flights under SpaceX’s belt, 2022 continues to set new milestones and records for the company. Using flight-proven rockets, SpaceX has kept an impressive cadence of one launch every ~6.7 days. CRS-25 used a flight-proven Falcon 9 and Dragon spacecraft.

Twenty-seven of the 29 launches in 2022 have been flight-proven, and SpaceX will continue to use multiple flight-proven first stages to test the limits of the boosters. On Starlink Group 4-16, B1062-6 completed a turnaround record of 21 days. Recently on Starlink Group 4-19, B1060-13 became the first booster to support 13 missions.

First stage B1067-5 was used on this mission. B1067 previously supported SpaceX CRS-22, Crew-3, Türksat 5B, and most recently the Crew-4 mission. Supporting the CRS-25 mission, B1067 will have supported four NASA and Dragon 2 missions. This will tie with B1061 as the booster to support most NASA missions. 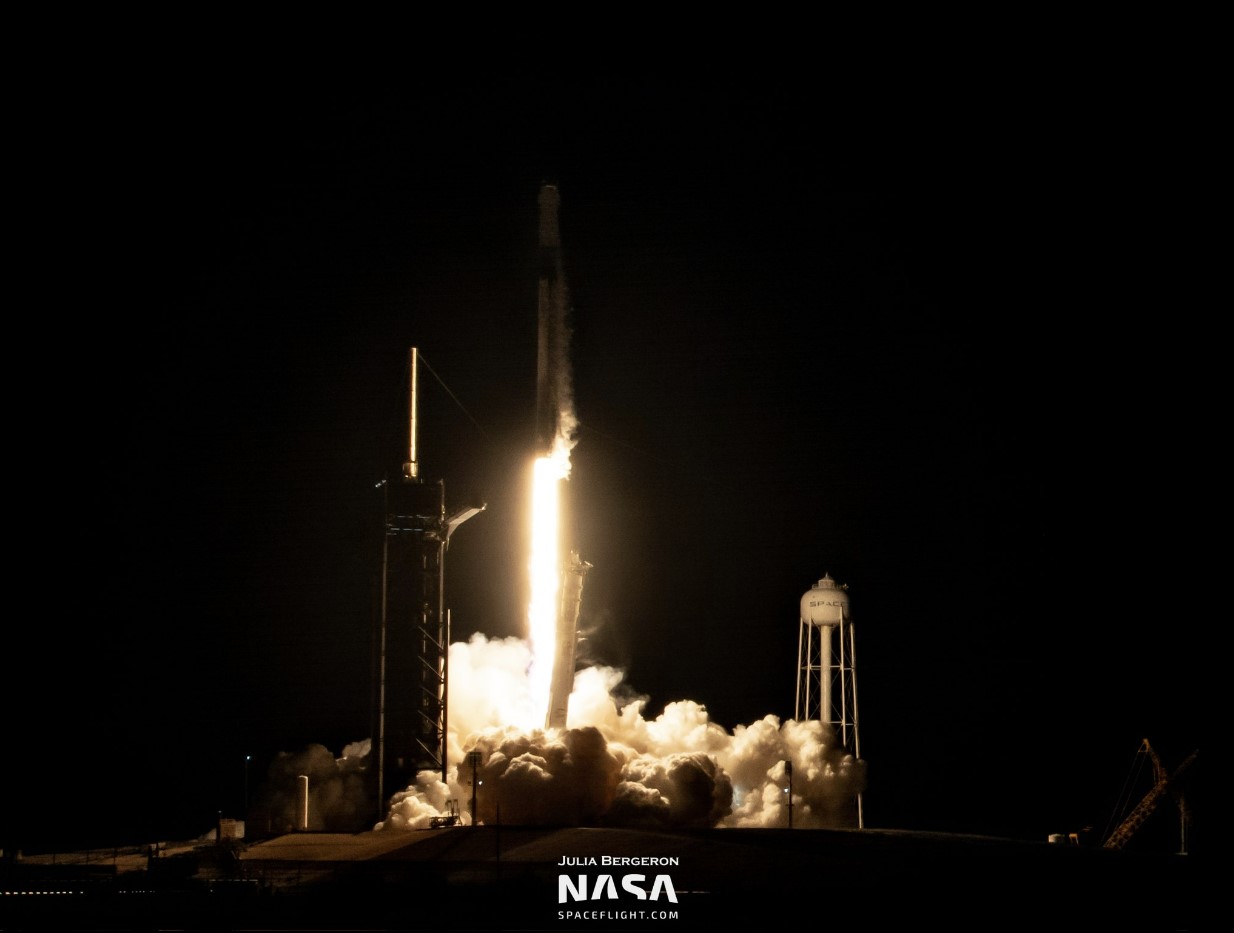 CRS-25 is the latest mission for the CRS program. Preparations began for this mission following C208’s return on the CRS-23 mission. After a month at the orbiting lab, C208 successfully splashed down in the Atlantic Ocean. It was recovered by SpaceX’s recovery vessel Megan and taken to Port Canaveral. From there, C208 was taken to be refurbished for the CRS-25 mission.

During final spacecraft processing, the CRS-25 mission was delayed due to a mono-methyl hydrazine (MMH) leak. This leak was found after teams found elevated MMH vapor readings in the Dragon’s propulsion system. After multiple checkouts, the source of the leak was found at a Draco thrust valve inlet joint. This component — as well as any other components that were degraded from the vapors — were replaced.

SpaceX also replaced the main parachutes to allow a more detailed off-vehicle inspection. Once the issues were fixed, the spacecraft once again entered final processing for launch.

On the CRS-25 mission, it carries two external payloads in its trunk to the ISS. Both were loaded into the trunk in May 2022. Once the capsule was refurbished, the trunk was installed onto Dragon.

EMIT has been loaded into the "trunk" that will travel aboard a SpaceX cargo resupply mission to the @Space_Station. The instrument will map Earth's arid dust source regions, gathering info about particle color & composition as it orbits Earth. pic.twitter.com/bm643dYfUE

B1067-5 began its preparations after it supported the Crew-4 mission. After landing on SpaceX’s drone ship A Shortfall of Gravitas (ASOG), it was taken to Port Canaveral. From there, it was moved to SpaceX’s HangarX facility at Robert’s Road to be refurbished. It was spotted heading to LC-39A in late-May 2022.

With about a week to go before launch, the completed Dragon was taken to the HIF at 39A. Then it was integrated with the second stage already attached to Falcon 9. With the Falcon 9 and Dragon integrated on the T/E, it was rolled out to the launch site on July 12.

To ensure there are no thermal shocks with the engines at ignition, the first stage began to chill its engines with liquid oxygen at T-7 minutes. The T/E retracted to the launch position of 88.2 degrees at T-4 minutes and 30 seconds.

At T-1 minute before launch, two key events took place: nthe Falcon 9 entered “startup” when the flight computer took over the countdown. At the same time, the Falcon 9 tanks began to pressurize to flight pressure. At 45 seconds before launch, the LD give the final Go for launch.

At T-3 seconds, the nine first-stage engines were commanded to ignite. A second later, the engines ignited and then began a final health check. Once the engines were verified to be healthy and producing full thrust, the hydraulic hold-down clamps and the T/E retracted, allowing liftoff. 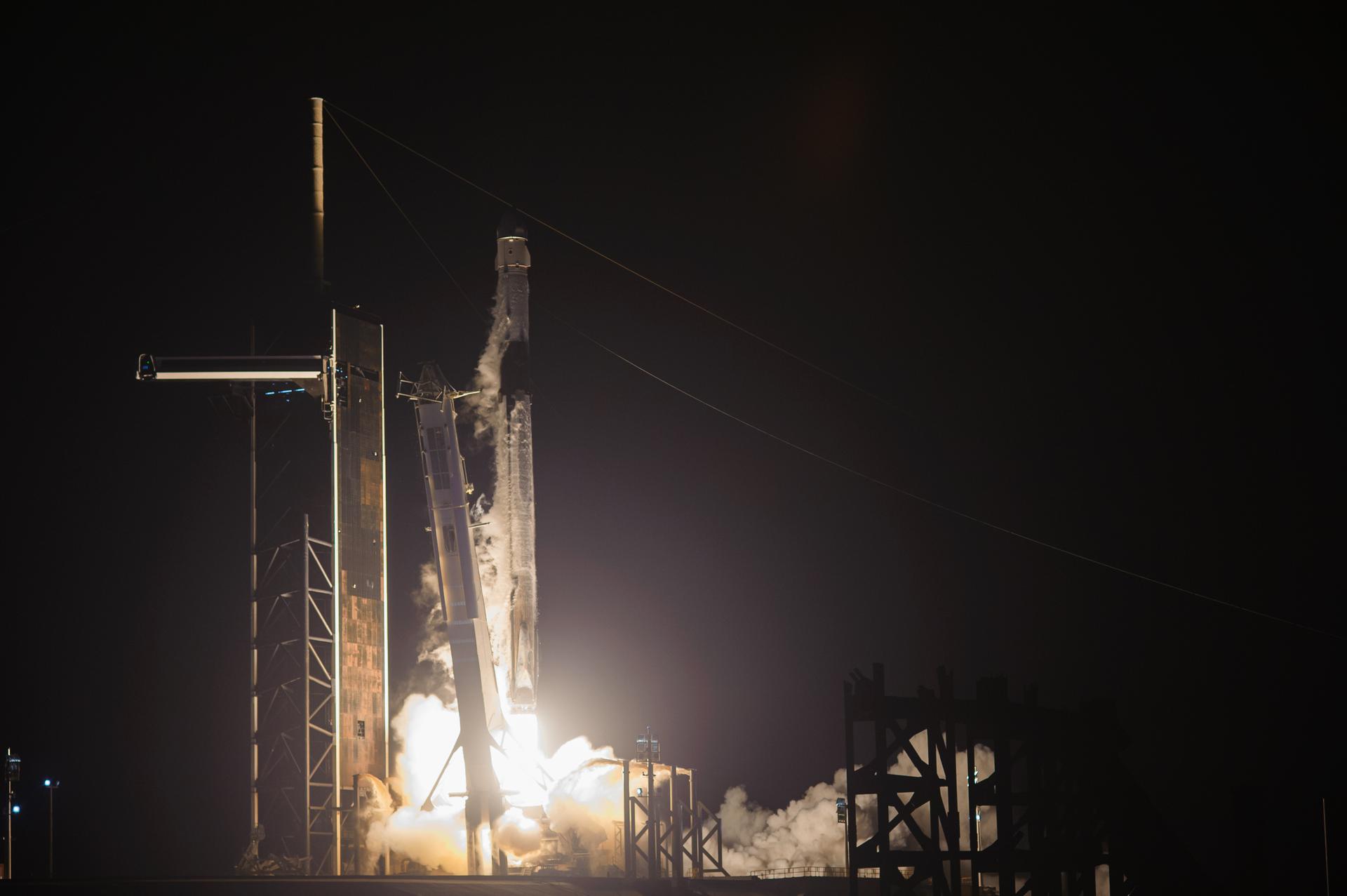 Shortly after liftoff, the Falcon 9 began a pitch maneuver to an azimuth to reach a 51.65-degree inclination. At one minute and 12-seconds into the flight, Falcon 9 reached Maximum Aerodynamic Pressure (Max-Q) where the aerodynamic forces were at their peak.

After burning for two minutes and 31 seconds, the nine first-stage engines shut down. Three seconds later, both stages separated with the MVac engine igniting a few seconds after that.

After coasting for three minutes, the first stage began a ~15-second, three-engine entry burn. This entry burn slowed the stage down to help protect it from the aerodynamic forces caused by entry. At T+7 minutes and 12 seconds, the first stage began a single-engine landing burn. This ~30-second burn slowed the stage to allow a gentle landing on ASOG.

Tbis was the 56th consecutive and the 130th overall landing of a Falcon 9 rocket and it continues SpaceX’s longest streak of consecutive landings since B1059’s failed landing during Starlink v1.0 L19 in February 2021. Now designated B1067-6, the first stage it will be taken back to Port Canaveral to be refurbished for a future mission.

After separating from the second stage, Dragon began its on-orbit checks and systems activation. Its nosecone was open to reveal the forward-facing Drago thrusters and docking port. Once Dragon is confirmed healthy in orbit, it will begin a series of orbital phasing burns to reach the ISS. 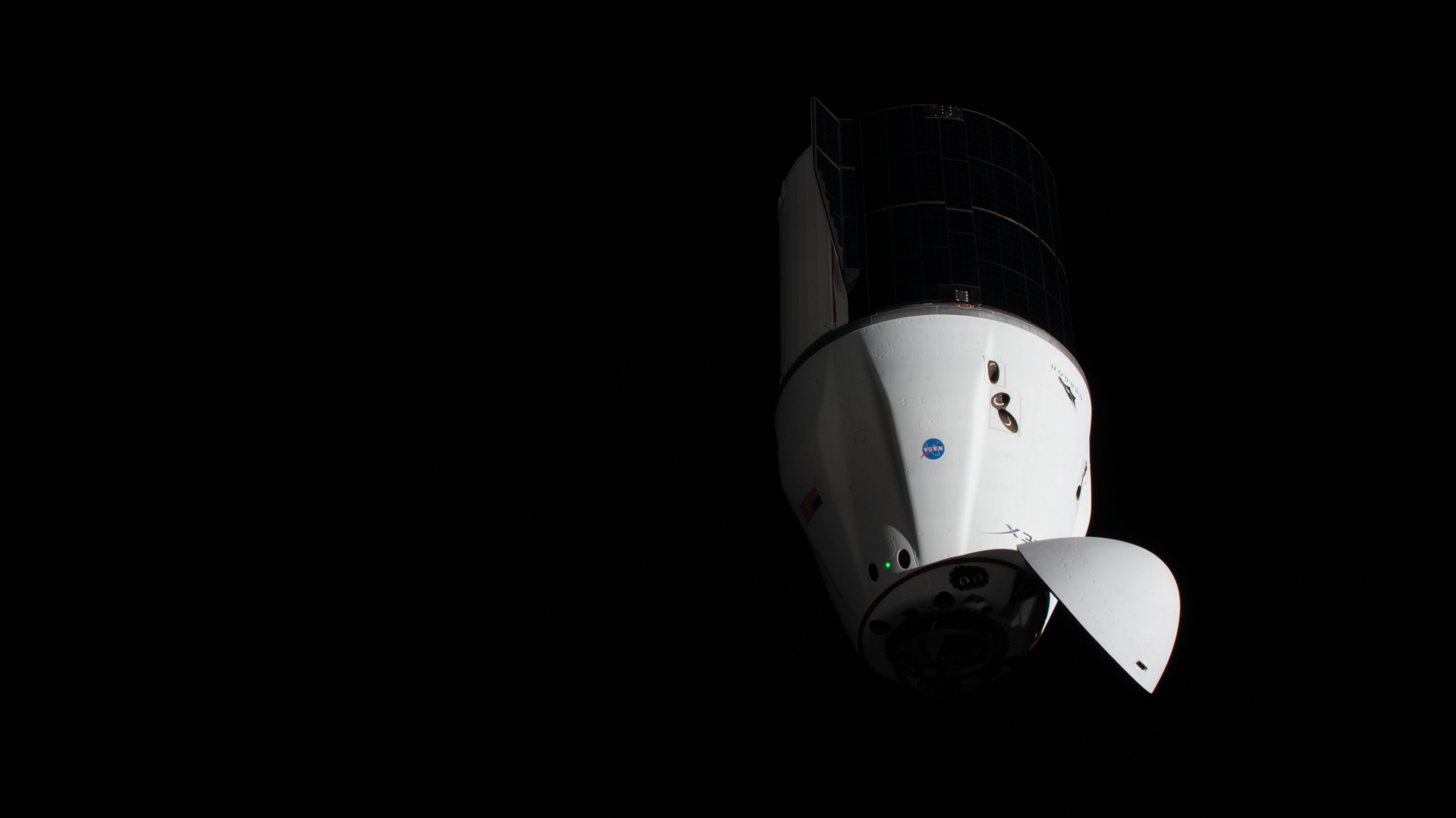 Now at the ISS, the crew will soon begin unloading the cargo from the Dragon. The cargo on Dragon includes science, supplies, and equipment for the ISS crews. The total mass of cargo on Dragon is ~2,630 kg of both pressurized and unpressurized cargo.

This mission will carry the Earth Surface Mineral Dust Source Investigation (EMIT) instrument developed by NASA’s Jet Propulsion Laboratory in Dragon’s trunk. EMIT will be used to measure the mineral composition of dust in Earth’s arid regions. This mineral dust can be blown into the air, and it can affect the climate, weather, vegetation, and more even at long distances.

EMIT will be placed on the exterior of the ISS. Over a year, EMIT will take photos to generate maps of mineral composition in the regions that produce dust.

A Battery Charge/Discharge Unit will also be carried in the trunk. This battery is a part of an investigation led by NASA’s Jet Propulsion Laboratory.

While not launched in the trunk, five CubeSats will be launched under the Educational Launch of Nanosatellites (ELaNa) 45 mission. The CubeSats were selected under NASA’s CubeSat Launch Initiative to provide low-cost access to space.

One CubeSat is the 3U BeaverCube developed by the Massachusetts Institute of Technology (MIT). BeaverCube will use multiple cameras to take images of the Earth’s oceans to detect the temperature of cloud tops and the ocean surface. This data will help understand the concentrations of phytoplankton.

The satellites will demonstrate the new Tiled Ionic Liquid Electrospray (TILE) 2 thruster. Learning how to use this new thruster will help future CubeSats maneuver while in space. TILE 2 will only weigh 0.5 kg with its delta-V at 10.1 m/s. BeaverCube will be deployed from a Poly-Picosatellite Orbital Deployer (P-POD) after arriving at the ISS.

Other CubeSats were developed by the Weiss School in Palm Beach Gardens, NASA’s Ames Research Center, Embry-Riddle Aeronautical University, and the University of South Alabama.

Multiple other educational institutes will have their scientific investigations on CRS-25. One study by the University of California at San Francisco is looking at the effects of aging while in microgravity. Aging is associated with changes in the immune response which is known as immunosenescence. The immunosenescence investigation will use tissue chips to study the effects of immune functions during flight and whether immune cells recover post-flight. 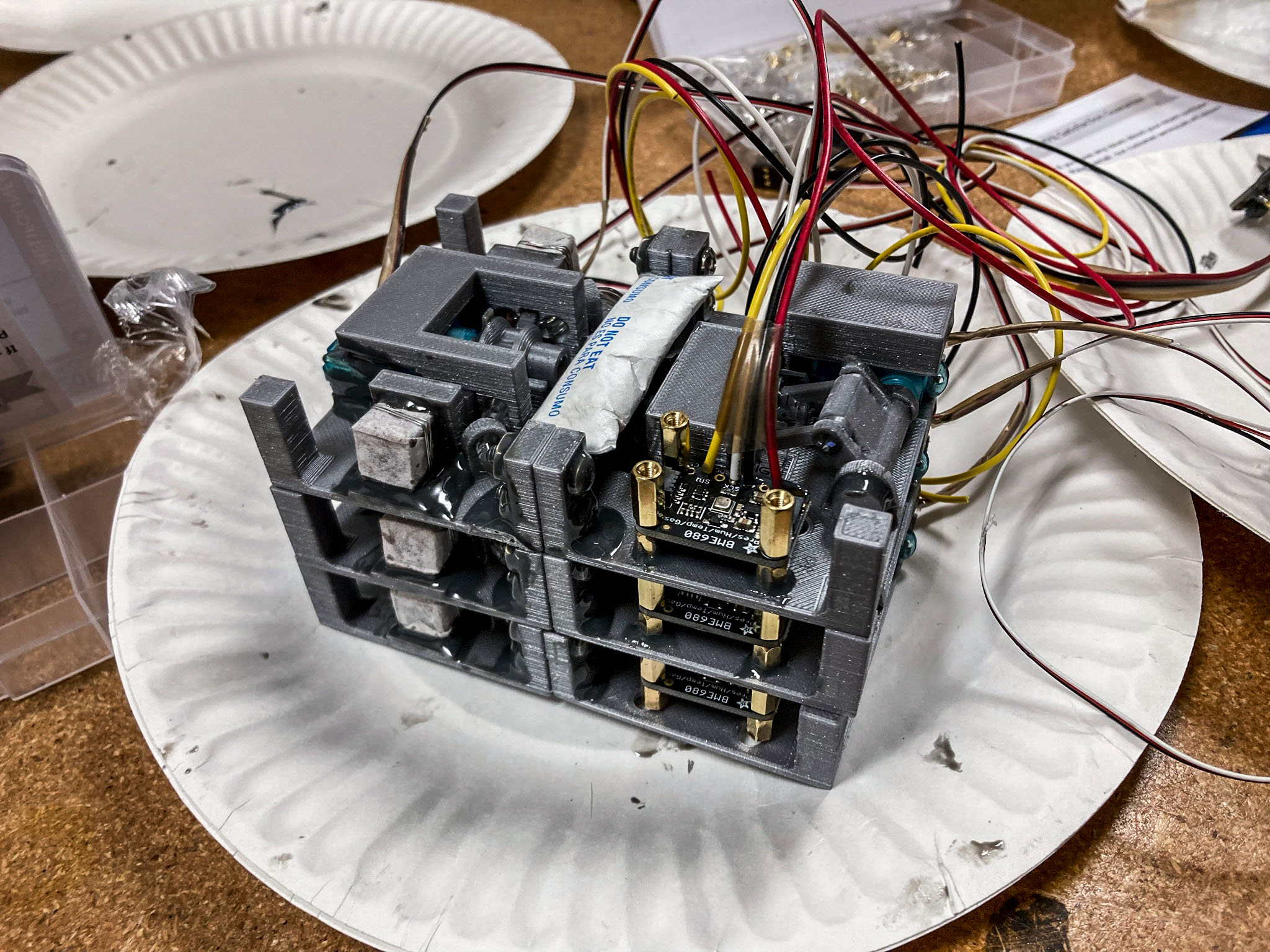 The Biopolymer Research of In-Situ Capabilities is an experiment developed by Nanoracks and Stanford University. This research will be used to determine how microgravity affects the process of creating biopolymer soil composite (BSC). BSC, a concrete alternative made of organic compound and silica, will one day be used to create habitats on other planets. During the investigation in space, small bricks will be made using a Nanoracks platform and will be studied to determine their relative strength.

Developed by the Pacific Northwest National Laboratory and KSC, the Dynamics of the Microbiome in Space (DynaMoS) is a study on how microgravity affects the metabolic interactions in communities of soil microbes. On Earth, microorganisms conduct key functions in the soil. This research on the communities that decompose chitin will improve the understanding of microorganisms in space.

In partnership with Amplyus, Harvard Medical, and Boeing, the Genes in Space-9 is a platform for protein production that doesn’t include living cells. Cell-free protein production and biosensors will detect specific target molecules. This technology could provide portable, low-resource, and low-cost tools for potential medical applications.

Genes in Space-9 is a student-designed experiment launches to the @Space_Station this Thursday, 7/14, on SpaceX CRS-25. The study aims to demonstrate cell-free protein production in microgravity. https://t.co/p3ujuxFIeL pic.twitter.com/cgC7qAWxiP

The science on this mission will help our understanding of the effects in space/microgravity. However, the cargo on the CRS-25 is also not only science. It will also include fresh food, equipment for the ISS, and any clothing for the crew.

August is another busy month with more Starlink and commercial missions. On August 2, 2022, a flight-proven Falcon 9 will launch the South Korean Danuri (KPLO) lunar orbiter on a trek to the Moon.